A brief history of radio in Greece, and a small museum in the Peloponnese 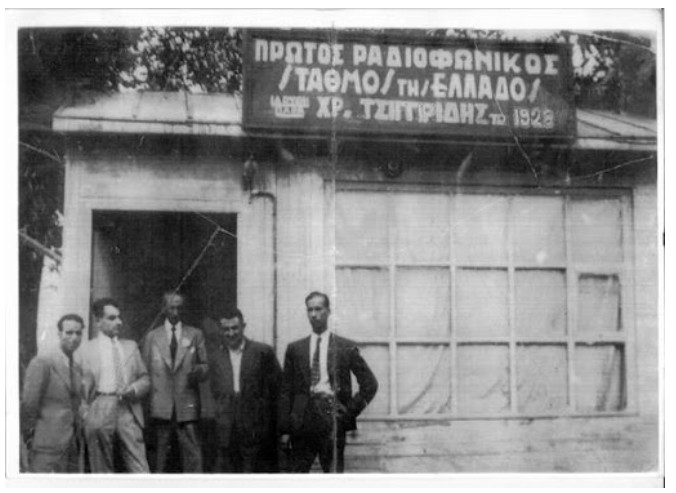 Our sister publication GrèceHebdo* reviews the history of radio in Greece on the occasion of a visit to the Museum of Radio established in 2018 in the small city of Amaliada (Peloponnese), guided by its founder, Spyros Beratis.

The birth of radio in the world: key dates

The invention of the radio was the result of a long series of technological breakthroughs that began with the discovery of electromagnetic energy and the invention of telegraphy. It was
Samuel Morse with his assistant Alfred Vail that invented the telegraph in 1841, giving people the possibility to transmit messages using a simple and practical communication system: the Morse Code. In 1889 Nikola Tesla made a high-frequency generator (15 kHz) and in 1893 he experimented with the first radio communication.

After several experimental broadcasts around the world, Guglielmo Marconi, considered one of the inventors of wireless radio and telegraphy, opened in 1898 the world's first radio manufacturing plant in Chelmsford, England, and in 1901, the first transatlantic radio link between Newfoundland and Cornwall. On Christmas Eve, 1906, Canadian Reginald Aubrey Fessenden (1866-1932) broadcast the first music and voice programme transmitted over long distances. 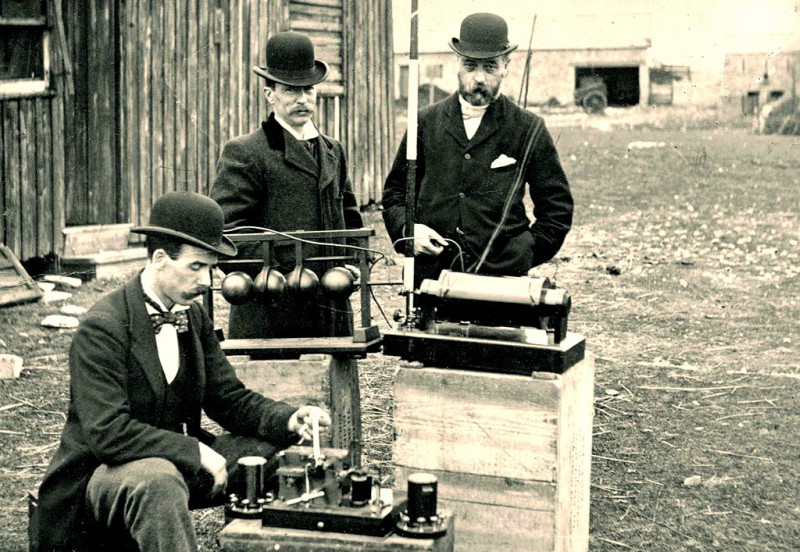 British Post Office engineers inspect Guglielmo Marconi's wireless telegraphy equipment, during a demonstration, 13 May 1897. This was the world's first demonstration of the transmission of radio signals over open sea. Source: WikiCommons

In 1914, under the rise of King Albert I, Belgium was the first country to broadcast a regular radio show for the general public every Saturday. The station was blown up on the King's orders at the start of the Great War, in August, so that the Germans wouldn’t get a hold of it. Wireless transmission soon proved of great value to military operations during the First World War (1914-1918). The end of the war opened the way for the commercial use of the radio, but it wasn’t until the 1920 and 1930 that the first radio stations for the general public appeared worldwide, with the first being Radio Eiffel Tower in 1921. 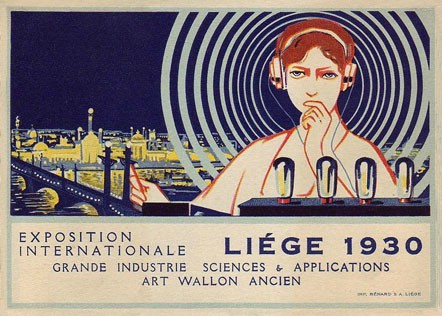 Greece: back to the origins

Radio was introduced to Greece in the 1920s, in the form of experimental broadcasts. The Ministry for Naval Affairs, which was responsible for broadcasting between 1921 and 1926, issued transmission licenses on the condition that an internal antenna be installed.

The first station broadcasting regular programmes was founded in Thessaloniki in 1926 by Christos Tsigiridis, who had lived in Germany for several years and had studied electronics at the University of Stuttgart. In 1929, the government of Eleftherios Venizelos began efforts to spread radio technological.

In 1935, the totalitarian regime of Ioannis Metaxas established a state-owned public broadcaster in cooperation with the German phone company Telefunken. For Metaxas, the creation of this network was not just a matter of national pride, but also a means of "educating" Greek society. Besides, Metaxas was inspired by Nazi Germany, which had invested a lot in the use of radio as a means of propaganda, as well as fascist Italy, which had founded in 1927 the public service broadcaster that was to become RAI (Radio Audizioni Italiane) in 1944.

The birth of public radio officially took place in November 1935 with the law 19 / 20.11.1935 which established the Radio Broadcasting Service. On 25 March 1938, Greece’s national holiday, the new public radio station was inaugurated by King George II, initially limited to radio services from Athens, with the Athens Radio Station based in the Zappeion. The station's complete programme is presented on 21 May 1938.

During the Greco-Italian war, the radio broadcast information regarding the armed conflicts; during the Axis occupation however, the public radio passed under the control the Nazi forces as the Limited Hellenic Radio Company. 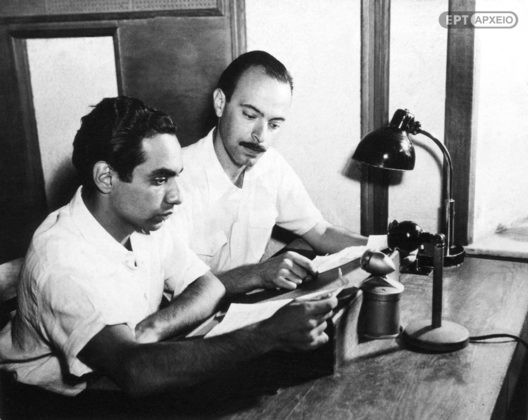 After the liberation of Athens on 12 October 1944 and from 1945, the Greek government decided to reorganise and expand radio broadcasting. Law 1775/1945 established the National Radio Foundation (EIR) while Law 968/1949 established the central radio station of the Greek armed forces; during this time, there is also an increasingly number of private radio stations.

In 1950, EIR is one of the 23 founding organisations of the European Broadcasting Union. The first test television transmissions were broadcast in 1960, and the first Greek-language television channel was launched on 23 February 1966. 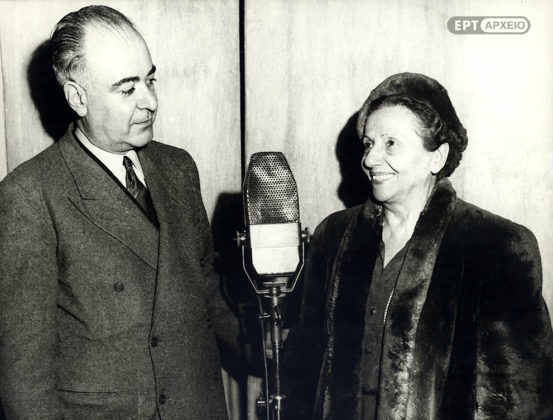 Actors Achilleas Mamakis and Marika Kotopouli at the Zappeion, from where the radio show "Theatre at the microphone" was broadcast in the 50’s. Source: ERT Archives

The Amaliada Radio Museum: a guided tour by its founder, Spyros Beratis

Our sister publication GrèceHebdo visited the Amaliada Radio Museum (Peloponnese) under the guide of its founder, Spyros Beratis, who had launched one of Greece’s first radio stations of national range, in 1952.

Spyros Beratis, born in 1933, studied Electrical Engineering in Athens and has been an avid radio set collector since a young age. Following a first attempt in Chalkis (Euboea), in 1952 he managed to establish, with his own resources, the station "Edo Amaliada” (Amaliada Speaking).

The radio station, which is still in operation, was licenced by the Foundation of the Hellenic Radio (EIR) in 1959, and in 1993 it went under the auspices of the Amaliada municipality. In February 2018, the radio museum opened in the small town of Peloponnese thanks to the efforts of Spyros Beratis, who donated his large collection to the museum. 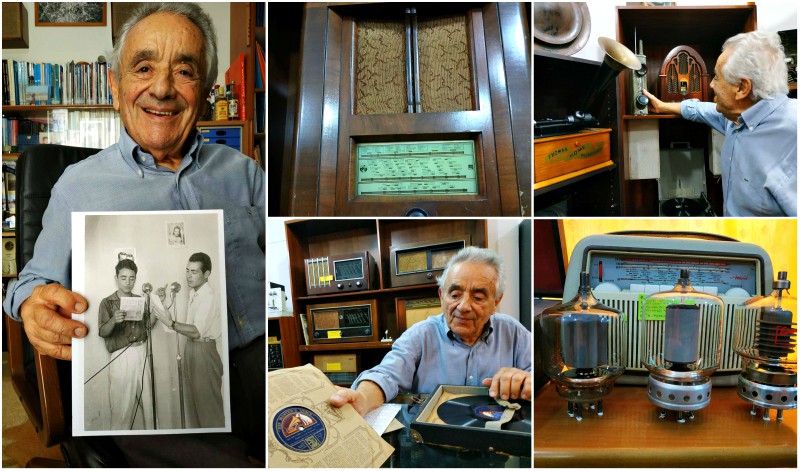 Zaharopoulos Thimios, The Evolution of Public Service Radio Broadcasting in Greece: From Authoritarianism to Anarchy and Irrelevance [pdf]