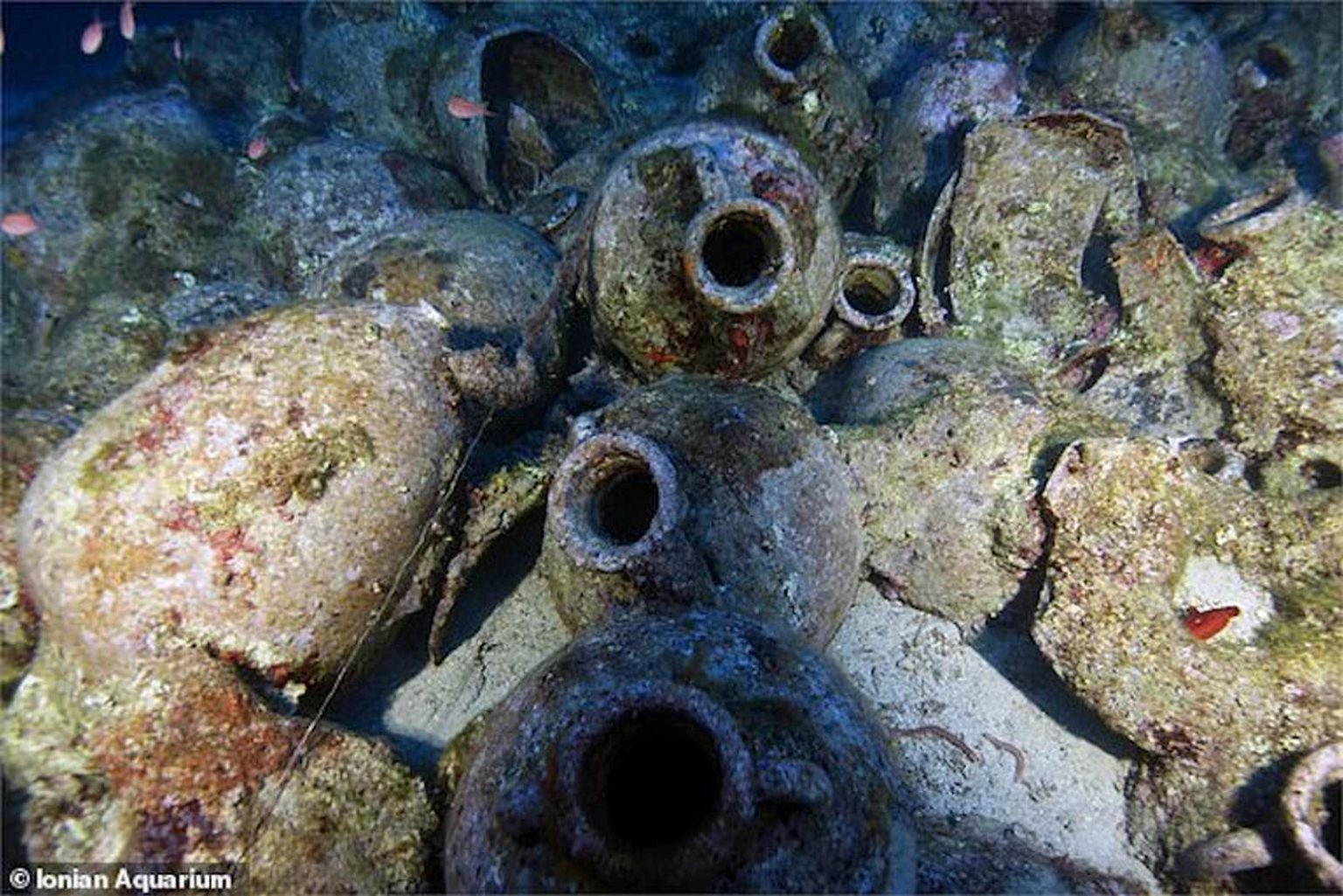 In 2013, during an underwater natural and cultural heritage assessment survey, researchers discovered one of the largest Roman-era shipwrecks ever found, with a cargo of about 6,000 amphorae. The survey was carried out by the Oceanus network of the University of Patras, using artificial intelligence image-processing techniques. The 110-foot-long vessel was located at the northeastern tip of the island of Kefalonia, close to the entrance to the Fiscardo embayment, and has thus been dubbed "the Fiscardo wreck".

Dr. George Ferentinos, Emeritus Professor of Geology at the Laboratory of Marine Geology and Physical Oceanography, University of Patras, along with nine of his fellow academics, unveiled the discovery in the Journal of Archaeological Science in January 2020. Greek News Agenda publishes extracts from their article, courtesy of Dr. Ferentinos.

The largest Roman shipwreck found to date in the eastern Mediterranean.

An offshore survey around Kefallinia Island in the Ionian Sea funded by the INTERREG IV Greece-Italy 2007-2013 Programme for the promotion and protection of our cultural heritage has shown among other shipwrecks, the presence of a significant Roman period (1st BC to 1st AD) merchant shipwreck. The survey, carried out by the OCEANUS Network of the University of Patras, using state of art high resolution underwater sonar remote sensing (Fig. 1a) and machine learning (artificial intelligence) purpose made techniques in processing seafloor sonar images for automated recognition of ancient wrecks with an amphorae cargo and separation from other seafloor features with similar sonic signatures.

The shipwreck, based on the sonar images (Fig. 1b, c), is about 34 m. long, 12 m. wide, and 3.3 m. high. The size of this merchant shipwreck is much larger than those, approximately 15 m long that sailed around the Mediterranean between 1st BC and 1st AD, transporting goods within the Roman Empire. The shipwreck dimensions make it one of the four largest merchant shipwrecks of the above-mentioned period, found in the Mediterranean to date. The other three wrecks with an estimated length of about 40m were the ‘Madrague de Giens’ (1st cent. BC), the ‘Albenga’ (1st cent. BC) and the ‘Machdia’ (1st cent. BC), which lie in the western Mediterranean Sea, off the Madrague de Giens cape near Toulon in France, in Genoa Bay in Italy and in Tunisia, respectively. Ships of this size were carrying cargo of about 400 tons with an estimated capacity of between 6,000 and 8,000 amphorae.

The amphorae cargo in the hull is about 3,3 m. high, of which 1,3 m above seafloor and 2 m. sunk in the seafloor. The amphorae are in very good state of preservation (Fig. 2), and about 0.90 m. long and 0.40 m. wide (Fig. 3). Taking into consideration the size of the ship and amphorae and their storage in the hull, the ship is estimated to have been carrying about 6.000 amphorae in five layers. The amphorae were likely carrying wine, olive oil, grains and other foodstuffs

"The outline of the amphorae on the seafloor resembles the outline of ships at that period (Fig. 4), this indicates that the cargo has kept the outline of the ship suggesting that the ship sank very slowly in an upright position and came to rest on its keel and then gradually tipped in the one side with the hull keeping its overall structure. Therefore, it may-be assumed that the ship did not sink due to stormy weather but probably due to amphorae shifting in the hull."

The presence of four roman period shipwrecks dated between 1st B.C. and 1st A.D. century along the Ionian Islands suggest that the eastern Ionian Sea was part of an important trading route ferrying goods from the Levant and Asia Minor to the Adriatic Roman provinces and Rome. This further support the view put forward by H. Warnacke (1987) that Apostle Paul on his way to Rome from Palestine at 59 A.D. was not shipwrecked and confined in Malta for three months but in Kefallinia Island, which that time was called Meliti. Malta was also called Meliti at that time. After staying for three months in Kefallinia Apostle Paul continued his voyage to Rome boarded to an Alexandrian vessel, probably from the present day Fiscardo fishing harbour, which that time was an important Roman port.

The shipwreck is considered of significant archaeological importance as with further detailed research, it has the potential of yielding a wealth of information about shipping routes, trading goods, amphorae hull stowage, ship construction, the type of wood used and its source.

For more information about the Fiscardo wreck and other wrecks in the area visit our website www.ionian-aquarium.com 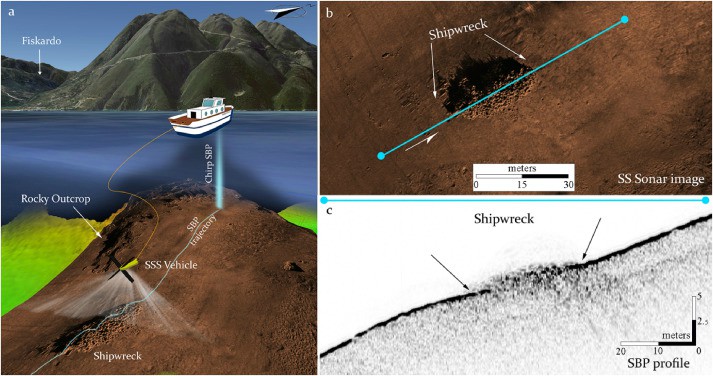 Fig. 1 (a) Schematic presentation showing the SSS and Chirp SBP basic operation principal. The SSS transmits high frequency sound pulses in a vertically wide fan shape from a moving vessel, which scans the seafloor. The Chirp SBP emits a narrow acoustic beam, which penetrates the layers beneath the seafloor. (b) The reflected SSS pulses from the seafloor are recorded and processed to produce a perspective image of the seafloor with the shipwreck lying on it. (c) The reflected SBP acoustic pulses from the seabed and the deeper layers are recorded and processed to produce a vertical plane section of the seabed with the shipwreck half buried into the upper sandy layer (yellow). 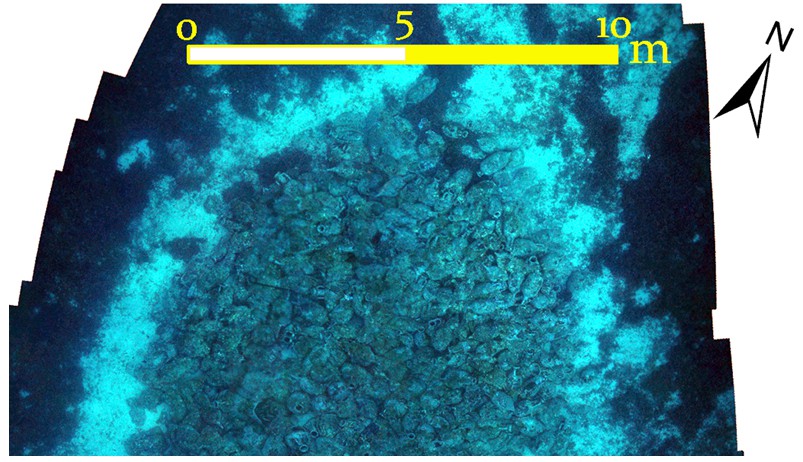 Fig. 2 Part of the orthophoto mosaic of the Fiskardo shipwreck showing the good condition of the amphorae cargo. 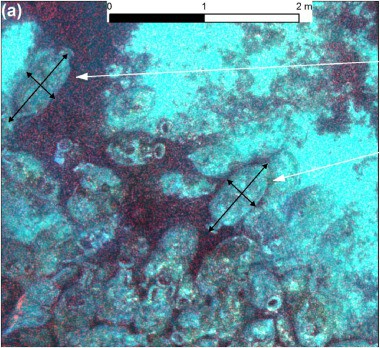 Fig. 3 Expanded portion of the “Fiscardo” wreck orthophoto mosaic showing the size of the amphorae. 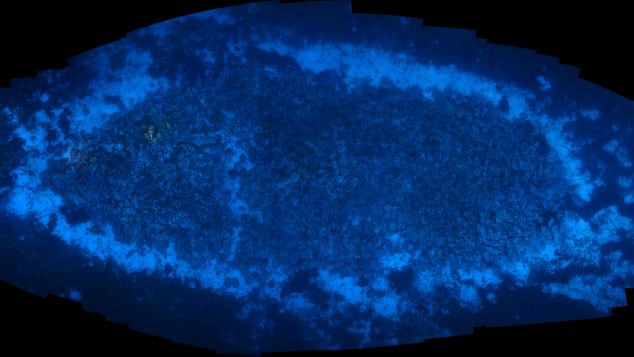 Fig. 4 Orthophoto-mosaic showing that the outline of the amphorae cargo on the seafloor resembles the outline of ships at that period. The trench-like zone about 1 m wide, empty of amphorae, running across the cargo apparently resulted from a vessel dragging its anchor over the seafloor.