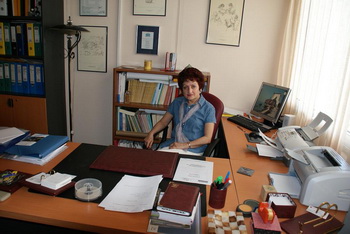 Angela Ralli is Professor of General Linguistics at the Department of Philology of the University of Patras and director of the Laboratory of Modern Greek Dialects. Since 2013, she is an ordinary member of the Academia Europaea. Professor Ralli completed her undergraduate and postgraduate studies at the University of Montreal, where she also received her Phd. Her main area of expertise is theoretical morphology, particularly Greek morphology and its dialectal variation. Angela Ralli is particularly active in the field of preserving language heritage. In this framework, she has conducted research expeditions to South Italy, Pontus, Cappadocia, Cunda (former Moschonisi) and Aivali (today's Ayvalik) and has documented linguistic systems which are on the way to extinction. More recently, Professor Ralli received a Niarchos foundation grant (New York branch) to investigate and document the history and language of Greek immigrants in Canada, in collaboration with colleagues from three Canadian Universities, McGill, York and Simon Fraser. This led to the research project IMMIGREC and a virtual museum on Greek migration to Canada of the same name. Greek News Agenda* had the opportunity to interview Professor Ralli on IMMIGREC, as well as current linguistic developments among Greek-Canadians.

The IMMIGREC project is an ambitious collective effort with multiple goals that brought together four universities, three Canadian and a Greek one. Could you provide us with a brief overview of the project, its implementation, as well as the synergies made possible within its context?

The project Immigration and Language in Canada. Greeks and Greek-Canadians (ImmiGrec, see https://immigrec.com) sponsored by the Stavros Niarchos Foundation, was implemented with the cooperation οf McGill, Simon Fraser University, York University and the University of Patras. The project’s main aim was to document and investigate the history and language of Greek immigrants in Canada between 1945 and 1975, a period which has seen the bulk of Greek immigration. It covered a unique interdisciplinary field that links history and social history with linguistics and sociolinguistics. For this purpose, the research teams of, mainly, the three Canadian universities collected material from Greek-speaking communities across Canada, both oral (350 hours of narratives about the experiences of first-generation Greek immigrants) and printed (letters, newspaper clippings, photos, etc.), following the rules and regulations of scientific ethics and the protection of personal data. The data were registered in an electronic repository and then integrated into a specially designed electronic database, while a small part of the collected material supplied the exhibits of a digital museum (https://virtual.immigrec.com). All electronic tools were designed and developed at the University of Patras. The linguistic analysis of the available data led to the publication of a volume (see Ralli 2019) and a number of articles on the issue of the Greek language spoken in Canada by first-generation immigrants.[1]

This project has addressed two main topics that narrate the historical experience of Greeks in Canada, while placing particular emphasis on language. The first relates to the stance of Greek Canadian communities towards the official policies of the Canadian state regarding language. For instance, the bilingual characteristics of Canadian society in the province of Québec have created an exceptional situation for Greek immigrants that had to compete with two unknown languages, English and French.

The second derives from the particular characteristics of Greek Canadian communities, since more than 80% of the postwar immigrants were sponsored or nominated by relatives or co-villagers already settled in Canada (Chimbos 1999).[2] The vast majority of Greek immigrants in Canada came from rural and working-class backgrounds, as it is indicated in the predominance of unskilled labor in the early stages of their life and settlement in Canada. Their social background defined their distance from the official language of the Greek state at the time of their departure from Greece, that is, katharevousa, a “purified”, according to Ancient Greek standards, version of Modern Greek, which was often reproduced in diaspora by the prominent community members, official publications and the representatives of the Greek state. This linguistic division reflected social and political divisions that were repeated and reformulated within the ethnic experience. Moreover, the persistence of dialectal differentiations and the strong societal ties between co-villagers created an interesting case to the charting of the multiple worlds and linguistic attitudes of the Greek-Canadian experience.[3] 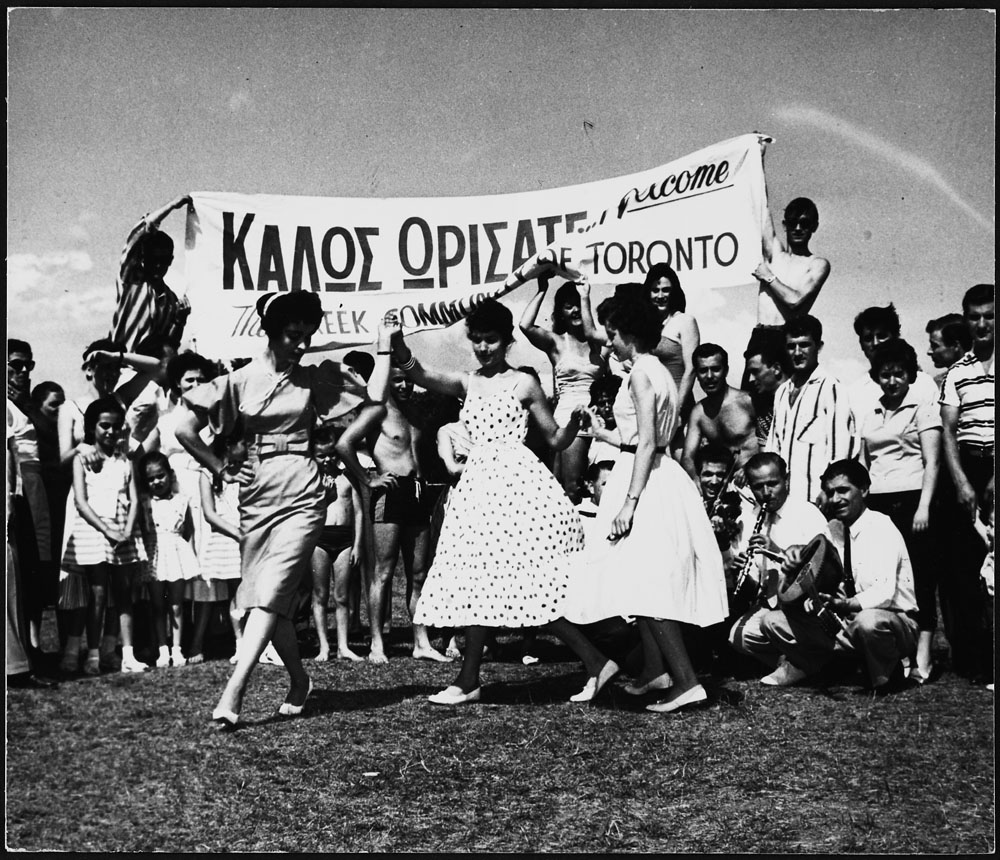 Three women performing a traditional dance at an event for the Greek Community of Toronto (Source: Canada. Dept. of Manpower and Immigration / Library and Archives Canada)

From a linguistic perspective, what are the different modalities and strategies of using English among Greek-Canadians in comparison to Greek-Americans?

Living in a bilingual environment, where English is the dominant language (in recent years, French became the dominant language but only in Québec), borrowing is natural, which is often lexical (transfer of words from the source language to the target language), but also structural when there is bilingualism and a situation of intense linguistic contact.[4] Crucially, for first-generation Greek-Canadian immigrants, no structural transfer has been observed, which, however, seems to be the case for second-generation immigrants, as their Greek belongs to the so-called “heritage” language. Research conducted within the ImmiGrec project, has shown that English-based loans are fully integrated in Greek-Canadian and that their accommodation is not only the product of socio-linguistic factors but follows specific linguistic constraints belonging to the target language, that is, Greek, of phonological, morphological and semantic nature. For instance, most English nouns receive gender and Greek inflectional endings (e.g. non-animate nouns become neuter and are inflected according to the most frequent Greek nouns in -i, as for instance, bíli < English bill). Moreover, the data has confirmed that there is a comparable accommodation of loan nouns for all varieties of Modern Greek, including the dialectal ones, all of them following the same paths for integrating their loans irrespectively of the source language, which may be English, Turkish or Romance.[5] Finally, comparison with the available Greek-American data has revealed that there are not many differences between the two varieties, Greek-Canadian and Greek-American, at least on the lexical level. However, a more profound research must be conducted on this issue, since oral corpora of Greek-American are not generally available and with some exceptions (e.g. Seaman 1972), written material is not easily found.[6]

Canada offers a particular case, the one of Québec. What has been the linguistic stance of Greek immigrants in this French-speaking environment?

Greeks immigrating to Québec (mainly to Montréal) prior to 1970 would not have given much thought to learning French. French was an obstacle to employment and the French-speaking Quebecers were treated as second-class citizens until state policy began to change language and immigration laws for the province, a process that was rooted in the mid-late 1960s but probably only had real consequences starting from the late-1970s, when Premier René Lévesque struck a deal with the Greek community that funded Greek day schools with the expectation that the students would be taught 60% French, 30% Greek, and 10% English. This deal was part of a provincial strategy to bring allophones (non-English and non-French) speakers closer to Québécois culture. In addition to this, numerous pieces of legislation have mandated language use in public space and immigrant communities.[7] The pervasiveness of language politics in Québécois society has created a different commitment to language retention in Québec than, for instance, in Ontario. As a result, first-generation Greek immigrants live now in a stable multilingual environment, where they speak Greek at home or with other Greeks, while English, or partly French in recent years, is used for communicative purposes with non-Greeks or under official circumstances.

Again, on a linguistic note, the project seems to have opened a rich field of study for the development of the Greek language in itself – dialects, accents, generational gaps. What can we learn on Modern Greek by studying diasporic Greek speakers?

The exploration of Greek-Canadian may be particularly informative on the study of Modern Greek, its history, evolution and its varieties. The recorded interviews clearly show that, in the last decades, the influence of Standard Modern Greek is not negligible in the speech of Greek Canadians due to frequent visits to Greece and the increased exposure to mainstream Greek content through technology (satellite TV and Internet). However, a great tendency for them is to employ features that belong either to their native dialectal variety of Modern Greek, or to a vernacular form of Common Modern Greek, which was spoken in the first half of the 20th century, before the standardization of Modern Greek. Common Modern Greek had received very little influence from Katharevousa (the archaizing official variety of Greece until 1975) and was differentiated from region to region, where the spoken dialectal varieties were increasingly becoming assimilated to it.[8] All Greek Canadians who were born after 1920, and had not lived in a purely mono-dialectal context before leaving Greece, brought this vernacular Common Modern Greek with them to Canada, and continued to use it after their settlement in the new country. Crucially, the exploration of the immigrant speech has provided evidence that despite the pressures of Standard Modern Greek and Common Modern Greek, some dialectal varieties still persist, as for instance, Cretan, Pontic and Lesbian, and some dialectal patterns are also spread among speakers from areas that follow the standard form. For instance, immigrants from Athens occasionally use an unaccented syllabic augment of the e- form (e.g. emílisa) parallel to the standard form where the augment is absent (e.g. mílisa). According to Ralli et al. (2019), the extension of dialectal patterns to other dialectal groups living in Canada may be due to the fact that these patterns can be found in the most prestigious Modern Greek dialects, as for instance, in Peloponnesian and Heptanesian, which are generally considered to be the base for Standard Modern Greek. As a result, a Greek-Canadian Koine has possibly begun to develop, influenced by but essentially independent from both Standard Modern Greek and Common Modern Greek.

An innovative feature of the IMMIGREC project was the creation of a virtual museum of the same name. How was the Greek community of Canada involved and what has been its reception so far?

The digital museum of ImmiGrec (https://virtual.immigrec.com) has been received with much enthusiasm by the Greek-Canadian community, although there are no available figures about the exact number of visitors. It deals with the first-generation Greek immigrants who went to Canada from 1945 to1975 and exhibits various aspects of their lives (e.g. reasons for immigrating, departure, installation, language, work, family, community life, schooling, etc.). It consists of nine rooms, corresponding to nine thematic units and an atrium containing socio-historical information about Greece and Canada from 1940 to 1970 and the process of immigration in general. To give you a specific example, Room 7 is dedicated to the language and the visitor can find information about how English has influenced Greek, the attitude of the immigrants towards language, the role of Greek in the Greek-Canadian families, while emphasis is given on the use of various dialectal features which have been preserved in the speech of immigrants. For the development of the museum, state-of-the-art technologies have been used to create a user-friendly digital environment, in which the user navigates easily and gains access to a variety of exhibits with image, sound and video. The material has been gathered from interviews of informants living in various Canadian cities, from multimedia files, written sources and photographic archives. The museum has already been presented at various international conferences, such as the 2nd EUROMED Pan-Hellenic Conference on the Digitization of Cultural Heritage (Volos: December 2017), and at the Annual Conference of the Associazione per l'Informatica Umanistica e la Cultura Digitale (Bari: January 2018).

[1] Ralli, A. (ed.), Language and immigration: the language of Greek immigrants in Canada, 161-172. Patras: Laboratory of Modern Greek Dialects.

[3] For more details, see, among others, Ralli, A., P. Pappas & S. Tsolakidis 2019. Distribution of the unaccented augment in Canadian Greek. In Ralli, A. (ed.), Language and immigration: the language of Greek immigrants in Canada, 161-172. Patras: Laboratory of Modern Greek Dialects.