Greek writers and poets on Easter 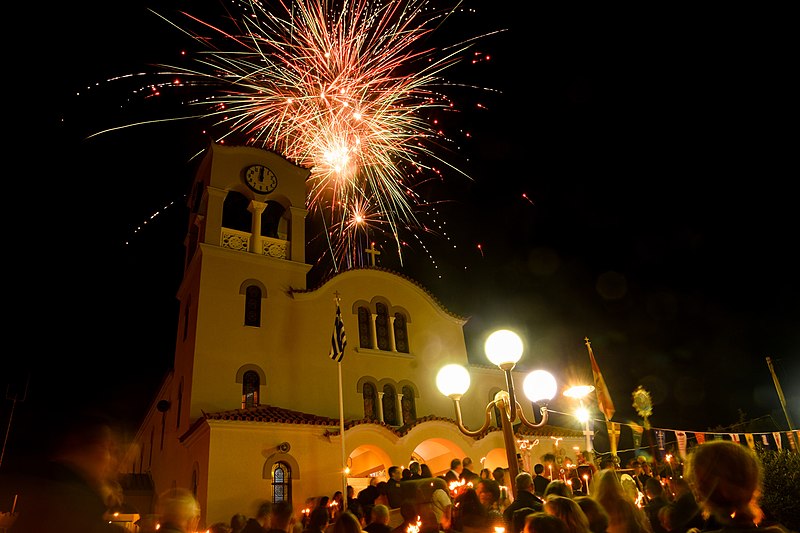 All around Greece, the people have always looked forward to Easter with reverence and profound emotion. For the Greeks, Easter marks not only the Resurrection of Jesus Christ, but also the resurrection of the Nation, as well as the rebirth of nature.

In Greece we refer to Easter Sunday as "Bright" Sunday, a term that has its origins in medieval tradition. The crucifixion, the epitaph and the resurrection have been the source of inspiration for many Greek writers and poets, both anonymous and renowned. Below are some characteristic examples of such texts.

One of the most famous such works is Easter short stories by Alexandros Papadiamantis, in which the author conveys his deep religiosity through acts of love and universal messages.

On the themes running through his works, Papadiamantis notes: "For my part, as long as I live and breathe and am of sound mind, I will never cease, especially during these resplendent days, to praise and adore Christ, to depict nature lovingly, and to represent with affection those customs which are authentically Greek."

Andreas Karkavitsas, one of the most important representatives of naturalism in Greek literature, describes in his works common values of ordinary individuals. In his short story "The justice of the sea" from the anthology Words of the prow Karkavitsas describes a stormy night at sea and the hallucinations of a young sailor that he is transferred to the port of Hydra on Easter Day: "Suddenly I was plagued by hallucinations of sea beasts, sharks and whales, swordfish and dolphins circling greedily my corps and engaging in diabolical fight with the vultures of the sky for the gobbets of my carcass. I was looking on in roaring laughter seeing the way they yearned for my carrion meat. And then I saw my head rolling slowly, black and resembling a rum cask, into the port of Hydra. It was Easter Day and the country shone snow white, as though built of marble; the church was filled with the sweet fragrance of incense. Trombones sounded and played merry tunes and glasses were filled with ruby colored wine. Eggs dyed blood red flashed in the hands of the people and the joyous hymn of Christ is Risen was quaveringly intoned in coral lips" (Karkavitsas freely adapted by Vassilis C. Militsis). 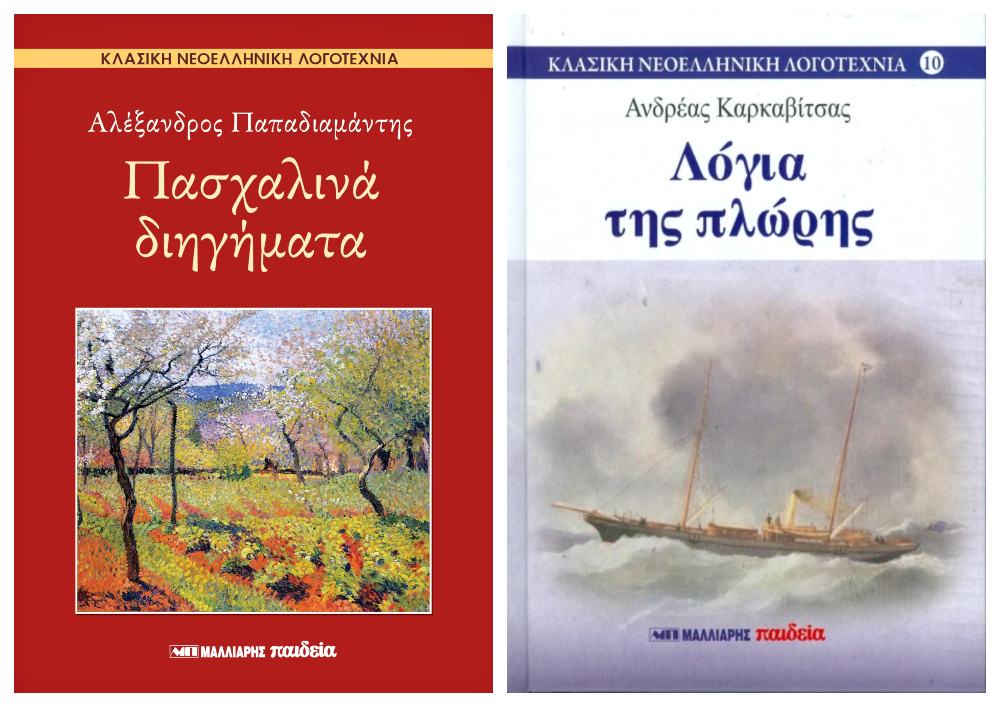 Eleni Choreanthi in her short story "Easter on the island of jasmines" describes inimitably the epitaph service that takes place in a secluded monastery on the island of Chios "far from the capital, the lights and the fireworks, the professional chanters and the imposing churches". In this environment, the depiction of the Crucifixion and the burial of Jesus were "like a theatrical performance of ancient tragedy."

The author leads us to the same place on Holy Saturday, where the other-worldly monk chants the Resurrection Hymn with a quivering voice and the place was filled with the fragrance of frankincense, thyme and pine".

Lastly, in her short story, Choreanthi does not fail to refer to the "unredeemed lands" of Asia Minor, the Hellenism of Ionia that flourished for many centuries and experienced "the Passion of Jesus, the Asia Minor Catastrophe, the uprooting and dispossession that turned them into refugees, without having the opportunity to celebrate their own Resurrection".

Costas Kairofylas, a writer and journalist, in his short story "Tragic Easter" gives a historical point of view, describing the events of Easter 1827, six years since the onset of the Greek Revolution: "The Easter of 1827 was not happy… Many misfortunes, many mistakes and especially the cursed disunity which had disrupted the impulse of the young fighters, did not bode well for the future…After six years of struggles and sacrifice, they realized that the liberation of Greece had not yet been achieved…"

There are also many Greek poets who have paid tribute to Easter in Greece:

The Greek National poet Dionysios Solomos in his poem "The day of Easter" gives a message of hope love and forgiveness:

The last cool star of dawn was
foretelling the brightest sunshine;
no cloud, no drift of mist was travelling
across any part of the sky.
Corning from there, the breeze
blew so sweetly across the face,
so gently, that it seemed
to whisper to the depths of the heart:
‘Life is sweet and death is darkness.’

‘Christ is Risen’ Young and old, maidens,
everyone, little and great, prepare!
Inside the laurel-covered churches,
gather in the light of joy!
Open your arms and with them offer peace,
that the icons of the saints may see.
Embrace and kiss each other sweetly, lip on lip
let friend and foe proclaim, ‘Christ is Risen!’

One the most mesmerizing moments in the rituals of Holy Week is the "Hymn of Kassiani" (Tropario tis Kassianis) chanted once a year on the evening of Holy Tuesday. It speaks of the woman who anoints Christ’s feet and seeks His forgiveness for her sins. Kostis Palamas, one of the greatest Greek poets with a significant contribution to the development of Modern Greek poetry, was inspired by the message it conveys, that forgiveness is the only path to inner peace.

Aggelos Sikelianos was another leading 20th-century Greek lyrical poet. His first important work was "The Light-Shadowed", published in 1909, and he went on to write outstanding works. His next period was introduced by the philosophical poem "Prologue to Life" (1917) that included the long works "Mother of God" (Meter Theou) and "The Easter of Greeks" (Pascha ton Hellenon). 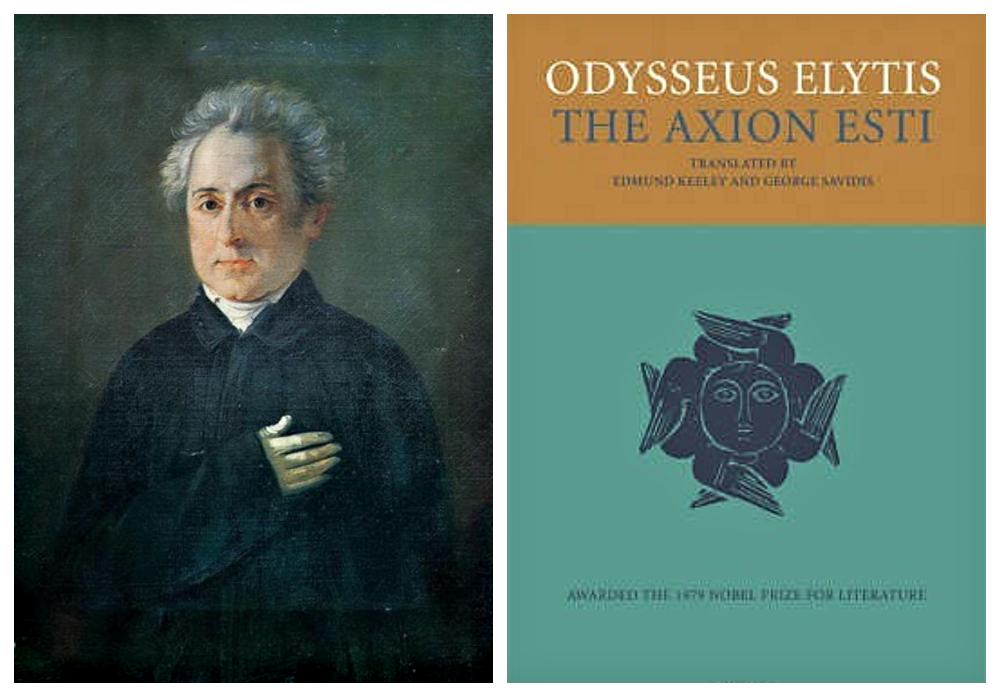 Finally, Nobel Prize winning poet Odysseas Elytis in his "Diary from an April as yet unseen" refers to the Holy Week. Easter is the crisis and the climax of the Diary, just as crucifixion is in the Axion Esti. It is a period of literal death, and very real mourning, but also a time of unrelenting hopefulness, the fervent commitment to the principle that this world is not all, that some of life's most significant gestures and meanings are as yet unseen. It is worth noting that Elytis, addressing the Nobel Committee in 1979, noted that for him poetry was "the art of leading you toward what goes beyond you".

As Louis A. Ruprecht noted "The 'Diary' is as complicated and disorienting in its way as a freshly excavated archaeological site...What was once a classical column drum will later serve a very different liturgical function, on a church altar, perhaps; its final resting place, however, may be in the retaining wall of some Venetian or Turkish fortification. Such is the ambient archaeology of Greek time. Time passes, cultures transform themselves and their inhabitants; only mute stones seem to speak permanently".

It is not exaggeration to say that if readers understand the poetry of Odysseas Elytis then they understand not only Greek traditions but also the Greek spirit that is still alive through centuries.

This year, 2020, Greek Easter will be quite different for Greeks as well as most countries around the world; in these times, literature remains a way to reconnect with the traditional spirit of this holiday, hoping a for a more "bright" in the future.