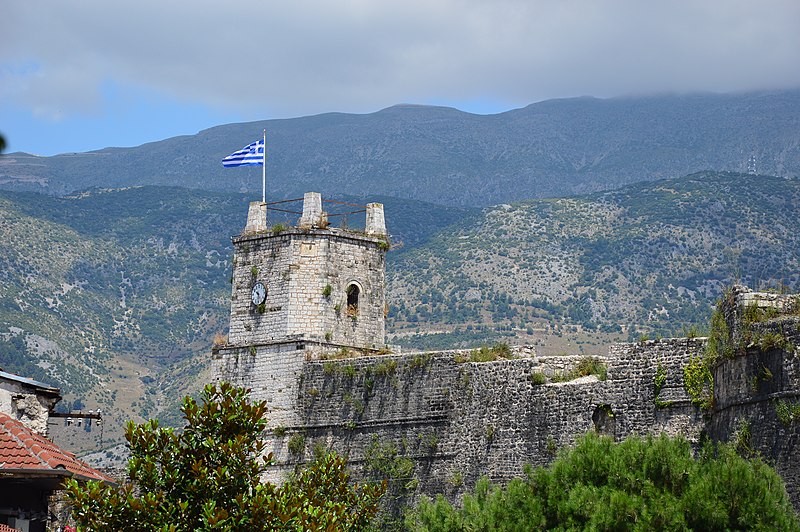 The Castle of Ioannina is a fortified part of the city, on top a rocky promontory jutting into Lake Pamvotis. Its current form dates to a reconstruction in the late Ottoman period, retaining many elements of the earlier Byzantine fortress, based in its turn on fortifications dating to the Hellenistic period. It had significant influence over the history of the town which grew around it. In the castle there are two inner keeps, one in the northeastern corner and another in the southeastern corner. The surface of the castle outside the two keeps is occupied by houses of the old city.

According to archeologist Barbara N. Papadopoulou, the northeastern keep was the original core of the Byzantine castle. There are some traces of the Byzantine wall there, but the space is dominated by the mosque of Aslan Pasha. The southeastern keep is the fortress built by the Normans. Here we find the 13m-high "Tower of Bohemond", the remains of Ali Pasha’s palace, the Fethiye mosque and the tomb of Ali Pasha.

The southeastern citadel, known as "Its Kale" (a Greek rendition of the Turkish iç Kale "inner fortress"), extends on two levels. It is believed that, during the Byzantine era, the residences of Ioannina’s nobility were housed in this part of the castle. The metropolitan church of Taxiarches and the church of the Pantokrator were built in the same area. The tower of Bohemond became part of the Saray of Ali Pasha, after some additions. The citadel was also the centre of activity in the times of Ali Pasha, since the complex of the Saray and other military buildings were built there, creating the headquarters for him and his officers. Today the southeastern citadel is an archeological site that extends on two levels. Several interesting buildings are preserved and have been restored by the 8th Ephorate of Byzantine Antiquities. 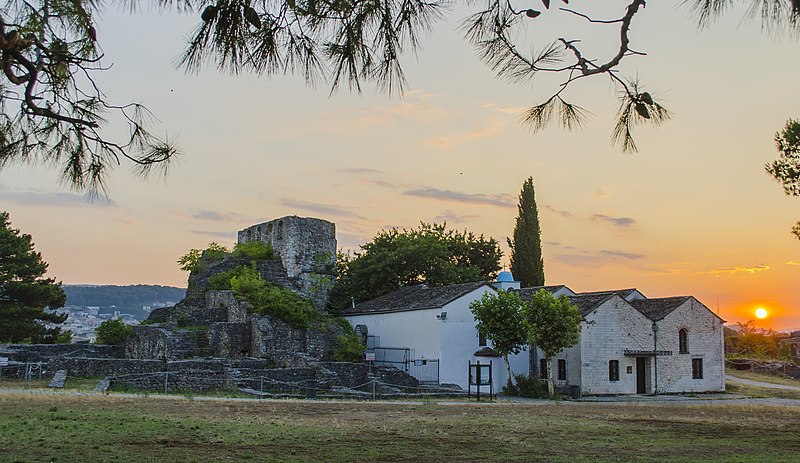 The tower of Bohemond, Silversmithing museum and church of Taxiarches (by Bountourin via Wikimedia Commons)

The northeastern citadel, also known as Aslan Pasha Acropolis, is defined by a fortification, part of which dates back to the Byzantine era. On the southern side, visitors can see the well preserved Byzantine gate, which is protected by a circular tower. It is believed that, in the Byzantine period, the acropolis was called Epano Goulas "upper/northern tower", where the palaces of the rulers of Ioannina, as well as the church of Agios Ioannis were situated.

Main buildings in the citadels

The choice of the location of the castle, according to excavations, was not arbitrary. Attackers could only access one of the fortress’ four sides, where the central gate is, and where a water trench had already been constructed since the byzantine age. This water trench turned the castle into an islet, as the other three sides were already surrounded by the lake. In the external part the gate has a large double arch constructed with carved stones. To the right and left of the arch there are two stone carvings with animal figures. In the centre of the front of the arch there is an inscription in Arabic referencing the Islamic year 1259 (1843 A.D.) and the name of Osman Nouri Pasha, who probably oversaw its restoration.

One of the most famous towers of the castle is the "tower of Thomas", located a short distance from the main gate. In its facade there is a large arched opening. Its construction is attributed to Thomas Preljubović, Serbian Despot (ruler) of Epirus in the 1366-1384. Preljubović tried to restore and fortify the castle against possible attacks by Albanians who had already conquered a great part of the Epirus region.

The construction of the Saray (palace) of Ali Pasha started in 1788, on the western hill of the inner citadel of Its Kale. The palace is described by European travelers as a large and complex two-storey structure with many windows giving excellent view to Lake Pamvotis. It housed the apartments of Ali, his family, his servants and his harem. There was also a lounge and an auditorium. The Saray remained an administrative centre after the fall of Ali Pasha (in 1822) until 1870, when it was completely destroyed. According to sources it had already suffered great damage during the siege of the Sultan's troops against Ali Pasha.

In the ruins of the main building of the Saray was later constructed the Military Hospital "Agioi Anargyroi". In 1978, the 8th Division of Ioannina donated the building to the Ministry of Culture, where the Byzantine Museum of Ioannina was inaugurated in 1995. The offices of the 8th Ephorate of Byzantine Antiquities is housed in one of the building’s floors. 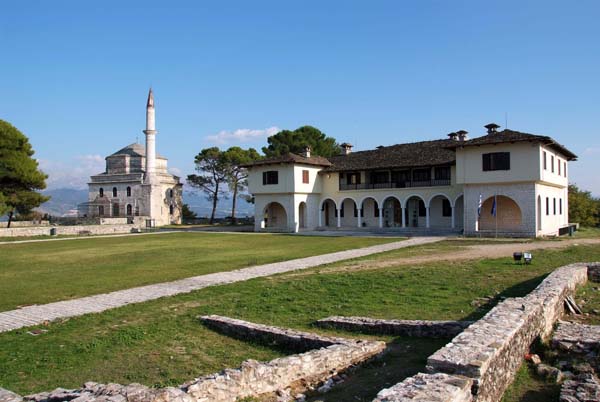 The Byzantine Museum of Ioannina, with the Fethiye Mosque in the background (by TasosPapan via Wikimedia Commons)

The mosque dominates the easternmost, highest point of Its Kale. It was built in about 1795 by Ali Pasha as the mosque for the Saray. The prayer niche (mihrab) and dome of the building carried noteworthy painted and relief decoration. Northwest of the mosque is the monument housing the tombs of Ali Pasha and one of his wives, covered by an impressive ironwork railing, an imitation of the original wrought-iron railing, which was preserved until about 1940. A small building north of the Fethiye Mosque has been identified as a gunpowder store. Today it is used as a museum by the Ephorate of Antiquities of Ioannina.

In a central part of Its Kale there is a building known as the "Treasury", a name preserved by oral tradition. It dates to the late-Ottoman period, and probably formed part of a larger building of the palace. One part of it was turned into the church of Ayioi Anargyri in the 20th century, while the rest of the building hosts a silver-work collection of the Byzantine Museum.

The mosque is located in northeastern citadel. It was built at the beginning of the 17th century (probably in 1618) by Aslan Pasha, replacing the Byzantine Church of Saint John. It was the core of a large religious-educational complex, comprising Aslan Pasha’s tomb, a madrassa, kitchens and a Turkish Library. Today it houses the Municipal Ethnographic Museum of Ioannina.

An important building of the Late Ottoman Empire, the Soufari Sarai was a cavalry school built by Ali Pasha for his troops. It is a stone building with an arched ground floor. Today, after its restoration by the Ministry of Education, it houses the General Historical Archives of Ioannina. 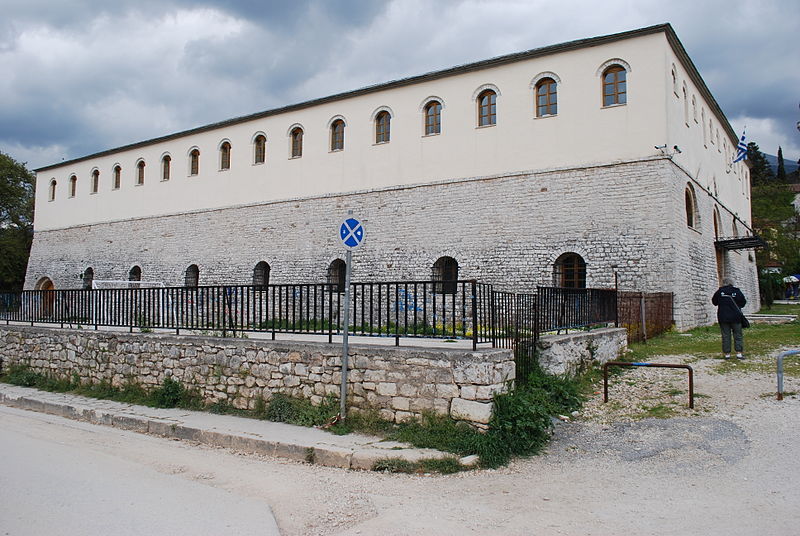 The Byzantine bath complex is located near Soufari Serai. It was unearthed in the 1980’s and is one of the few important Byzantine buildings still preserved in the castle. A large part of it is under the foundations of a modern-day school (constructed prior to its discovery). The13th century Byzantine bath consists of a tank, which occupies its western part. It is itself built on the ruins of an ancient building, of which part of the hypocaust is preserved.

Ioannina housed a vibrant Jewish community already since the early Byzantine period. The Jewish population (consisting primarily of Romaniotes) saw a steep increase after many Spanish Jews fled to Ioannina following their persecution and expulsion by the Catholic Monarchs of Spain since 1492. In 1314, the Byzantine Emperor Andronikos II Palaiologos had issued a Golden Bull (decree with a golden seal) granting Jewish citizens equal rights to the rest of the city’s population, making Ioannina an ideal refuge for the persecuted. The Jewish community remained a vibrant and central part of the city’s social and economic life, until the massive Nazi persecution of WWII.

The Synagogue was constructed in 1829. Its architecture is typical of the Ottoman era, a large building made of stone. The interior of the synagogue is laid out in the Romaniote way: the Bimah is on a raised dais on the western wall, the Aron haKodesh is on the eastern wall and at the middle there is a wide interior aisle. The names of the Ioanniote Jews who were killed in the Holocaust are engraved in stone on the walls of the synagogue.

M.V. (Intro image: The castle of Ioannina by Annatsach via Wikimedia Commons)