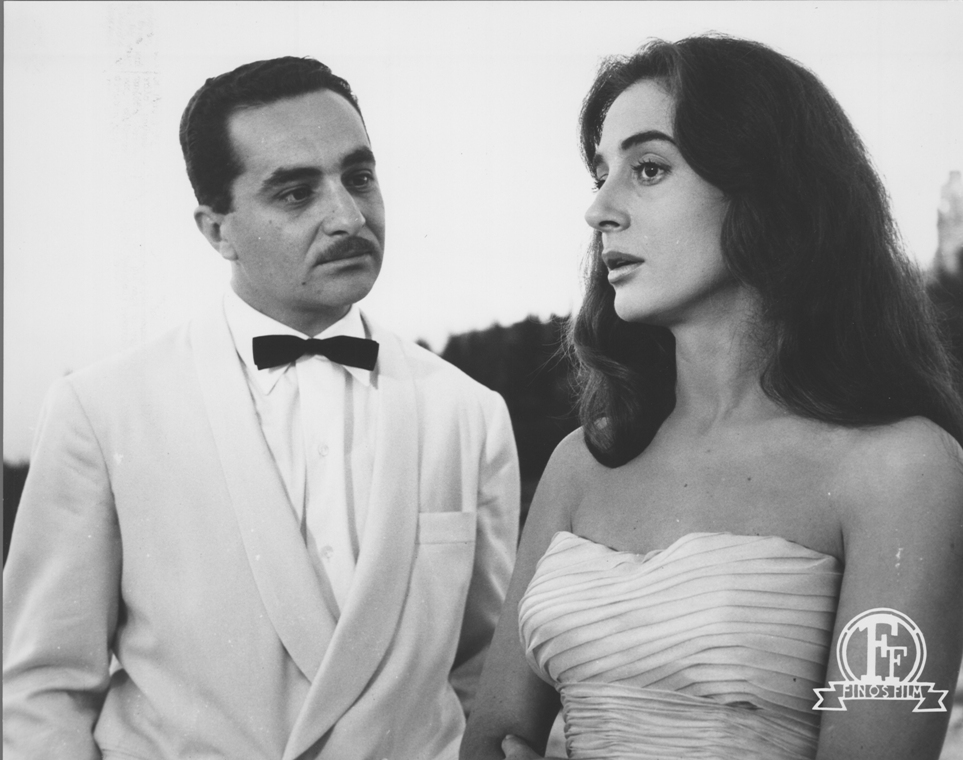 Minas Christidis and Ellie Lambeti in “A Matter of Dignity” (1958), dir. Michael Cacoyannis

In “A Matter of Dignity” (1958) directed by Michael Cacoyannis, a young woman named Chloe (Ellie Lambeti), child of a degraded Athenian family, is forced by her mother (Zorz Sarri) to marry a rich man (Minas Christidis) to save the family from financial ruin, regardless of the young woman’s personal feelings. When her mother’s callousness leads the family’s servant (Eleni Zafeiriou) to her death, Chloe takes the servant’s sick son (Vasilakis Kailas) with her and seeks refuge in Tinos Island on August 15th, where she prays for a miracle. 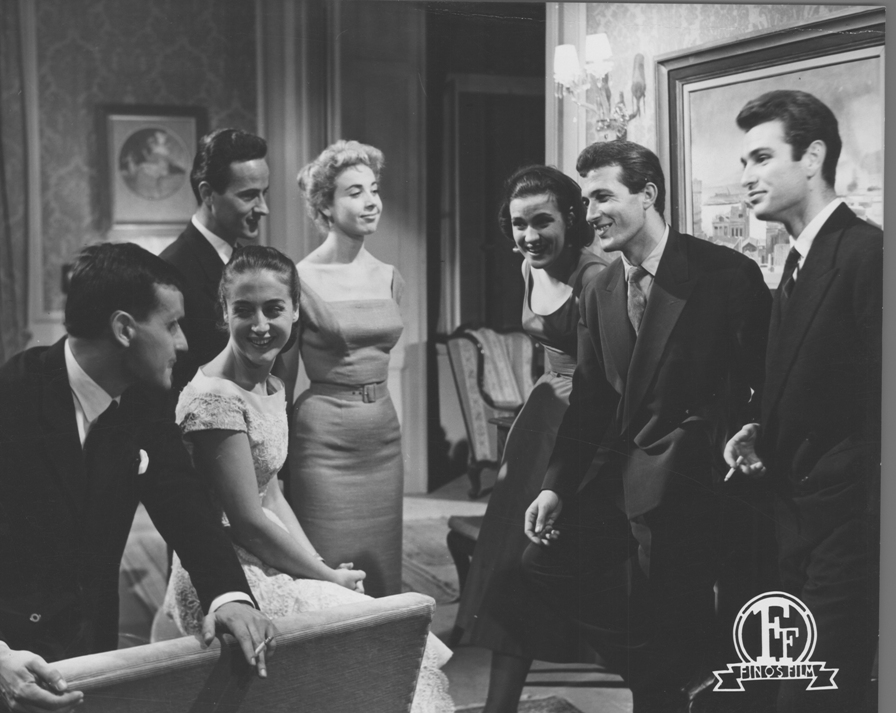 Born in Limassol, Cyprus in 1922, Michael Cacoyannis brought international attention to Greek cinema when he adapted and directed Alexis Zorbas (1964; Zorba the Greek), which was nominated for seven Academy Awards (and won three), four BAFTA Awards, a Grammy (for the score), and five Golden Globes. After receiving a law degree (1943), Cacoyannis became an actor (1947) and scriptwriter (1951) before directing the critically acclaimed Kyriakatiko xypnima (1954; Windfall in Athens). His other films include Stella (1955), which introduced actress Melina Mercouri, To koritsi me ta mavra (1956; Girl in Black), To teleftaio psema (1958; A Matter of Dignity), Ilektra (1961; Electra), the English-language The Trojan Women (1971), and a documentary about the Cypriot civil war, Attila ’74: The Rape of Cyprus (1975). Cacoyannis also directed operas and stage plays, including a musical version of Zorba (1983–84). 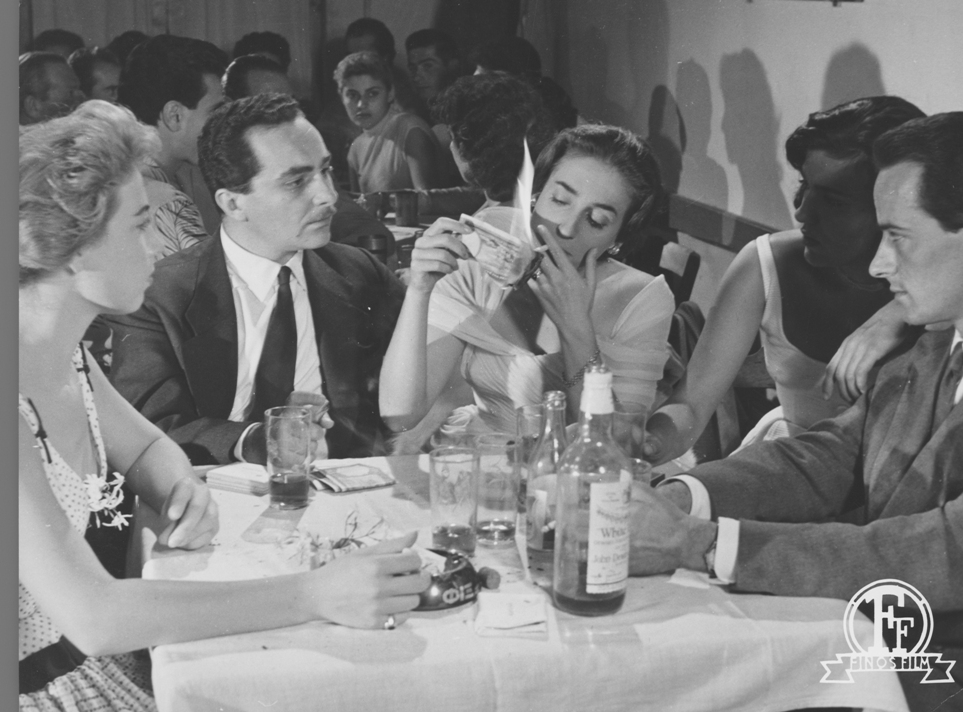 “Cacoyannis’ last film of the 1950s, “A Matter of Dignity / To Teleftaio Psema” (1958), brought his camera back to the changing urban environment as it explored the collapsing traditional Athenian aristocracy in its humiliating compromise with the ascending nouveaux riches and the gradual domination of the petit bourgeoisie. The film depicted the inability of the traditional elite to maintain its status and authority within the rapid capitalist commodification of values, practices, and relations. The bourgeois collapse was illustrated in diverse spaces, almost in the manner of Gustave Flaubert and Guy de Maupassant, as the aristocracy transformed itself into a spectacle, an object of nostalgic elegance and grace, in order to be sold at the highest possible price. The central actor, Elli Lambeti, played her role of the living commodity – as the daughter who was to be married to a wealthy upstart – with sublime detachment: yet what looks so ‘beautiful’ is, in reality, her personal tragedy. Manos Hatzidakis’ music, with its disparate sonic references to jazz, foxtrot, popular Greek tunes, and classical music, underscored the confusion and internal anxiety of the characters as they struggled to maintain their obsolete social distinctions and hollow personal dignity. 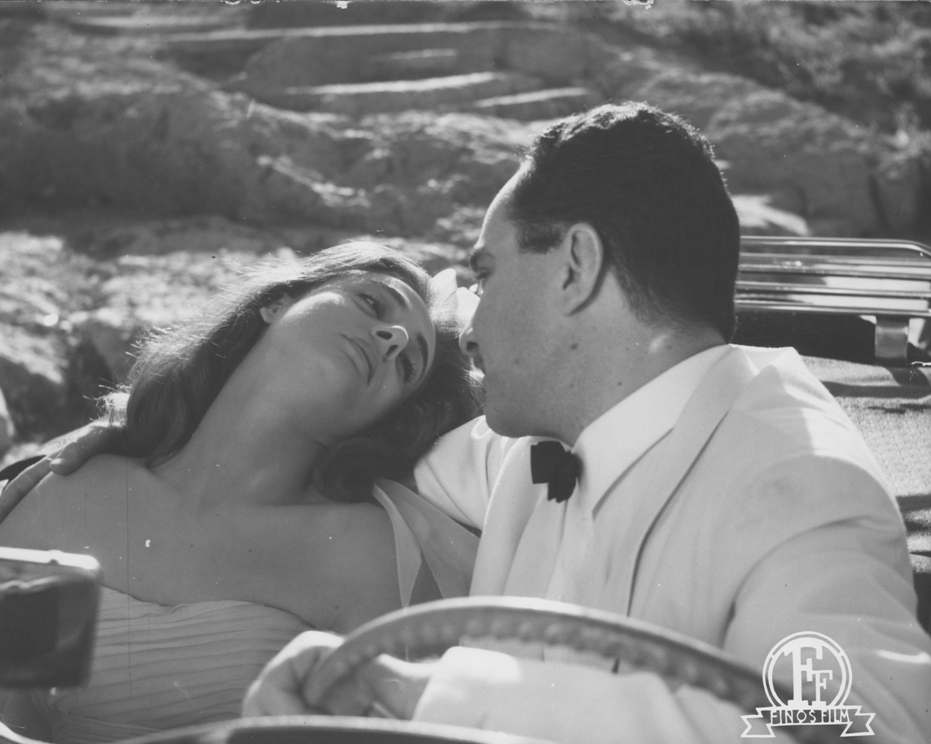 Ellie Lambeti and Minas Christidis in “A Matter of Dignity” (1958), dir. Michael Cacoyannis

Walter Lassally’s photography ‘dived’ into the depths of each frame while circling with affection and tenderness the bodies of the actors in their most intimate moments of humiliation and emotional defeat – and the reality of defeat and trauma is what comes through most of his films thereafter. It was a drama about the deep changes that the traditional bourgeoisie was going through as Greek society was entering its rapid industrialisation, and was the first to depict the rise of the new ruling class of the petit bourgeoisie. Cacoyannis later said he felt that some scenes in the film were amongst ‘the most successful things’ 9 he ever did”. (Vrassidas Karalis, “Realism in Greek Cinema”, I.B. Tauris, 2017, p. 63-4). 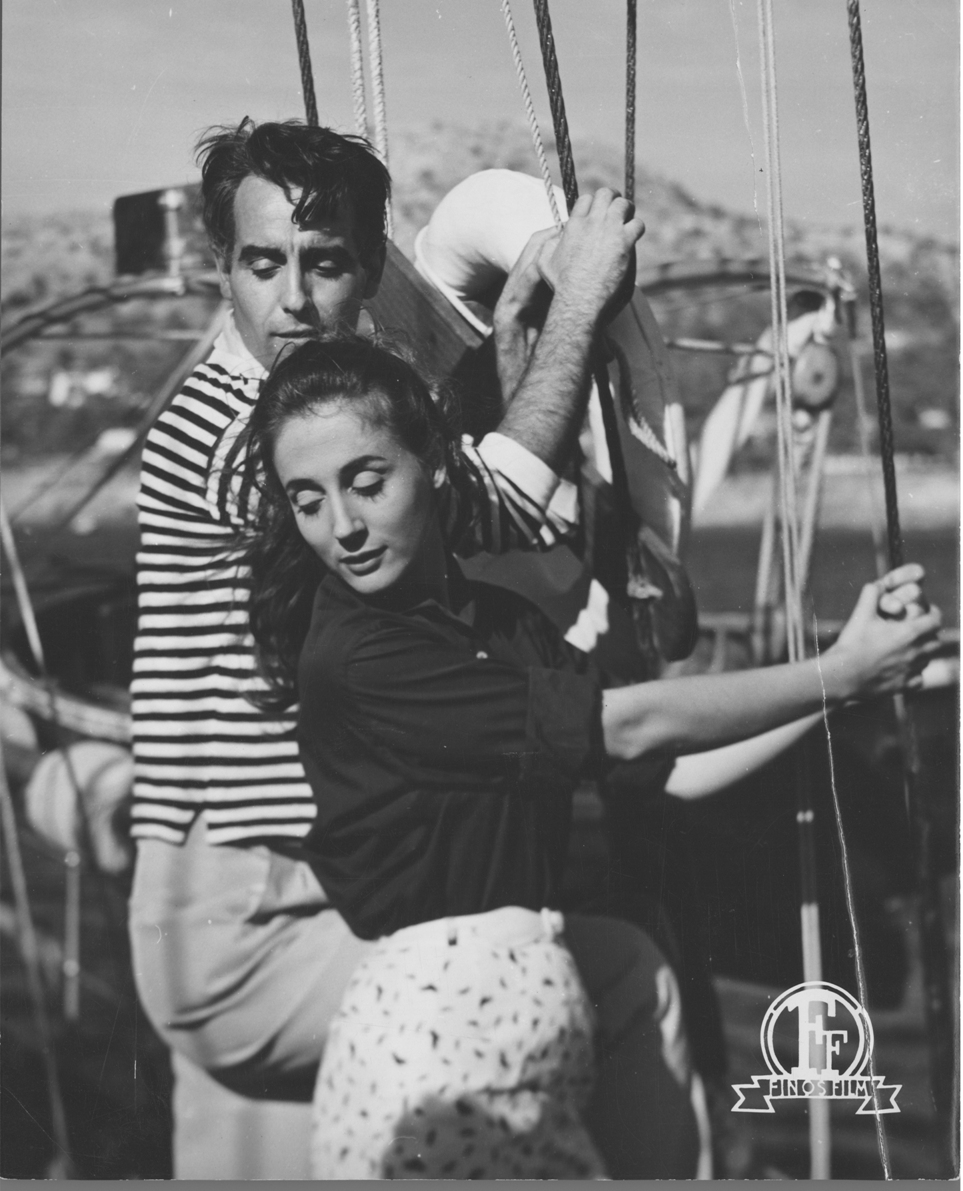 Michael Nikolinakos and Ellie Lambeti in “A Matter of Dignity” (1958), dir. Michael Cacoyannis

It looks like the four first films by Michalis Cacoyannis, “Windfall in Athens”, “Stella”, “A Girl in Black”, and “A Matter of Dignity”, form a cinematic space inhabited with fatherless female characters in their quest for freedom from societal oppression and lack of material resources. The role of the mother with the daughter moves the plot in the films of Cacoyannis’ early period, as Vrassidas Karalis (ibid, p.92) comments for Cacoyannis’ female protagonists: “(they) all represent the same child, in search of an absent father figure. As their lives are dominated by relentless mothers, the absent figure becomes the desire that motivates them to act, but they always end up lost, confused and homeless, as the only way to the father comes through the maternal body, which desires another man. 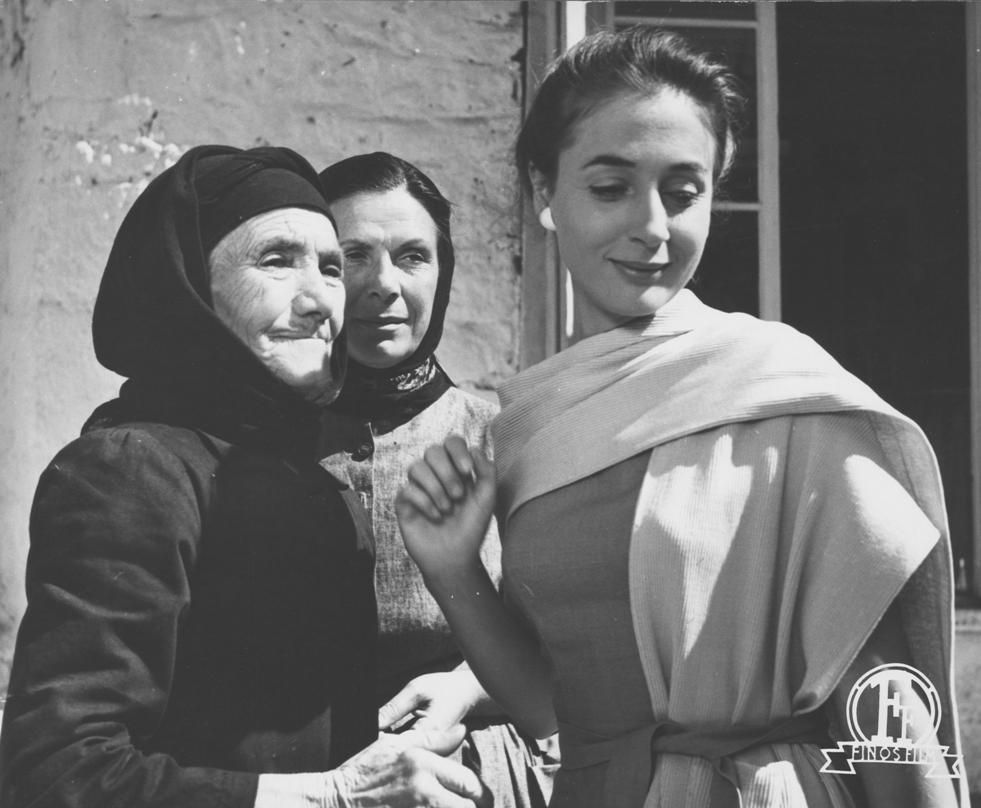 Eleni Zafiriou (in the middle) and Ellie Lambeti in “A Matter of Dignity” (1958), dir. Michael Cacoyannis

The great mothers – inconsiderate, indifferent, remorseless – look at their own children with apathy, if not contempt. The child feels guilty because she must have done something that she is not aware of: the guilt of being your own self becomes one of the most significant psychological under-scripts in his films. In the end, the child decides to identify with the aggressor: she joins the ranks of the dominant group because that is the only way to experience acceptance and recognition. Yet there remains the suffering of gender dysphoria and confusion. Symbolically, the child castrates itself and experiences its presence in terms of masochistic suffering and corporeal loss: it develops another unseen and unverbalised identity, as the dysphoria cannot be surpassed and the anxiety undermines self-understanding”.

Read also: “Windfall in Athens”, The Debut of a Patriarch, “The Girl in Black” by Michael Cacoyannis