The Greek language around the world! staellinika.com 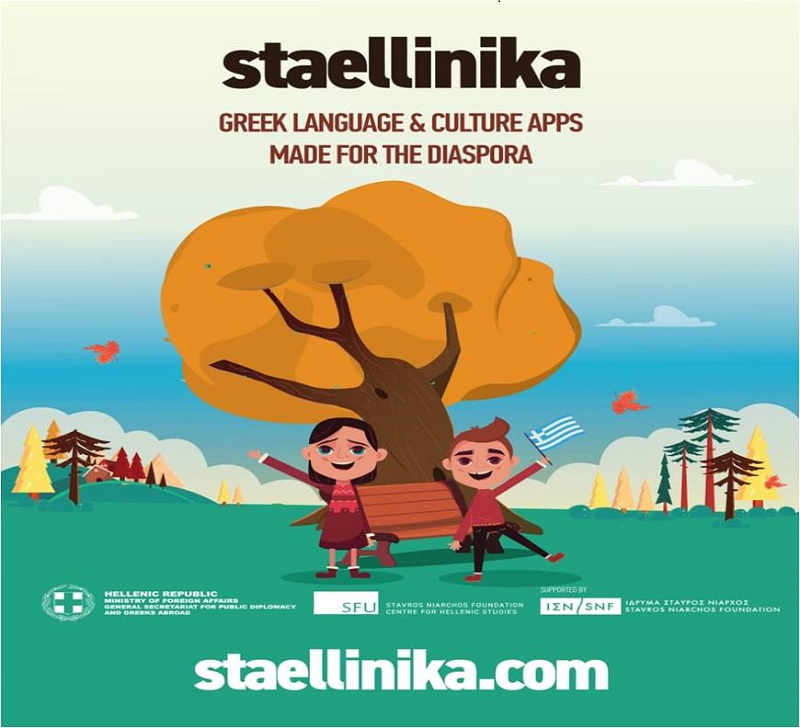 The Secretariat General for Public Diplomacy and Greeks Abroad of the Hellenic Ministry of Foreign Affairs and the “STAVROS NIARCHOS” Foundation Centre for Hellenic Studies at Simon Fraser University (SFU), Vancouver, Canada, are pleased to announce the official release of www.staellinika.com, a unique digital platform for learning the Greek language and culture. During the previous months, the platform, in its pilot format, gained 13,000 subscribers from 110 different countries.

As of today, the users of the www.staellinika.com platform, that is thousands of Greek youngsters across the world, as well as children of different nationalities who learn Greek, will be able to use the full version of the application with its additional content and courses to the already existing learning tools for the Greek language and culture.

The Deputy Minister of Foreign Affairs, Mr. Costas Vlasis, made the following statement: "The Greek language is one of the basic elements that unite the ecumenical Hellenism and through the platform www.staellinika.com we can make a significant contribution to its preservation, dissemination and promotion. The creative collaboration of the Secretariat General of Public Diplomacy & Greeks Abroad of the Ministry of Foreign Affairs with the New Media Lab of the Simon Fraser University, Stavros Niarchos Foundation - Center for Hellenic Studies, Vancouver, Canada, and, of course, the generous sponsoring of the “Stavros Niarchos” Foundation led us to the function of the full version of the application which has been loved and embraced by Greeks everywhere, with 13,000 registered users from 110 countries since its pilot operation.

Due to the special conditions caused by the pandemic, the fact that children and young people of the Greek Diaspora have the opportunity to travel for free from their home computer, mobile phone or their tablet to the wonderful world of the Greek language, Greek mythology and culture is even more valuable".

Announcing the full version of the platform www.staellinika.com, the Secretary General for Public Diplomacy and Greeks Abroad of the Ministry of Foreign Affairs, Mr. Ioannis Chrysoulakis, referred to the huge impact the platform has already reached and stressed that "the full version that is launched today signifies the completion of a very important and innovative effort realized thanks to the synergy of the Greek scientific community of the Stavros Niarchos Foundation - Center for Hellenic Studies at Simon Fraser University with the Secretariat General of Public Diplomacy and Greeks Abroad. This is the tangible result of the Greek scientific initiative and the unquenchable thirst for learning the Greek language and the consolidation of the Greek culture. We are confident that it will continue to be enriched with new modules and applications and that it will be a reference point for other similar initiatives that will be addressed to Greeks and philhellenes around the world”.

The Director of the SNF Centre for Hellenic Studies at Simon Fraser University, Dr. Dimitris Krallis, noted that, “the team at the SNF New Media Lab at SFU and our partners around Greece and across the world, feel grateful for the opportunity afforded us by the generosity of the SNF, to embark upon a rewarding creative journey. With the Foundation’s assistance we were able to bring together Canadian and Greek expertise in ways that bridged continents and constituted a team, whose creativity and innovation makes Staellinika a tool ideally suited for learning in this early part of the 21st century. We are proud to be able to serve Greek communities around the world, both in conditions of social distancing, but also in what should be a brighter and more optimistic era to follow. We see Staellinika as an illustration of the creativity and generosity of a global Hellenism that works across borders in the service of both Hellenes and our friends the world over.”

The Deputy Minister of Education and Religious Affairs, Ms. Sofia Zacharaki stated: “The "StaEllinika" platform is an important initiative that supports the promotion and dissemination of the Greek language and our culture more widely in the schools of the Greek Diaspora included. It is an important milestone for the plans that will be developed in order to spread our cultural heritage. We thank the Secretariat General for Public Diplomacy and Greeks Abroad of the Ministry of Foreign Affairs for this initiative."

The platform www.staellinika.com is used as a core tool for teaching and learning the Modern Greek language, mythology and elements of Greek culture throughout the Greek Diaspora. In May 2020, the platform was made available as a pilot in select schools of the Greek Orthodox Archdiocese of America, in collaboration with the Hellenic Ministry of Education and Religious Affairs, and the SNF Centre for Hellenic Studies at SFU.

Lauren Gilbert: This email address is being protected from spambots. You need JavaScript enabled to view it. / (+1) 778-782-8466
Administrational co-ordinator

The internet platform and series of applications www.staellinika.com is seeking to provide individuals ranging from preschool-aged children to young adults with an innovative and engaging product designed to re-connect Greeks around the world with their heritage language and culture. Today’s full release sees this goal realized with the launch of a full course curriculum for beginner heritage learners in schools and for individuals at home. The platform can be used either as a stand-alone program to assist schools or to supplement existing curriculums.

The platform www.staellinika.com responds fully to the challenges caused by the pandemic on the traditional learning system of the young people across the world and is, at this stage, continuing to facilitate remote learning by privileging accessibility and innovative pedagogy. The platform can be accessed on mobile devices and relies on principles of microlearning and gamification for the facilitation of the Greek language web-teaching at schools, other educational foundations or at home. Users are exposed to video game features such as scores, points, skills and rewards to promote the desire for continued learning.

An excellent interdisciplinary team of developers, animators, and educators coordinated by the Secretariat General for Public Diplomacy and Greeks Abroad and the SNF Centre for Hellenic Studies has been working to develop the online platform and suite of apps now available to the Diaspora. This team continues to work and will play a key role in the continuous updating of www.staellinika.com.