The Museum of the Victims of Nazism is located at the entrance of Distomo, a town in western Boeotia close to Delphi and about 150km northwest of the Greek capital, Athens. The museum was founded in 2005, on the site of the old Primary School and it was inaugurated by the then President of the Hellenic Republic Carolos Papoulias, whose signature appears in the guest book.

At the entrance, visitors can see the photo of Maria Padiska , who has come to be known as the "woman of Distomo", and who passed away in March 2009 at the age of 84. Her image became a world symbol of grief since the publication of an article in LIFE magazine, "What the Germans did to Greece", on 27 November, 1944, pp 21-27. The photo caption read "Maria Padiska still weeps, four months after the Germans killed her mother in a massacre at the Greek town of Distomo".

The total area of the museum, which is roughly about 200 sq. meters, is divided into 2 levels. On the first floor, one can see photos of all the victims, and there is also a special area with photos of the ossuary, which is located intact at the special Mausoleum on the Kanales hill of Distomo. The museum also holds historical issues of newspapers and magazines of the time with related articles, photographs and documents.

Poetic scripts by the celebrated Greek poets Nikiforos Vrettakos and Andreas Tsouras, especially dedicated to the massacre of Distomo, hang on the wall.

A projection room for the screening of audiovisual material related to the Distomo massacre has also been set up on the ground floor, funded through a European programme. 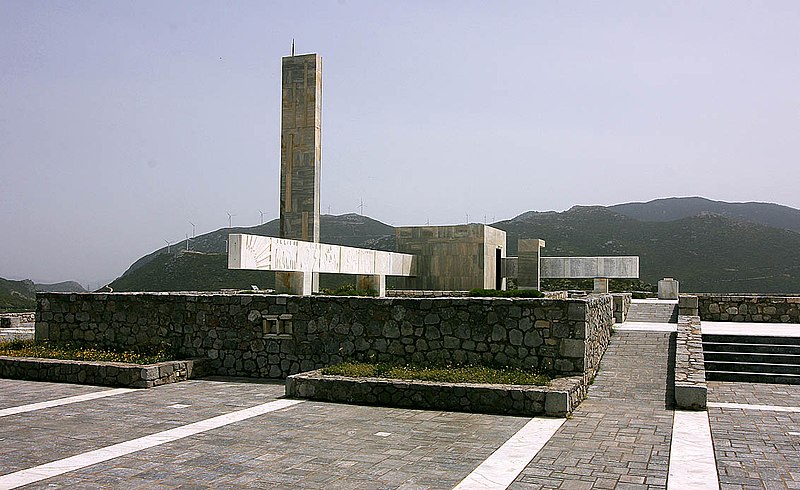 Memorial to the massacre of Distomo (by Dawetie via Wikimedia Commons)

The massacre of Distomo

On 10 June 1944, Distomo was the site of one of the most heinous crimes the Nazis committed against innocent women and children.

The Nazi occupying forces began with the execution of 12 hostages in front of the town school building. Soon after, at around five to five-thirty in the afternoon, one of the Nazi officers -according to some writers and historians (Lappas, 2001, p. 23) it was Köpfner, others say it was Hans Zabel (Basdekis, 1994), while others say it was Fritz Lautenbach (Mazower, 1994, pp. 239-240)- gave the order to commence the door-to-door massacre of the residents.

For over two hours, Waffen-SS troops of the 4th SS Polizei Panzergrenadier Division went door-to-door and massacred Greek civilians as part of savage reprisals for a partisan attack on the unit. A total of 218 men, women, children and babies were killed in Distomo on that day.

Through a BBC broadcast, the massacre became known around the world. A representative of the International Red Cross, who visited Distomo a few days later, estimated that the occupying forces killed as many as 600 people in total in the wider area.

Every year, on the anniversary of the massacre, the town holds memorial services and activities that last about 10 days.

Read also via Greek News Agenda: A Fair Claim for War Reparations; WWII Reparations: A view from Germany; Axel Sotiris Walldén on Greece and Sweden during the Axis Occupation and the military dictatorship; Hilary Roberts on German and British Photography in Greece 1940-1945

M. V. (Intro photo: Marble relief at the memorial to the massacre of Distomo [by AlMare via Wikimedia Commons])