Two centuries ago, in 1821, the Greek people started a revolution against the Ottoman Empire, which had occupied their lands for nearly 400 years, and on 15 January 1822 they officially declared their independence; but it wasn’t until 3 February 1830 (O.S.) that Greece was officially recognised as an independent, sovereign state with the signing of the London Protocol, an agreement between the three Great Powers.

After several unsuccessful rebellions throughout the Ottoman rule of the Greek territories (with the most important taking place in 1770-1771), the first thoroughly organised plan started to take shape in 1814, when the "Society of Friends" (Filiki Eteria) was founded in Odessa by Greek patriots. The Society initiated the War of Independence in the spring of 1821, with simultaneous uprisings breaking out across Greece, leading to some initial successes, such as the liberation of the Peloponnese, thanks to the element of surprise and the already weakened state of the Empire.

Ottoman retaliations soon dealt heavy blows to the rebels, which however also engendered sympathy for the Greek cause in Western countries, especially in the cases of civilian massacres. In 1825, the powerful armies of Ibrahim Pasha from Egypt came to the aid of the Sultan, wreaking havoc against the already depleted Greek forces and committing atrocities against the Greek population. The rebels would however keep up their resistance, until the European allied powers finally decided to intervene on the side of the Greeks.

Governments in the West, initially bent on neutrality, began to gradually shift their stance, motivated on the one hand by public opinion and the impressive wave of philhellenism, and on the other by changing views on the best way to further their interests in the region. Despite being a supporter of the maintenance of the Ottoman Empire, George Canning (British Foreign Secretary since 1822 and Prime Minister in 1827) increasingly endorsed the idea of an autonomous Greek state and lobbied to this end. Britain and France also feared that Russia’s ambitions in the region and its rivalry with the Ottomans could lead it to unilateral actions in support of Greece, and thus opted for a joint intervention that would better serve their own interests. 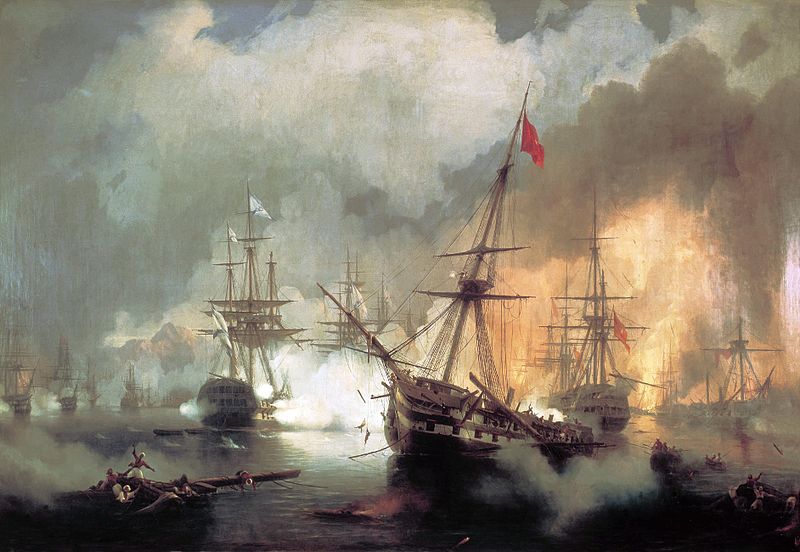 In 1827, the three Great powers of the time –the United Kingdom of Great Britain and Ireland, The Kingdom of France and the Russian Empire– began negotiations on a treaty to "re-establish peace between the contending parties by means of an arrangement". The Treaty of London, signed on 6 July of that same year, offered mediation by the three powers, calling for an immediate armistice and providing for the creation of a Greek state as "a dependency of Turkey". It was also stated that, if the Sultan refused the armistice, the Allies would use the appropriate force to ensure its adoption. The treaty was rejected by the Sultan, leading to the naval Battle of Navarino, on 20 October 1827, where the allied fleet secured a decisive victory against the Ottoman–Egyptian armada.

At the aftermath of the battle, the British Foreign Secretary and the French and Russian ambassadors to the court of St. James convened the London conference, to determine the borders of an autonomous Greek state.

Despite the heavy losses the Ottoman fleet suffered in Navarino, the High Porte refused to recognise any form of autonomy for Greece and demanded the full submission of the insurgents. The majority of the Greek lands were still occupied by Ottoman and Egyptian forces. After Canning’s death in August 1827 and his succession by the Duke of Wellington, Britain once again withdrew its support for an independent Greek state, for fear it would function as a Russian dependency, antagonising British maritime interests.

However, the concept of an independent state had already gained momentum, since (as C.P. Crawley has put it) each of the three Powers "was driven in that direction by the fear of allowing the other an excuse for further interference". Public opinion strongly supported the Greeks, and the outcome of the Navarino Battle had reinforced that sentiment. Also, since 3 April 1827, the Third Greek National Assembly (proto-parliamentary assemblies of the revolted Greeks) had created the office of Governor of Greece to preside over the Executive, to which it elected the then most distinguished Greek, Count Ioannis Kapodistrias, former Foreign Minister of Russia, a person with great diplomatic skills and international links.

In response to the Russian participation in the Navarino Battle, the Sultan closed the strait of Dardanelles (Hellespont) to Russian ships, leading to the Russo-Turkish War of 1828–1829, which ended in Russian victory. In August of 1828, after securing Wellington’s reluctant consent, a French expeditionary corps led by General Nicolas-Joseph Maison was dispatched in the Peloponnese with the aim of expelling the Ottoman-Egyptian occupation forces from the region; by early November, their goal had been achieved. The Greek forces had also begun recapturing the region of Central Greece.

The three former ambassadors to the High Porte were instructed to convene on the island of Poros, to reach a final agreement on the borders of Greece. Kapodistrias, who took part in the negotiations, proposed borders which would include a large part o modern-day Northern Greece. The ambassadors finally settled on a northern border which included parts of Thessaly and Epirus; they also proposed the inclusion of Crete. Wellington rejected the Conference's report, preferring to confine the nascent state to the Peloponnese.

On 16 November 1828, the three Great Powers signed the first London Protocol which created a tributary Greek state under Ottoman suzerainty, limited to the Peloponnese (then called Morea) and the Cyclades islands. However, the agreement was again rejected by the sultan.

The Protocol of 1828 was amended on 22 March 1829 by the signature of the second London Protocol, which largely accepted the Poros Conference's recommendations. The Protocol was signed by the British Foreign Minister, George Hamilton-Gordon, 4th Earl of Aberdeen, and the envoys of France and Russia, Jules de Polignac and Christoph von Lieven. According to it, Greece would enjoy complete autonomy under the rule of a hereditary Christian prince to be selected by the Powers, but would still recognise the suzerainty of the Sultan and pay a large annual tribute to the Ottoman Empire.

As the Russo-Turkish War continued, the Sultan faced several defeats and was compelled to sue for peace. On 14 September 1829 the two countries signed the Treaty of Adrianople, which forced the High Porte to recognise the autonomy of Greece and accept the decision which would be reached by the London Conference. On 12 September 1829, the Battle of Petra, where Demetrios Ypsilantis secured a glorious victory, was to be the last one in the Greek War of Independence. 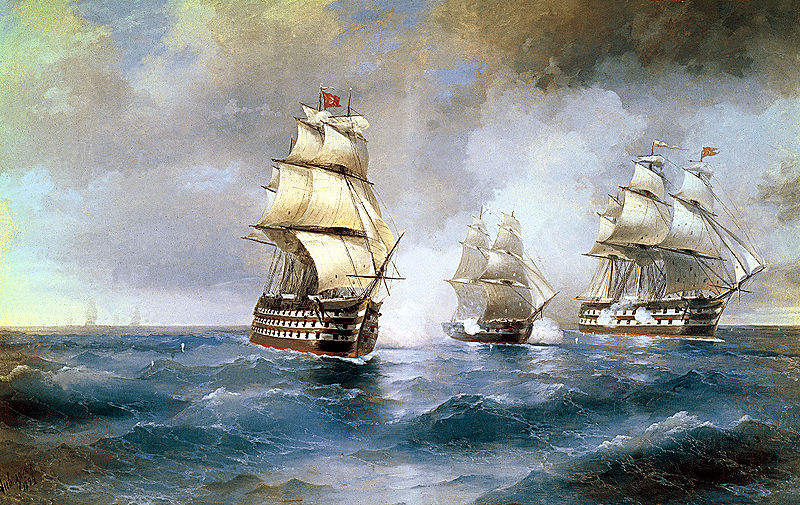 Kapodistrias was not satisfied with the decision for a vassal Greek state, and lobbied the Great Powers for Greek independence. Wellington was also eventually convinced that a partly autonomous sate would be under greater Russian influence than an independent one.

The second London Protocol was thus revised with the signing of the third London Protocol on 3 February 1830. In it, the plenipotentiaries of Great Britain, France and Russia declared Greece an independent, sovereign state under their joint protection. In the first of its 11 articles, it is proclaimed that "Greece shall form an independent State, and shall enjoy all the rights, political, administrative, and commercial, attached to complete independence".

The second article defined Greece’s borders, which were reduced to the Aspropotamos–Spercheios line. The three Powers also designated Prince Leopold of Saxe-Coburg (the future King of Belgium) as their choice of Sovereign Prince of Greece; Leopold declined the offer, due to the fact that the agreed borders fell short of those agreed to at the Poros Conference.

As long as the throne remained empty, Governor Kapodistrias was the head of the Hellenic State, dealing with important tasks, such as the establishment of an administration, basic infrastructure and the first Greek currency. After his assassination on 27 September 1831 (O.S.), he was succeeded by his brother, who resigned six months later; a series of collective governing councils were then established, and civil strife plunged Greece into confusion.

In May 1832, British Foreign Secretary Palmerston convened the London Conference of 1832, which established the Kingdom of Greece, once more revising its borders according to the Protocol of 1829. The throne was offered to the young Prince Otto of Wittelsbach, son of King Ludwig I of Bavaria, who had also been approved by the Fifth National Assembly at Nafplion. The decisions were ratified in the Treaty of Constantinople, by which the end of the war was officially declared and the Ottoman Empire officially recognized the independent Greek kingdom. Otto arrived in February 1833 and ruled as an absolute monarch, until the 3 September 1843 Revolution, which resulted in Independent Greece’s first constitution.

Read also via Greek News Agenda: "Greece 2021" | The celebrations for the 200th anniversary of the country’s Independence War; Ioannis Kapodistrias, Modern Greece’s first head of state; American and British Philhellenes; The Greek Revolution today: historiography and the public on the eve of 2021; The visual representation of the 1821 Greek War of Independence through the eyes of Greek and foreign artists