The medieval ghost town of Mystras 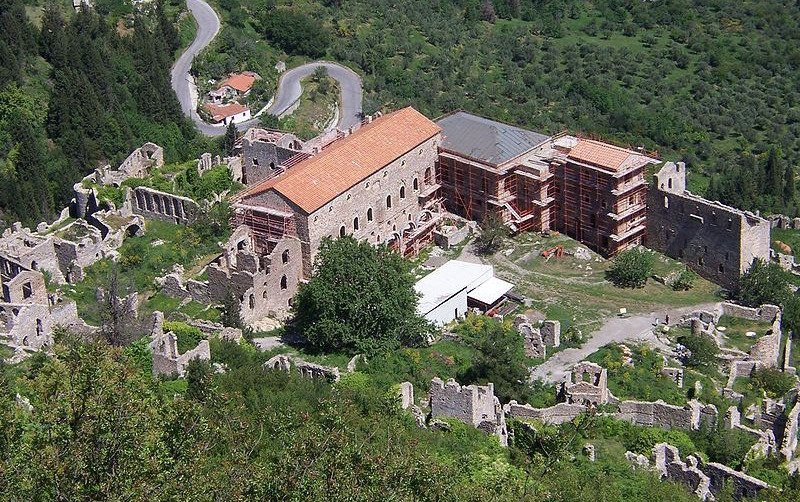 Mystras is an impressive fortified town in the southern Peloponnese; abandoned for nearly two centuries, it immerses the visitor to a bygone era. Considered a site of "Outstanding Universal Value", it was inscribed on the UNESCO World Heritage List in 1989.

History of the site

Often referred to as the "wonder of the Morea" (an older name for the Peloponnese), Mystras originated from a rock castle built by Frankish crusaders: by 1249, William II of Villehardouin had conquered the entire territory of the Peloponnese, and began the construction of a fortress on a peak, called Mystras (or Myzithras) by the locals, on the east side of the Taygetos Mountains, not far from the ancient city of Sparta.

About ten years later, Villehardouin was defeated and captured by the forces of Michael VIII Palaiologos – the founder of the Palaiologan dynasty, who would then reconquer Constantinople from the Latin Empire in 1261. In order to be released, in 1962 Villehardouin ceded Mystras (along with two other important strongholds, Grand Magne and Monemvasia) to the newly restored Byzantine Empire.

Mystras became the seat of the governor of the Byzantine territories in the Morea. As William of Villehardouin renounced his oath and armed conflict continued between Fρanks and Byzantines, more and more people from the region of Laconia built their houses around the fortress for safety. The town gradually grew and was eventually fortified. 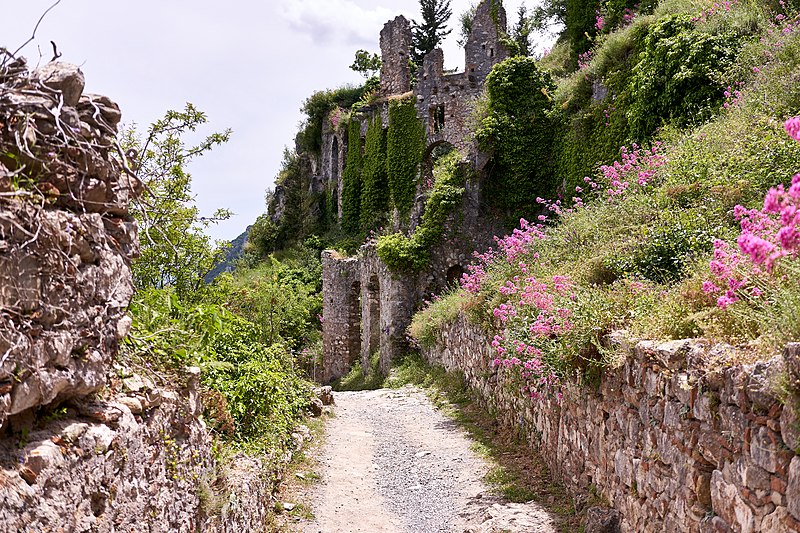 Inside the Castle of Mystras (by George E. Koronaios via Wikimedia Commons)

In 1348, the then-emperor John VI Kantakouzenos reorganised the territory as a the Despotate of Morea, with Mystras as its capital, to establish it as an appanage for his son Manuel Kantakouzenos, who became its first Despot; following the latter’s death, the Morea was seized by the rival Palaiologos dynasty, and the Despotate came under the increasing influence of Constantinople. Its population increased due to a large number of Albanian settlers in the region. The Despotate became an important centre for the arts and letters, attracting eminent scholars and architects of the time; it was also the hometown one of the greatest Byzantine philosophers, the Neoplatonist Gemistus Plethon.

Mystras was conquered by the Ottomans in 1460, following the fall of Constantinople in 1453, and became the seat of an Ottoman sanjak. The Republic of Venice would occupy the Peloponnese, establishing the Kingdom of the Morea from 1688 to 1715, when the region came once more under Ottoman rule.

It was repeatedly raided by Albanians following the Orlov Revolt of 1770; it was one of the first places to be liberated in the Greek Revolution of 1821, but was heavily hit during the invasion of Ibrahim Pasha in 1825. In 1834, the newly-appointed King Otto of Greece issued a Royal Decree founding the modern city of Sparta; the majority of Mystras’s population resettled there, while the rest set up their houses on the slopes of the hill, under the fortress, creating the modern village of Mystras, also known as Neos Mystras (New Mystras). 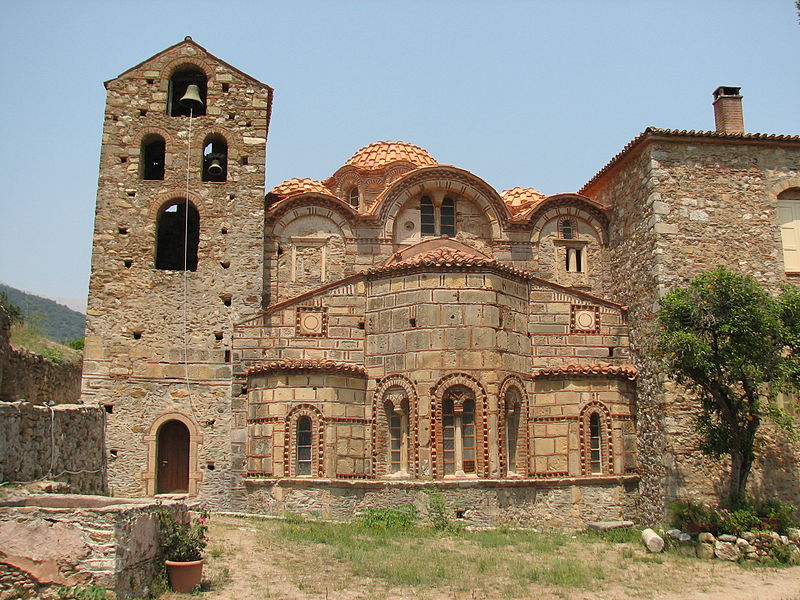 St Demetrios , Metropolis of Mystras (by Ed89 via Wikimedia Commons)

The Metropolis (Metropolitan Cathedral) or church of St. Demetrios, was originally built as a three-nave basilica a little after 1264, and took its current form in the second half the 15th century. A marble floor tile with a double-headed eagle in relief marks the spot where Constantine XI Palaiologos, the last Byzantine Emperor (and, until then, Despot at Mystras), was supposedly crowned. The church features impressive murals, and houses a small museum with sculptures, paintings and various relics.

The Peribleptos Monastery, is believed to have been established in the mid-14th century by the first Despot of the Morea, Manuel Kantakouzenos. It is built into the side of a cliff with a cave supporting the structure, in what came to be known as the "Mystras style", resembling a castle. Its extensive frescoes are attributed to artists of the Cretan and Macedonian art schools. These scenes depicted include the Ascension of Jesus, the Descent from the Cross, the Transfiguration and the Nativity.

The Pantanassa Monastery is the only monastery on the site still permanently inhabited. The nunnery’s name, Pantanassa, means "Queen of All", one of the traditional epithets of the Virgin Mary in Greek Orthodoxy. It was built around 1365 and consecrated in 1428. It features an ornate stone façade and sumptuous murals, including Assumption in the sanctuary and the Entry into Jerusalem in the central nave. It is the building with the most obvious Western influences in its architectural style. 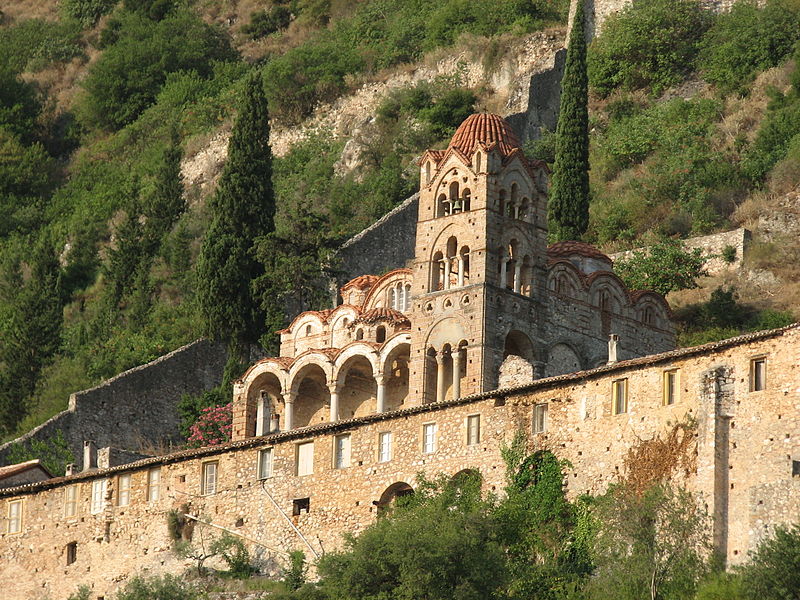 The Brontochion Monastery was built in the 13th century and used to be one of the wealthiest, featuring a renowned library. Important figures, such as Plethon, would offer their teachings there. Its katholikon, dedicated to Panagia Hodegetria ("Our Lady of the Way"), is also called Afendiko. It is a basilica form with five domes and walls are covered with marble. Chapels were later added to the narthex.

The Church of Hagia Sophiaia was the katholikon of the Monastery of Christos Zoodotes ("Christ the Giver of Life") founded by Manuel Kantakouzenos around 1350. It is a cross-domed building with a two-storey porch.

Finally, the Church of the Hagioi Theodoroi is believed to be the oldest one in Mystras, built before 1296 in the octagonal style. Two chapels have been incorporated on its Western side, with one housing the tomb of Manuel Palaiologos.

Originally published on Griechenland Aktuell by A. Lambrou. Adapted into English by N. Mosaidi. (Intro photo: General view of the Palace of Mystras [by Aeleftherios via Wikimedia Commons])

Read also via Greek News Agenda: Early Christian and Byzantine Monuments of Thessaloniki; The Monastery of Daphni: retracing the city's Byzantine past; Three religions meet in the Castle of Ioannina; The historic Sumela Monastery in Trabzon; Beyond Socrates - Greek philosophers you might not know