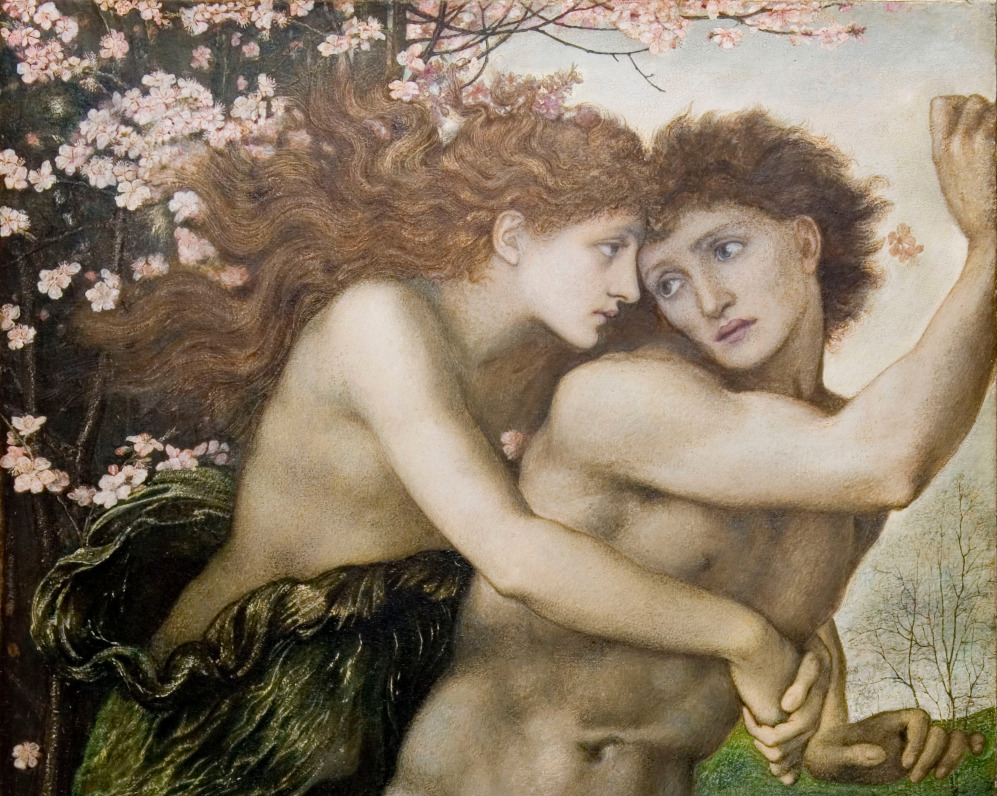 In Greek mythology, as in many myths and popular folk traditions around the world, plants, rivers, lakes and other elements of the natural world are viewed as animate beings. They may be personified in the form of deities, as in the case of river gods, or believed to be inhabited by spirits such as nymphs, naiads and dryads and hamadryads – the latter two being specifically linked to trees.

The almond tree, which has existed in Greece since the antiquity, is the first deciduous tree to flower, usually in February or even January if the weather is mild; it has thus been particularly associated with the rebirth of nature and undying hope, giving rise to myths linked to its early bloom.

According to myth, Demophon (or Demophoon), son of the legendary hero Theseus, took part in the Trojan War together with his brother Acamas. On his way back home to Athens, he made a stop in Thrace (northern Greece) where he met Phyllis, daughter of the Thracian king Sithon. They fell deeply in love and got married, but soon Demophon had to resume his journey to Athens, where his father Theseus was awaiting. Phyllis agreed to let him leave, making him however promise to soon return for her. 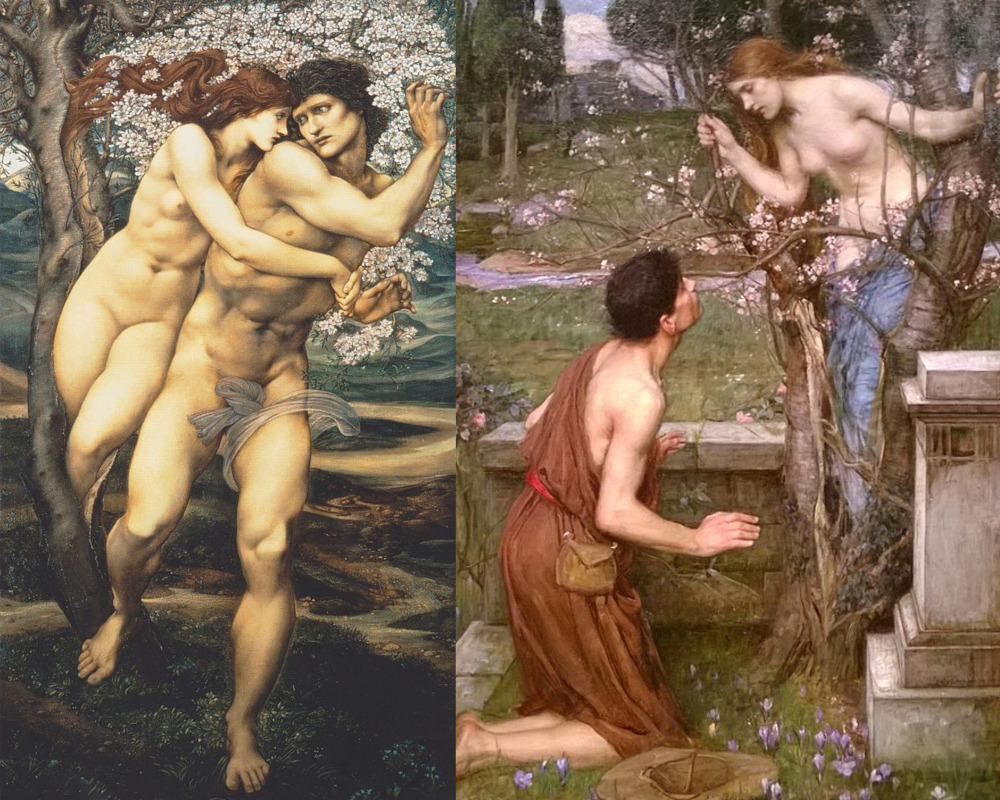 There are several versions of how the couple’s story unfolded. According to one, Phyllis gave her husband a small casket, telling him that it was a sacred object of the goddess Rhea, and that he should not open it unless he completely gave up hope of ever coming back to her. Demophon’s ship was however caught in a storm and ended up in Cyprus. There, he opened the box and faced some horrendous vision, which prompted him to mount his steed and ride as fast as he could, eventually falling off the horse and onto his sword. After waiting for her beloved for some time, Phyllis is said to have either hanged herself from a tree or withered away in despair.

According the most famous version, Demophon made it to Athens, but was held there longer than he expected. The gods took pity on forlorn Phyllis, who faded from grief, transforming her into a tree. Yet the tree remained dry and barren, as Phyllis’s soul was in mourning. At long last, her beloved made his way back to Thrace, only to find the dead almond tree in her place. Filled with sorrow and regret, he wrapped his arms around the dry trunk, and cried hopelessly. Warmed by his embrace and watered by his tears, the tree immediately blossomed and was filled with small white flowers.

The myth of Phyllis and Demophon is mentioned by Alexandrian poet Callimachus in his poem Aetia, which encompasses a large collection of origin myths, and is also the subject of the second poem of Ovid’s Heroides, a collection of fifteen epistolary poems presented as though written by a selection of aggrieved heroines of Greek and Roman mythology in address to their heroic lovers. 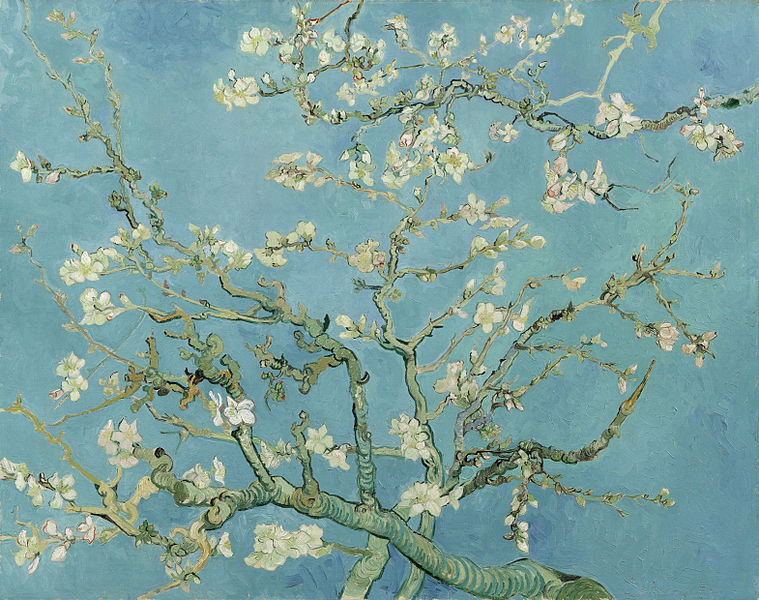 Another legend linked with the almond tree is the myth of the gods Agdistis and Attis, which are deities of Phrygian origin, later also venerated by Greeks and Romans. Greek traveler and geographer Pausanias relates a tale from Phrygia, where the king of the Gods, Zeus, following a nocturnal emission, impregnates Gaea (the embodiment of the Earth) and she gives birth to a superhuman being, called Agdistis, which has both male and female reproductive organs.

According to Pausanias, the gods feared the hermaphrodite deity, and used deception to make him/her cut off his/her male member. An almond tree sprung out at the spot where the genitals (or the blood from the wound) fell on the ground. Later, the nymph Nana, daughter of the river-god Sangarius, gathered almonds from the tree, and stored them in her bosom. The almonds disappeared, and she became pregnant with a child, Attis, which she abandoned after birth. (In other versions of the myth, Attis was born directly out of the almond.)

Growing up, Attis became a man of extraordinary beauty, and Agdistis fell in love with him, be he was betrothed to the daughter of a king. Agdistis appeared at the wedding, and caused all the guests to be seized by a fit of mania, causing both Attis and his father-in-law-to-be to castrate themselves. Agdistis then repented, and obtained from Zeus the promise that the body of Attis would not decompose.