“Memories of Dictatorship”: A Greek Film Archive Tribute under the Auspices of the General Secretariat for Public Diplomacy and Greeks Abroad of the Ministry of Foreign Affairs 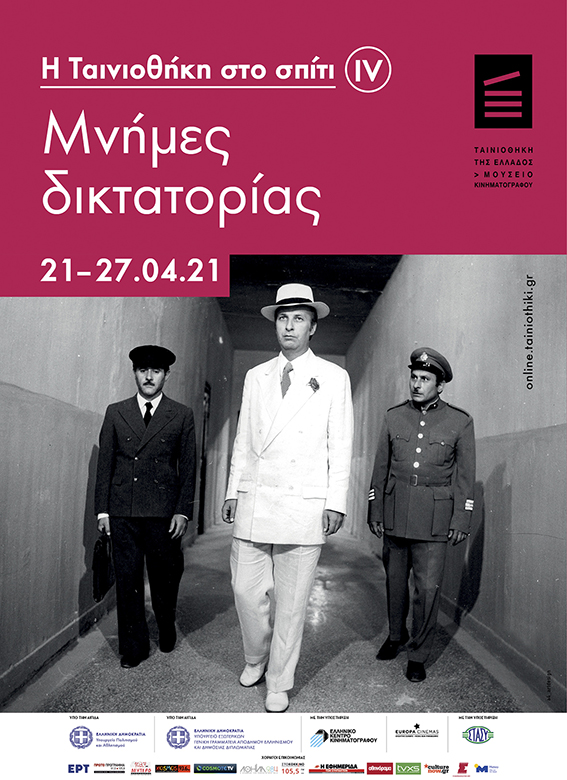 The General Secretariat for Public Diplomacy and Greeks Abroad of the Ministry of Foreign Affairs, continuing its successful cooperation with the Greek Film Archive that was launched with the "The Greek Film Archive at Home" series of screenings, and aiming at promoting rare and historical Greek films of Greek cinema to Greeks around the world, has placed under its auspices the fourth cycle of online screenings of Greek films dedicated to the 54th anniversary of the tragic coup of April 21, 1967, titled "Memories of Dictatorship".

The tribute runs from Wednesday 21st April, until Holy Tuesday, 27 /4, available at online.tainiothiki.gr. The previous three rounds of screenings were viewed by a high number of Greeks abroad. The “Greek Film Archive at Home” series reached 36.660 video views in April and May of 2020.

As program curator Maria Komninos has noted, “during the dictatorship, but also in the years preceding it, an alternative cinema emerged in Greece, substantively different from the predominant model of commercial Greek cinema, which during the seven-year-period made its mark against the regime’s propaganda films, which glorified the army. Political cinema, as Aglaia Mitropoulou emphasized, flourishes under oppression… And in those years, important films were created, which in an allegorical way spoke about the political situation in Greece. During the dictatorship in Greece, books, Greek program radio broadcasts from abroad, journals, and, of course, this new cinema, were the loci where an oppositional public sphere emerged. This is the moment of birth of “New Greek Cinema”, in which the oeuvre and the personality of Theo Angelopoulos acted as the catalyst. The audience will have a rare opportunity to watch these landmark films by some of the most important Greek film directors.

11 narrative fiction films and 2 documentaries will be screened. All films will be available online, for30 hours after initial viewing(from the moment you press play) and will be screened for 7 days, without geo-blocking within the limit, of course, of 600 free viewings per film.

On Thursday 22nd April, at 7 pm, a webinar will be held on the subject of Greek cinema during the dictatorship. Pantelis Voulgaris, Yiorgos Tsemberopoulos, Yiorgos Stamboulopoulos, Thanassis Rentzis, Kyriakos Aggelakos, Nikos Kavoukidis, and Evanna Venardou will participate, with Maria Komninos, president of the Greek Film Archive coordinating the discussion.

You can register at https://us02web.zoom.us/webinar/register/WN_chMw5_PQS_6oau4Mn-95_Q

A timid young English teacher is hired as a private tutor to the daughter of a nouveau riche family, who have arranged her marriage to an English businessman. The teacher falls in love with his student and becomes involved in a triangle with the mother and daughter. Realizing the futility of this relationship and disillusioned by society’s hypocrisy, he resolves to reject this social order and to emigrate.

It is a testimony to the pre-dictatorial political situation in Greece, and a satire on the up-and-coming, nouveau-riche of the 60s.

The shooting of this film began in the summer of 1966 in Crete and was completed, after many revisions to its screenplay and original outline, in London, during Nikos Koundouros’s self-imposed exile during the dictatorship. It is a story of “cannibalism”, focusing on an attractive female, who, like a medusa or spider, devours any male without inhibition. One day, Philipos sees her through a half-open door in the arms of his younger brother and backs away discreetly so that they do not notice him. A few days later, on a trip to the Greek islands, his younger brother disappears…
As the film director had noted, “[the film] bears the birthmark of an agitated period, as was the case just before the dictatorship”. 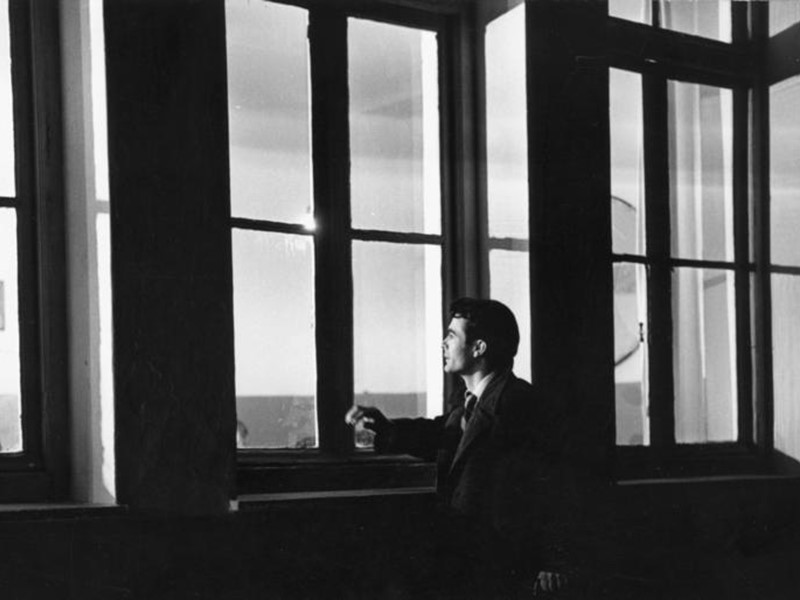 Filmed during the dictatorship and censored by the regime, the film by Yiorgos Stamboulopoulos tells the story of a young lower-middle-class man, born at the time of the German Occupation and prepped by prevalent circumstances to compromise for ease and comfort. The young man tries to suppress his thoughts and instincts, looking for some sort of escape in various romantic affairs, until he meets an activist young teacher. 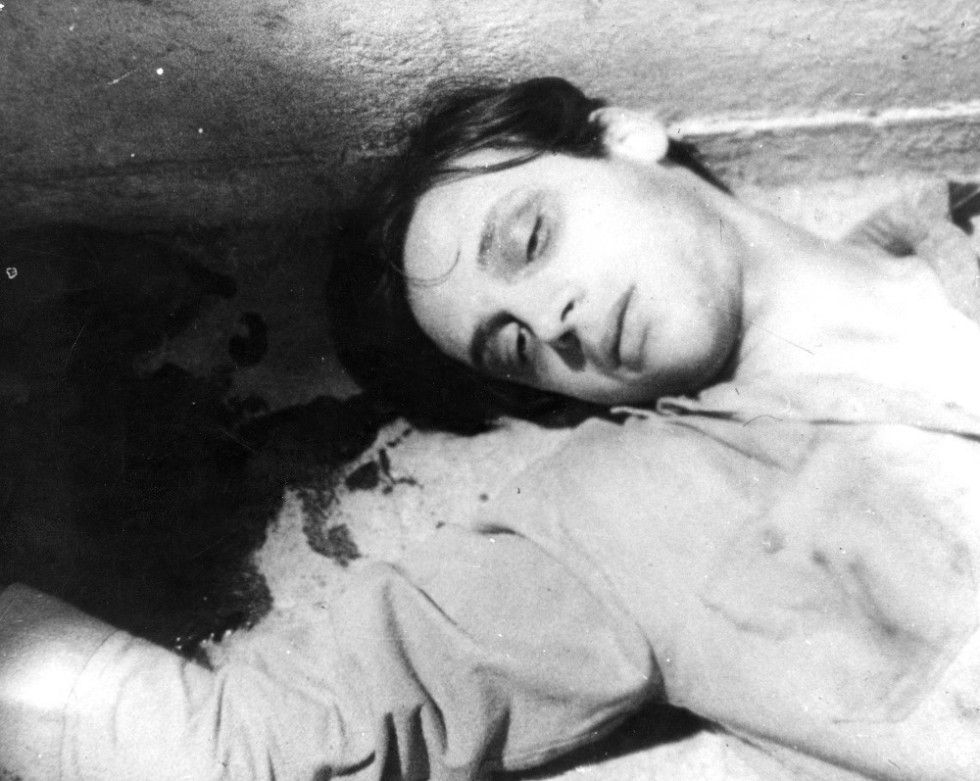 The film is inspired partly by the well-known Polk affair – i.e. the murder of American journalist George Polk, who had come to Greece during the civil war to interview the military leader of the communists Markos Vafeiadis and was found dead under mysterious circumstances - and partly by the recent at that time six-day war (5–10 June 1967). In the film, a journalist of democratic leanings, Aimos Vagenas, is arrested and accused of being involved in Polk’s murder, with whom he was friends. His guilt cannot be proven, and so he is temporarily set free. Following his journalistic instincts, he starts investigating the murder of which he was accused, but realizes that the authorities’ sole aim is to cover up the truth and mislead the public. The film, clearly influenced by French-Swiss film director Jean-Luc Godard, is the first depiction of the student movement and the police’s authoritarian practices.

A trade unionist is assassinated at a workers’ rally and Sofianos, an ex-police informer who has fallen into disfavour, is arrested and charged with the murder. Sofianos desperately tries to prove his innocence, but to no avail. When he is visited in prison by a conservative Member of Parliament, he uses a smuggled gun to take the politician hostage—threatening to kill him if he is not released. It is the eve of the 1936 elections, and the Metaxas regime, barely holding on to power, thanks to a difficult compromise between the right-wing and centrist forces, is faced with a dire dilemma: If they allow the assassination of the MP they will lose right-wing support, but if they accept Sofianos’ blackmail and set him free, they will lose the support of the centrists.

A journalist (Alexis Damianos) tries to explain the murder of a girl by her lover followed by his suicide. Examining the man’s past, he discovers that he had an unsuccessful marriage and was living in untold loneliness and desperation. An innovative, landmark film that looked at how the rapid and violent changes taking place in Greek society affected people’s behaviour and psychology.

"THE MATCHMAKING OF ANNA" (1972), Pantelis Voulgaris

Anna, a maid in a middle-class Athenian household, is reluctantly introduced to her prospective husband Kosmas by the family she works for in an arranged marriage setup. The two meet and spend their Sundays together happily. In the aftermath of the matchmaking however, the family realizes that they will thus lose her services for good threatening their ease; thus they resolve to dissolve the matchmaking agreement by exerting on her psychological pressure. Anna is dragged back to her dull, miserable everyday reality and a lifetime sentence of domestic servitude. Voulgaris weaves a sharp and truthful account of the relationship between submission and power, whilst analyzing urban society of the early 70s. 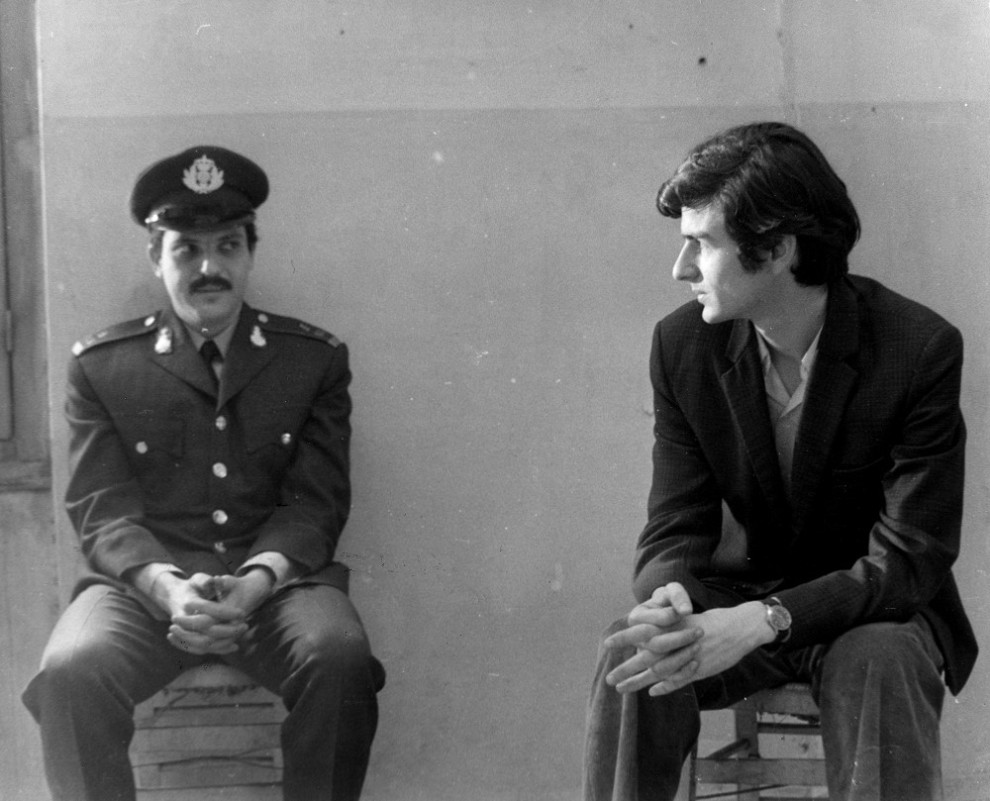 Athens, midnight; on a deserted street, a beautiful woman named Eleni Chalkia is fatally stabbed by a stranger, who immediately disappears into the shadows of the night. Ioannis Zachos, a mentally unstable young man, often fantasizes about killing beautiful women, confirming thus his fragile masculinity and his passion for power. When he is arrested, he immediately confesses his crimes, to the great relief of the police, who have been accused of gross ineptitude by the Press. During the trial that follows, he acts out falling into serious contradictions. The struggle to find the truth remains unresolved, revealing however in great detail the clash of the individual with society. 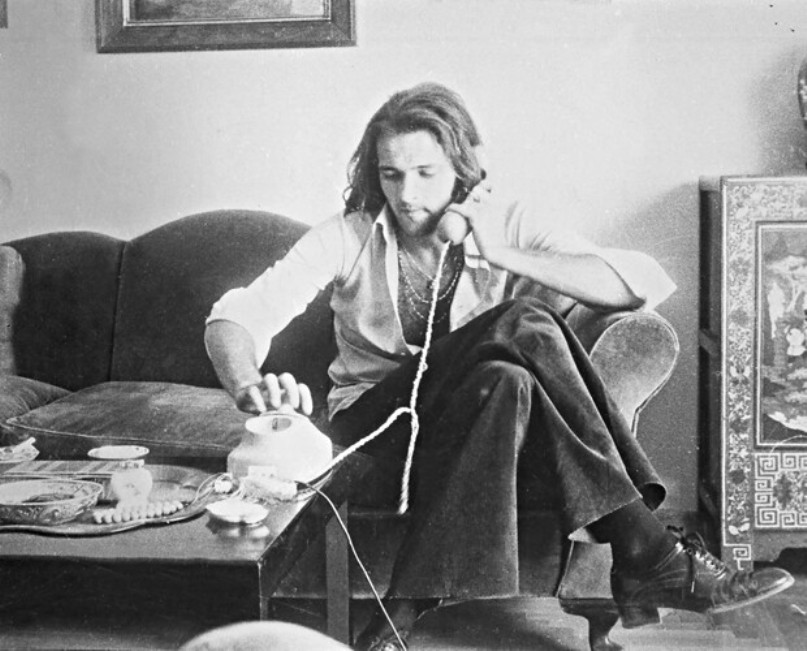 A young man (YiorgosTsemperopoulos) arrives in Athens to study at the School of Fine Arts. He doesn’t let the events of the Athens Polytechnic uprising in November 1973 affect his studies, and he also begins an affair with a girl. Initially, he gets a job in a gallery and then in an advertising company. 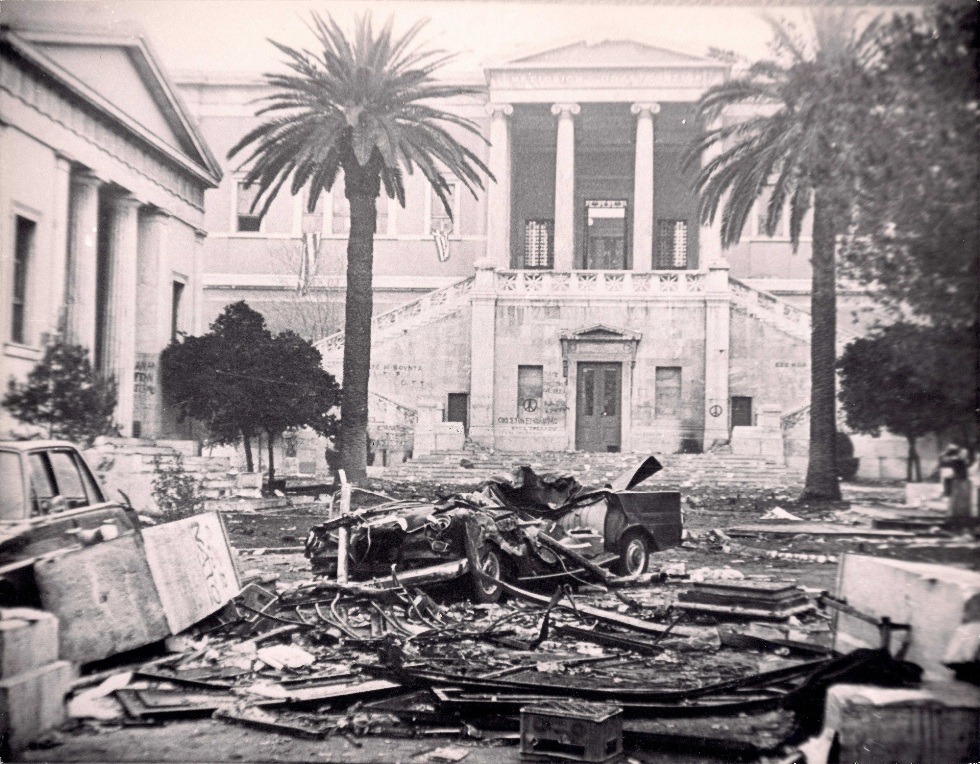 The documentary is about the struggle of olive growers in Megara to fight the Junta’s decision to expropriate a large agricultural region for the installation of an oil refinery. The last part of the film documents how the peasants, after hearing the court’s decision to support the expropriation, join in protest the uprising of the Polytechnic School in November ’73. The resistance of the people of Megara and the victorious (?) outcome of their struggle was the first mass manifestation of opposition to the dictatorship and “Megara” left its mark, in the chronicles of Greek cinema history, as one of the most important modern documentaries. The film was shot at a time when Ecology and the Environment were unknown words in the political agenda. 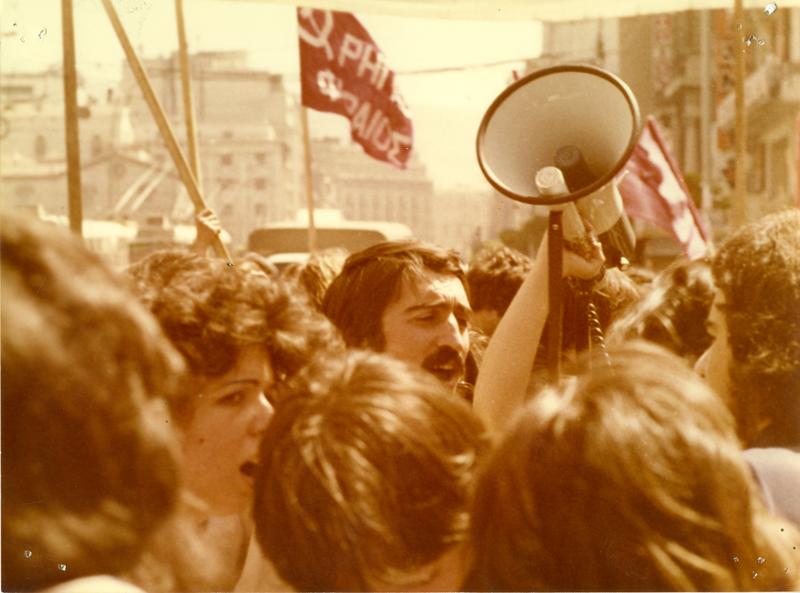 An important chronicle connecting the student and other activist movements in the period following the fall of the military regime of 1967–74 (metapolitefsi, i.e. regime change) with the anti-dictatorial struggle, presenting people and events related to the most important political developments. The film captures events at the time and looks back to the past to shed light on the contemporary historical juncture, commencing with the Polytechnic Uprising until August 1975.

A love story set in Athens in 1977, between a female left-wing journalist and a stage actor who has abandoned the theatre. The film borrows its title from a hit by singer Mitropanos, “All of my life I remember you leaving”. Politics, the Left, the creator’s artistic impasse, theatre, the relations between a man and a woman with the man always abandoning the girl, as the title of the film (and the song) suggests. The director, who took an active part in the anti-dictatorial struggle, depicts in detail a specific generation at a specific point in time - that of the regime change. 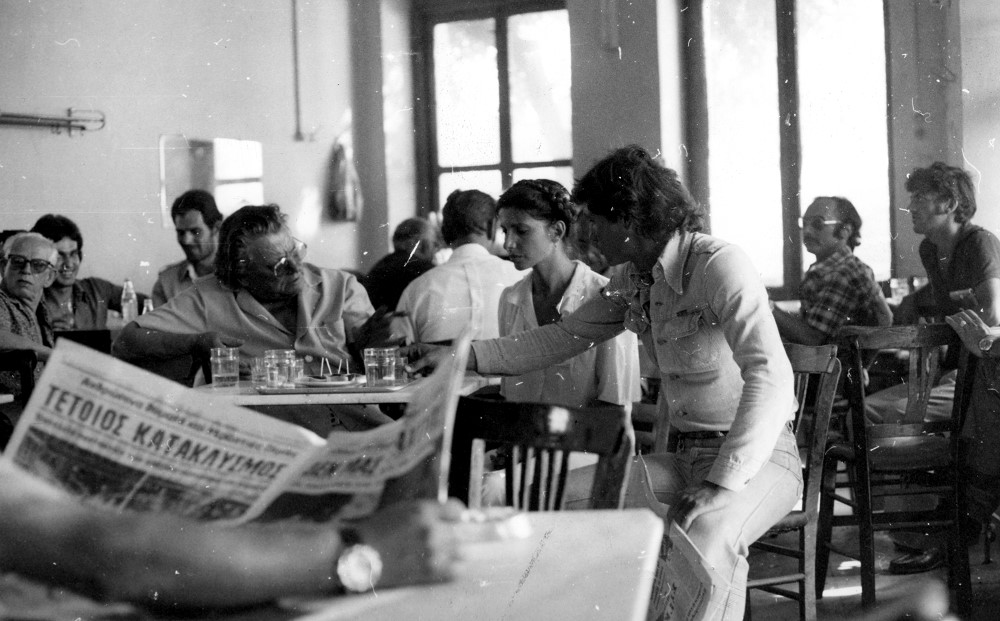 The film tells the parallel stories of two people who live in the same block of flats in Athens during the 1950s. Antonis is a former fighter in the communist movement who now, following the movement’s defeat, tries to live by whatever means are offered him in post-war Greek society, slowly abandoning the struggle, his dreams and ideology. Eftychis, who enjoys a life of prosperity, moves about in the same circles and has aspirations to succeed in life. With the little money that he has from his wife’s dowry, he convinces Antonis to set up a textile mill—an enterprise through which both will see their dreams shattered and suffer the consequences of the ill-fated project.