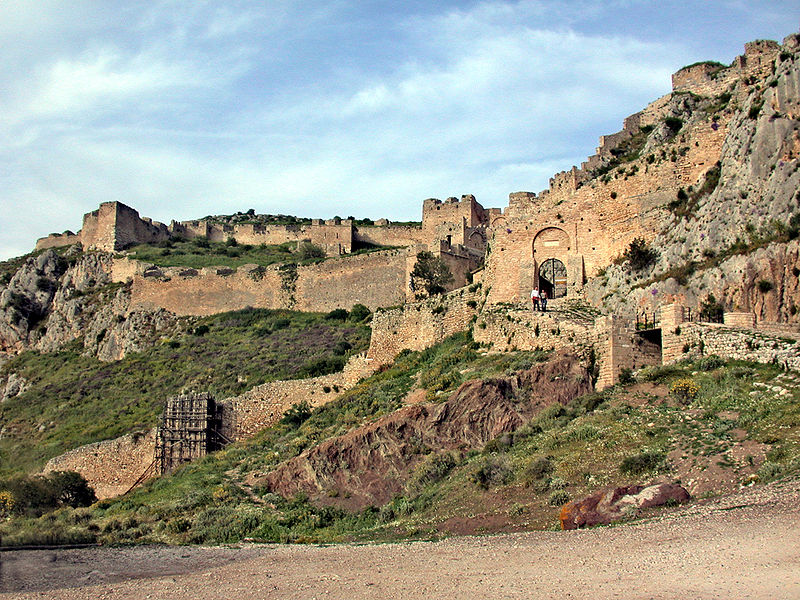 At about 80 km from Athens, where the Peloponnese peninsula starts, an imposing fortress stands on the Acrocorinth, the acropolis of ancient Corinth. The archaeological site, sitting on a 575-metre monolithic rock that dominates the plain, offers an extraordinary view towards the sea and has a history steeped in legend.

The Acrocorinth was continuously occupied from the archaic period until the early 19th century. Its fortress, one of the most impressive ones in Greece, is built on foundations dating from the Hellenistic period (3rd century BC). At that time, the city of Corinth was (together with Demetrias in Thessaly and Chalcis on the island of Euboea) one of the three "fetters of Greece", that is, garrison points used by Philip V of Macedon to control the Greek city-states.

In the 2nd century BC, the acropolis came under Roman rule, and the fortress was restored by Julius Caesar in 44 BC. In the Byzantine Era it was again reconstructed during the reign of Justinian the Great. In 1209, it was conquered by the Franks, following a years-long siege; several restorations date to its Frankish rule. It was again conquered by Theodore I Palaiologos, thus becoming part of the despotate of Morea, although briefly ceded to the Knights Hospitaller of Rhodes. 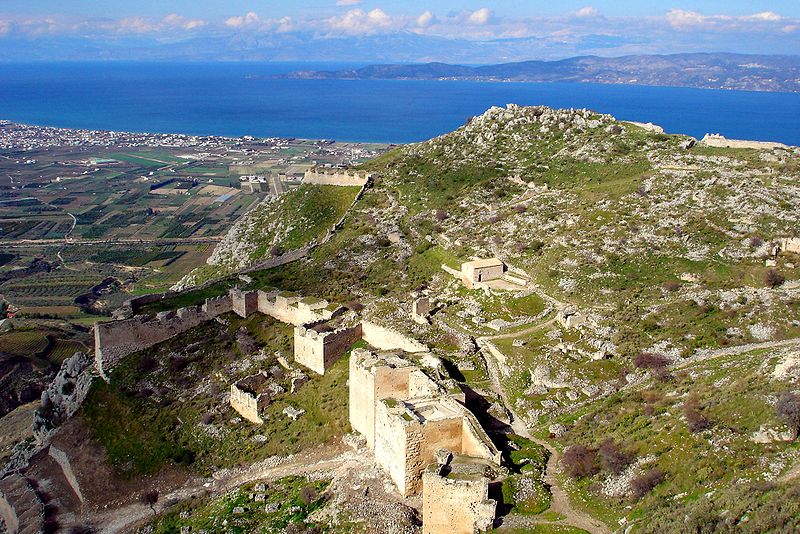 View of the Acrocorinth fromthe south (by Vancouverquadra via Wikimedia Commons)

In 1458 it fell to the hands of the Ottomans, following the fall of Constantinople in 1453. During the Venetian occupation of the Peloponnese, the Acrocorinth became part of the Kingdom of the Morea, until it was again seized by the Ottomans in 1715; its current form dates to the fortress’s reconstruction by the Venetians. The Greeks liberated the acropolis of Corinth in 1821, following the outbreak of the Greek War of Independence and, although later reconquered by Dramali, it was again besieged by the Greek forces and eventually surrendered by the Turks to Theodoros Kolokotronis in early 1823.

Today, the marks of different periods are evident in the fortress’s interior: walls of Byzantine houses and churches stand next to ruins of old temples, Venetian towers and Ottoman mosques.

The area of Corinth has been inhabited since the Neolithic Age; as an ancient kingdom, it features prominently in Greek mythology, and so does its acropolis. The Peirini Fountain, situated on the Acrocorinth, was said to have been created by the tears of the eponymous nymph, after the death of her son. According to another legend, Pegasus, the winged horse that sprang from the blood of the dying Gorgon Medusa, created the stream by striking its hoof on the ground; according to a different version, the Pegagsus quenched its thirst for the first time at spring, where it was caught by the hero Bellerophon, a Corinthian prince, who used the mythical creature to help him slay the dreaded beast Chimera.

The area was said to be dedicated to either Helios (the sun god) or Apollo, also a god of light, who in turn gifted the site of the Acrocorinth to the goddess Aphrodite. In her honour, Medea (granddaughter of Helios and wife of Jason the Argonaut) built a temple to Aphrodite on top of the Acrocorinth. This was the most famous and important of Aphrodite’s sanctuaries, known for the alleged practice of "sacred prostitution".

N.M. (Based on the original article from Grèce Hebdo; Intro image: Fortress of Acrocorinth [by MM via Wikimedia Commons])