Just a few meters away from the Greek Parliament’s building - right behind the Tomb of the Unknown Soldier on Amalias Avenue- lies the National Garden of Athens which, together with the Ζappeion Hall, covers 24 hectares full of vegetation, rare kinds of plants, saplings, and birds. In fact, the National Garden is like an oasis of green in the heart of bustling downtown Athens. As Henry Miller wrote in 1939:

"It remains in my memory like no other park I have known. It is the quintessence of a park, the thing one feels sometimes in looking at a canvas or dreaming of a place one would like to be in and never finds." 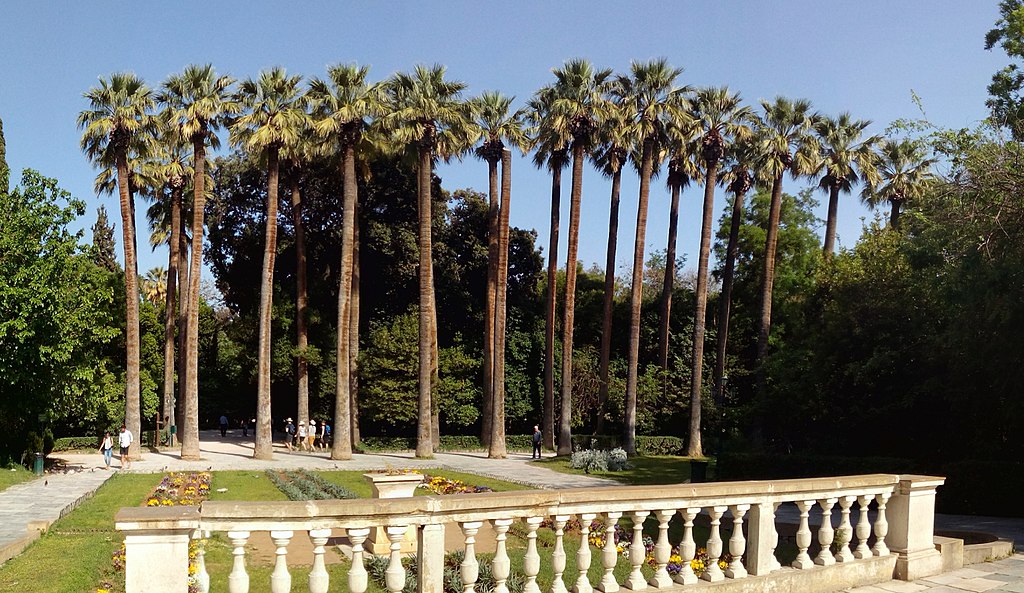 To find out a little more about the National Garden’s history, one has to go back to the times after the Greek Revolution in 1821. Commissioned by the newly appointed Queen Amalia in 1838, the National Garden, which at the time was the Royal Garden, was completed by 1840 by German agronomist, Friedrich Schmidt; he imported more than 500 plant species from Greece and around the world, including many tropical plants. Unfortunately, over time, some of these plants didn't survive the Mediterranean climate, but those who have survived, create a lovely environment to relax.

The numbers speak for themselves. Nowadays, the garden is home to 7,000 trees, 40,000 bushes, and other plants, making up 519 species and varieties. More than 100 of them are Greek, with Judas trees, oleanders, and carob trees the undoubted “stars”, while others come from countries all over the world, such as Australian pines or Chinese trees-of-heaven. Centenarian holm oaks, cypress trees, and Canary Island date palms are also among the plants that have been a feature of the garden since it was first created. 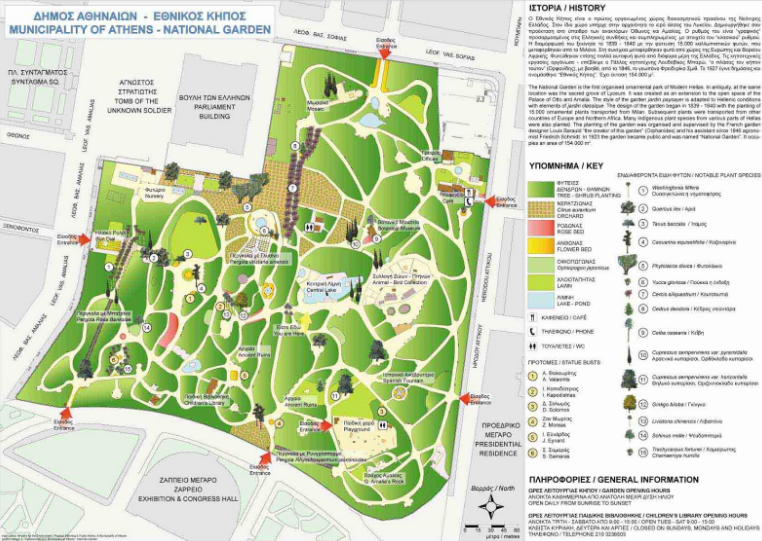 Another feature of the Garden is its narrow labyrinth paths, its wooden benches, and the small lakes in between. It hosts a small zoo, a Botanical Museum, and a conservatory which is the place where plants are initially cultivated before being replanted in the garden - considered to have been the country’s very first working greenhouse. Moreover, it hosts the Camp of the Evzones, a children's library with more than 6.000 books, a playground, and a small café, while particularly popular are also the duck pond and the sundial, a traditional method of telling the time.

Deemed as a historical landmark, the National Garden also encloses ancient ruins, Corinthian column capitals, as well as mosaics, and other features; more specifically, one of the most amazing finds in the garden is the Roman floor, uncovered -during 19th-century excavations- at a depth of one meter, belonging to the courtyard of a Roman villa very near from what is now the entrance on Vasilissis Sophias Avenue. On the southeast side is the bust of Ioannis Kapodistrias, the first governor of Greece, while on the Southside is the bust of celebrated Greek poet Dionysios Solomos, author of the Greek National Hymn. 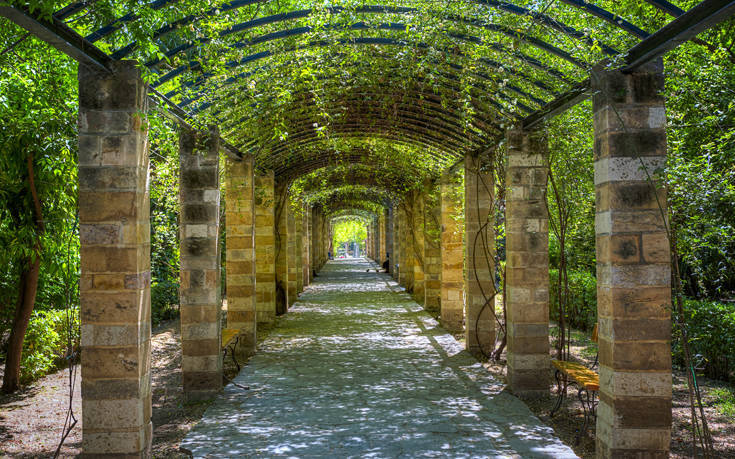 The Zappeion Hall, though officially separated from the National Garden, is effectively an extension of it. The building’s architect, Theodore Hansen, had also designed the layout of the Zappeion’s Gardens. However, according to architectural historian Constantine E. Biris, the design was executed by the French Architect Desire Matton incorporating some changes; thus, the Zappeion Gardens, initially in French geometrical style, were later redesigned in the free curved lines of the English garden.

Special mention should be made to its decorous courtyard boasting statues which recall recent Greek history, not to mention mythology. Busts of politicians, kings, and historians; mischievous-looking satyrs emerging from the bushes; and little Eros statues lurking coyly, arrows at the ready make a quite enchanting collection of sculptures. One stands out for its beauty and detail, created by Henri Michel Antoine Chapu, Jean Alexandre Joseph Falquiere, and Lazaros Sohos: the figure of English poet Lord Byron, with the personification of Greece placing a wreath on his head as a token of honor and gratitude for his contribution to the struggle against the Ottomans. 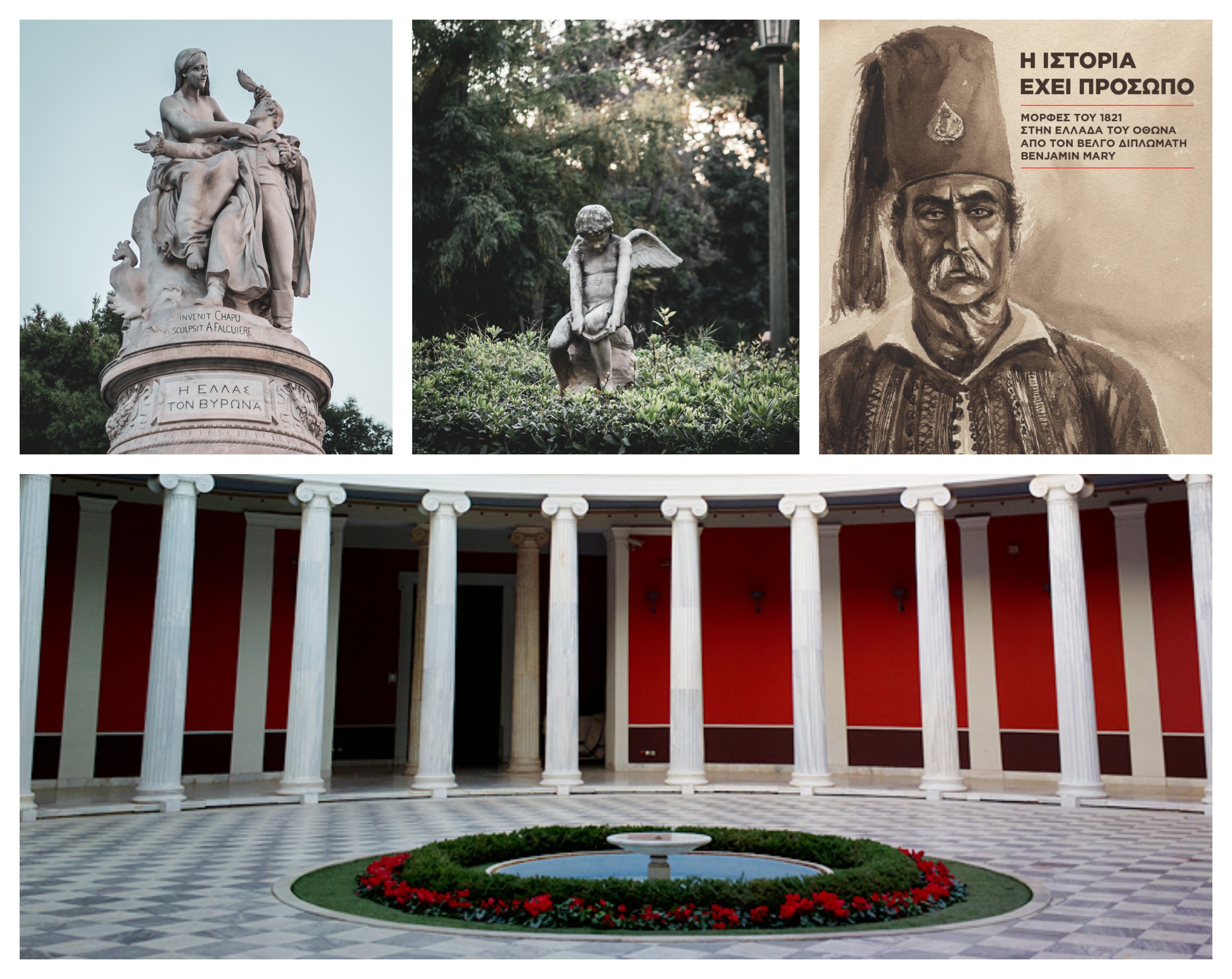 The country’s independence war is also commemorated through the temporary exhibition ‘History Has A Face’, in collaboration with the National Historical Museum, the Sylvia Ioannou Foundation, and the Municipality of Athens. More specifically, as of February 2021, the portraits of 22 heroes of the Greek Revolution - drawn mainly in Athens, between 1839 and 1844, by Benjamin Mary (1792-1846), a Belgian diplomat in Greece- adorn the National Garden wall facing Vasilissis Sofias Avenue, as part of “Greece 2021” celebratory projects.