The castles of Methoni and Koroni 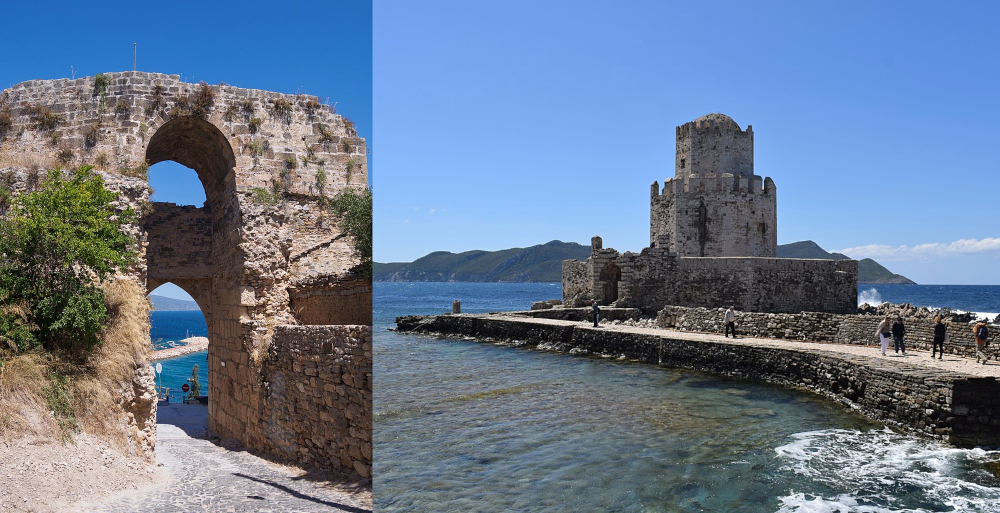 Greece is particularly famous for its antiquities, dating from the Bronze age to the Roman times; however, it is not as widely known that there are about 800 Medieval castles and fortresses in various parts of Greece, dating to the times of the Byzantine Empire but also of Frankish, Venetian and Ottoman rule. Among these impressive fortifications, the castles of Methoni and Koroni, on the southwest peninsula of the Peloponnese, are among the most majestic and reputed in the country.

Following the dissolution of the Byzantine Empire by the Fourth Crusade in 1204, the Republic of Venice captured the largest part of the Peloponnese (Morea at the time); soon, the French knight Geoffrey I of Villehardouin set out a campaign to conquer the peninsula on his own account, and became Prince of Achaia, but the Venetians managed to establish the rule of two strategic positions on the southwestern edge of the Peloponnese: the forts of Modon and Coron, as Methoni and Koroni were known in Italian. Villehardouin officially recognised this in the Treaty of Sapienza in June 1209. The Venetian rule of the region lasted for about three centuries, until its final conquest by the Ottomans.

The Castle of Methoni

The castle of Methoni is one of the most important fortifications in Greece and among the largest ones in the Mediterranean. It was built by the Venetians after took over the area, on a rock jutting out into the sea, separated from the land by an artificial moat. According to the Ministry of Culture, it is a typical example of fortified city occupying the entire area on the SW coast of the Peloponnese, with a natural harbour that, in medieval times, served as a stop for pilgrims on their way to the Holy Land and for merchant ships on the East–West trade routes. Methoni knew its heyday in the period of Venetian rule.

Methone has been identified with the vine-covered Pedasus, one of the seven cities offered by Agamemnon to Achilles to soothe his wrath and to convince him to return to the Siege of Troy (although Koroni has also been suggested as the true site of Pedasus). It is also referred to by the Roman-era Greek geographer Pausanias as "Mothoni".

During Roman times the city gained its autonomy from the emperor Trajan and was strengthened with better fortifications. During the Byzantine era, it was still an important harbour and the seat of a bishop. In the 11th century, the Venetians gained privileges regarding the free movement of their goods in various port cities of the Byzantine Empire, including Methoni. After the Venetians took over the town in 1209, Methoni evolved into an important commercial centre and a major stop for all Venetian ships travelling to the East. 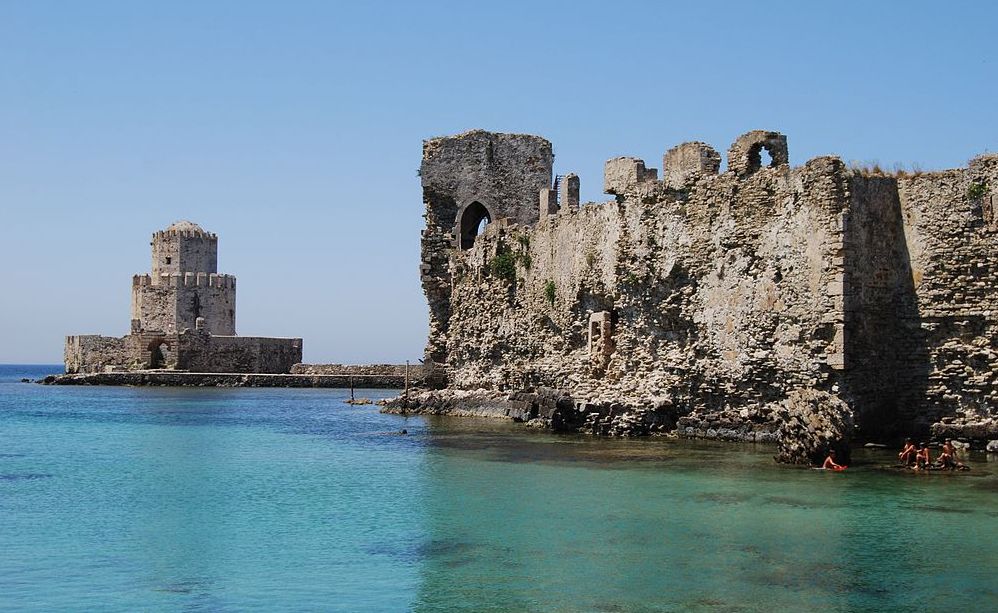 In 1500, Sultan Bayezid II besieged and eventually conquered Methoni, killing all the inhabitants or selling them to slavery. In 1532, the Knights Hospitaller briefly recaptured the fortress but it soon fell to the Ottomans again. In 1686, Venetian forces under general Francesco Morosini conquered Methoni back from the Ottomans in the Morean War; this second period of Venetian rule lasted until 1715, when the Grand Vizier Damad Ali Pasha invaded the Peloponnese.

During the Greek War of Independence, the castle of Methoni remained in the hands of the Ottomans, despite being repeatedly besieged by Greek revolutionaries, and served as one of the main bases for Ibrahim Pasha during his expedition in the Peloponnese in 1825–28. The town finally capitulated to the French General Nicolas Joseph Maison, leader of the Morea Expedition in October 1828; in 1833 the French turned over its control to the newly established Kingdom of Greece. 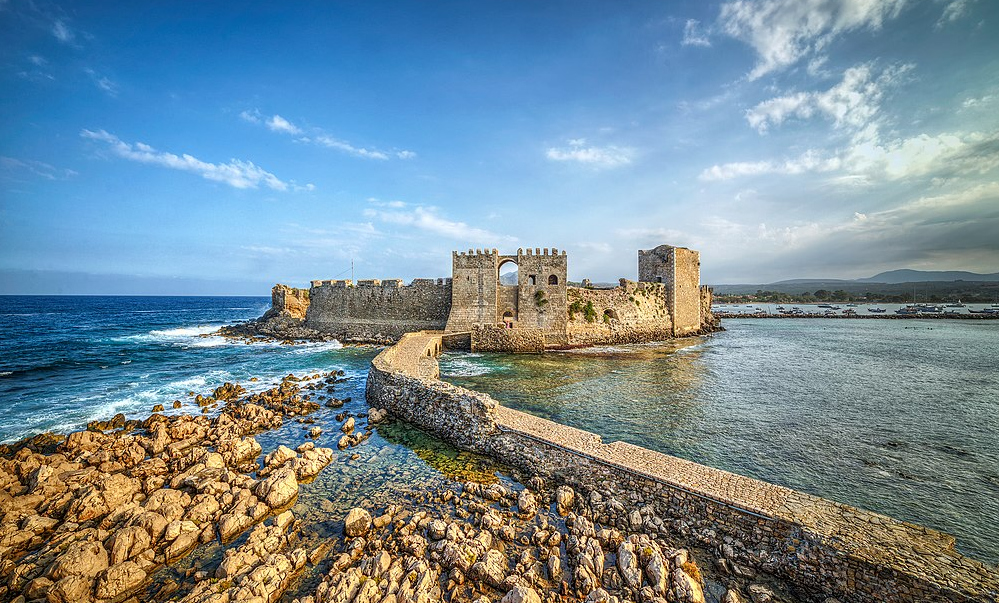 The castle occupies the entire area of the cape of Methoni on the south-western coast of the Peloponnese. An artificial stone pier connects its southern end with a small islet which has also been fortified with an octagonal tower and is protected by the sea on its three sides. The islet is believed to have been called Mothon Lithos in the ancient times, lending its name to the site. The small fort (and, by extension, the islet) is known as Bourtzi, from the Turkish burc ("tower").

On the north, there is a heavily fortified acropolis, and a deep moat separates the castle from the land; communication was achieved via a wooden bridge. The north entrance is accessed by a stone bridge that was built over the moat in 1829, by the French engineers that accompanied general Maison. 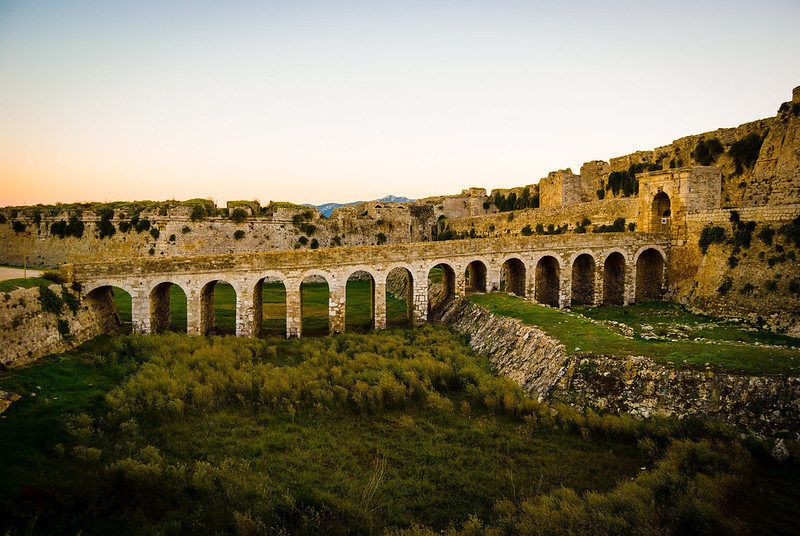 Bridge and main gate of Methoni castle (by DubeFranz via flickr)

In the interior there are ruins of the houses where the Venetian lords lived during the period of rise, the paved street that led to the sea gate, the ruins of a Turkish bath, the Byzantine church of St. Sophia, close to which a slate with Latin lettering was found (dating back to 1714), parts of Doric pillars, as well as a monolithic granite pillar with a capital on the top of Byzantine style, which is supposed to have supported either the winged Lion of Venice or the bust of Morosini. On the south part of the walls stands the impressive sea gate, which has recently been restored. This is the point where the stone pier connects the fortress to Bourtzi.

It is also worth mentioning that Methoni is connected by boat to the nearby Sapientza – a small island named after the Italian word sapienza ("wisdom"). It was on this island that the eponymous treaty was signed in 1209 between the Venetian and Villehardouin. The tiny heart-shaped island is known for its impressive coast, while the waters around it hide several ancient shipwrecks of great archaeological interest. 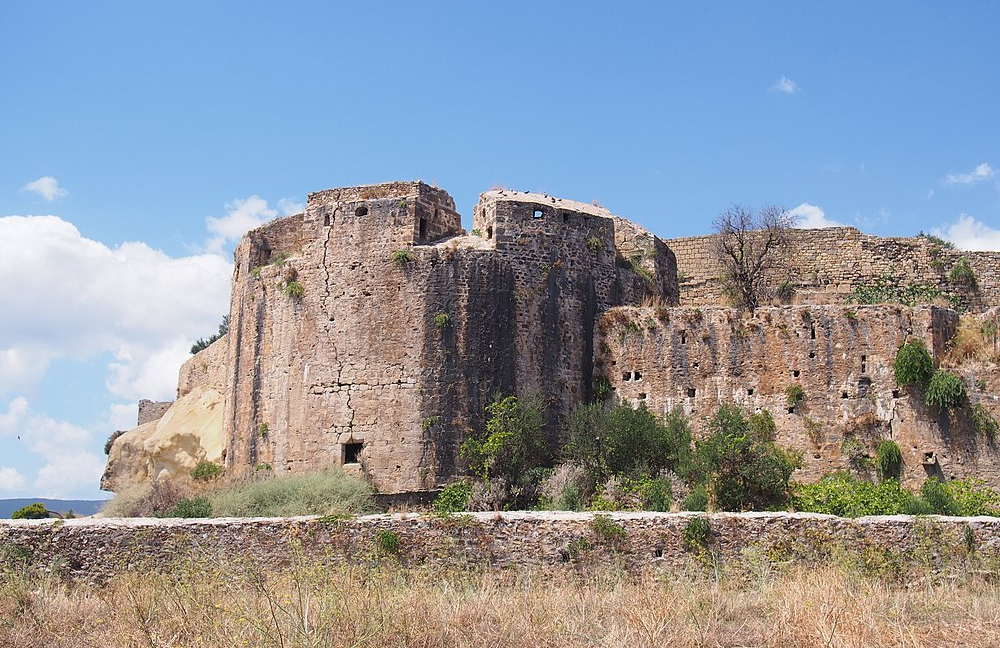 The castle of Koroni

The town of Koroni is situated on the southwest peninsula of the Peloponnese, on the opposite side of Methoni’s site. Its castle is considered one of the finest examples of the Venetian fortress architecture with massive gates, underground passages, sturdy walls and square towers. It was built by the Venetians in the 13th century and reconstructed by the Ottomans in the 16th.

As is the case with Methoni and other fortresses and citadels in the Peloponnese, the city became important and flourished after the 13th century, and it evolved into an important stop for passing ships. It was called Coron or Corone in Italian. The fortress and town were conquered by the Ottoman troops of Sultan Bayezid II in 1500. In 1532, Genoese admiral Andrea Doria captured Koroni, but the Ottomans recaptured it under admiral Hayreddin Barbarossa two years later. 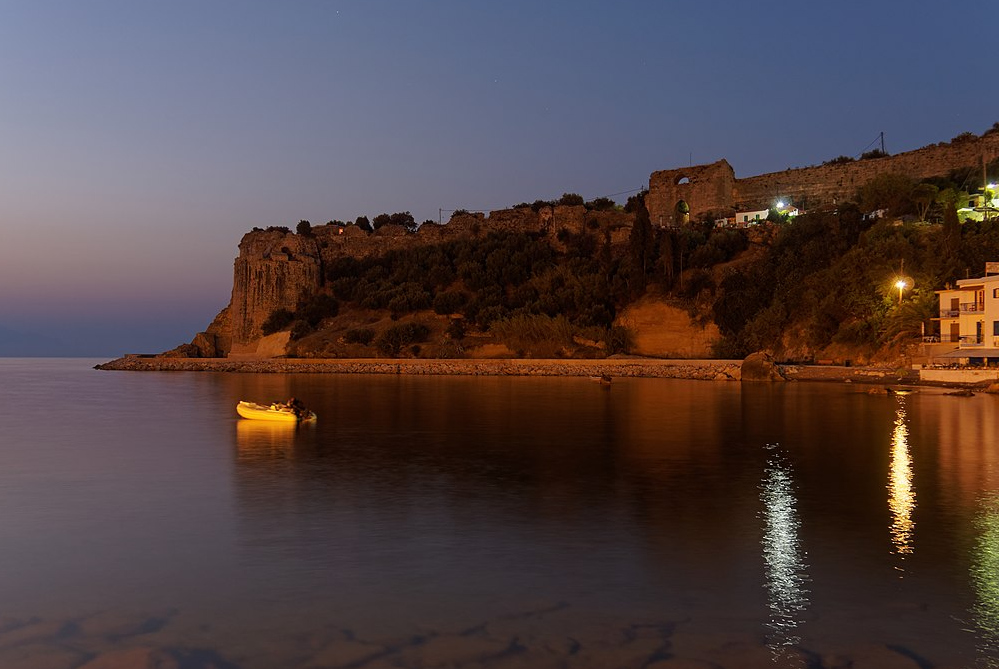 Like Methoni, Koroni was taken over by the Venetians under general Morosini in the Morean War, and remained under Venetian rule until 1715, when it was reconquered by the Ottomans, who held off repeated sieges by the Greek revolutionaries. Koroni finally surrendered in 1828 to the French General Maison, and it was eventually ceded to the Kingdom of Greece.

The initial fortifications were built during the Byzantine era; the Venetians added a large enclosure to the east, and built strong walls and a double semicircular bastion in the northeast corner, in order to protect it from the side of the sea. During the Ottoman period the fortification was reinforced on the south-eastern side with a second line of defence (later destroyed in Morosini’s siege in 1685), and with the addition of two circular bastions at its ends. 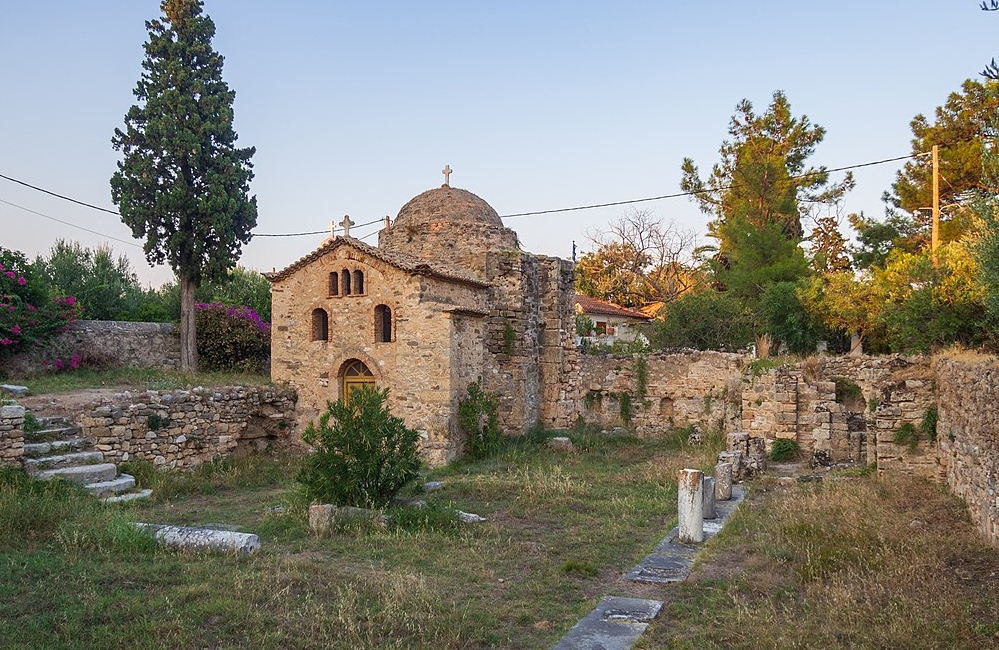 The north and the south side of the castle are overlooking the sea. On the south side, there are sharp rocks - the rocks of Resalto, which end at a beach.

Highlights of the castle include the churches of Agia Sophia and of Agios Charalambos. The latter is an old Catholic church dedicated to St Rocco, transformed into a mosque during the Ottoman occupation and then into an orthodox church. At the west of Agia Sofia stands the monastery of Timios Prodromos, built in the early 20th century.