The archaeological sites of Mycenae and Tiryns 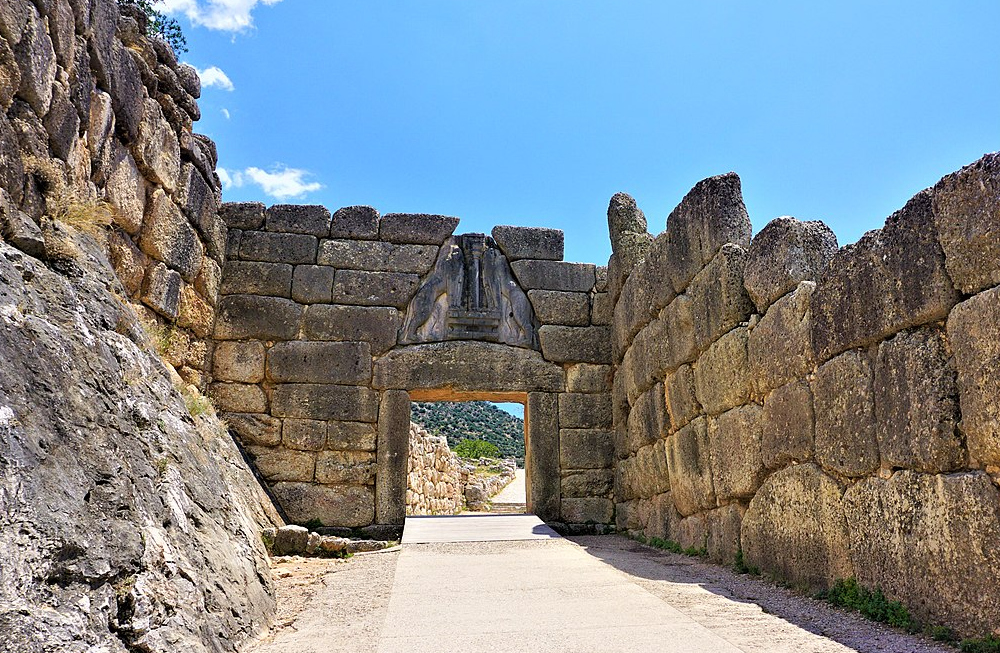 The impressive ruins of Mycenae and Tiryns, in the Argolis region of the Peloponnese, bear evidence of the role they played in the past, as the two most important cities of Mycenaean Greece. The Mycenaean civilisation (itself named after the city of Mycenae) flourished in the Late Bronze Age; it was essentially a continuation of the Middle Helladic period, with a strong influence from the Minoan civilisation, and its impact can be in most of southern and central Greece.

Mycenaean Greeks were innovative in the fields of engineering and architecture, while long-distance sea trade developed in the Mediterranean. Their syllabic script, the Linear B, offers the first written records of the Indo-European Greek language.

The archaeological sites of these two cities "indissolubly linked to the Homeric epics, the Iliad and the Odyssey, which have influenced European art and literature for more than three millennia" were jointly inscribed on UNESCO’s World Heritage List in 1999 (the same year as the Monastery of Saint John the Theologian and the Cave of the Apocalypse on the Island of Patmos). 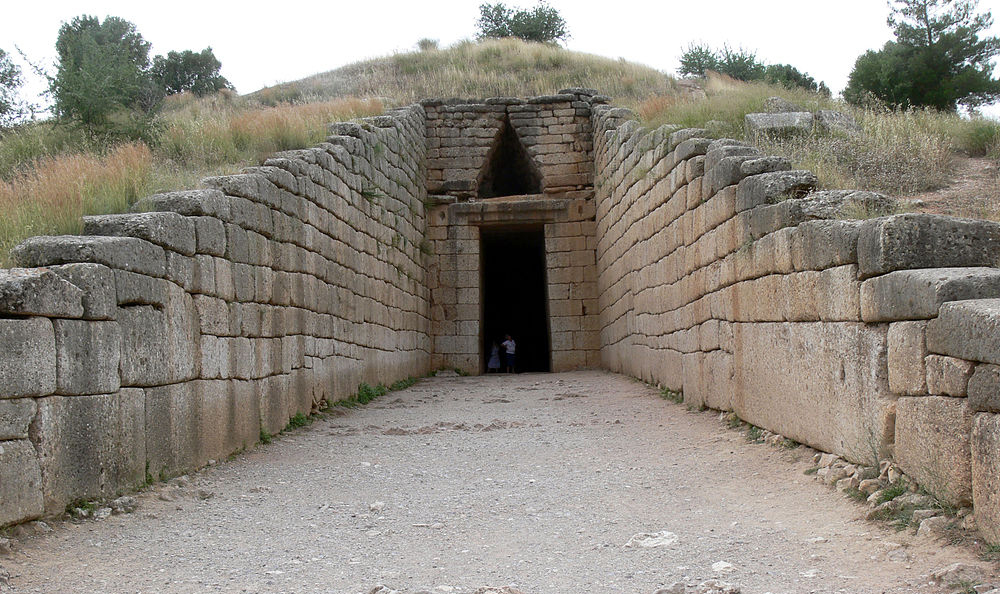 Entrance to the "Treasury of Atreus" (by Fingalo via Wikimedia Commons)

The citadel of Mycenae, famous as the kingdom of the mythical Agamemnon, owed its prominence to its geostrategic position, which secured its control over the Argolis plain. It was the richest and foremost centre in Late Bronze Age Greece, lending its name to the dominant civilisation at the time. The myths associated with its history and heroes –from the Twelve Labours of Heracles to the Trojan War and the glory and curses of the House of Atreus– have inspired poets, writers and artists for millennia.

According to mythology, the founder of Mycenae was the hero Perseus, slayer of Medusa and son of Zeus, the king of Gods, and Danae, the daughter of Acrisios, king of Argos. The Greek geographer Pausanias the Periegete attributes the city’s name either to the pommel (mykes) of Perseus ‘sword, which fell at that spot, or to the Perseia spring, which the thirstful hero discovered at the site, under the root of a mushroom (mykes). 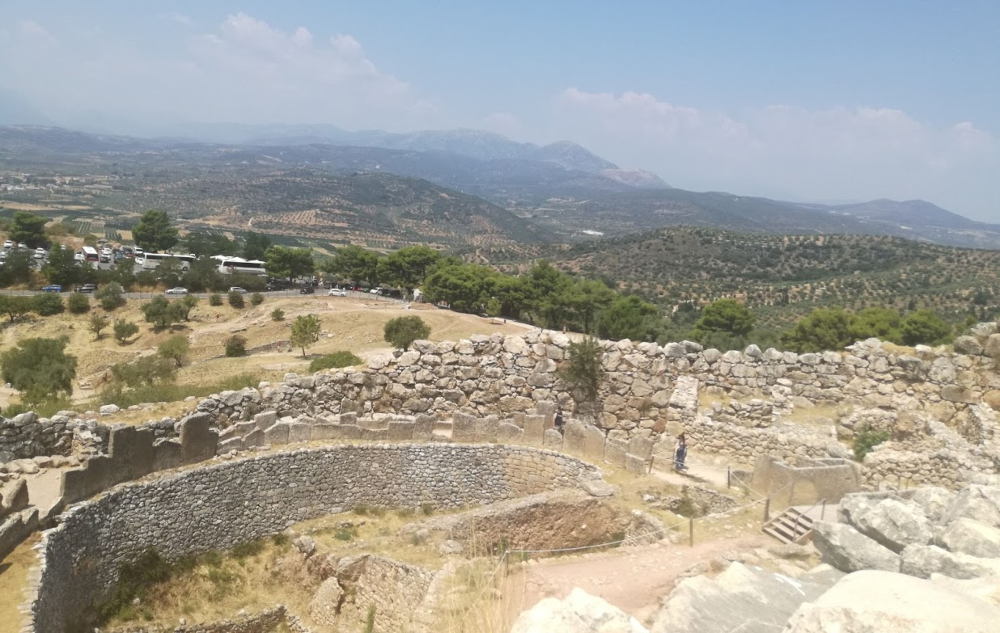 View from the Acropolis of Mycenae

Mycenaean civilisation is believed to have begun around 1750 BC, as a result of the influence from Minoan Crete to the socio-cultural landscape of the Early and Middle Bronze Age in mainland Greece. Soon, a significant increase in the population occurred; much of our knowledge about this period comes from finds at the site of Mycenae, in particular the Grave Circles A and B, which has led archaeologist to call this period the Shaft Grave era.

This civilisation reached its peak during a 3rd period known as the Palatial Bronze Age (c. 1400 BC–1200 BC), marked by the construction of powerful citadels and vast palaces, while royal shaft graves were replaced by a new burial practice: the majestic tholos tombs. It was at some point during this period that the Mycenaeans adopted the script known as Linear B, the earliest attested form of Greek, which first developed in Minoan Crete, based on the previous Linear Α.

Mycenae was organised as an autocratic monarchy, with an administration based on a complex hierarchy of officials. There was a separate class of priests and priestesses. The population was also organised according to a complex class system, and slavery was widely practised. The city of Mycenae was eventually destroyed around c. 1190 BC, possibly by invaders, marking the collapse of the Mycenaean culture. 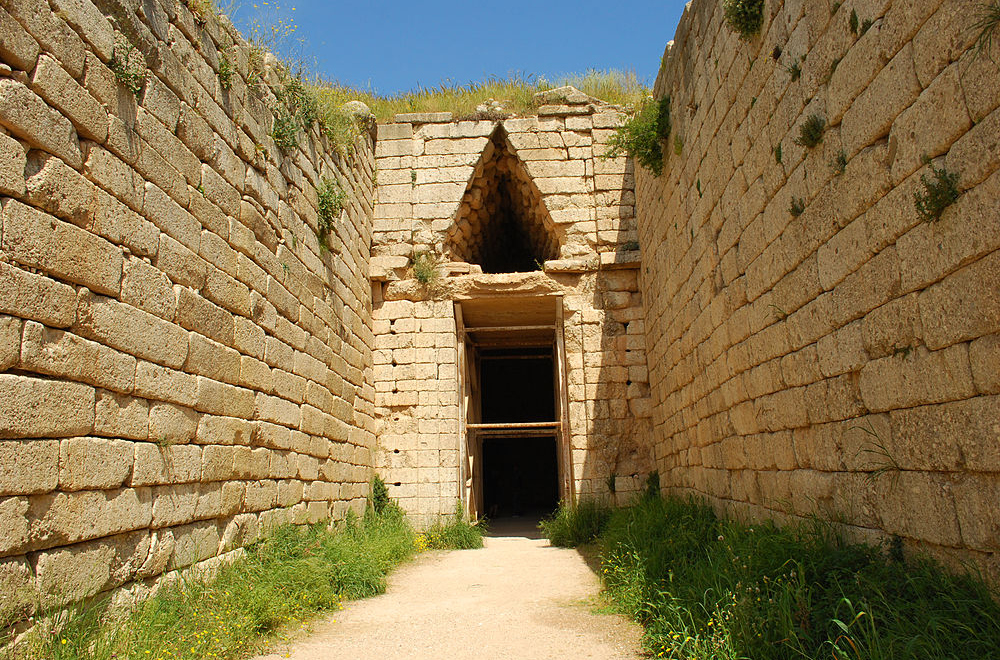 Excavations have confirmed that the site of Mycenae was occupied from the Neolithic period (c. 4000 BC). During the Middle Helladic period a necropolis developed on the southern slopes of the hill. The palace, built on top of the hill, is surrounded by massive "cyclopean" walls (named by classical Greeks, who ascribed their construction to the mythical Cyclopes) built in three phases (c. 1350, 1250 and 1225 BC). These walls include the world-famous Lion Gate, the main entrance of the citadel, which remains the only surviving monumental piece of Mycenaean sculpture.

A series of tholos tombs were built on the southern and south-western slopes of the hill during the Mycenaean period: the so-called Tomb of Aegisthus (c. 1500 BC), the Lion Tomb (c. 1350 BC), the Tomb of Clytemnestra (c. 1220 BC) and, most famously, the Treasury of Atreus (also known as the Tomb of Agamemnon), which was built at some distance from the rest of them. 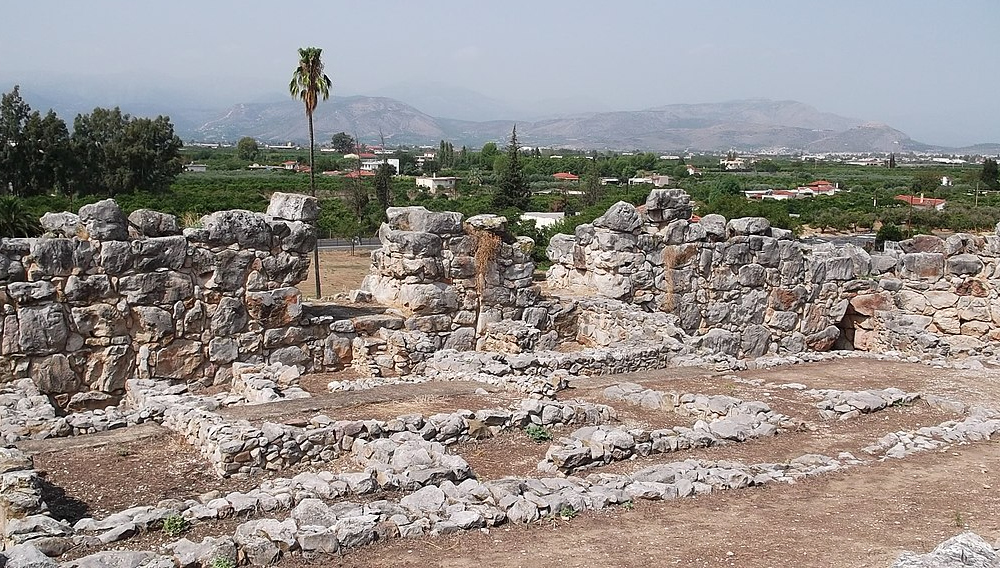 The ruins of Tiryns stand 20 km north-east of Mycenae; most of the finds there date back to the Neolithic period. The oldest architectural remains, in the upper citadel, date back to the early Bronze Age (c. 3000 BC). The city featured an impressive palace on the top of a hill; its "cyclopean" walls, completed at the end of the 13th century BC, were even more prodigious than those of Mycenae, which gave the city its Homeric epithet of "mighty walled Tiryns". Like Mycenae, Tiryns a great decline in population and power in the Late Bronze Age, although the site was not completely abandoned until the 5th century BC, when its inhabitants were expulsed.

Read also via Greek News Agenda: The unknown Mycenaean acropolis of Glas; The Griffin Warrior unlocks secrets of the Mycenaean civilisation; Philippi: a "small Rome" in Macedonia; Vravron and the cult of Artemis; The ancient city of Oeniadae; Acrocorinth: The mythical acropolis

N.M. (Based on the original article from Grèce Hebdo; Intro image: The Lion Gate at the main entrance to the Mycenae citadel [by Joyofmuseums via Wikimedia Commons])