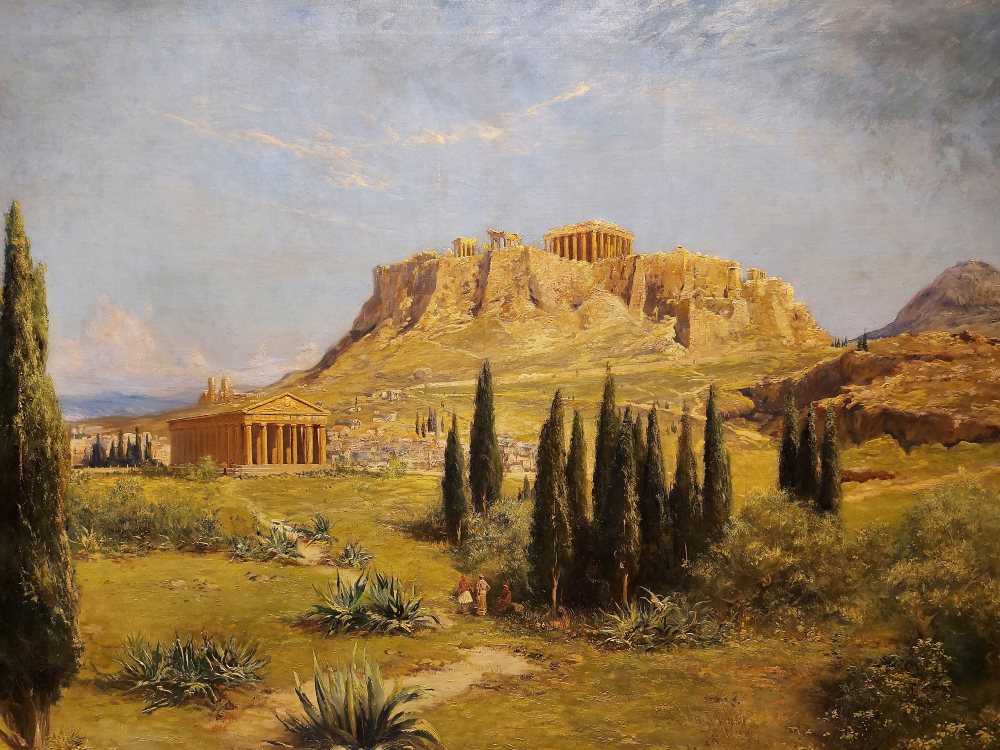 In the context of the celebrations of the Bicentenary of the Greek War of Independence, the Hellenic Parliament in collaboration with the Municipality of Ermoupolis has organised the art exhibition "From the flames of the Struggle. Athens – Ermoupolis: the rebirth of Greece" in Ermoupolis, on the islad of Syros.

The exhibition, which will last until October 20, is hosted at the Cyclades Art Gallery, situated at the far end of the charming Ermoupolis promenade. It features 19th-century oil paintings, watercolours and engravings from the Hellenic Parliament’s Collection of Works of Art, which have never before been presented outside of the Parliament’s art venue; it also features many works from the Michalis and Dimitra Varkarakis philhellenic Collection. The exhibition is curated by Dr Thodoris Koutsogiannis, curator of the Art Collection of the Hellenic Parliament. 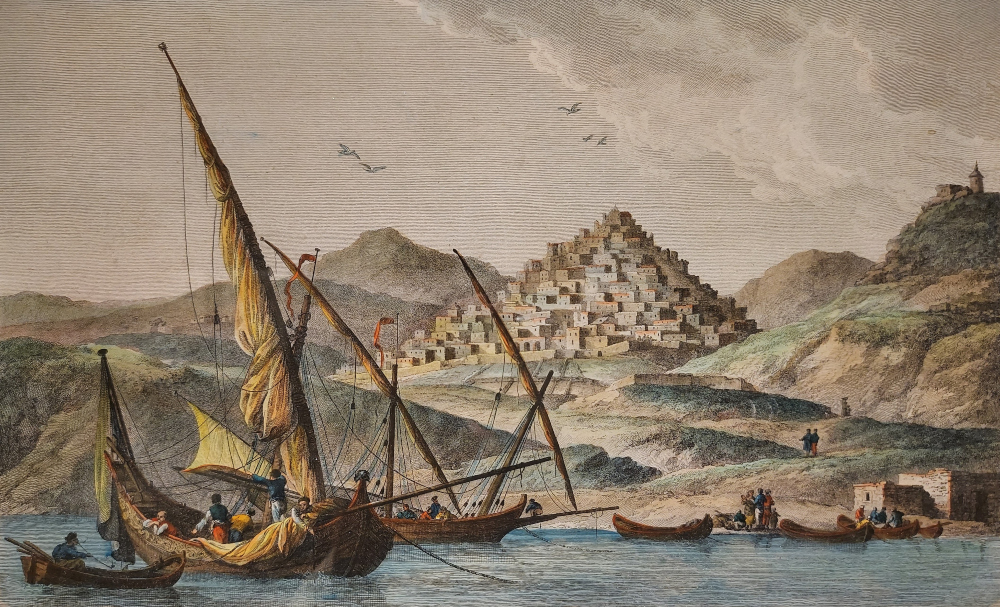 View of the city and the island of Syra (Syros) by Marie-Gabriel-Florent-Auguste comte de Choiseul-Gouffier (illustration from the edition Voyage pittoresque de la Grèce, Paris 1782, from the Hellenic Parliament Art Collection)

The aim of the exhibition is to highlight the revival of the classical ideal of freedom in Greece, and especially its expression in visual arts, by both Greek and international artists, especially philhellenes. It centres on Athens and Ermoupolis as two of the most important Greek cities of the 19th century, that also share a great Neoclassical tradition in their historic buildings. The Neoclassical movement in art and architecture distinctly exemplifies the Hellenic ideal which had fueled the dreams for the rebirth if Greece and the revival of Greek classical culture, and the curator’s goal is to illustrate this struggle of the Greek nation to reconnect to its past and restore its former glory.

The exhibition is arranged in six thematic units. In the introductory section, the narrative begins with The vision of Regeneration –the widespread desire for a Greek resurgence in the years of Ottoman rule, and the first instances of the revolutionary struggle (such as the Orlov Revolt and the pamphlets of Rigas Feraios)– and The insular Hellenism in the pre-revolutionary era, with works showing the islands and ports of the Aegean as they were depicted by artists, mainly foreign travelers, of the time. 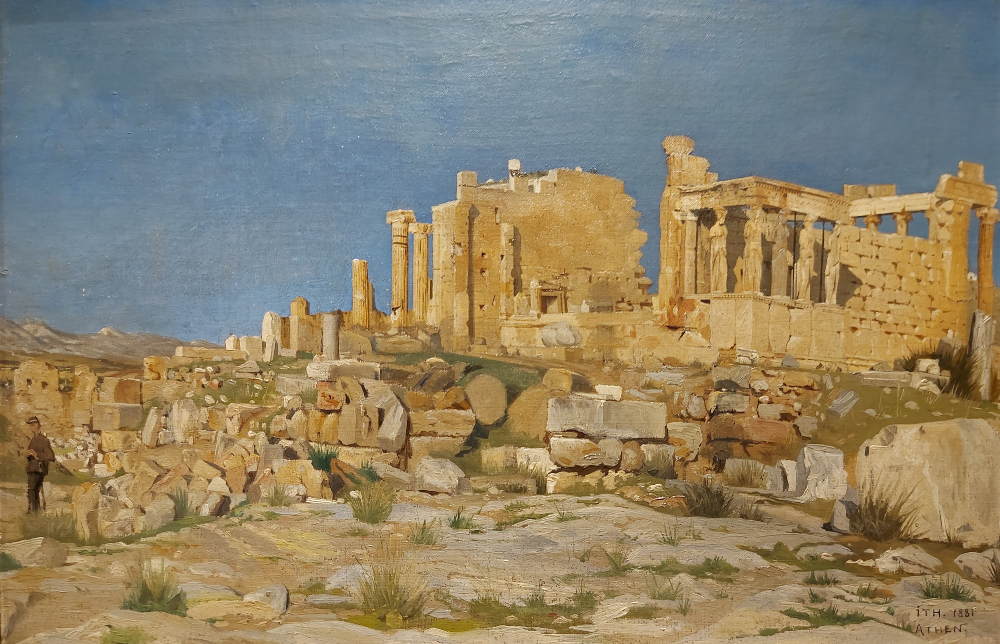 View of the Erechtheion, 1881 by Josef Theodor Hansen (from the Hellenic Parliament Art Collection)

In the third unit, The Athens of the classical heritage, the exhibition focuses on the multitude of representations of Athens, and especially of the city’s emblematic classical monuments, by foreign but also Greek artists. These famous monuments –such as the ancient Agora, the Temple of Olympian Zeus and, above all, Acropolis and the Parthenon– not only raised Athens to a symbolic level, which was the reason for its designation as the capital of the newly-founded state, but also served as the inspiration for the Neoclassical buildings that would be built in the city and in the rest of Greece.

This shaping of the city in the Neoclassical style had been, in a way, also foreshadowed in art, as painters would often envision a reconstruction of the city that would restore it to its ancient splendour; the fourth unit, The neoclassical Athens, features such imaginary reconstructions of Athens, which not only demonstrate how the artists of the time visualised the young capital, but also served as a model for the construction of monumental buildings such as the House of the Hellenic Parliament, then built as the Royal Palace.

The unit The neoclassical Hermoupolis gives viewers a preview of the iconic architectural and sculpted monuments of the capital of Syros through high-resolution photographs – visitors can take a general idea of the island’s neoclassical heritage, and of the sites they could easily visit – as most of these are found in a close proximity, in the very heart of Ermoupolis. Among the most iconic are the Town Hall, designed by famous Bavarian architect Ernst Ziller in 1876-1891, and the Apollon Municipal Theatre, built in 1862-1864 to the designs of the Italian architect Pietro Sampò. 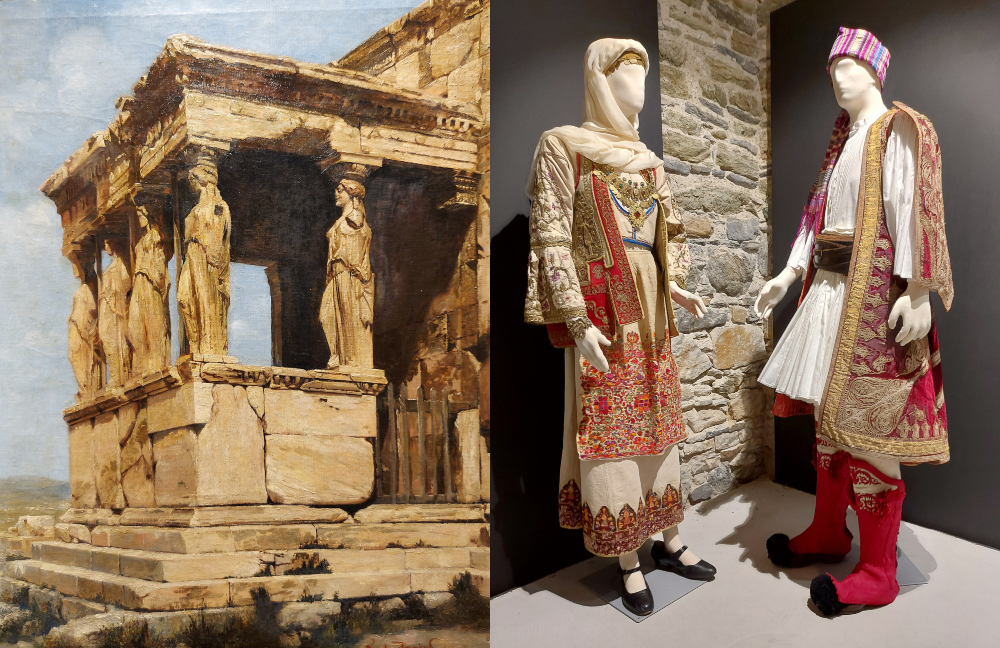 Left: The Caryatids on the Erechtheion, N. I. Lampiris (from the Hellenic Parliament Art Collection); Right: two traditional Greek costumes (from the collection of Lykeion ton Hellenidon)

The exhibition closes with the New Hellas, which features portrayals of the newly liberated Greeks’ everyday life in the 19th century, as they have been captured by artists of the time. It also features six traditional Greek costumes from the collection of the Syros Chapter of the historic cultural organisation Lykeion ton Hellenidon (Lyceum Club of Greek Women).

The fully illustrated catalogue has been edited by the exhibition’s curator, Dr Thodoris Koutsogiannis, and contains photos not only of every work of art presented but also of the Neoclassical monuments of Ermoupolis.

Read also via Greek News Agenda: Architect Ernst Ziller and his rich legacy in Greece; POEM OF THE MONTH: "Riga's Last Song" by Elizabeth Barrett Browning; The Acropolis and the Parthenon in Modern Greek art as symbols of national and world heritage

N.M. (Intro photo: View of the so-called Theseion with the Acropolis in the background by Max Friedrich Rabes, from the Hellenic Parliament Art Collection)