A new era for the Restitution of the Parthenon Marbles

Could cutting-edge science provide the solution to Greece’s decades-long campaign concerning the return of the Parthenon Marbles and the reunification of one of the world's greatest cultural monuments? The Institute of Digital Archaeology believes it can recreate an exact replica of the Parthenon sculptures with 3D printing technology, using scans taken by 3D cameras.

Ioannis Raptakis, the Greek Ambassador to the UK, has welcomed the announcement, saying that the British government now has a unique opportunity to end an injustice that weighs on all Greeks. More specifically, as Ambassador Raptakis noted: “Greece is willing in return to give to the British Museum cultural treasures on loan which have never left the country or to explore the idea to let the British Museum make a high-quality marble copy not just of the sculptures it has, but of the Parthenon sculptures that are in the Acropolis Museum in Athens.” 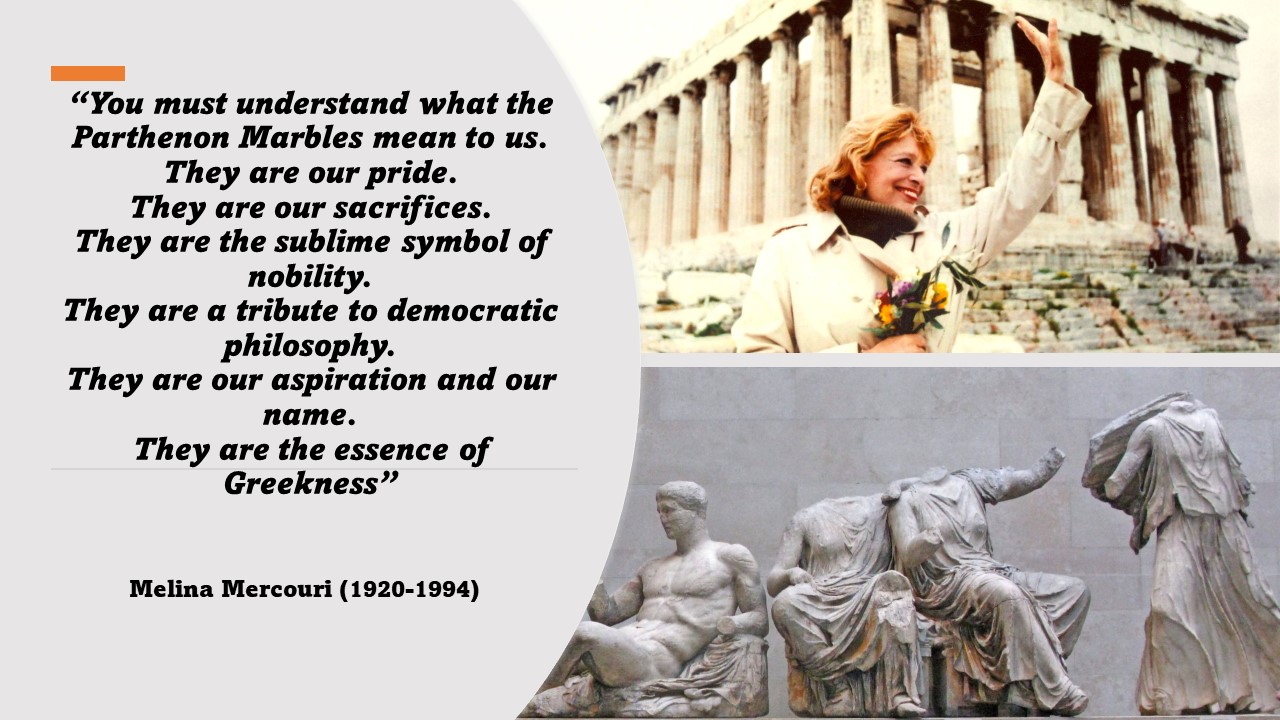 In a recent leading article (14/2), the British newspaper “The Times” encouraged the British Museum to "embrace this technological opportunity", after recently having shifted its editorial position concerning this issue: “For more than 50 years, artists and politicians have argued that artifacts so fundamental to a nation’s cultural identity should return to Greece. The museum and the British government, supported by The Times, have resisted the pressure; but times and circumstances change. The sculptures belong in Athens. They should now return.”

More specifically, at the World Leaders Forum at Columbia University in December 2020 – just before Greece’s bicentennial – Prime Minister Kyriakos Mitsotakis reaffirmed Greece’s determination to recover the sculptures that have been in the possession of the British Museum since 1816 after a deal struck by Lord Elgin, who bought them from the Ottoman authorities before Greek independence. The Greek PM stated that Greece had a very credible legal and moral case for the return and display of the marbles in the Acropolis Museum. In February 2021, Greece’s Foreign Minister, Nikos Dendias, also raised the issue with his then UK counterpart, Dominic Raab, referring to the “priceless monuments of the country’s cultural heritage, which are housed in the British Museum” and calling for a framework to be formulated for their return to Greece.

The famous collection of these contentious sculptures includes some of the sculptures of the frontispieces and the metopes, representing battles between the Lapiths and the Centaurs as well as some of the frieze of the Parthenon, which decorated the upper part of the cella’s walls of the temple lengthwise. As a result, they represent more than half of the remaining sculpture decoration of the Parthenon that has survived through time.

The case of the Parthenon Sculptures has been on the agenda of the UNESCO Intergovernmental Committee for Promoting the Return of Cultural Property to its Countries of Origin (ICPRCP) for almost forty years. It was Melina Mercouri, the then Greek Minister for Culture, who first raised the issue of their return at the UNESCO World Conference on Cultural Policy held in Mexico in August 1982. Despite the fact that the Forum ruled in favor of the cause, stating that the restitution of works illicitly removed to their countries of origin is a basic principle of cultural relations between peoples, Mercouri’s British counterpart replied that the UK Government “could not interfere in the affairs of a private establishment like the British Museum”.

Adventures of the Parthenon marbles in modern times (© Acropolis Museum)

However, a resolution issued in September 2021, within the context of UNESCO ICPRCP’s 22nd session, is game-changing. The resolution acknowledges the “legitimate and rightful demand” of Greece for the return of the Parthenon Sculptures that were plundered by Lord Elgin more than two hundred years ago. Moreover, it recognizes the issue as intergovernmental (and not as an issue between the two Museums) and calls for the UK Government to enter into a bona fide dialogue with the Greeks to find a resolution to this long-standing cultural property dispute.

More specifically, on the second day of the ICPCRP’s 22nd session, Greece made its presentation via video conference from the Acropolis Museum in Athens.  Its delegation comprised the new Director-General of the Acropolis Museum, Nikolaos Stampolidis, the Secretary-General of Culture, George Didaskalou, the Head of the Directorate of Documentation and Protection of Cultural Goods, Vasiliki Papageorgiou, and the Greek Ministry of Foreign Affairs’ legal advisor, Dr Artemis Papathanassiou. The Greek presentation was direct and to the point: the dismembered Parthenon Sculptures, divided between London and Athens, must be reunited.

Among others, Professor Stampolidis stressed the uniqueness of the Parthenon and explained that the Parthenon Sculptures differ from other museum objects in that they emanate from a surviving monument and their reunification to the parent structure would restore the integrity of a world heritage monument and would not create a precedent for other acts of return.  On the part of the Greek Ministry of Foreign Affairs, Dr. Papathanassiou noted that the Greek request had been on the Committee’s agenda as a pending case since 1984. Yet the British government continues to claim that it is a matter for the British Museum Trustees alone even though, as far as international law is concerned, the obligation to return state cultural artifacts lies squarely on the government and not on a museum.

Greece’s Prime Minister Kyriakos Mitsotakis characterized the ICPCRP resolution as a “pivotal step” in the government’s restitution efforts, but it was the Greek PM’s visit to the UK in November 2021 that brought the Parthenon Marbles into the British public gaze and raised the international profile of the campaign and the Greeks’ steely determination.

“Our request is not a flare. We will insist, methodically, to build the necessary foundations within British public opinion for the need to reunite the Parthenon Marbles with the sculptures of the Acropolis Museum. It is an important issue, one that relates to our bilateral relations […] This is not a legal issue per se, it is, above all, both a matter of principle, as well as a political issue” said Greece’s Prime Minister Kyriakos Mitsotakis, speaking to Greek journalists in London after his meeting with PM Johnson.

Despite Boris Johnson’s reluctance to engage in intergovernmental negotiations over the issue, Mitsotakis appeared encouraged by his visit to the UK; interestingly, a “clear and growing majority” of UK residents seems to be on his side. More specifically, according to a poll conducted by Britain’s YouGov, 59 percent of participants said that the Parthenon Marbles belong to Greece and should be returned to their rightful owners, a finding that was welcomed by the Greek PM Mitsotakis who commented on the strong relationship between Greece and the UK: “Let us strengthen it further. It is time to do the right thing and reunite the Parthenon Sculptures in Athens. A move backed by the British people”.

In December 2021, at the instigation of Greece and with the support of more than 100 member States, the General Assembly of the United Nations passed a landmark resolution A/76/L.17 for the return or restitution of cultural property to their countries of origin. As the Greek Ambassador to the UN explained, cultural property is not simply a testimony to a nation’s past but the reflection of the country’s history and heritage, as she called for the creation of a proper framework for restitution to best inspire the collective conscience of humanity.

In the meantime, items acquired under dubious circumstances are being returned to their country of origin. Most recent example is the return of 55 ancient artifacts to Greece, as announced by Manhattan District Attorney Alvin Bragg at a repatriation ceremony held in New York last week, which was attended by Greece’s Minister of Culture Lina Mendoni. The handover followed the conclusion in December 2021 of a multinational investigation into Michael Steinhardt, owner of one of the world’s largest private ancient art collections (47 of the pieces that will be returned to Greece came from the Steinhardt collection and eight more were drawn from another investigation that is still ongoing). 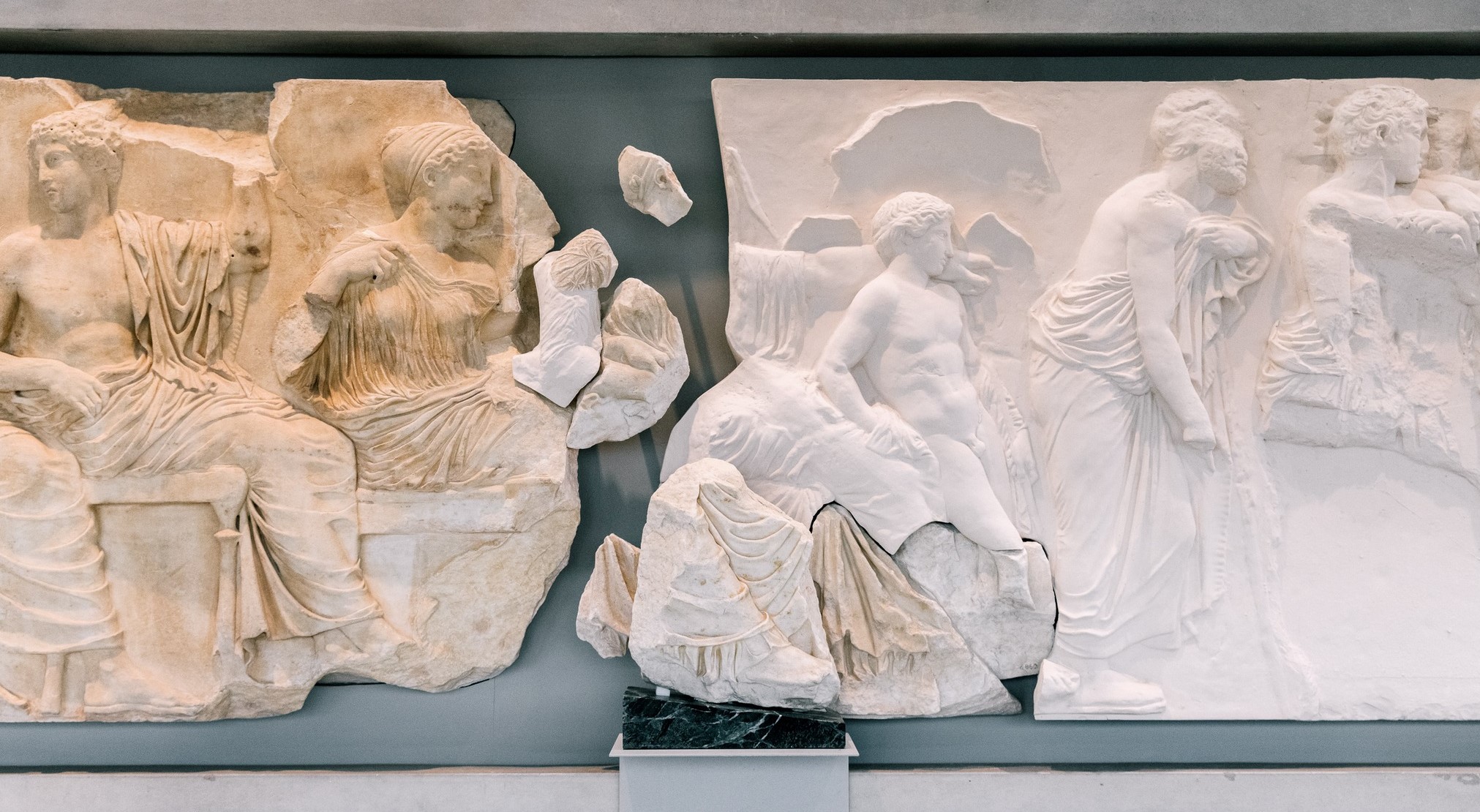 Τhe new year kicked off just as enthusiastically as it was marked by the long-awaited homecoming of the renowned “Fagan fragment” from the Antonino Salinas Museum in Palermo to the Acropolis Museum. The significance of this return does not lie in the long-term nature of the deposit of the fragment to the Parthenon frieze, but in the prospect of remaining at the monument to which it belongs permanently (sine die), following the initiative launched by the Independent Regional Authority of Sicily towards the Italian Ministry of Culture.

As the artwork was unveiled at the Acropolis Museum, PM Mitsotakis said its restitution opened the way for similar accords to be reached, not least with the UK, while Sicily’s councilor for culture, Alberto Samonà acknowledged the strong symbolic value of sending back to its country of origin a small, but significant, fragment belonging to the Parthenon as a gesture of friendship between Greece and Sicily, two areas of the Mediterranean that share a common story.

Greece is asking for the collaboration of Great Britain in the name of the monument itself and in the name of the World's Cultural Heritage. This can be effected through bilateral cultural and educational cooperation. More specifically, the proposal envisages the exhibition of the reunified Parthenon Sculptures in a large hall of the New Acropolis Museum Greece and Great Britain can share in the restoration and the revival of the Parthenon. Displaying the Parthenon Sculptures in unity will enable us to enhance our reading of this unique monument - the symbol of Ancient Greece, democracy, and Western civilization- develop scholarship and reveal to future generations the achievements of mankind.

Moreover, now that public opinion in Britain has shifted in clear favor of the return of the sculptures to their rightful home in Athens, vesting the trustees with the right to voluntarily return the sculptures would not only affirm the British nation’s respect for the immense legacy of ancient Greece and promote the indivisibility of Classical Greek art but also enhance the reputation of the British Museum in the eyes of the world and strengthen the UK’s global role. As such, the repatriation of the sculptures would create a win-win situation. 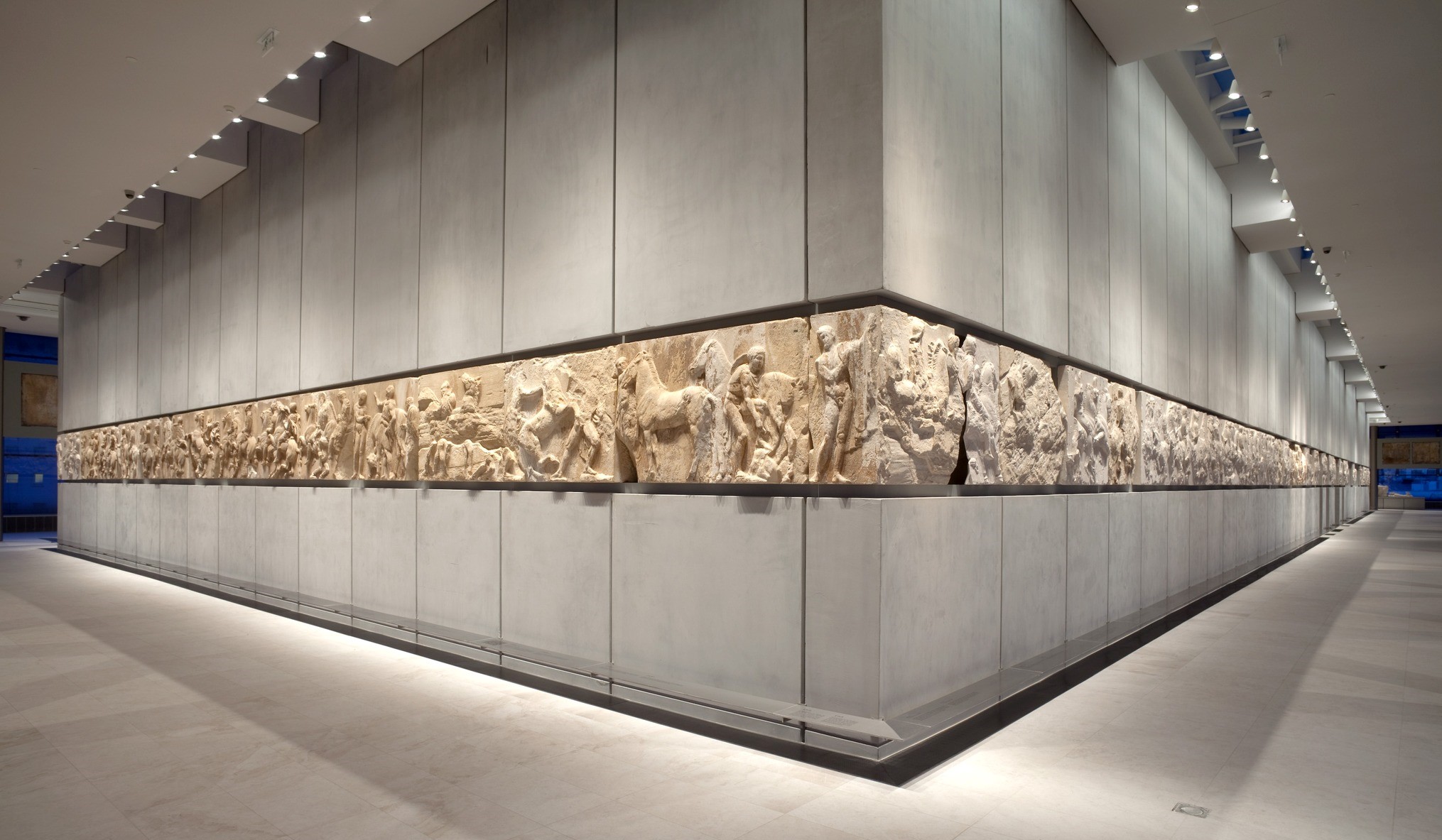 More info & photos: visit the websites of the Greek Ministry of Culture, the UNESCO ICPRCP, the Acropolis Museum, the Melina Mercouri Foundation, the International Association for the Reunification of the Parthenon Sculptures, and Bring them Back campaign.

Check out the new web application Parthenon Frieze, presenting a modern way of exploring the complete synthesis, as well as the history, the design, and construction of the Parthenon frieze. The application was created by the Acropolis Museum, in collaboration with the Acropolis Restoration Service and the National Center for Documentation & Electronic Content.

Bruce Clark: "The Acropolis never ceased to be a place of spiritual importance"
H.E. Krister Kumlin: "The return of the Parthenon Marbles to Athens is a question of moral principle"
The Acropolis and the Parthenon in Modern Greek art as symbols of national and world heritage