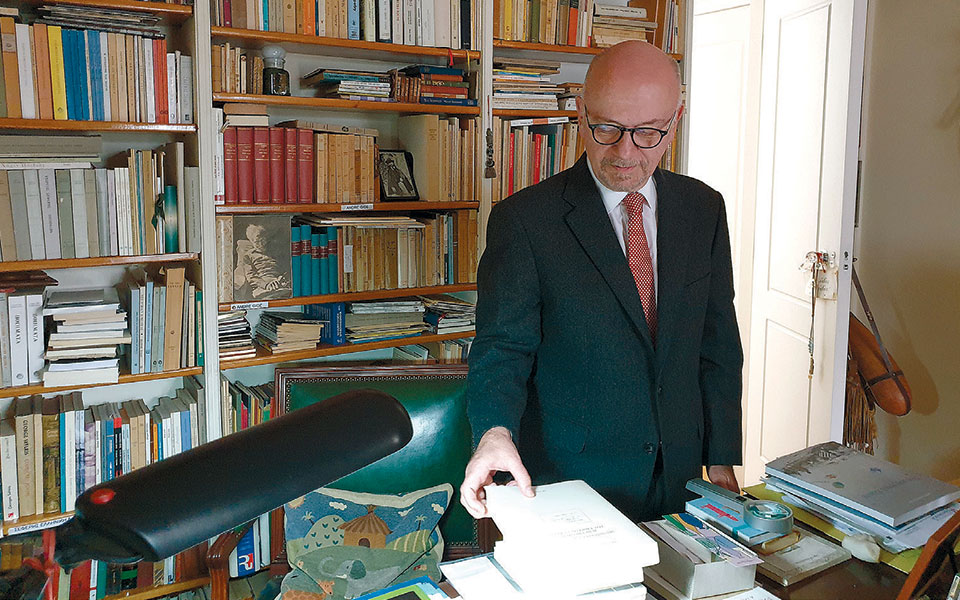 Vassilis Papadopoulos, a career diplomat at the Greek Ministry of Foreign Affairs, as well as a scholar specialized in Literature and the history of Greek language, has reviewed Roderick Beaton’s new book, The Greeks: A Global History, for literary review The Book’s Journal. Below are some excerpts from his review, translated* into English.

The new, important and expansive book by Roderick Beaton, the acclaimed Emeritus Koraes Professor of Modern Greek & Byzantine History at King’s College London, is entitled The Greeks: A Global History, and is published by Faber publishing house.

Following his two wonderful biographies on Lord Byron and George Seferis, as well as his book ‘Greece: Biography of a Modern Nation’, Beaton undertakes with his monumental new work an enormous and difficult task: to narrate not the history of Greece, but the history of the Greeks, from the dawn of civilization to the present day. Over the millennia, the Greeks underwent various transformations, either as subjects of the kings of Mycenae or Pylos, citizens of ancient Athens or Syracuse, inhabitants of the Hellenistic kingdoms, subjects of the Roman emperor, Roman citizens from 212 AD, subjects of the Byzantine Emperor and then of the Doge of Venice or the Sultan, citizens of the Hellenic Republic or the Republic of Cyprus, members of the Greek communities of the USA, Alexandria or Mariupol. What connects them all is what Beaton describes as "the invisible to archaeologists, but destined to evolve into the most important exportable creation of the Greeks": the Greek language.

I believe that Beaton's engagement with Giorgos Seferis is what led him to grasp the importance of the Greek language as a connecting link, in the way that the great Greek poet brought it to light in his essays and speeches, and especially before the whole world, in his acceptance speech when he received the Nobel Prize for Literature in 1963: "I belong to a small country. [....] It is a small country, but its tradition is immense and has been handed down through the centuries without interruption. The Greek language has never ceased to be spoken. It has undergone the changes that all living things experience, but there has never been a gap". 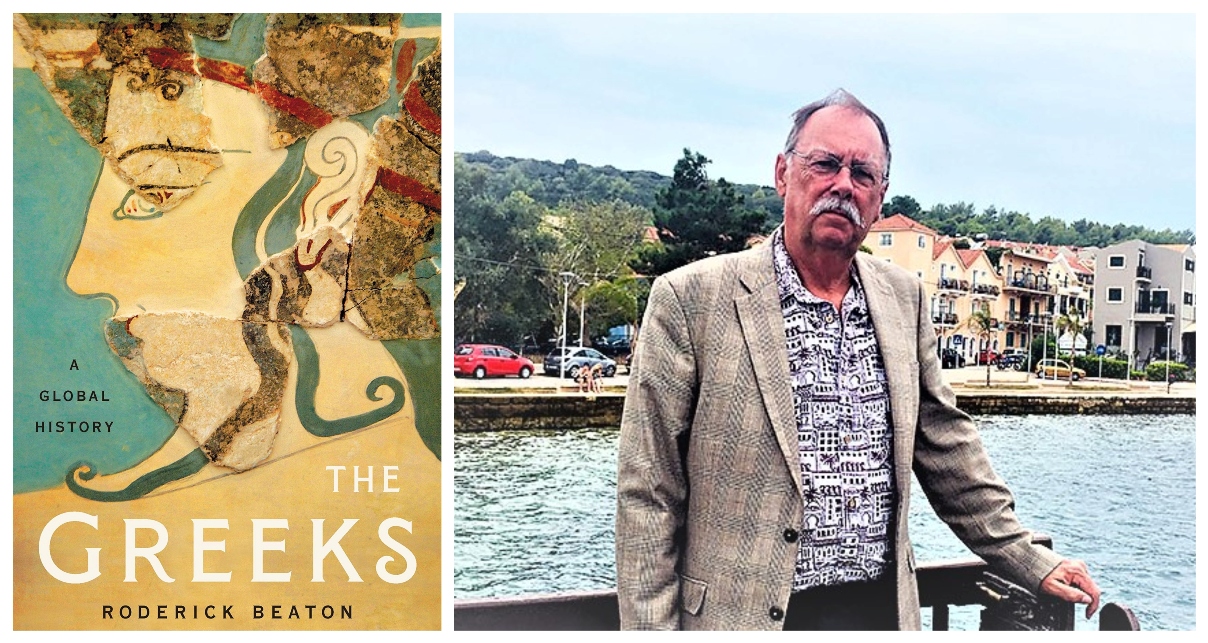 With his vivid, intelligible and unpretentious style, his straightforward and lucid thinking, Beaton starts from the beginnings of the Minoan and Mycenaean civilizations, where the first speakers of Greek and the birth of Greek culture coincide. He leaves no doubt as to the significance and global influence of Greek culture, which largely stems from literature. He emphasizes that wherever the Mycenaean merchants traveled with their small ships, they brought their language with them, even to the city of Troy. The Mycenaean era created collective memories that survived because they were later recorded. As a result, these myths and legends that were captured in writing are still known to us today – through the tragedies of Aeschylus, Sophocles and Euripides and the epic poems of Homer – and have never ceased to be read, copied, perfected, and commented upon.

In equally clear words, combining historical, geographical, archaeological and philological elements, Beaton explains how we came to the invention of the alphabet, to the transition from oral to written tradition, starting with the Homeric epics, which have been a source of inspiration for generations of writers, composers, directors, painters, sculptors, philosophers for thousands of years. What we now call literature, Beaton notes, was born with the Iliad and the Odyssey, adding the following critical observation: "And so in the end, the true heroes of this story turn out to be not the warriors, with their deeds of valour or ingenuity, but the poet and the Greek language in which he tells his tale. Anyone can win a place on the roll of honour if he lives up to a set of values that the poet assumes are universal. In many ways, the most sympathetically presented of all the heroes in the Iliad, on either side, is the enemy champion, Hector. Homer’s world is a Greek world only because Homer’s words are Greek." With these two phrases, Beaton rebuts the superficial militant approach on racism in the classic epics. 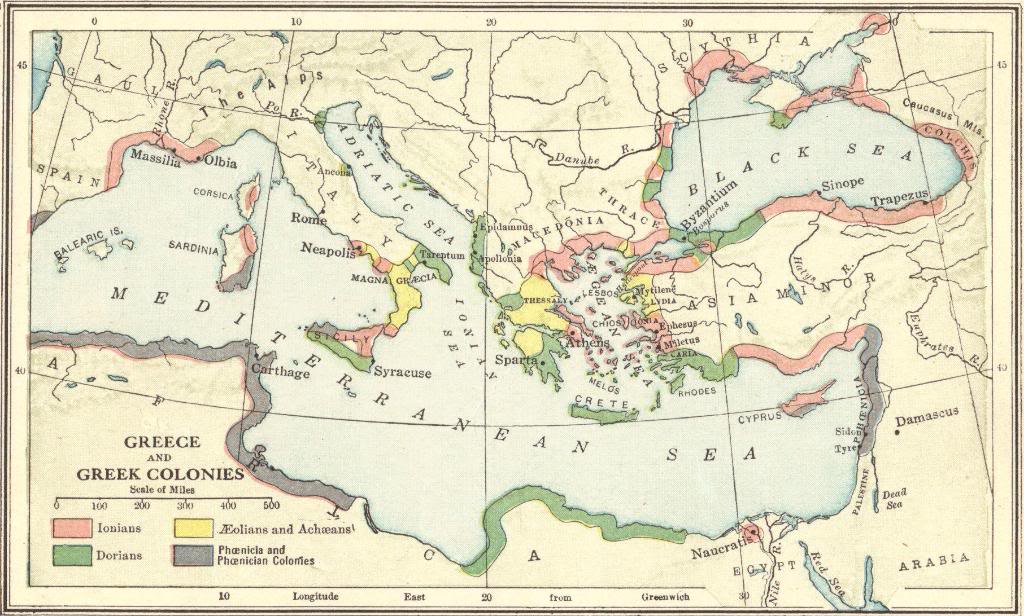 Outlining the map of Hellenism that remains the same to this day, Beaton explains the profound relationship of the Greeks with the sea, drawing attention to the fact that all Greek colonies in antiquity were around the Mediterranean and the Black Sea, not deep in the hinterland of the then known world. He clearly and convincingly analyzes the reasons for the birth of democracy in the Greek world, explaining why, in Greek cities, for the first time in history, the rule of law stood above officials and governors, kings and generals, and even tyrants. He describes how philosophy appeared in the Greek cities of Ionia, where Heraclitus the Ephesian realized that the universe can also be explained according to laws. "Modern science begins with Heraclitus," Beaton notes characteristically.

He refers to the common consciousness of Greekness through participation in the Olympic Games and common religious ceremonies in Delos or Delphi. His pertinent analysis points out that the relationship of the Greeks with God has always been of a transactional nature, from the time of the Delphic votive offerings to General Makrygiannis’ agreement with Saint John to provide him with arms. He correctly refers to the first time we encounter a written record of the common Greek identity, that is, in Aeschylus’ tragedy “The Persians”, with the war chant of the battle of Salamis "Sons of Hellenes, onward, set free your fatherland, your children, wives, the homes of your ancestral Gods and your forefathers’ graves."

The influence of classical antiquity in the then known world was wide and, as Professor Roderick Beaton observes "the name of Greeks [came] to be understood, not in terms of kingship any more, but of a way of thinking, and people to be called Greeks if they share our educational system, rather than a common ancestry."

According to Papadopoulos, a central motif of Beaton’s book is that the history of the Greeks far exceeds that of the Greek state. Papadopoulos concludes his review noting that what he finds most impressive is how Beaton understood that the Greek language, a language that has been spoken uninterruptedly for three thousand years, and in which masterpieces have been written, is the defining element of Greek identity.