'Boulouki' travelling workshop :"Local materials and traditional techniques are the epitome of sustainability" 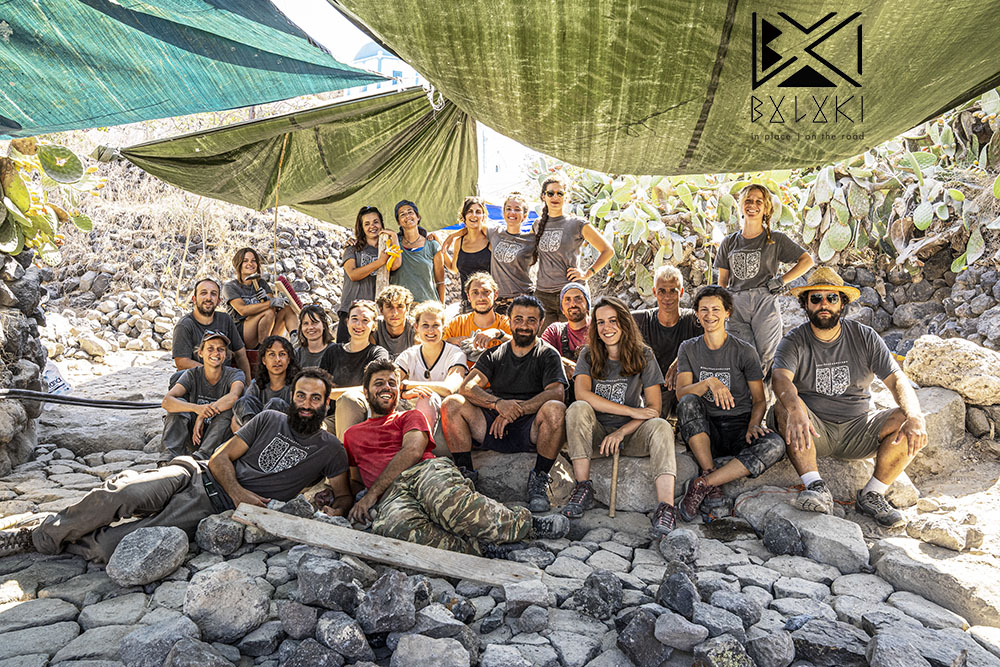 Boulouki is an interdisciplinary research collaborative, whose work is focused on the study and preservation of traditional building techniques and materials. In Greek, “Boulouki” means “gaggle”, travelling group, a name evoking the tradition of travelling companies of stone masons and craftsmen. Boulouki’s aim is to trace the living carriers of such traditional knowledge; to document, study and further disseminate this knowledge through workshops and actual building projects, always in collaboration with local communities.

"Local materials and traditional techniques are the epitome of sustainability"

As members of Boulouki told us*: “On one hand, we are trying to record and preserve tangible heritage; the knowledge on traditional building techniques. Beyond that, through hands-on workshops and seminars, we aim to train craftspeople, architects, and engineers, but also archaeologists and other professionals from the field of cultural heritage. Furthermore, we want to start a dialogue with these professionals, as well as with other stakeholders like the Technical Chamber of Greece, relevant ministries, local municipalities, and private companies involved in construction.”

Sustainability is a key concept to Boulouki’s approach: “Over the past decades, the construction sector has generally moved away from traditional techniques and the use of local materials. Yet, we believe that we can learn a lot from them for today’s world and the future. So, we suggest that we look into them again through the lens of sustainable development –which, by the way, is a goal all societies are moving towards. Local materials and traditional techniques are the epitome of sustainability.” 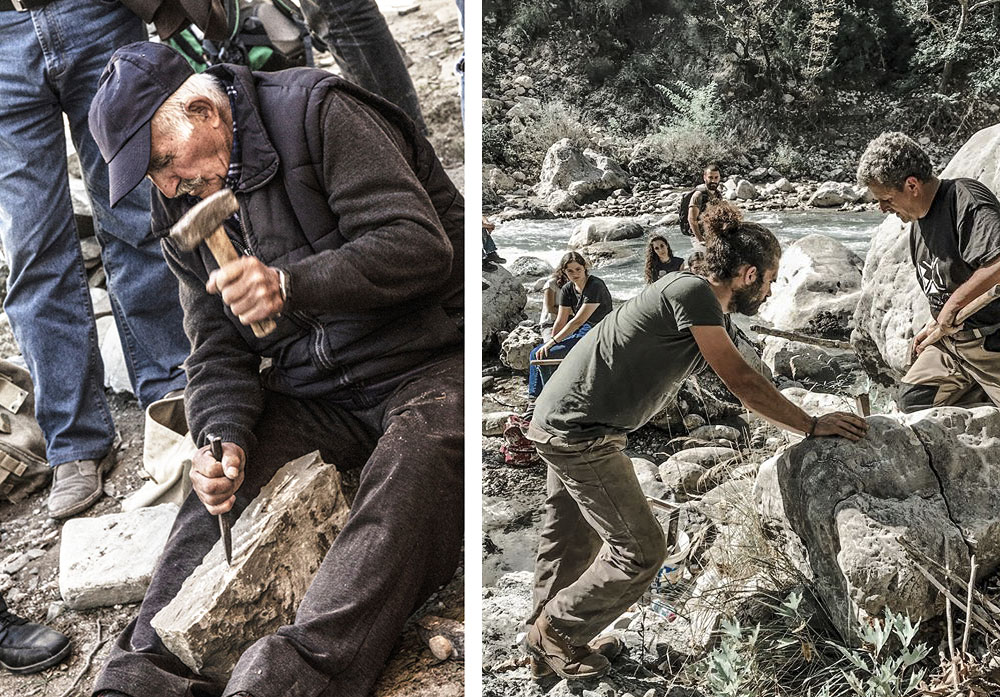 So far, Boulouki has mostly worked in Epirus, a mountainous area of Greece, once celebrated for its stone masons, and also a crossroads for various Balkan cultures. Over time, the team has expanded its activities to other areas of Greece as well, one of them being Therasia, a small island located very close to Santorini. This is where Boulouki developed their largest project so far, “Under the Landscape”. Therasia, along with its "famous" neighbor, Santorini, are places where the existence of the volcano determined the natural and man-made environment; its inhabitants adapted to the special environmental conditions and used volcanic rocks and theran earth to develop building practices -which in turn altered the landscape.

What is so special about “theran earth” and its use by the locals?

“The caves in Therasia and Santorini were shaped by digging into the theran earth, which was then used for as the main building material for the rest of the construction. When we visited Therasia, and especially Agrilia, we realized that it is a place where you can really study how people used to build and live in the near past. The settlement of Agrilia is one of the oldest on the island and it was abandoned in 1960s, as its inhabitants migrated to the major urban centers of Piraeus and Lavrio, after the closure of the theran earth mines. So, it is a place that has remained, to some extent, unchanged.
Video on the "Under the Landscape" project

We also realized that this traditional technology is quite unique in Greece; theran earth, the local soil, or "aspa" as it is locally called, is a volcanic material of great technological and commercial value, that has been used in some of the largest projects throughout the Mediterranean - such as the Suez Canal, or the ports of Alexandria and Constanta- until the middle of the 20th century. Before that, theran earth had been used since antiquity -in combination with lime- as a way to make durable mortars and concretes.  Industrial mining was gradually terminated by government law in the ‘70s and ‘80s, to protect the islands from over-mining. This development, along with the introduction of new building materials and practices, led to a decline in the local use of theran earth.” 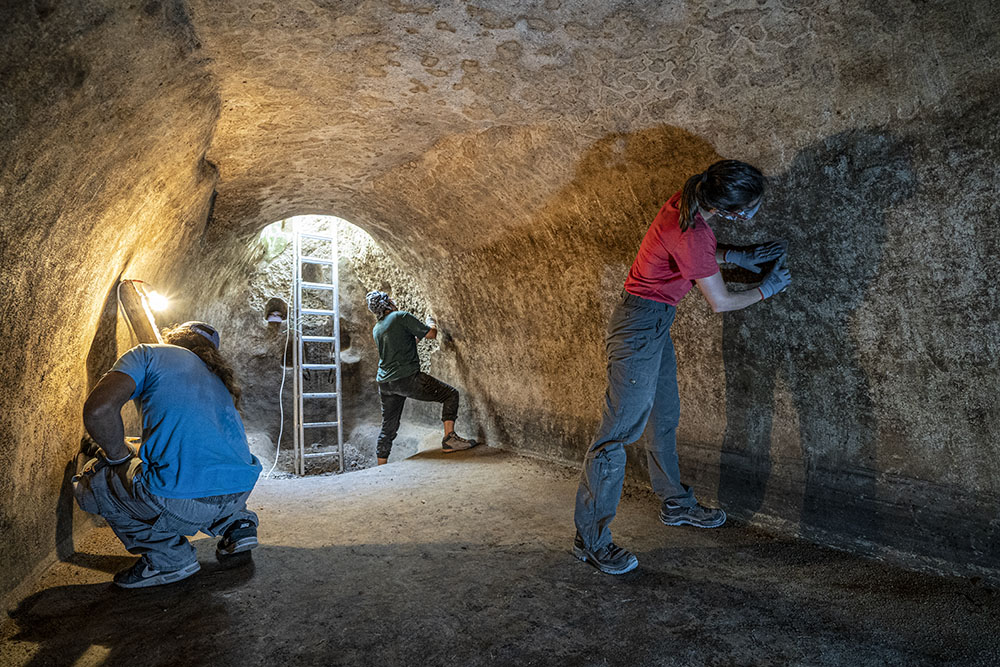 Hands on workshop on traditional building teqniques in Agrilia

Local craftspeople used 'theran tephra', which was collected in situ, as the primary component in the diverse building materials employed in the underground settlements network that was developed in the area throughout the history. So, Boulouki’s objective was the partial retrieval of the forgotten craftsmanship underlying the cave structures of Santorini Archipelago, the design of compatible and optimized materials to be applied in selected locations of Agrilia settlement, as well as the implementation of a restoration project that fosters the use of traditional techniques and engages local masons.

The restoration project, that was completed in September 2021 focused on the restoration of a large part of the central cobblestone pathway (kalderimi) of the underground settlement of Agrilia, as well as its lateral walls, using the dry-stone technique. The central cobblestone pathway used to be the main road of the settlement, while it also functioned as a river’s bed with the seasonal flow of the streams. Even today, locals indiscriminately use the terms ‘road’ and ‘river’ to refer to it. 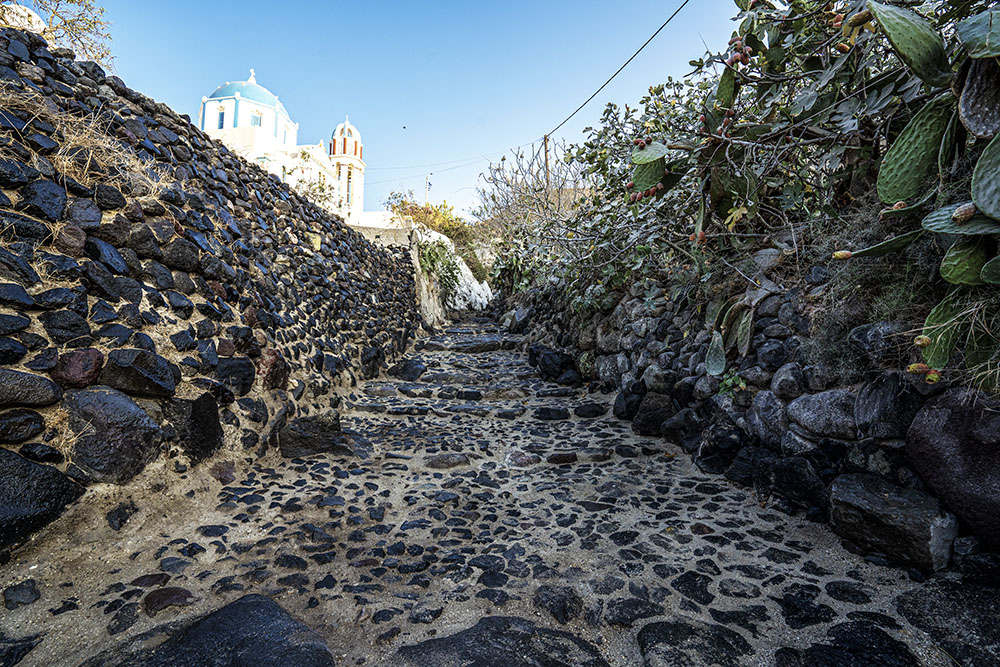 The restoration of the cobbled pathway (kalderimi) in Agrilia completed

With these particular characteristics in mind, construction improvements were not only designed to better manage the water flow, but also to enhance the public space: by reinforcing weak parts of the pathway, widening several areas and creating rest stops. At the same time, two underground rainwater collection cisterns were integrated into the structure of the pathway and were repaired with theran mortars. The outer cistern area, for collecting and directing the water, was reconstructed by applying the technique of ‘pumice concrete’, a local traditional concrete made of lime, theran earth and pumice. Restoration works were implemented through a professional apprenticeship and a 12-day hands-on workshop, while the local community was engaged through days of open participation.

​Regarding their next steps, members of Boulouki tell us: “We are currently working with the National Technical University of Athens on publishing an open access guide of good construction/ restoration practices, which we hope will be a reference for future interventions in the area and also trigger similar initiatives for other areas! The guide also intends to be an incentive to reconsider some issues that depend on the legislation. Theran earth is a material that comes as a leftover from excavations and is unfortunately often thrown away. It could be recycled for construction purposes, but in order for this to be done, the relevant legislation must permit and regulate the use of theran earth (as well as other local materials) and provide the right specifications.” 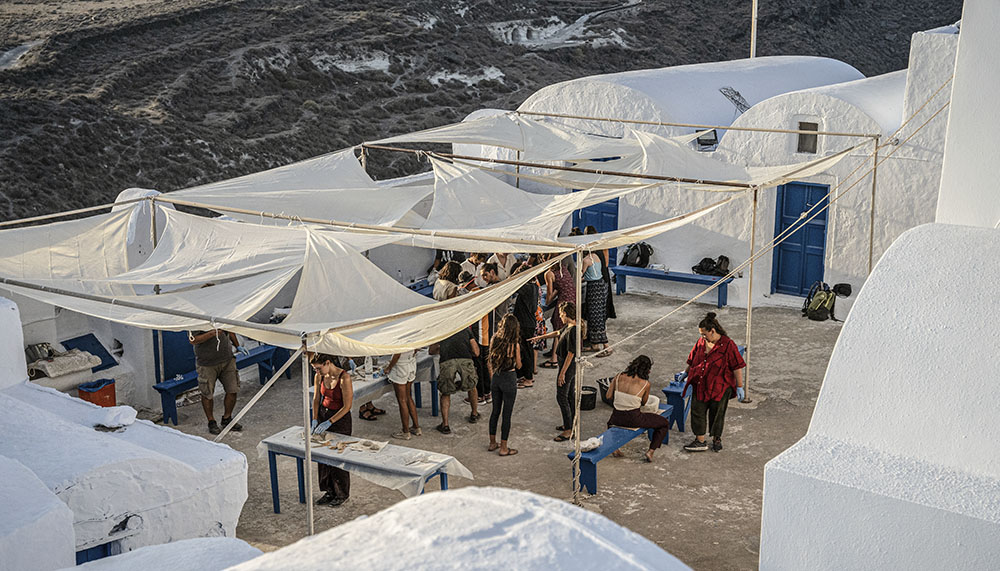 The Symposium Under the Landscape takes place in the Greek islands of Santorini and Therasia, from June 26 to June 29. It comprises of five keynote lectures by distinguished thinkers and a three-day workshop for young researchers. As the team tells us: “Following the field-research and the restoration, the Symposium aims to be the theoretical counterpart of the project and to generate an interaction between different disciplines around the study of landscapes. Apart from the lectures and the workshop, we will hold roundtable discussions with public and private organizations involved in the cultural heritage field, to trigger a dialogue on issues regarding building culture and cultural heritage practices.”

The Symposium is a two-fold event: The first day (26 June) takes place in Santorini as a conference open to the public. It features keynote lectures by philosopher of art Karsten Harries, cultural geographer Kenneth Olwig, landscape architects Teresa Gali-Izard and Jane Hutton, and anthropologist Tim Ingold. In the following three days (27, 28 June and 29 June) the Symposium moves to the island of Therasia – just a few sea miles from Santorini – taking the form of an itinerant, outdoor workshop focused on the research of fifteen young researchers.

A two-part Exhibition complements the Symposium: “The first part in Santorini, at the Tomato Industrial Museum 'D. Nomikos', entitled 'Knowing from Below', curated by museologist Erato Koutsoudaki, presents in detail the distinctive methodology, findings, and results of the project 'Under the Landscape'. In Therasia, the exhibition is entitled ‘In Ex Situ' and focuses entirely on its artistic dimension; it will include sculptures by professors of the School of Fine Arts, as well as sculptures and painting created especially for the project by local artists. In addition, sculptures created by Athens School of Fine Arts students during the hands-on workshop in September 2021 will be on display. The sculptural artworks which were made by local building materials, theran earth and lime – showcase a more free and expressive function of these materials.” 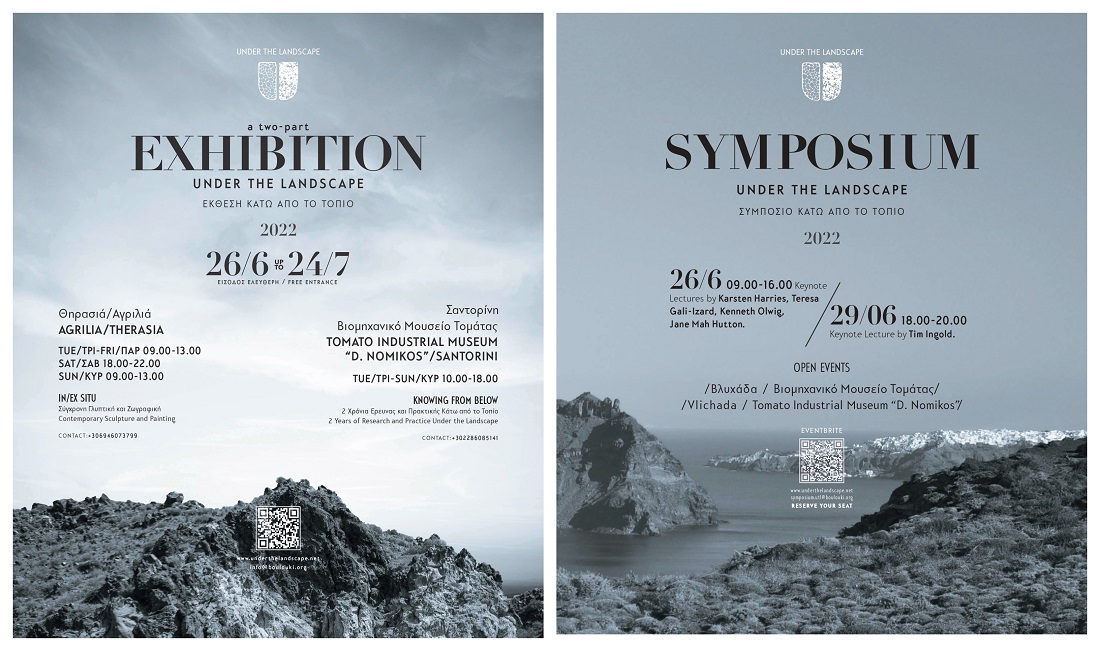 Boulouki's current projects include the study of historical bridges in Ikaria,  traditional lime kilns in Albania and Epirus and stone crafting art of the silk-makers of Evros, among others. You can found out more about their work on their facebook and instagram pages.