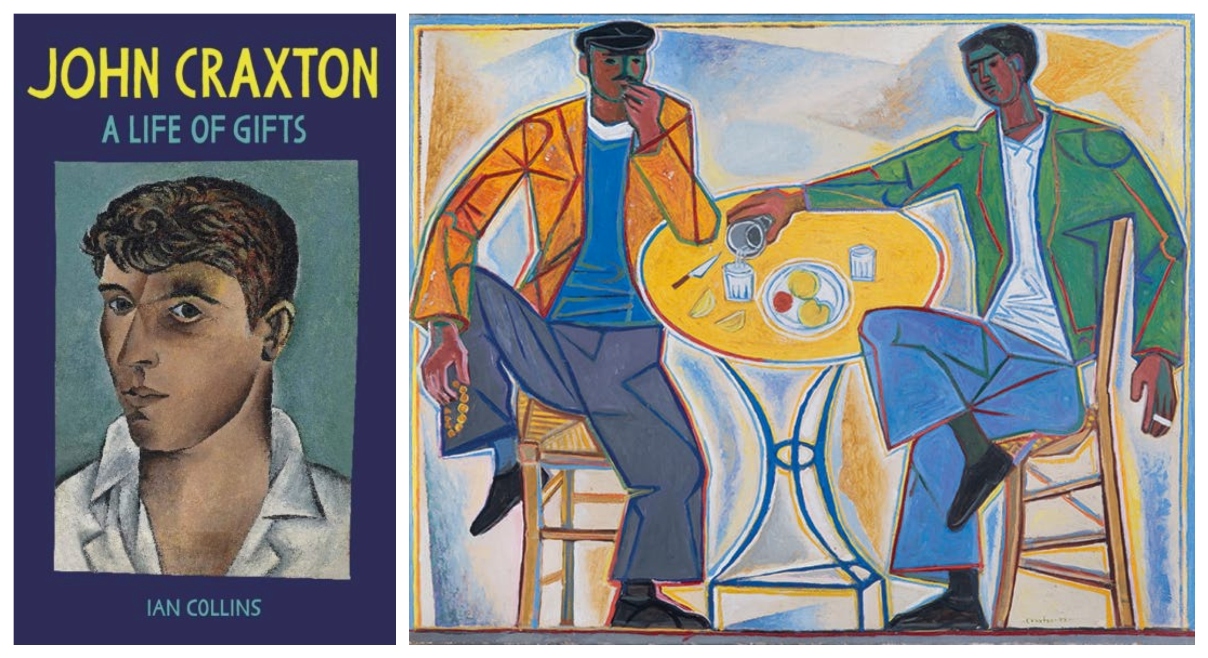 The winner of the Anglo-Hellenic League Runciman Award 2022 is Ian Collins’ book John Craxton: A Life of Gifts. Announcing the result of this year’s competition on Monday 13 June at a ceremony in the Great Hall of King’s College London, in the presence of the League’s Chief Patron & President, HRH Prince Michael of Kent, and a large audience, Prof. Peter Frankopan, the chair of judges, said:

‘This was a wonderful year to be a judge of the Runciman Award. The books we read were a glorious kaleidoscope that showed the range of interest in all things Hellenic, from the ancient world to the present, from poetry to historical fiction, from top class classical studies to translations of Byzantine texts. As usual, we deliberated long and hard to try to choose one book from this impressive collection. In the end, we decided that John Craxton: A Life of Gifts by Ian Collins, was the most exciting and interesting – and a perfect winner of this prize. Furthermore, we felt that Sir Stephen Runciman would have heartily approved of our choice.’

The 2021 winner was Roderick Beaton for his brilliant “Greece: Biography of a Modern Natiohn”. Worth £10,000, the Runciman Award was founded in 1983 in honour of Sir Steven Runciman, the British historian and Byzantinist. The prize is administered by the Anglo-Hellenic League under John Kittmer, former UK ambassador to Greece, and is currenty sponsored by the A.C. Laskaridis Charitable Foundation and the A.G. Leventis Foundation. Previous winners have included Mark Mazower, Antony Beevor, Richard Clogg,K.E. Fleming, Emily Greenwood, Juliet du Boulay, Bruce Clark and of course, Roderick Beaton, the only author to have won it four times.

‘Winning the 2022 Runciman Award is an enormous honour for me – and it’s the icing on the cake in John Craxton’s centenary year. The complete Philhellene and the ultimate hedonist, John Craxton wanted only to live and work in Greece. He got his wish at the age of 23 and enduring joy coloured his ensuing pictures. But he long resisted a biography. We were close friends for his last decade and when he finally agreed that I could tell his story, I confessed to keeping copious notes since our first meeting. Many interviews followed and ended at his hospital bed in 2009. I have remained happily in his company ever since, putting together A Life of Gifts. This wonderful award is really for him – a magical artist and a supreme sensualist, wit and anarchic spirit who enjoyed a life-long love affair with Greece.’

The Chair of the Council of the League, Dr John Kittmer, said: ‘Many congratulations to Ian Collins for his magnificent winning biography of John Craxton. The AngloHellenic League celebrates the very best of what binds Britain and Greece together. Through his life and work John Craxton expressed through artistic creation the love that flows between our two countries. It’s a great book of a wonderful life.’

Ian Collins is an independent art writer and curator. He has written monographs on Rose Hilton, Joan Leigh Fermor and John McLean and has worked with galleries from the Yale Center for British Art in New Haven, to the Sainsbury Centre in Norwich. He co-curated the popular 2017-18 exhibition ‘Charmed Lives in Greece: Ghika, Craxton, Leigh Fermor’, which toured from the A.G. Leventis Gallery in Nicosia to the Benaki Museum in Athens and the British Museum in London. Now he is curating John Craxton’s centenary touring exhibition: John Craxton: A Greek Soul. The show is running at the Benaki Museum in Athens until 11 September 2022 before moving to Chania’s Municipal Art Gallery (October 2022 to the end of January 2023) and Mesher Istanbul (March to June 2023). Then it will come to the UK. Ian lives in England and Greece.

The shortlist of the eight candidates for the 2022 award was:

According to the Washing Post: “Nektaria Anastasiadou’s debut, “A Recipe for Daphne,” is perhaps the first contemporary novel in English set among Istanbul’s dwindling population of Rum — Greek Orthodox Christians, some of whom trace their roots back to the Byzantine Empire. It’s also a novel to be thoroughly savored, from its enticing culinary elements to its charming love stories. The story revolves around Daphne, a young American woman who has come to the city of her parents’ birth to explore her heritage.”

The Byzantine Sinbad collects ‘The Book of Syntipas the Philosopher’ and ‘’The Fables of Syntipas, both translated from Syriac in the late eleventh century by the scholar Michael Andreopoulos. Originally written in Persian and part of a multilingual and multicultural medieval storytelling tradition, The Book of Syntipas recounts how the Persian king Cyrus’s unnamed son is falsely accused of rape by a royal concubine. While the young man awaits execution, seven philosophers and the concubine attempt to influence Cyrus’s judgment. The sixty-two moral tales in The Fables of Syntipas are inspired mainly by the tradition of Aesop but include fifteen that are uniquely attributed to the philosopher.

The Guardian wrote: “The Women of Troy draws mainly Euripides’ tragedy The Trojan Women. This is a story not of conflict but of its aftermath. Clearly and simply told, with no obscurities of vocabulary or allusion, this novel reads sometimes like a retelling for children of the legend of Troy, but its conclusions are for adults – merciless, stripped of consoling beauty, impressively bleak.”

Uplifting and engaging, this story recounts the life and career of a rebellious 20th-century British artist. Born into a large, musical, and bohemian family in London, the British artist John Craxton (1922–2009) has been described as a Neo-Romantic, but he called himself a “kind of Arcadian”. Ian Collins expands our understanding of the artist greatly—including an in-depth exploration of the storied, complicated friendship between Craxton and Lucian Freud.

Eleftherios Venizelos (1864 - 1936) was the outstanding Greek statesman of the first half of the twentieth century. Michael Llewellyn-Smith traces his early years, political apprenticeship in Crete, and energetic role in that island's emancipation from both Ottoman rule and the arbitrary rule of Prince George of Greece. The TLS writes: In his major biographical study, Michael Llewellyn-Smith, a recent ex-British Ambassador to Greece and a historian of the First World War period, is well placed to interrogate the inherited narrative on both modern Greek history and Greek–British elite relationships.

From one of Britains leading historians, an enthralling and definitive new history of the Greek War of Independence—the ultimate worldwide liberal cause célèbre of the age of Byron, Europe’s first nationalist uprising, and the beginning of the downward spiral of the Ottoman Empire—published two hundred years after its outbreak.

Lyrical, unsettling and evocative, Daughters of the Labyrinth explores the power of buried memory and the grip of the past on the present, and questions how well we can ever know our own family.

With its focus on issues such as identity, antiquity, religion, language, literature, media, cinema, youth, gender and sexuality, this study is one of the first to examine cultural trends in Greece over the last fifty years. Aiming for a more nuanced understanding of recent history, the study offers a fresh perspective on current problems.