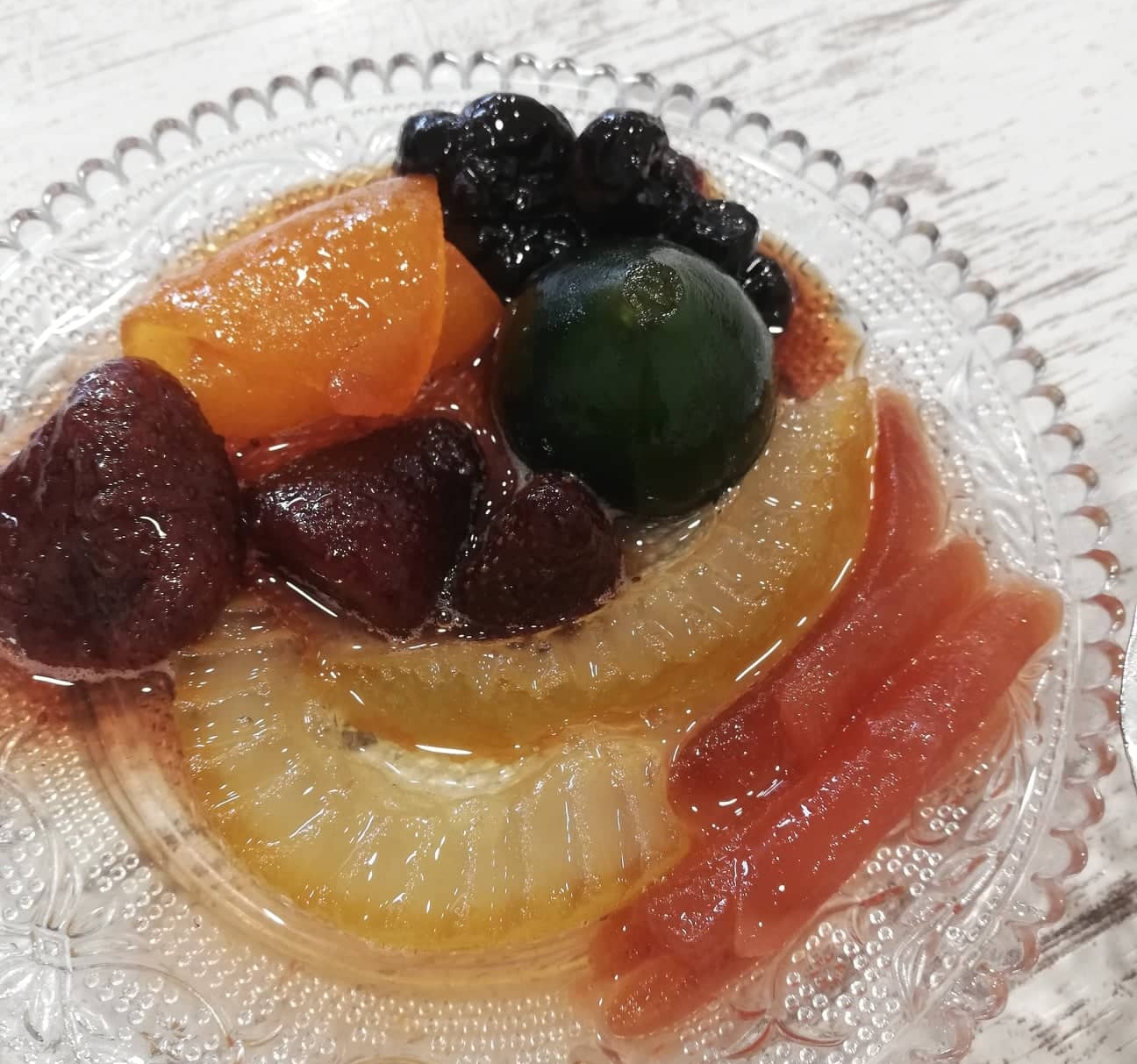 Greece has an abundance of products that have a naturally sweet taste; thanks to their great variety, Greek cuisine features a number of desserts using ingredients such as fresh and dried fruit, honey, nuts and dairy. Arguably the most typical homestyle Greek dessert is what we call a "spoon sweet": a preserve made from almost any type of fruit, but also from various nuts and even some vegetables!

As a general rule, the preparation of a spoon sweet includes boiling the main ingredient (usually some type of fruit) in sugared water, often for several hours and, sometimes, in several stages, until it is candied and a thick syrup is formed. Usually, this has to be preceded by some -often demanding- process such as cleaning, cutting/grating, removing the seeds/pits, debittering and/or blanching, depending on the type of fruit (or other basic ingredient). Lemon juice is usually also added to prevent oxidation, while other ingredients may include glucose syrup, honey, cognac, cinnamon sticks, cloves, flower water, vanilla, rose geranium etc., which add flavor or help improve the syrup’s consistency. Sometimes nuts (usually blanched almonds) may be added. Spoon sweets have a high sugar content but are generally considered a healthy alternative for those avoiding fat, while they also only contain natural preservatives. 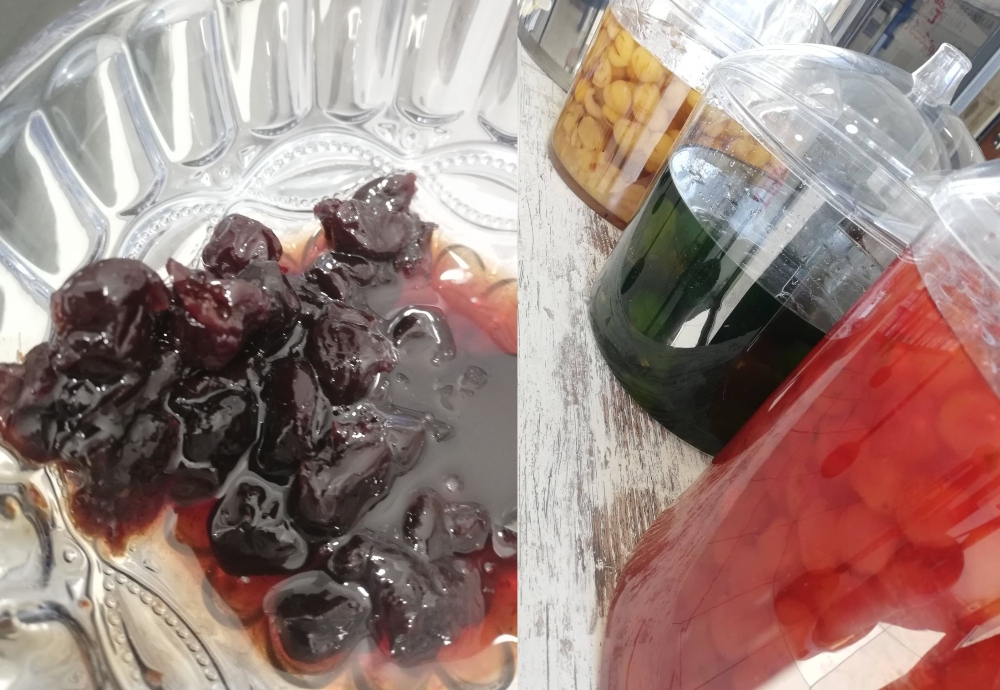 Traditionally, spoon sweets were prepared not so much for the members of the household, but for the guests, and usually served not as part of a formal meal but as a treat always at hand for any guest that might enter a house, along with a cup of Greek coffee or a tall glass of water. In fact, being able to offer guests a selection of various spoon sweets was a source of great pride for the host. The name of the dessert is owed to the fact that, especially in former times, a dessert spoon was used not only to eat, but also to serve it: in some cases, the entire vase could be placed on a coffee table and each guest could dip their individual spoon and help themselves to a mouthful, then leaving the spoon on the side.

Dipping a second time was frowned upon, not only for hygienic reasons but also because this would spoil the preserve, causing its syrup to crystallize and dry out. More generous hosts might provide a guest with two spoons, so they could have seconds, but it soon became a custom to place the spoon on a saucer, so that the guests could have a bigger serving as well as savour the dessert more slowly, without the risk of staining their clothes. 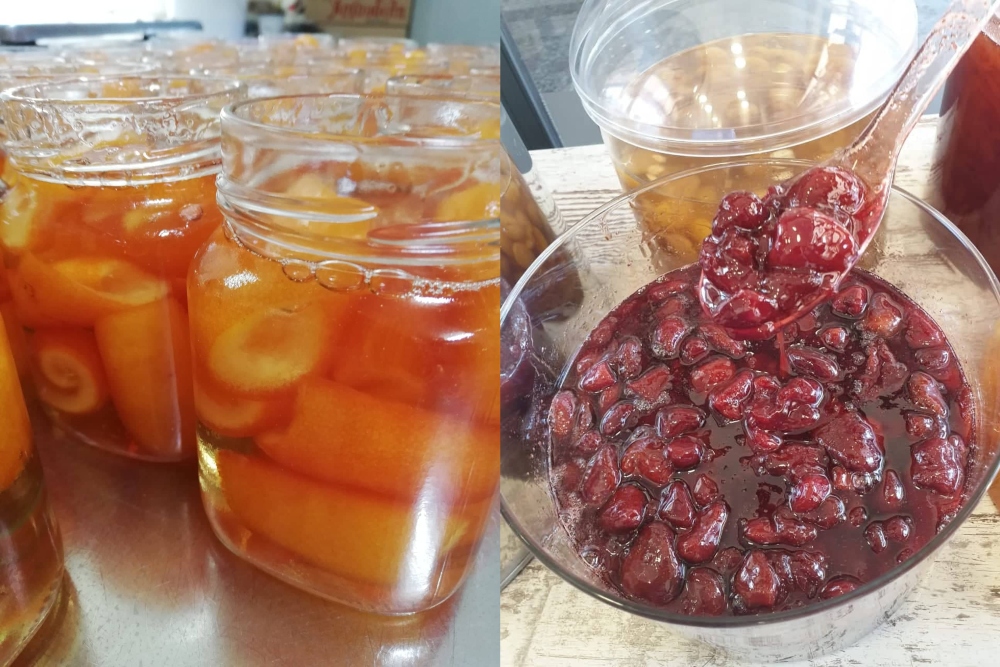 In many parts of Greece, spoon sweets were also a traditional treat at engagements, weddings and christenings. This tradition has been revived in recent years, and small jars of spoon sweets are often given out as wedding or baptism favours, along with or instead of the bombonieres (small pouches of koufeta "almond dragées").

One of the most common uses of spoon sweets nowadays is as toppings for ice cream and yogurt. A bowl of traditional kaimaki (chewy, mastic-flavoured ice cream) topped with sour cherry preserve is one of the most characteristic summer desserts in Greece. Another classic is a serving of Greek yogurt smothered in aromatic cherry, sour cherry, quince, fig or orange spoon sweet; it’s a common treat at the end of the meal in many Greek taverns as well as in Greek homes. 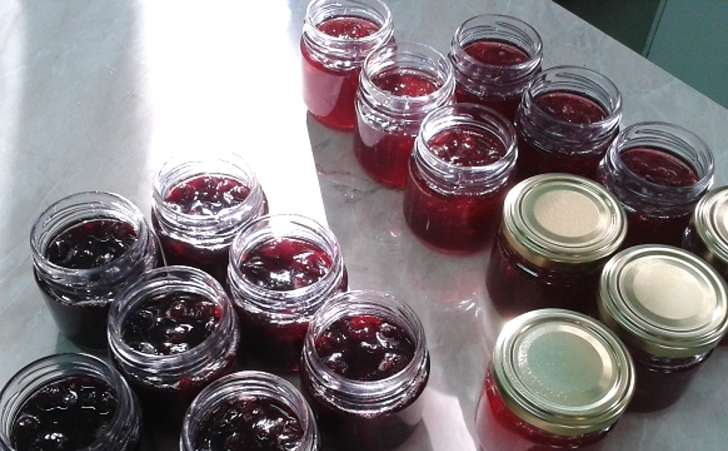 The most common ingredient used in spoon sweets made across the country is fruit; it is especially interesting that one can find many preserves that are made using not just edible fruit –such as cherries, grapes, strawberries, apricots, apples, pears and cherry plums– but also, very often, either fruit that is never eaten raw –such as sour cherries, kumquats and quinces– or parts of the fruit that are not considered edible, including orange, lemon, tangerine, bitter orange or bergamot orange peels, melon and watermelon rind and entire figs with their skin.

This not only helped helped extend each fruit’s lifespan when they were off-season, but also helped use of parts of the fruit that would have been otherwise thrown away (such as skins, peels and rinds), at a time when food was scarcer.

Arguably the strangest ingredients used to make spoon sweets are nut drupes, vegetables and even flowers! Pistachios, a famous PDO product of the island of Aegina, close to Pireaus, are used to make the much-loved fistiki spoon sweet: although the actual (ripe) nuts are often added to the dessert, the preserve is made from the–otherwise inedible– pistachio fruit which contains the nut. Similarly, the fruit of the walnut tree –of which the walnut is the seed – are used for the equally famous karydaki sweet. In both cases, the entire drupe (fruit) is used, when it is still green and soft, before the seed ripens and forms a hard shell (which we would break and throw away when eating the nut). Another "wintry" spoon sweet is made from chestnuts, and it is reminiscent of the candied chestnuts eaten elsewhere in Europe. 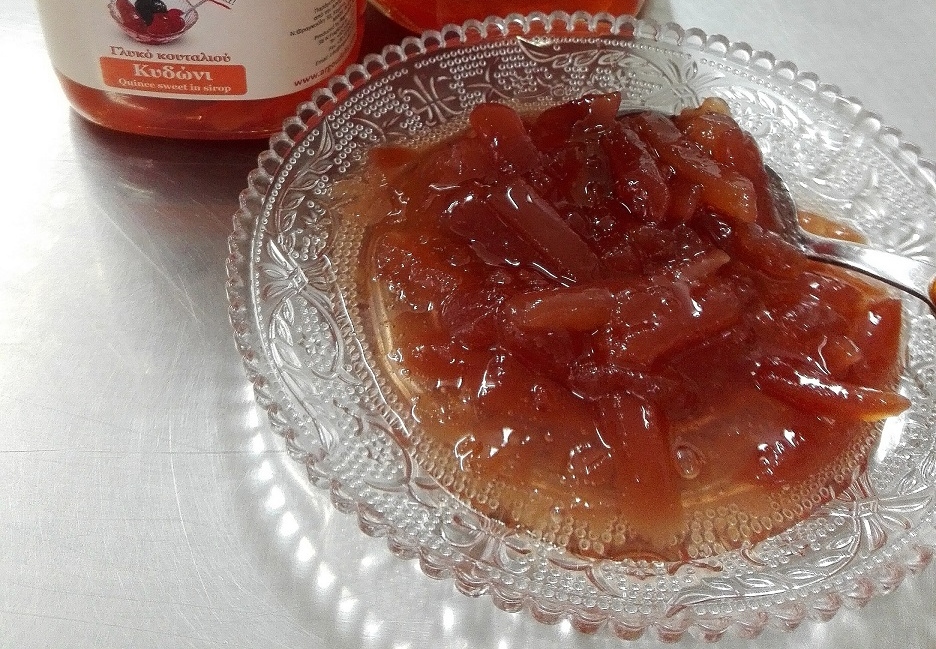 Certain vegetables are also made into spoon sweets in many parts of Greece; the use of squashes and carrots might not seem too unfamiliar to foreigners, as these are often used in pies, cakes and other desserts in the English-speaking world. However, many might be surprised to find out that two of the most traditional and famous spoon sweets are domataki and melitzanaki, made from grape tomatoes and aubergines (eggplants) respectively; in both cases, they have to be small and slightly unripe.

Another spoon sweet that is considered rare and strange even among most Greeks is the one made from olives; it can be made using ripe olives of several varieties, including green olives and the famous dark PDO Kalamata olives. On the other hand, one of the most popular spoon sweets, often called rodozahari (rose sugar) is made from entire rose petals; after a special process, they are candied and become plum and juicy, still retaining a pleasant chewiness and their distinctive pink hue. Another flowery –although much rarer– recipe sees the use of citrus blossoms (from lemon, orange, tangerine or other citrus trees).

N.M. (All all photos courtesy of Argoudelis Ltd; licensor retains all copyright)