"The Epic of Anatolia in the Greek Imagination" at ASCSA 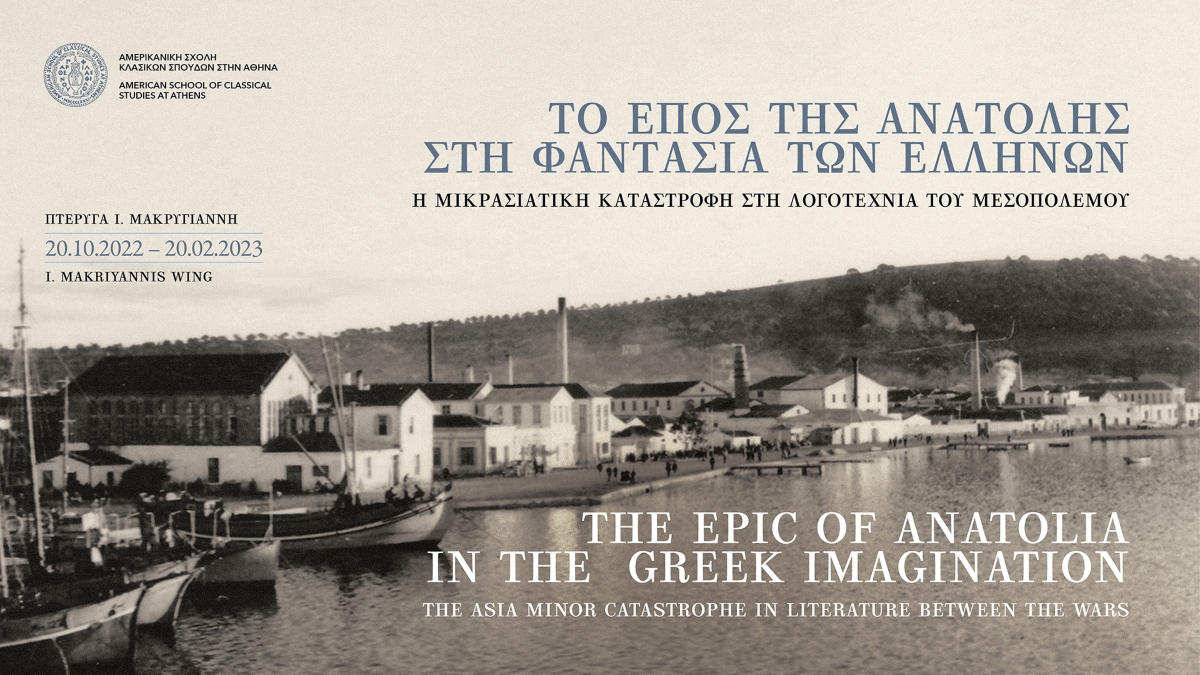 The American School of Classical Studies at Athens presents the exhibition The Epic of Anatolia in the Greek Imagination. The Asia Minor Catastrophe in Literature Between the Wars, to mark the centenary of the Asia Minor Catastrophe; the exhibition examines the way in which the armed conflicts of the early 20th century influenced the literary production in interwar Greece.

The history of Hellenism in the area of Asia Minor goes back as early as the 9th century BC, with the establishment of Aeolian, Ionian and Dorian colonies. Greeks maintained a strong presence in Anatolia, especially following the establishment of the Hellenistic kingdoms and, later, the Byzantine Empire, which was centred around Constantinople. Even after the entire Greek world became part of the Ottoman Empire, the Greek population of Constantinople, Smyrna, Ayvalik and other Anatolian cities and villages continued to form an integral part of the area’s cultural profile.

In the beginning of the 20th century, these Greek communities experienced a period of great flourishing, soon to be followed by persecutions, first due to the outbreak of World War I (where Greece and the Ottoman Empire fought on opposing sides) and then due to the Greco-Turkish War of 1919-1922.

Greece, which had entered the Great War on the side of the Allies with the understanding that they would have territorial gains at the expense of the Ottoman Empire, occupied the area of Smyrna with the support of the winning forces of WWI; incensed by the persecution of the Christian populations before and during the First World War and enthralled by the irredentist Great Idea (Megali Idea), the Greek forces advanced further to secure their hold over the region, but were eventually pushed back by the Turkish military, culminating in the destruction of the city of Smyrna on 14 September 1922 which resulted in a massive exodus; the population exchanges stipulated by the Lausanne Peace Treaty of 1923 caused an even bigger wave of refugees to Greece. 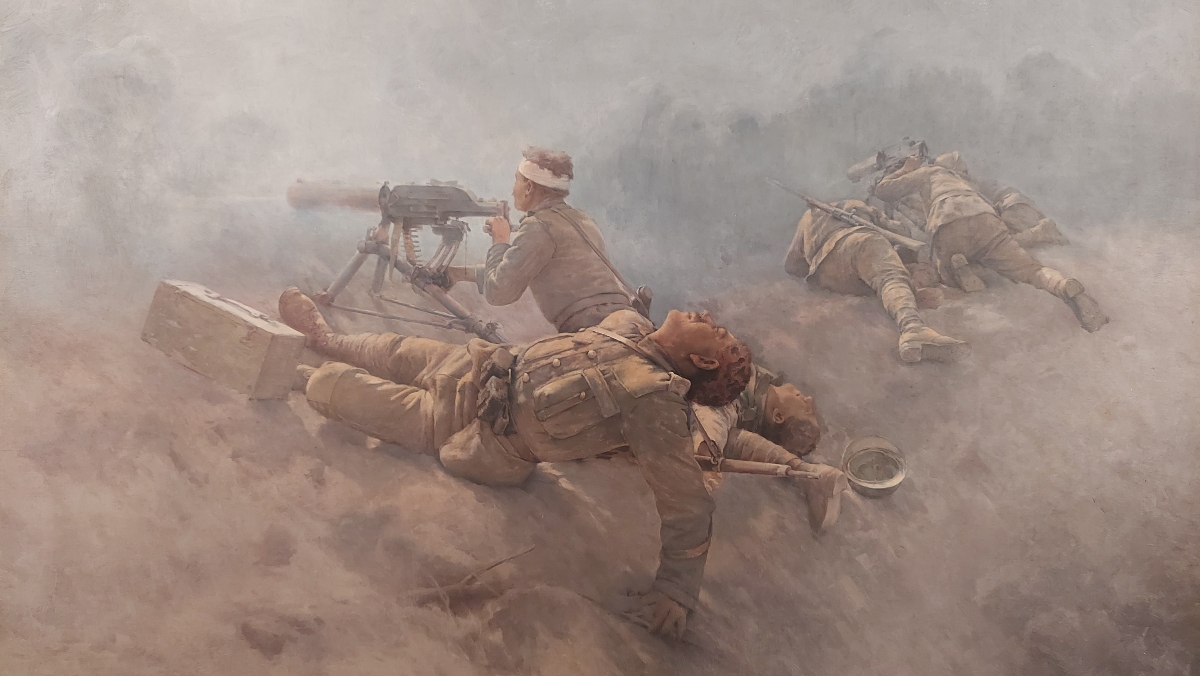 To the last man (Mehris Eschaton), 1921, by Georgios Prokopiou (1876-1940), who captured scenes from the front line both with his brushes and his camera (displayed on loan from the Art Collection of the National Bank of Greece)

A generation marked by war

A decade of wars (1912-1922), the Asia Minor Catastrophe and the collapse of the Great Idea had a great impact on the society and, by extension, the literature of interwar Greece. The most prominent Arts and Letters movement at the time was the so-called Generation of the '30s, the dominant expression of Modernism in Greece. One of its main features was that it combined folk and modern artistic elements in the quest for the quality "Greekness".

The writers, poets and artists of this generation were deeply affected by the Asia Minor Catastrophe and the preceding wars – often on a very personal level, having taken active part in those armed conflicts and/or having been displaced from their homelands. Moreover, Greece’s defeat and the ensuing political unrest was a heavy blow to the image and national self-perception of the Greek people, and this led many of the most creative parts of society to turn to their cultural tradition to draw strength and inspiration, reinventing the Greek identity.

Several of the most important representatives of the Generation of the '30s and Greek literature in general had experienced first-hand the dramatic events of the 1910s and ‘20s: Stratis Myrivilis fought in the Balkan Wars (1912-13), World War I and the Asia Minor Campaign; Stratis Doukas, born close to Ayvalık (Asia Minor), also fought on the Macedonian and Anatolian front; Ilias Venezis, also born and raised near Ayvalık, was taken as war prisoner in the Turkish "Labour Battalions" and became a refugee; George Theotokas, born and raised in Constantinople, also had to follow his family who fled to Athens after the Greek defeat. 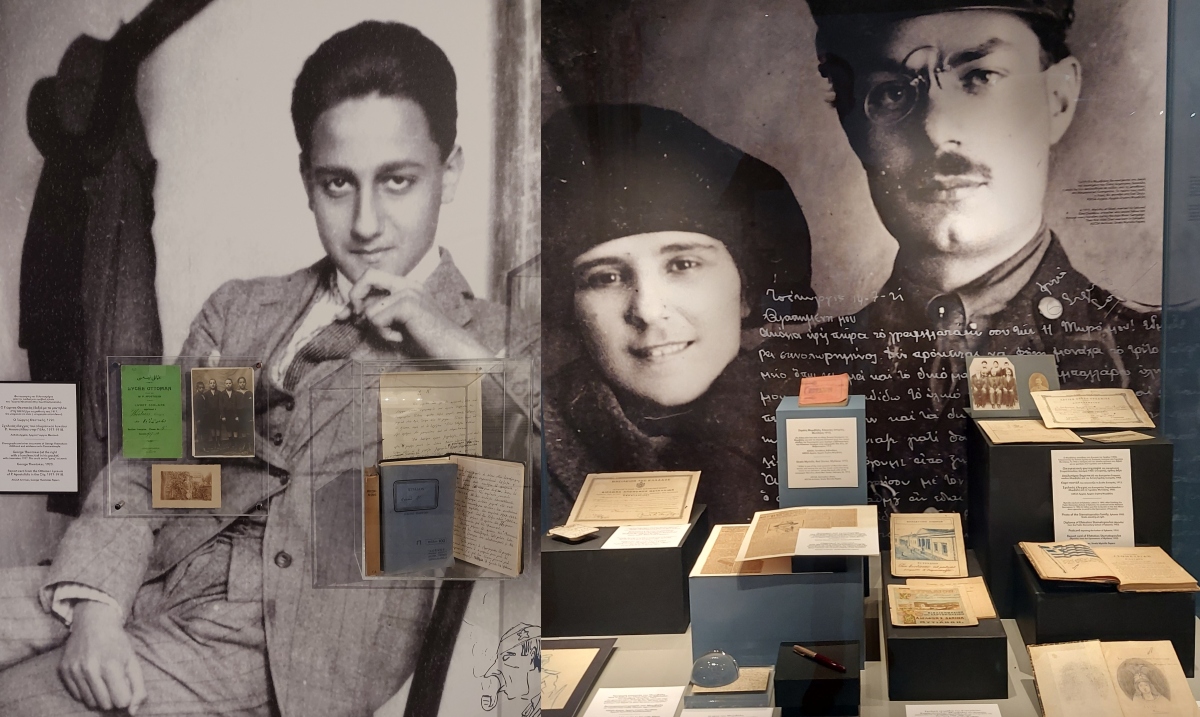 These experiences shaped their creative paths and led to the publication of some of the most important works of this period, including Myrivilis’s Life in the Tomb (1924), inspired by his life in the trenches of the Great War, and The mermaid Madonna (1949), describing the life of Asia Minor refugees, Venezis’s trilogy Number 31328 (1924), Serenity (1939) and Land of Aeolia (1943), where he draws from his own experiences to talk about the horrors of the prisoner camps, the hardship of life as a refugee and the nostalgia for the lost homeland, respectively, A Prisoner of War’s Story (1929) by Stratis Doukas, another harrowing account of life in the Turkish "Labour Battalions" and George Theotokas’s Argo (1936), which describes the disillusionment of the Greek society and the distress of the younger generations after the implosion of the Great Idea.

Even George Seferis, one of the most widely recognised Greek poets (and 1963 Nobel laureate) was born near Smyrna; his family fled the region following the outbreak of the "Great War" in 1914. The loss of his homeland (which became irrevocable after 1922) and the collapse of the Great Idea influenced many of his poems and writings. 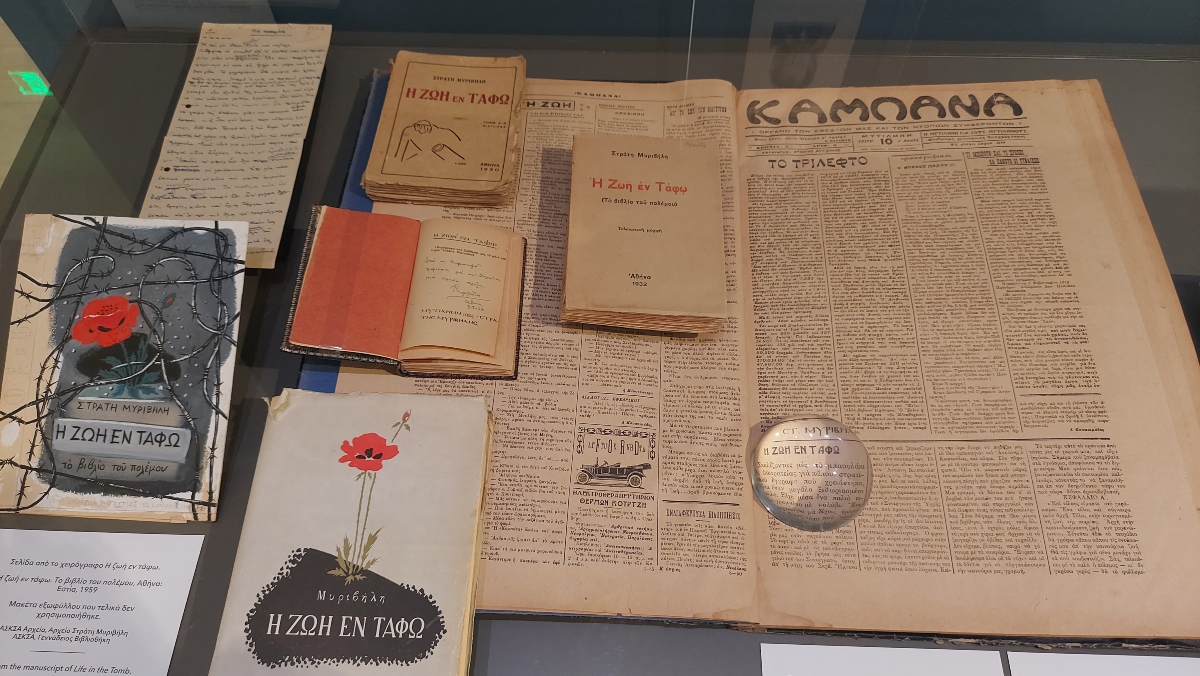 Manuscript and early editions of Life in the Tomb, along with an issue of the newspaper Kambana, where it was originally published in serialised form (ASCSA archives, Stratis Myrivilis Papers & ASCSA, Gennadius Library)

The Epic of Anatolia in the Greek Imagination

The theme of the exhibition is the influence of early-20th century armed conflicts on interwar literature in Greece, with an emphasis on the impact of the ill-fated Asia Minor Campaign (1919-1922) and its devastating outcome. Curated by Natalia Vogeikoff-Brogan & Natasha Lemos, and housed at the school’s Makriyannis Wing, the show is organised into eleven sections and comprises over two hundred exhibits.

Although it is not focused on the Generation of the '30s, some of this generation’s most famous representatives are prominently featured, with the display of rare material drawn from the personal papers of four leading figures of Greek literature of the time: Stratis Myrivilis, Elias Venezis, George Theotokas and George Seferis. The items, many of which have never been presented to the general public before, include journals, correspondence, newspapers, photographs, drawings, and manuscripts, as well as rare first and early editions of their works.

Among the exhibition’s highlights we find letters by George Seferis and a page from the hand-written manuscript of Myrivilis’s Life in the Tomb, as well as an issue of Myrivilis’s newspaper, Kambana, where he first published the novel in serialised form; another impressive exhibit is the tin bracelet with the prisoner number 31328 –given to Ilias Venezis at the Ottoman labour battalions– after which his first, autobiographical novel was titled; it is written in Eastern Arabic numerals, since the (Latin-based) modern Turkish script was not adopted until 1928. 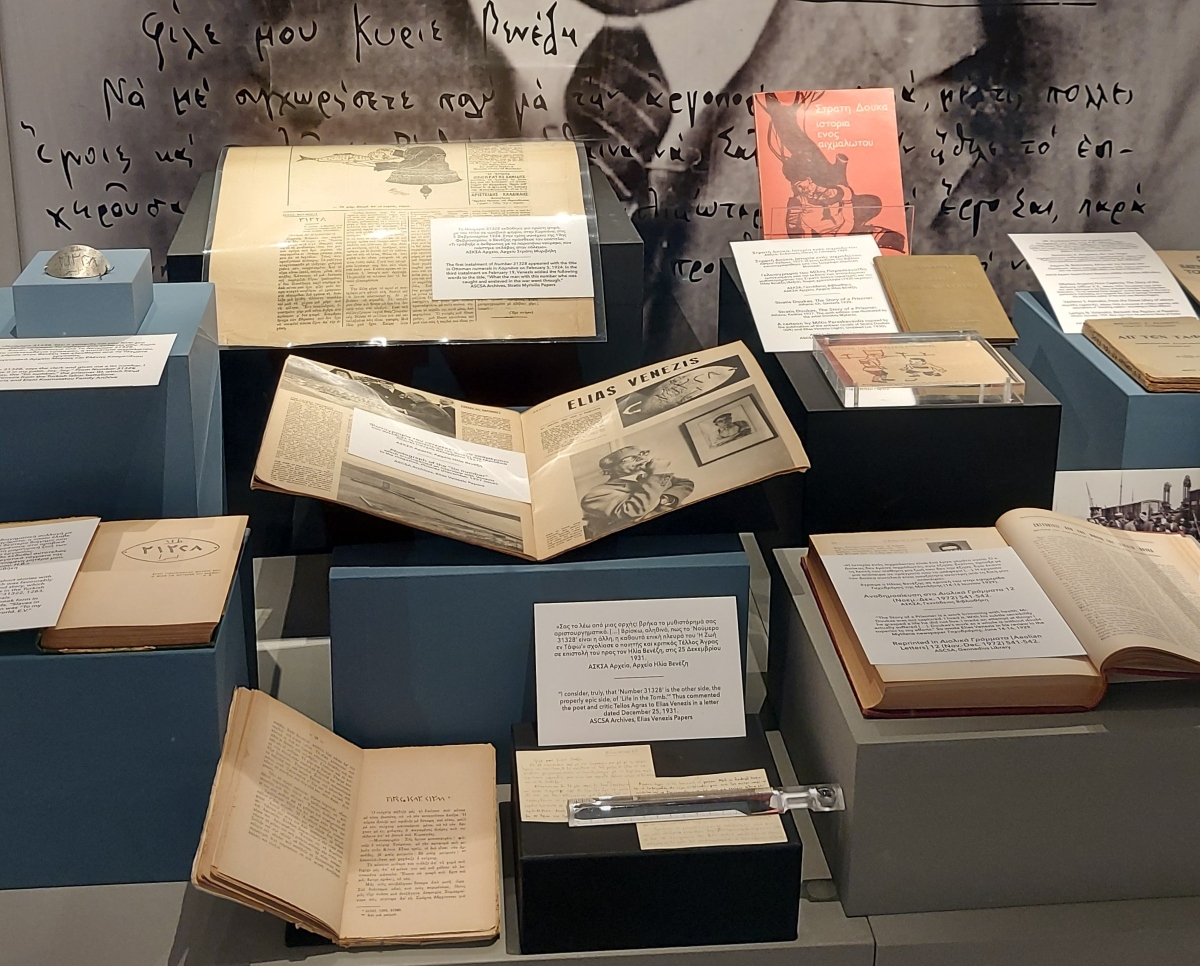 From Ilias Venezis Papers (ASCSA Archives): Early editions of his book Number 31328 (including an issue of the newspaper Kambana, where it was originally published) and of A Prisoner of War’s Story by Stratis Doukas; on the left, the actual tin bracelet with his prisoner number 31328 (Maria and Eleni Kosmetatou Family Archive)A final section of the exhibition is devoted to the impact of the Greco-Turkish War on contemporary Turkish literature, introduces writers little known to Greece, such as Halide Edip and Yakup Kadri Karaosmanoğlu.

The exhibition is complemented with a bilingual catalogue, and will run until 20 February 2023. Admission is free.