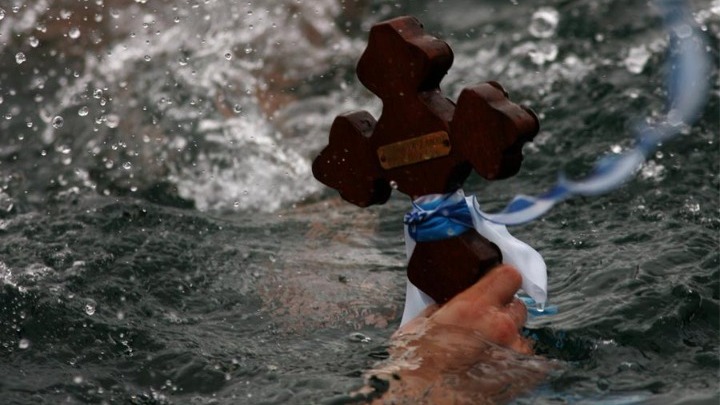 The feast of Epiphany, observed on the 6th of January, marks the end of the Twelve Days of Christmas; although it is observed in both Western and Eastern Christianity, it commemorates completely different events from the life of Jesus each case. The Eastern Orthodox Epiphany, usually referred to as Theophany, commemorates the Baptism of Jesus in the Jordan River, and the traditions of this day are inspired by this event.

In Eastern Christianity, the feast of Epiphany, mostly known as Theophany (Theophania in Greek) is one of the most important holidays, and is among of the Twelve Great Feasts of the Eastern Orthodox Church. "Theophany" means the revelation of God to humans, and this aspect is common in both versions of the feast.

In Western Christianity –meaning both the Latin Church and the Protestant Church, along with their various denominations– the day of Epiphany commemorates the Adoration of the Magi, that is, the day when the Three Magi (also known as Three Wise Men or Kings) visited the Christ Child and offered him gifts of gold, frankincense and myrrh. In the context, the Epiphany takes the sense of Jesus’s manifestation to the gentiles, who come to worship him.

The scene of the Adoration is depicted in Orthodox icons, but there is no separate feast dedicated to this event; it is commemorated on Christmas Day, along with the Adoration of the Shepherds. 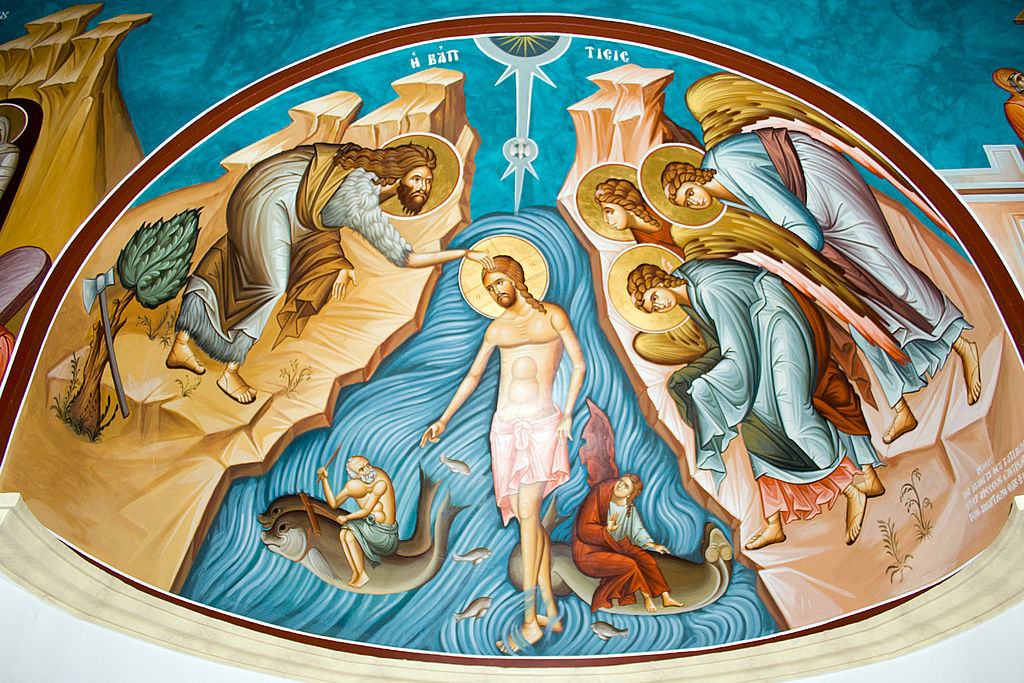 Mural from the newly built Greek Orthodox Church of Saint John the Baptist in Jerusalem, depicting the baptism of Jesus (by David Bjorgen via Wikimedia Commons)

Instead, on the 6th of January, the Eastern Orthodox Church celebrates Jesus Christ’s baptism by John the Baptist in the waters of Jordan River. Hence, despite Theophany being closely linked to the feast of Christmas, the events commemorated are not part of the story of the nativity, as Jesus was supposed to be already in his early thirties by the time of his baptism.

In this case, the aspect of Theophany takes on a more literal sense as, according to three of the four gospels –by Mark, Matthew, and Luke– the divine nature of Jesus was made apparent to everyone present at his baptism: they all describe the Holy Spirit descending upon Jesus "in the form of a dove" immediately after his baptism, while the heavens open and the voice of God Himself is heard from above, declaring Jesus to be "His beloved Son". In this way, the Holy Trinity in its entirety is manifested to humans. 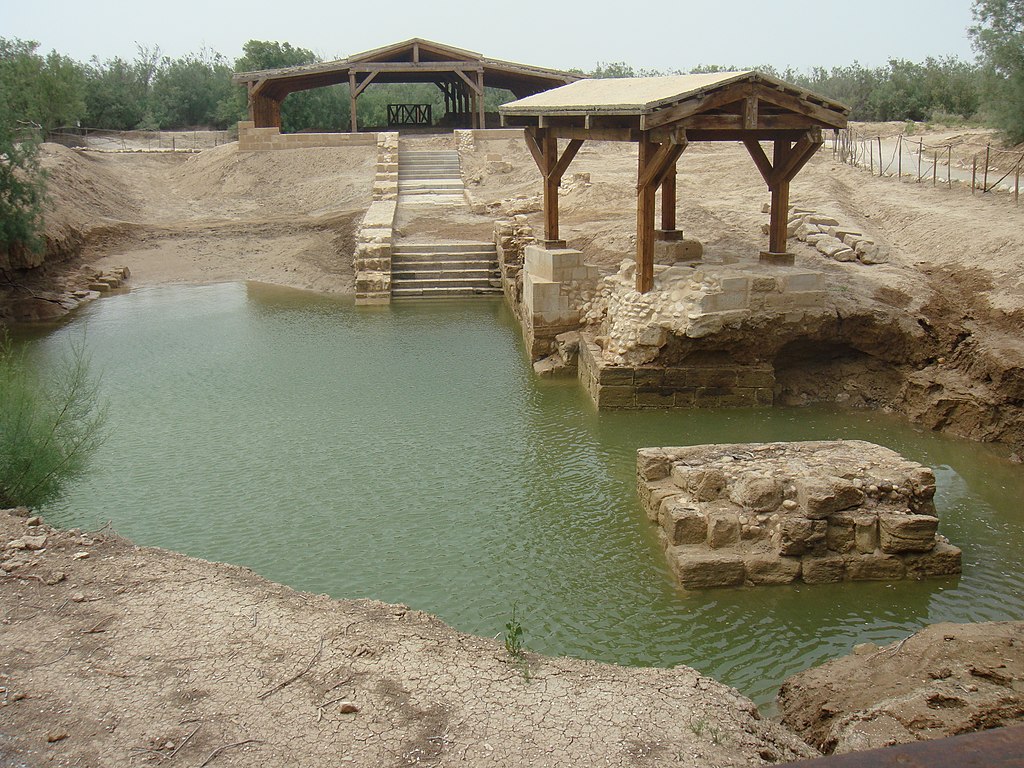 The location where Jesus is said to have been baptised, on the east bank of the Jordan River: Baptism Site "Bethany Beyond the Jordan" in the country of Jordan (by Producer via Wikimedia Commons)

In many areas across Europe and other parts of the world, the feast of Epiphany is celebrated with the tradition of the Kings Cake, which takes its name from the Three Kings (Magi or Wise Men). A token is usually hidden in the he cake or other dessert (galette des rois in France, roscón de reyes in Spain etc), bringing good fortune to the finder. A similar practice is found in the Greek tradition of the vasilopita, which is served on New Year’s Eve and/or New Year’s Day.

In Greece, the feast of Theophania is a public holiday. It is often referred to as the "Feast of the Lights", the"Day of the Lights", or simply "the Lights" (ta Phota, pl. of phos "light"), to symbolise the enlightenement of humanity by the revelation of the Holy Trinity. It is the name day of Theophanis and Theophania (named after the feast), Iordanis (named after the River Jordan), Photios and Photini (deriving from the word "light") and others. 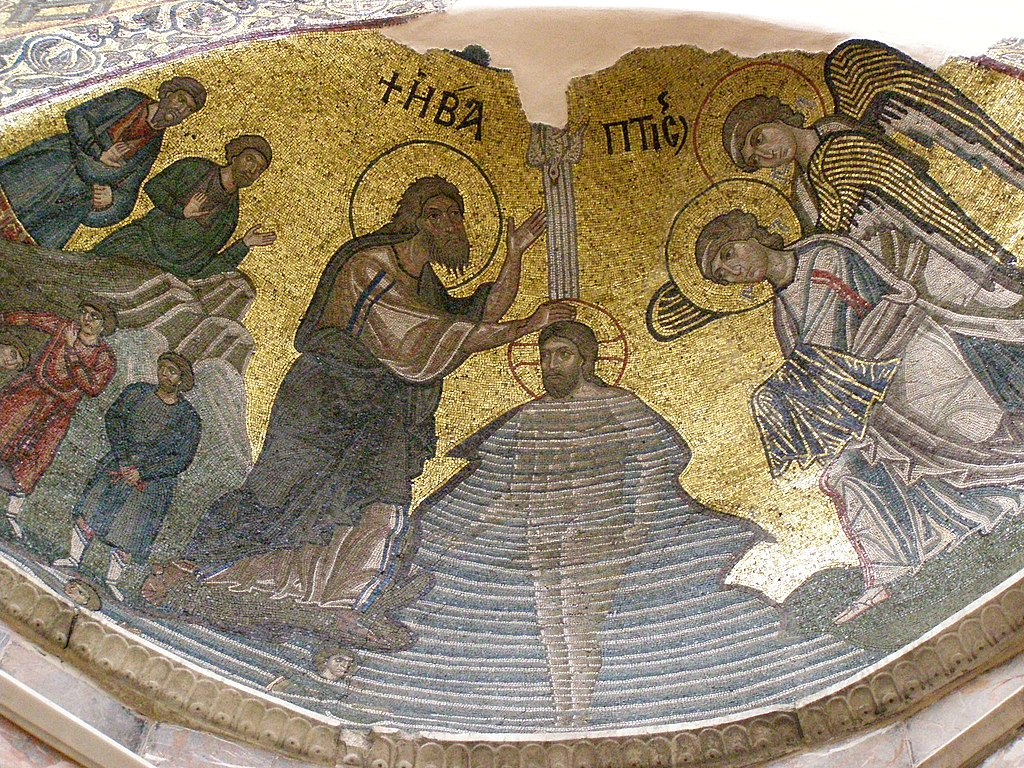 Since it is one of the Great Feasts, its liturgical Forefeast begins already on the second day of the year, and it concludes on the Eve of Theophany (the equivalent of the Western tradition’s Twelfth Night), called Paramony, when a strict fast day is observed by the pious. On the Eve, children often go around singing Epiphany Carols, as they do on the Eves of Christmas and New Year.

The most important part of the feast of Theophany is the Great Blessing of Waters. At the conclusion of the Vespers, on the Eve of the Feast, a font of holy water is typically blessed in the church, to provide holy water for the parish's use in the coming year. On the very morning of Theophany, after the Divine Liturgy, a procession goes from the church to a nearby body of water; in Greece, this can often mean the sea, but it can also be a river, lake or lagoon. The priest reads from the Scripture and chants special hymns, proceeding to bless that water by immersing a hand cross into it three times, in imitation of Christ's baptism, to the singing of the festal troparion. 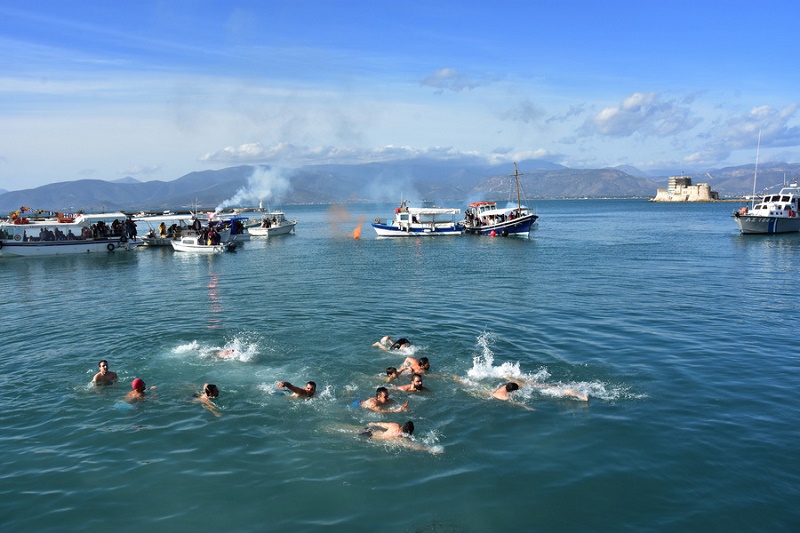 People diving for the cross in the town of Nafplion (Source: Evangelos Bougiotis/ANA-MPA)

This is the moment of the day’s most recognisable tradition: the priest throws the hand cross in the newly-blessed waters, and youths from the parish dive in to try and catch it. The first person to recover the cross is considered to be blessed for the rest of the year. Customarily, it is the young men who dive for the cross in the –usually freezing– sea, river or lake waters (and, in some cases, even in swimming pools), but young women often participate in the tradition in recent decades. There are also various other local traditions depending on the region, such as the Ragkoutsaria in the area of Kastoria, where people wear carnival-like costumes and dance to the music of brass instruments.

In the following days, the priest visits the houses of the parish and blesses them, by sprinkling them with the holy water blessed in the church; in certain places, this can also happen on the Eve of Epiphany. On the following day, Greeks celebrate the feast of John the Baptist (and his respective name day).