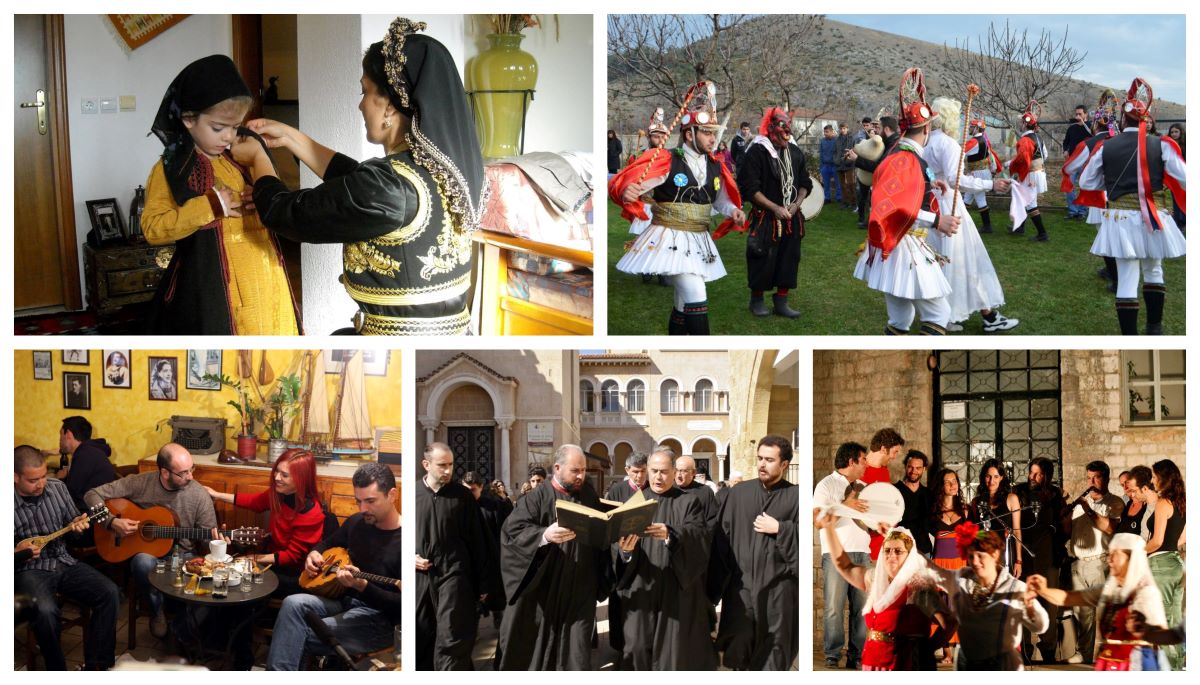 Cultural heritage does not end at monuments and collections of objects. It also includes traditions or living expressions inherited from our ancestors and passed on to our descendants, such as oral traditions, performing arts, social practices, rituals, festive events, knowledge and practices concerning nature and the universe or the knowledge and skills to produce traditional crafts.

UNESCO, the United Nations Educational, Scientific and Cultural Organization, has been pivotal in changing and expanding the term ‘cultural heritage’: in it’s 2003 General Conference, the organization adopted the Convention for the Safeguarding of the Intangible Cultural Heritage. Since then, 180 States have become party to this text, which is now considered a key instrument – not only for the safeguarding of heritage in all its diversity, but also for peace. According to the 2003 Convention, ‘Intangible Cultural Heritage’ means the practices, representations, expressions, knowledge, skills – as well as the instruments, objects, artefacts and cultural spaces associated therewith – that communities, groups and, in some cases, individuals recognize as part of their cultural heritage. This ‘Intangible Cultural Heritage’ , is according to UNESCO manifested in the following domains: (a) oral traditions and expressions, including language; (b) performing arts; (c) social practices, rituals and festive events; (d) knowledge and practices concerning nature and the universe;(e) traditional craftsmanship.

Greece, which has been a party to the Convention since 2007, has 10 inscriptions on UNESCO's representative list of the intangible cultural heritage of humanity, half of which are related to music, dance and folk festivals. The list includes collective practices transmitted from older to younger generations in an informal way that reinforces the cultural identity of the community and contributes to facilitating social integration. These collective practices often offer the opportunity to make the collective memory last, through song, dance and the telling of old tales and stories. The most recent inscription from Greece was made in 2022 and it relates August 15th (Dekapentavgoustos) festivities in two Highland Communities of Northern Greece: Tranos Choros (Grand Dance) in Vlasti village in Western Macedonia and the Festival of Syrráko, a small stone village perched in Epirus.

Find below all the Greek inscriptions relating to traditional music and festivals of Greece listed as Intangible Cultural Heritage by UNESCO:

The Tranos Choros (Grand Dance) and Syrrako festival are celebrated in Greece to commemorate the Dormition of the Virgin Mary. Historically, these Orthodox festivities originating in Vlasti and Syrrako marked the annual reunion of pastoral communities before the sheep or cattle farmers moved to their winter pastures. Although the population of most highland communities has greatly diminished, today the festivals are associated with the reunion of the communities whose inhabitants have migrated to cities. The main feature of both festivals are the ritualistic dances.

For the Tranos Choros in Vlasti, dancers of all ages form a large open circle, holding hands and dancing to a slow and imposing rhythm while singing a cappella. In the Syrrako Festival, a band and singers accompany the dance. In the communities, youth learn the customs by watching the participants and preparations from an early age. Today, cultural organizations also play a key role in transmitting the dances and cultural context. The festivities are viewed as a celebration of both villages’ identities, providing an opportunity for younger generations to connect with their cultural heritage.

The Polyphonic Caravan, selected on the Register of Good Safeguarding Practices is a longstanding project aimed at researching, safeguarding and promoting the Epirus polyphonic song. Performed for centuries, the Epirus polyphonic song is performed by a group of singers with two to four distinctive roles among them, and touches on almost every aspect of life, such as childhood, marriage, death, historical events and pastoral life. In the aftermath of WWII and the ensuing Greek Civil War, the element gradually became sporadic after the inhabitants of Epirus started migrating to large urban centers in Greece and abroad. Eventually, very few experienced performers remained in the villages.

In the mid-1990s, a group of young people, internal migrants from Epirus, formed the first polyphonic group, ‘Chaonia’, in Athens. Realizing the threats the element was facing and the need to cultivate fertile ground for it in the new urban environment, they decided to undertake initiatives to safeguard and promote the element. After Chaonia’s first concert in 1997, they founded the non-governmental organization ‘Apiros (Polyphonic Caravan)’.

As a living art that has existed for more than 2000 years, the Byzantine chant is a significant cultural tradition and comprehensive music system forming part of the common musical traditions that developed in the Byzantine Empire. Highlighting and musically enhancing the liturgical texts of the Greek Orthodox Church, it is inextricably linked with spiritual life and religious worship. This vocal art is mainly focused on rendering the ecclesiastical text; arguably, the chant exists because of the word (‘logos’), since every aspect of the tradition serves to spread the sacred message.

Passed on aurally across the generations, its main characteristics have remained over the centuries: it is exclusively vocal music; it is essentially monophonic; the chants are codified into an eight-mode or eight-tone system; and the chant employs different styles of rhythm to accentuate the desired syllables of specific words. Though the Psaltic Art has always been linked to the male voice, women chanters are common in nunneries and participate in parishes to some extent. We should note that Byzantine chant was also a source of inspiration for the great Greek composers such as Manos Hadjidakis and Mikis Theodorakis.

Rebetiko is a musical and cultural expression directly linked to song and dance that initially spread among the urban lower and working-class populations in the early twentieth century. Rebetiko songs are now a standardized repertoire in almost every social occasion involving music and dance. The element is performed in public and performers encourage audience participation.

Rebetiko songs contain invaluable references to the customs, practices and traditions of a particular way of life, but above all the practice is a living musical tradition with a strong symbolic, ideological and artistic character. Initially, transmission occurred exclusively orally, through the live performance of songs and the instruction of younger performers with older instrumentalists and singers. In the past decade, Rebetiko has increasingly been taught in music schools, conservatories and universities, contributing to its wider dissemination, and the musicians and people who enjoy Rebetiko continue to play a key role in keeping the practice alive. To delve deeper into the world of rebetiko read, our Greek News Agenda special on the subject, Rebetiko music: From the margins to the mainstream. 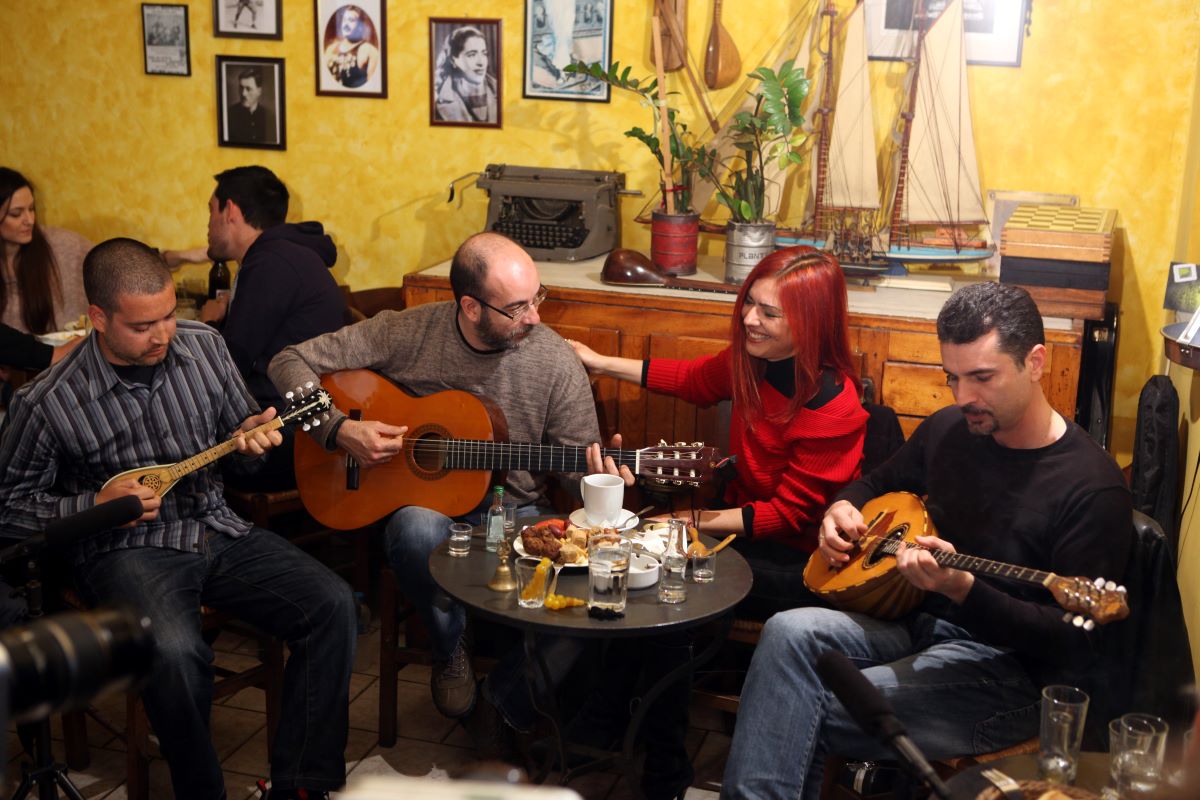 From December 25 to January 5 in Kozani (north-western Greece), dancers, actors and musicians can be seen performing in village streets and visiting people’s homes to celebrate the coming of the new year. The Momoeria dancers, a group made up of 30 male performers, are a special focus. They represent the priests of Momos (god of laughter and satire), or commanders of Alexander the Great wearing helmets, pleated skirts, traditional shoes and brandishing sticks dancing under their leader’s command to convince the powers of nature not to endanger the livelihood of villagers.

Actors surround the dancers performing a well-known satirical play featuring characters like an old man and the devil (this can vary among villages) who the audience is invited to tease creating a fun atmosphere. Instruments like the bagpipe play in the background. The practice is mainly to wish the community prosperity in the year ahead, including healthy offspring and good harvests but now also encourages the sustainable management of natural resources. Festivities culminate in the town square with everyone singing and dancing around a fire until morning. 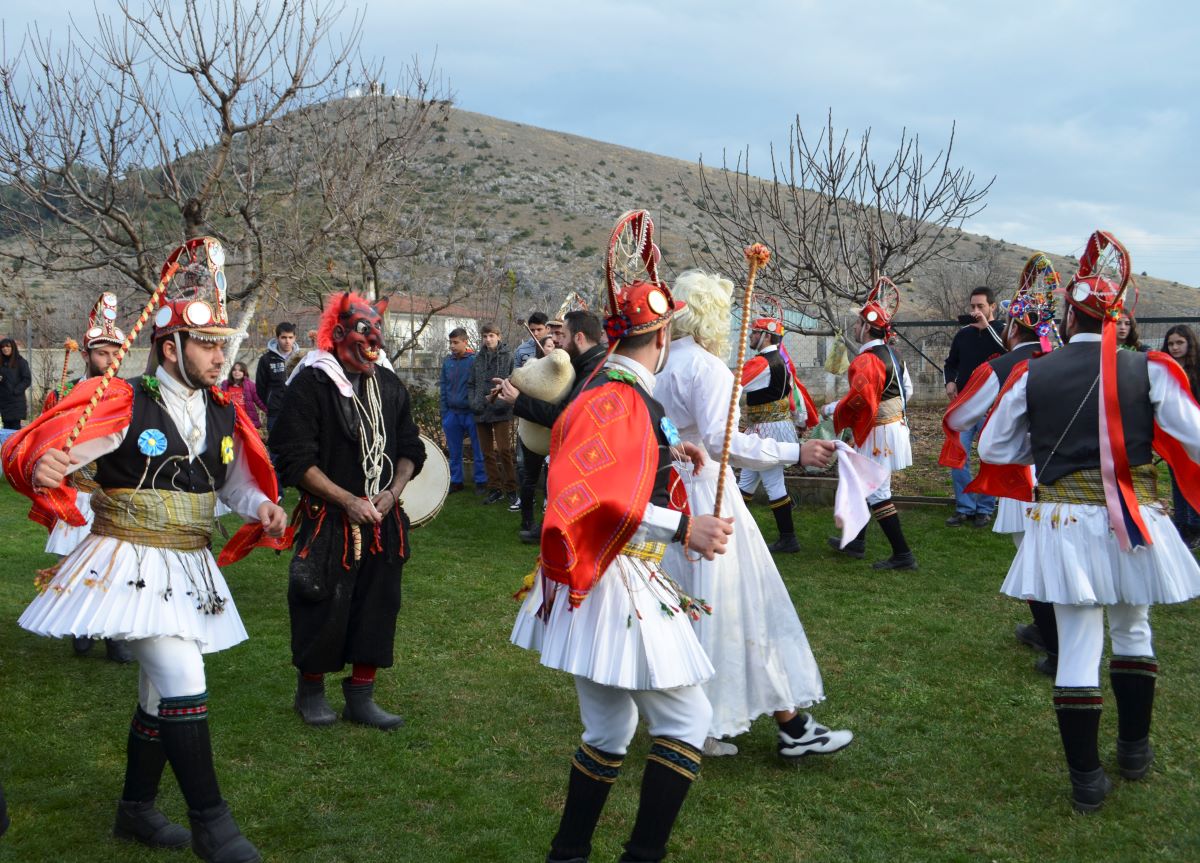 Momoeri dance in a village house yard, with the 'bride' is 'protected' in the middle of their circle, where 'the devil' is also lurking, Tetralofos village © Kostas Alexandridis