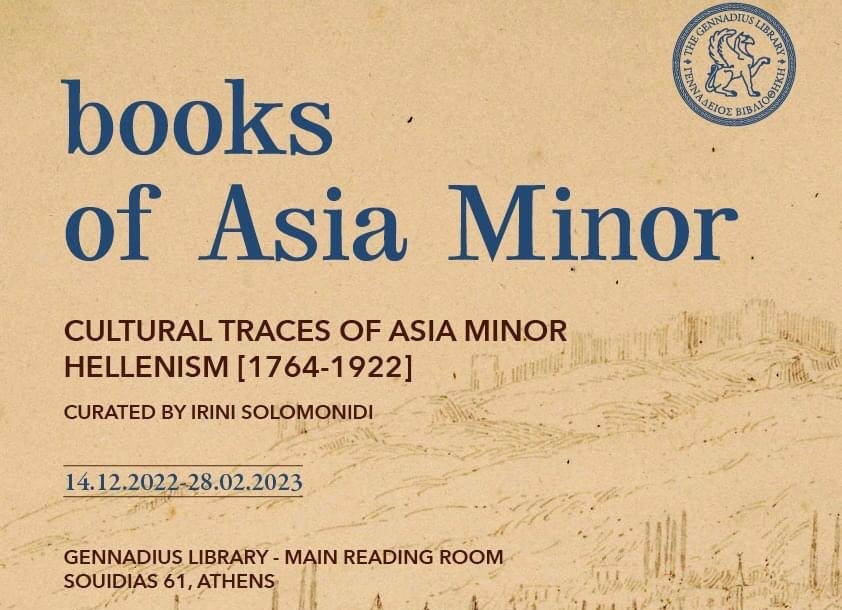 The Gennadius Library and the American School of Classical Studies at Athens present the exhibition Books of Asia Minor. Cultural Traces of Asia Minor Hellenism [1764-1922]. Seventy of the most important specimens of Asia Minor editions, manuscripts, and documents from the Gennadius library collections will be showcased until February 28, 2023.

Asia Minor used to be home to numerous large Greek communities; the history of Hellenism in the area goes back as early as the 9th century BC, with the establishment of Aeolian, Ionian and Dorian colonies. Greeks maintained a strong presence in Anatolia, which was even more felt following the establishment of the Hellenistic kingdoms and, later, the Byzantine Empire, which was centred around Constantinople.

Even after the entire Greek world became part of the Ottoman Empire, the Greek population continued to form an integral part of the area’s cultural profile, and the Christian communities of Constantinople, Smyrna, Ayvalik and other Anatolian cities and villages were often more vibrant and prosperous compared to population of the Greek mainland. 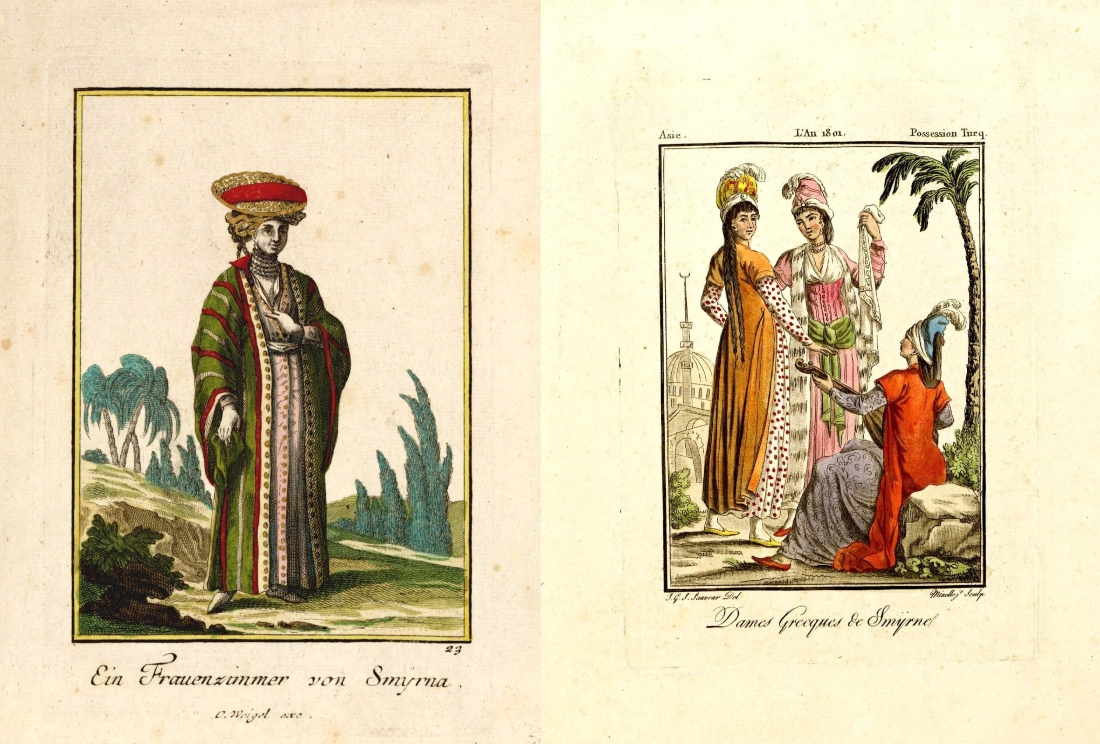 Women of Smyrna from Scrapbooks of Joannes Gennadius

In the beginning of the 20th century, these Greek communities experienced a period of great flourishing, soon to be followed by persecutions, first due to the outbreak of World War I (where Greece and the Ottoman Empire fought on opposing sides) and then due to the Greco-Turkish War of 1919-1922. This culminated in the destruction of the city of Smyrna on 14 September 1922 which resulted in a massive exodus; the population exchanges stipulated by the Lausanne Peace Treaty of 1923 caused even more Greek refugees to arrive to Greece.

The exhibition Books of Asia Minor opens with a presentation of the land and multicultural population of Asia Minor, through maps, historical and geographical books of the 19th century, rare Karamanli and Francochiot publications, as well as dictionaries (in the balcony of the Gennadius Library). Recently acquired historical testimonials complement the panorama: the manuscript notebook of a teacher who studied at the School of Kydonies, the scrapbook of a teenager from Smyrna, the diary of a soldier of the Asia Minor Campaign, and a scrapbook with photos from the Catastrophe of Smyrna, compiled by film director Elia Kazan. 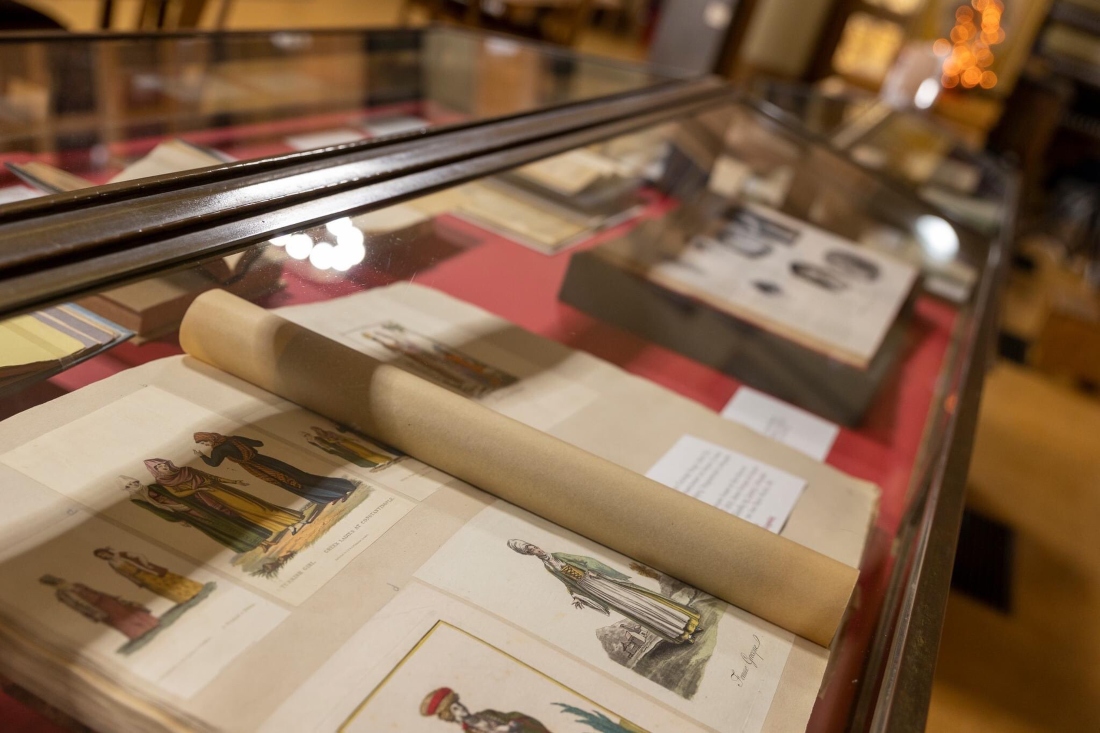 Editions from the School of Kydonies at the time of the Greek Revolution of 1821, regulations of the schools of Smyrna, alphabet books, and textbooks demonstrate intense educational activities. Liturgical and theological books, the earliest one being the Akolouthia of Saint Simeon, the first book printed in Smyrna in 1764, bear witness to the intense religious activity of the Greek Orthodox populations of Asia Minor.

A wide range of novels or theatrical plays attest to a strong cultural interest in literature. The Neos Erotokritos by Dionysios Foteinos, works of the Phanariot Panagiotis Soutsos, and anthologies of poetry stand out. Numerous novels or plays were translated into Greek, from the French (Moliere, Montesquieu, Lamartine, Voltaire etc.) or the Russian (Dostoyevsky). Even Karamanli literary publications were in circulation. 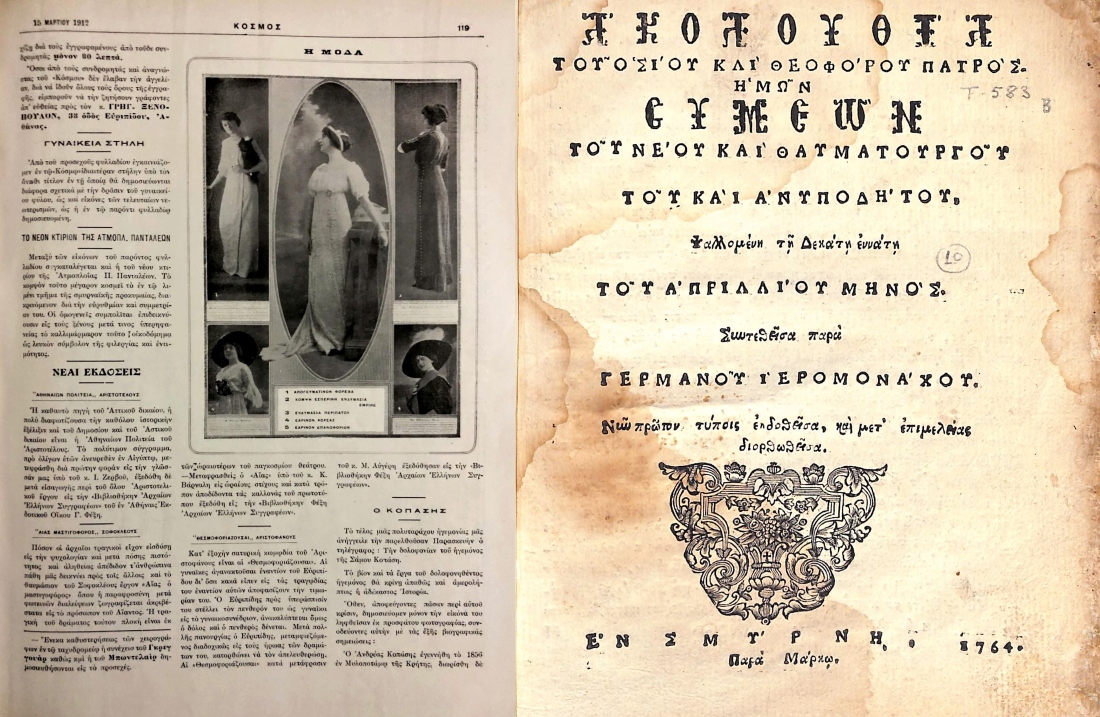 Rich material on the edification of women, moral or otherwise, ushered by the translation of Jean Nicolas Bouilly’s Conseils à ma fille (Advice to my daughter) by the female scholar Evanthia Kairis, along with the periodical press of early 20th century Smyrna, showcase the changing social position of women and the move to modernity.

The exhibition curated by Irini Solomonidi, Senior Librarian of the Gennadius Library

Read also via Greek News Agenda: "The Epic of Anatolia in the Greek Imagination" at ASCSA