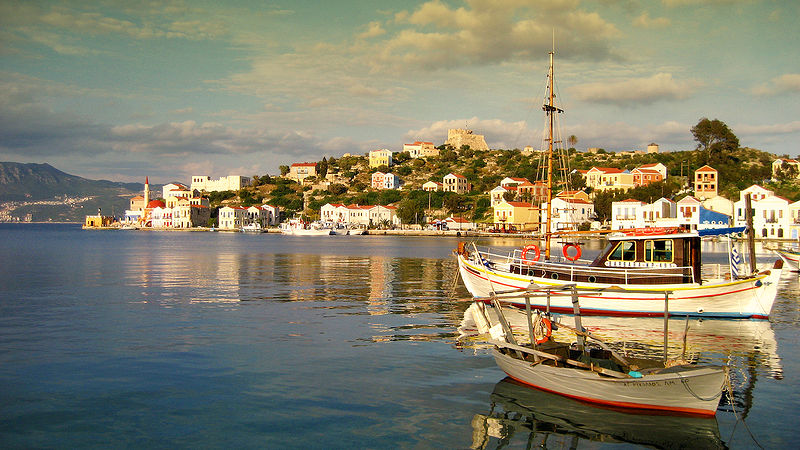 Kastellorizo (alternatively spelled Castellorizo, and officially named to as Meyisti/Megisti) is the island furthest from the Greek mainland. It forms part of the Dodecanese archipelago, located on the eastern edge of the Aegean Sea, where it meets the Levantine Sea. Despite being a small, remote island, it has a lot to offer, especially in terms of natural beauty paired with a rich history.

Kastellorizo is the smallest of the archipelago’s 12 major islands -it should be noted that Dodecanisa actually signifies "(group of) twelve islands"- and, in fact, smaller even than some of those considered among the archipelago’s "minor" islands, such as Chalki, Leipsoi and Agathonisi; its original Greek name, however, means “largest/greatest” (megisti is the female superlative of megas "big"). This is probably because it is the largest of the smaller group of islands in its vicinity; this includes Ro, Strongyli and a number of smaller islets.

Although Megisti remains its official administrative name, the island is mostly referred to as Kastellorizo, a name of Italian origin. The first part of its name derives from castello, the Italian word for castle, due to the existence of a castle of the Knights Hospitaller. The second part is generally considered to come from rosso, meaning red – the island’s name is, in fact, Castelrosso. There are however other theories; the island is identified as Castel Ruggio in some old maps and depictions. Some theories link it with the word Rhoge, the ancient name for the nearby islet of Ro, while the historian I.M. Hatzifotis claimed that his research proves it originates from the Greek rizovouni "foothill", since the town was founded at the base of the mountain where the castle stands. 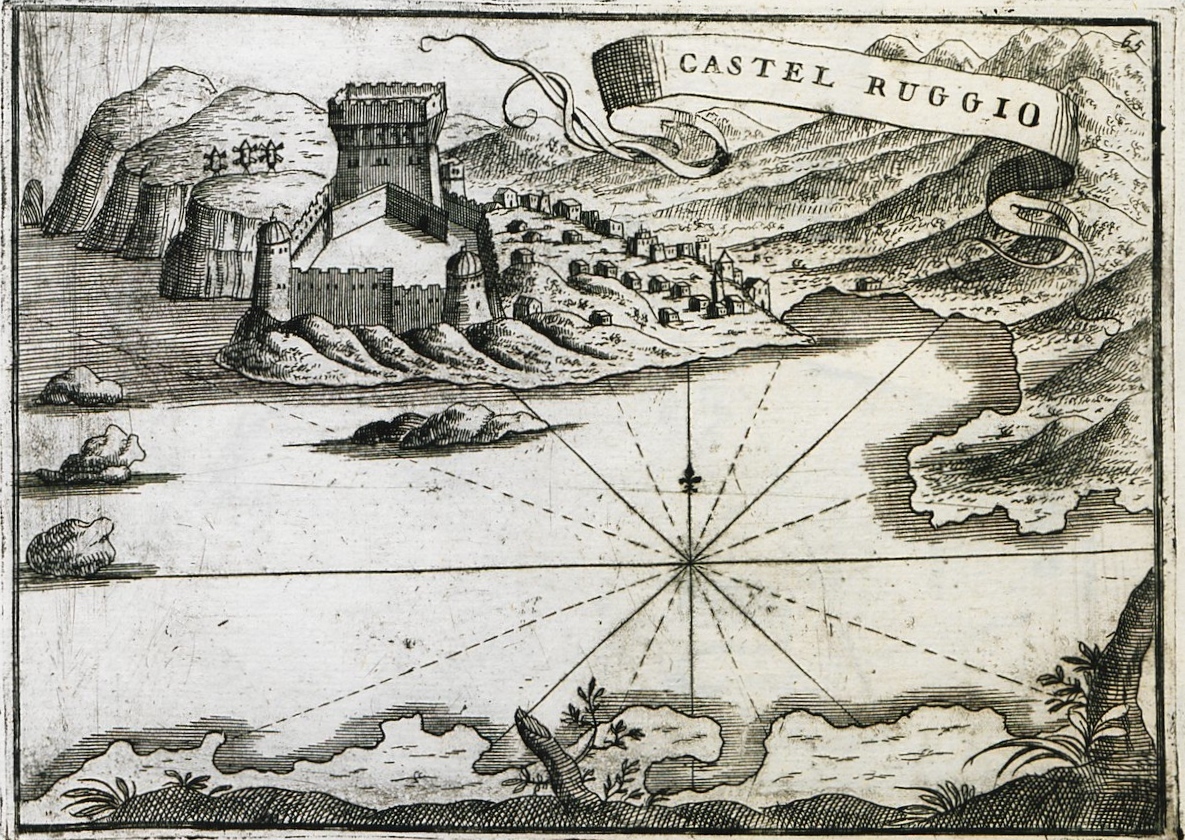 The island was populated since the Neolithic period, and belonged to the historical region of Lycia; colonised by Dorian Greeks, it was named Megisti. During the Hellenistic period, it formed part of the Rhodian Peraia, a region controlled and colonised by the nearby island of Rhodes. It later formed part of Alexander’s empire, and then the Roman Empire, serving as a base for the Roman fleet in its campaigns against Cilician pirates. During the Byzantine era, it was included in the Theme of the Cibyrrhaeots.

In 1306, the island was taken over by the Order of Knights of the Hospital of Saint John of Jerusalem (usually referred to as Knights Hospitaller), a Catholic military order who arose in Jerusalem in the early 11th c. The conquest formed part of their expedition to conquer the island of Rhodes, led by Grand Master Foulques de Villaret; Rhodes eventually fell to them, becoming the centre of a crusader state which encompassed Kastellorizo. The Hospitallers -often referred to as the Knights of Rhodes- used the island mainly as a place of banishment; to this end, they built a prison-castle at the entrance of the port, on the foundation of an ancient fortress of the Doric era. This is generally believed to have given the island its current common name, due to the reddish hue of the rocks where the castle stands.

In the 1440s the island was destroyed by the navy of the Mamluk Sultanate of Egypt, while in 1461 it was seized by the Aragonese, who annexed it to the dependent kingdom of Naples, and rebuilt the castle destroyed by the mamluks. In the 1510s, Kastellorizo fell under Ottoman rule, and remained so until the early 20th century, except for brief intervals during the Siege of Candia, the Russo-Turkish War of 1787–1792 and the Greek War of Independence.

In 1913, following the Libyan war between Italy and the Ottoman Empire, the locals imprisoned the Ottoman governor and his garrison and proclaimed a provisional government; the island remained autonomous until it was restituted to the Ottoman Empire in early 1914. In 1915, during WWI -while the Greek Kingdom was still neutral- the French navy occupied the island to use it as a naval base. The island was ceded to Italy under the treaties of Sèvres (1920) and Lausanne (1923) and integrated in the Italian Islands of the Aegean, where the rest of the Dodecanese already belonged.

After the Italian capitulation of September 1943, the island was occupied by Allied forces, and it remained under their occupation for the rest of the war. In 1947, Kastellorizo was assigned to Greece under the Paris Peace Treaties; it formally joined the Greek State on 7 March 1948 along with the other Dodecanese islands. The Italian film Mediterraneo, winner of the 1992 Academy Award for best foreign film, was inspired by the island’s history during WWII.

Kastellorizo is particularly known for its fortresses. The ancient fortified acropolis, known as Palaiokastro "old castle", is located west of the town, on the island’s highest summit called Vigla. It was erected by Dorian Greeks, and bears on its base an inscription, dating back to the 4th or 3rd centuries BC, referencing the name Megisti. Within the ancient ruins there are cisterns and parts of the fortifications, as well as the remains of churches of the meso-Byzantine period. Close to this site there are also the remains of older Cyclopean walls. 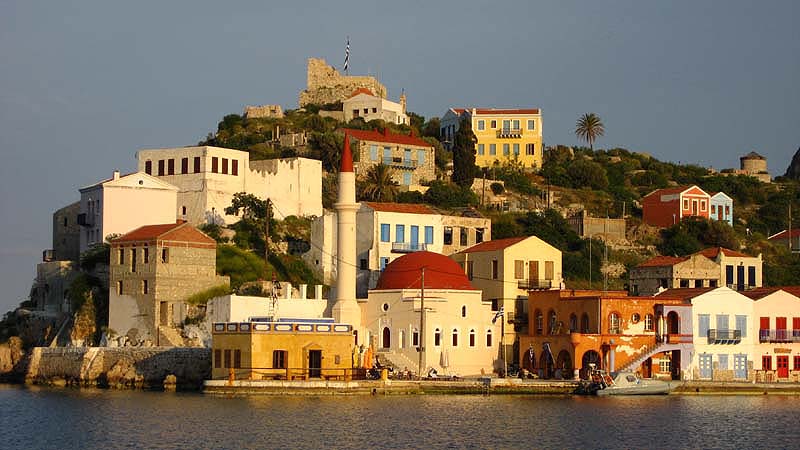 On the eastern side there stands the Castle of the Knights which is said to have given the island its name. Originally built in the 14thcentury by the Knights Hospitaller on the foundation of another ancient Doric fortress, it was subsequently destroyed and rebuilt several times. The current site consists of the remains of 15th-century reconstruction. It consists of a big central tower at the top of the rock and, at a lower level, a fortified courtyard protected by a bastion.

A Lycian rock-cut tomb, dating to the 4th century BC, with its Doric facade carved out of the rockface is located in a niche on the rock directly below the Castle of the Knights. is the only one in Greece. The facade, typical of such tombs, is described as Doric because it resembles the columns and roof of Greek Doric temples. This is the only tomb of its kind that has been found in Greece.

The central square of the Horafia neighbourhood is by the Church of St. George (1906), with a high dome of Byzantine type, the Cathedral of Saints Constantine and Helena (1835) and the Church of St. Spyridon (19th c.). The island's former Ottoman mosque, which dates from the second half of the 18th century, has been restored and re-opened as a museum showcasing the island’s historical records.

Since 2016, the island has been hosting the International Documentary Festival "Beyond Borders", held by the Hellenic History Foundation. The weeklong yearly festival features films dealing with historical, cross-cultural issues, and offers various side-events. This year’s edition, held under the auspices of the General Secretariat for Greeks Abroad of the Ministry of Foreign Affairs, will take place on 23-30 August 2020. 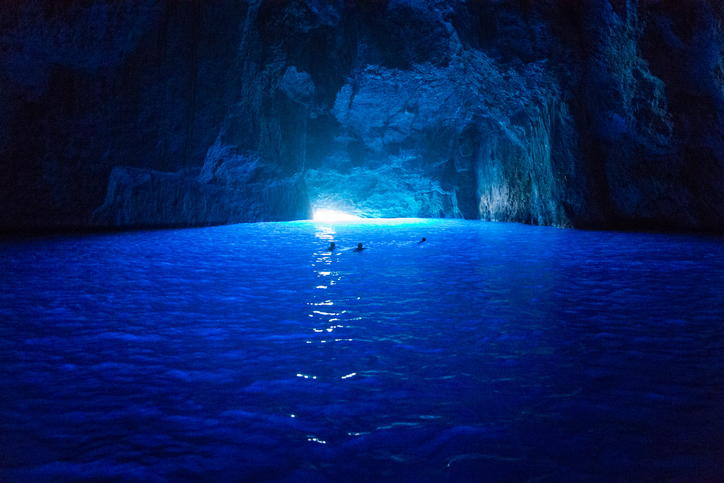 Kastellorizo’s main tourist attraction is arguably the sea cave often referred to as "Blue Grotto"; it original Greek name was Phokiali, meaning "seal's refuge". It is located on the southeast coast of the island, it consists of two interconnected halls and can only be visited by boat. At 40–50 m long, 25–30 m wide, and 20–25 m high, it is much larger than the world famous Grotta Azzurra on Capri, Italy. The sunlight’s reflection on the walls of the cave produces a vibrant blue colour.

The Municipality of Megisti also includes the islets of Ro and Strongyli . The former carries ruins of fortifications from the Hellenistic period; it has been uninhabited for most of its modern history, except for one Greek woman known as the Lady of Ro, who died in 1982. The latter, whose name means "the round one", is the easternmost part of Greece, and has no permanent residents.