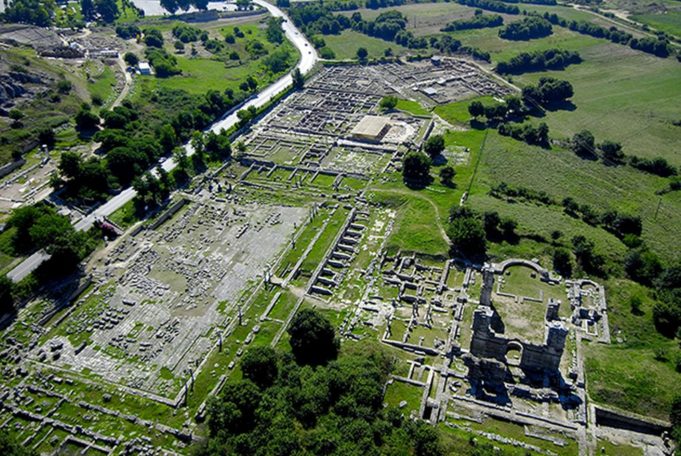 Not far from the city of Kavala in Macedonia, you can find one of the most important archaeological sites in Greece: the ruins of the ancient city of Philippi, part of the UNESCO World Heritage List since 2016.

Throughout its centuries-old history, the city has been associated with historical figures and events that shaped the Western world, including Macedonian kings, Roman politicians and generals, and one of the most influential apostles of Christianity; a crossroads of cultures and civilisations, it has been the theatre of one of the most crucial battles of antiquity and the site of the first Christian baptism in Europe.

The History of the city of Philippi

The ruins of Philippi are located about 13 km north-west of Kavala. The city was originally founded in 360 BC under the name Krenides (meaning "springs"),by settlers from the island of Thassos. After only four years, however, the city was conquered by King Philip II of Macedon, father of Alexander the Great, who renamed the city after him; recognising its economic and strategic potential -due to its position on the great royal route which runs east-west across Macedonia, and to the neighbouring gold mines- Philip enlarged and fortified the city. Among the archaeological finds that date to this era are the remains of the original city walls, a theatre and a heroön.

During the Third Macedonian War (171-168 B.C.), which marked the end of Hellenistic Macedonia, Philippi was conquered by the Romans, who divided the kingdom into four separate states; the city formed part of the eastern Macedonian state. Due to its position on the route that ran across Macedonia, reconstructed by the Romansin the 2nd century BC as part of the Via Egnatia, Philippi attained major importance, as evidenced by numerous Latin inscriptions and illustrated by the magnitude of the monuments constructed in that era, especially in relation to the city’s moderate size; a vast roman forum was constructed and expanded in various phases, while the theatre was enlarged and modified to host public games. 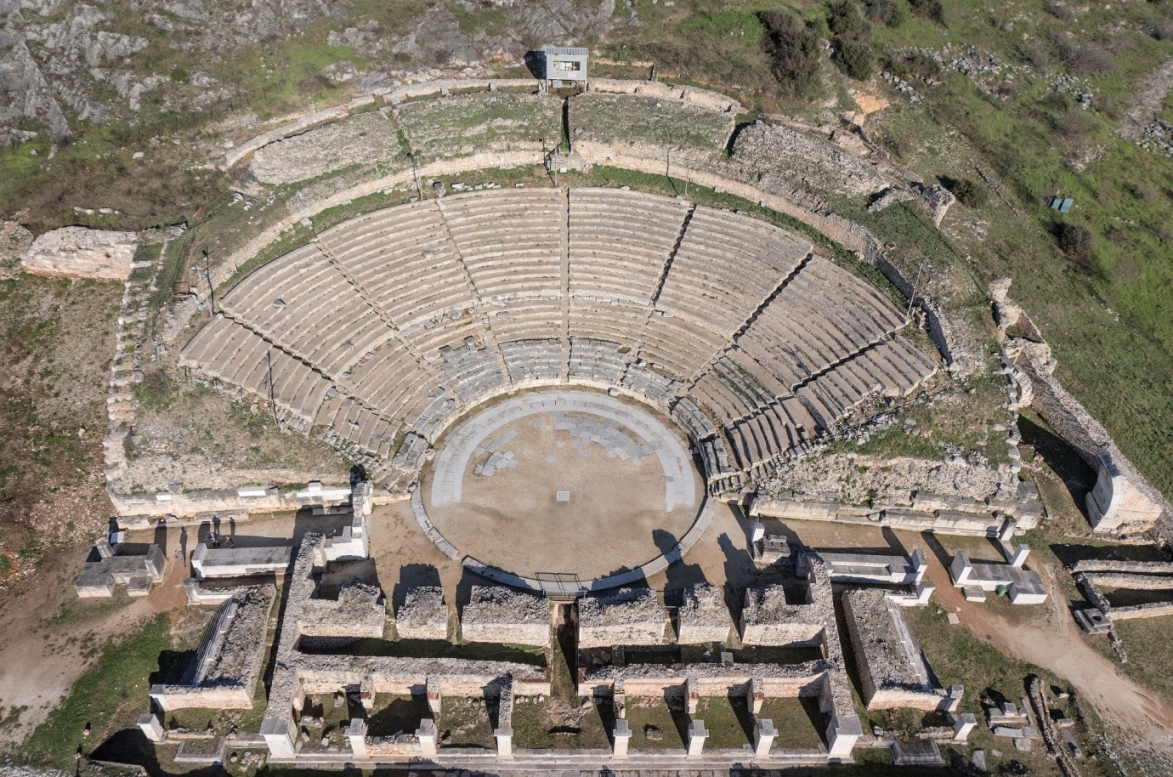 The ancient Theatre of Philippi (©Hellenic Ministry of Culture and Sports)

It was here that one of the most decisive battles of antiquity took place, in October 42 BC: following the assassination of Caesar, his heirs Mark Antony and Octavian (of the Second Triumvirate) confronted the forces of Marcus Junius Brutus and Gaius Cassius Longinus, outside the western walls of the city. The Battle of Philippi, part of the long series of civil wars that upset Rome during the first century B.C., ended in victory for the Second Triumvirate and consolidated their control over the territory of the Roman Republic, setting into motion the course of events that would eventually lead to the end of the Republic and the establishment of the Roman Empire.

After the battle, Brutus committed suicide, demoralised by the defeat. In Parallel Lives, Plutarch describes a ghostly apparition of Caesar to Brutus, where he warns his murderer "thou shalt see me at Philippi"; William Shakespeare reprises this phrase in his play Julius Caesar. In Italian, "i’ll be seeing you in Philippi (ci rivedremo a Filippi)" is in fact a common phrase loosely translating to "you're gonna get yours".

Following their victory, Octavian and Antony released some of their veteran soldiers to colonise the city, which was refounded as Colonia Victrix Philippensium. After Octavian was proclaimed as Emperor Augustus (27 BC) he reorganised the colony under the name Colonia Augusta Iulia Philippensis, establishing more settlers; the territory of Philippi was centuriated (divided into squares of land) and distributed to the colonists. It was at that time that the Roman forum was constructed, east of the site of the original Greek agora. The city was transformed into a "little Rome", administratively modeled on the empire’s capital, and governed by two military officers, the duumviri, who were appointed directly from Rome. 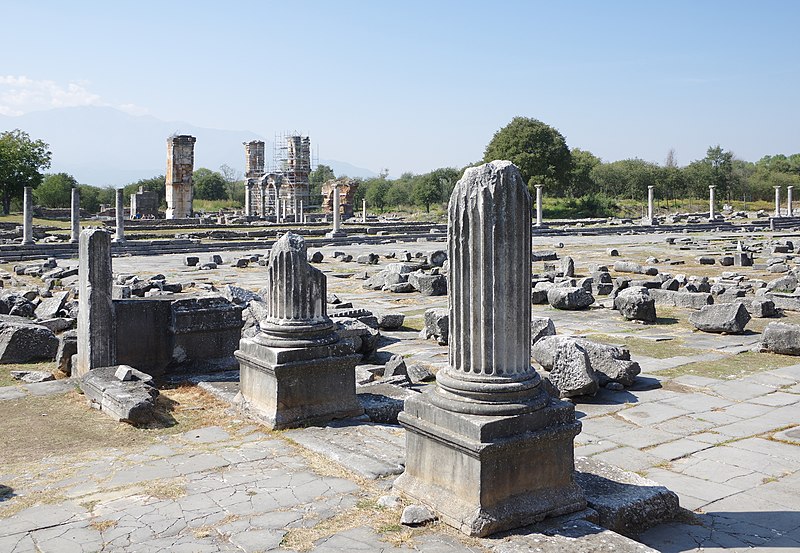 The Roman forum at Philippi (by Berthold Werner via Wikimedia Commons)

According to the New Testament, the Apostle Paul visited Philippi during his second missionary journey, in around 49-50 A.D.; he is believed to have preached for the first time on European soil in Philippi. According to the Acts of the Apostles, a woman named Lydia offered to host Paul and his companions in her house in Philippi, after she and her household were baptised; she is regarded as the first documented convert to Christianity in Europe. Paul would revisit the city in the following years, and also addressed to the city’s congregation one of his most famous epistles (Epistle to the Philippians, 61-62 AD).

As the seat of the first Christian community in Europe, the city gained additional prestige in the emerging Christian world. Between the 4th and 5th centuries A.D., the face of the city changed, adapting to its new status, with the erection of three majestic churches, including Octagonal Basilica, the cathedral consecrated to St. Paul. Philippi continued to flourish as part of the Byzantine Empire until the beginning of the 7th century; already weakened by Slavic invasions, the city was almost completely abandoned after a catastrophic earthquake that took place around 619 AD. In the following years the city served as a Byzantine garrison, but at some point after the Ottoman conquest the site was completely deserted.

On 15 July 2016, the archaeological site of Philippi was inscribed on UNESCO’s World Heritage List.

The monuments of the archaeological site of Philippi

Because of its rich and centuries-old history, the archaeological site of Philippi offers visitors an insight into Greek, Roman and Byzantine art and architecture. Among the archaeological finds brought to light during the excavations carried out in the area include parts of the walls erected by Philip II, the acropolis, the theatre, the Roman forum, Basilica A, Basilica B and the Octagonal Basilica. 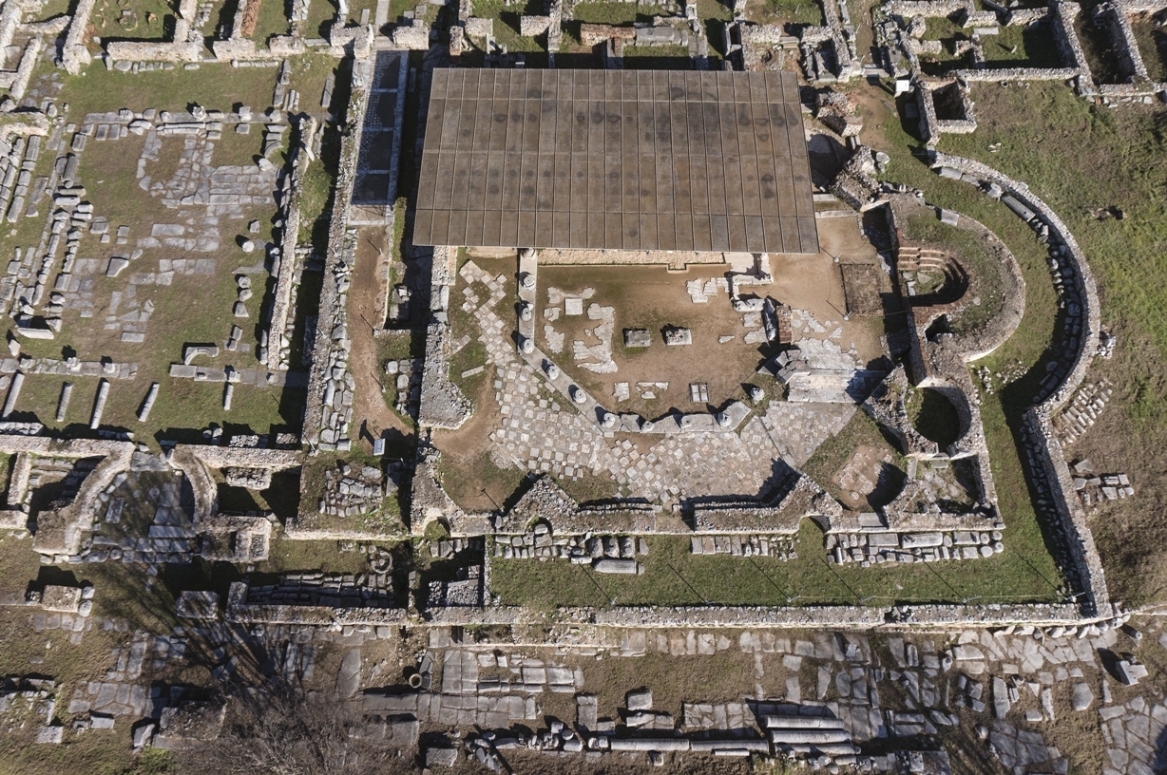 Arguably, the most impressive building of the Hellenistic period in the city is the Ancient Theatre of Philippi, which was probably built by King Philip II in mid-4th century B.C., and subsequently remodelled several times to host Roman games. Near it there is also a Roman shrine to Silvanus and one dedicated to Egyptian divinities.

The Roman forum, dating to the Antonine period of the 2nd century A.D., which served as the religious, commercial, administrative and cultural centre of the city in the Roman era, was a complex of public structures arranged around a central square. The large paved road that runs along its northern side has in fact been identified as the ancient Via Egnatia, the Decumanus Maximus of the Roman colony.

The early Christian monuments of Philippi are among the best preserved examples of religious architecture of their kind; built between the 4th and 6th centuries AD, often on top of Roman public or private buildings, they include two grandiose basilicas (A & B) and the ecclesiastical complex of the Octagonal Basilica. 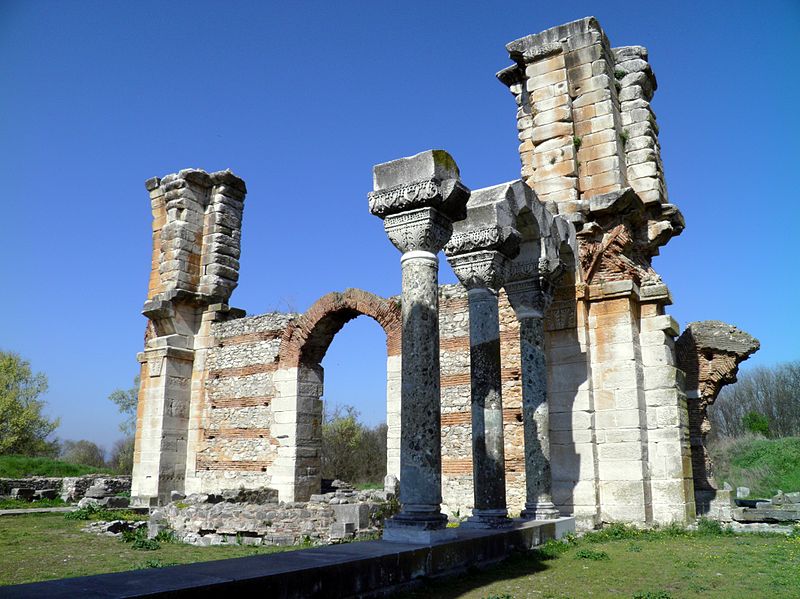 The Basilica B, Philippi (by Carole Raddato via Wikimedia Commons)

130 metres long and 50 metres wide, the Basilica identified as "A" (end of the 5th century AD) is a large basilica with three naves, with fragments of the lavish paving and part of the ambon still preserved in its central nave.

Basilica B (ca. 550 A.D.), also a three-nave basilica, has a central nave of almost square shape, which at one time was covered by a dome supported by large pillars.

The complex of the Octagonal Basilica is centred around the octagonal cathedral dedicated to the Apostle Paul, which was built in three phases, and also includes the two-storey "Bishop's Palace", as well as a phiale (liturgical fountain), a baptistery and a monumental gate towards Via Egnatia.

Originally published on Punto Grecia by S. Dimitriadis. Translated into English by N. Mosaidi. (Intro photo: Panoramic view of the archaeological site of Philippi via ERT)

Also read via Greek News Agenda: Vravron and the cult of Artemis; Secret treasures of Greece - Sapientza; The ancient city of Oeniadae; Pavlopetri: The Oldest Submerged City in the World