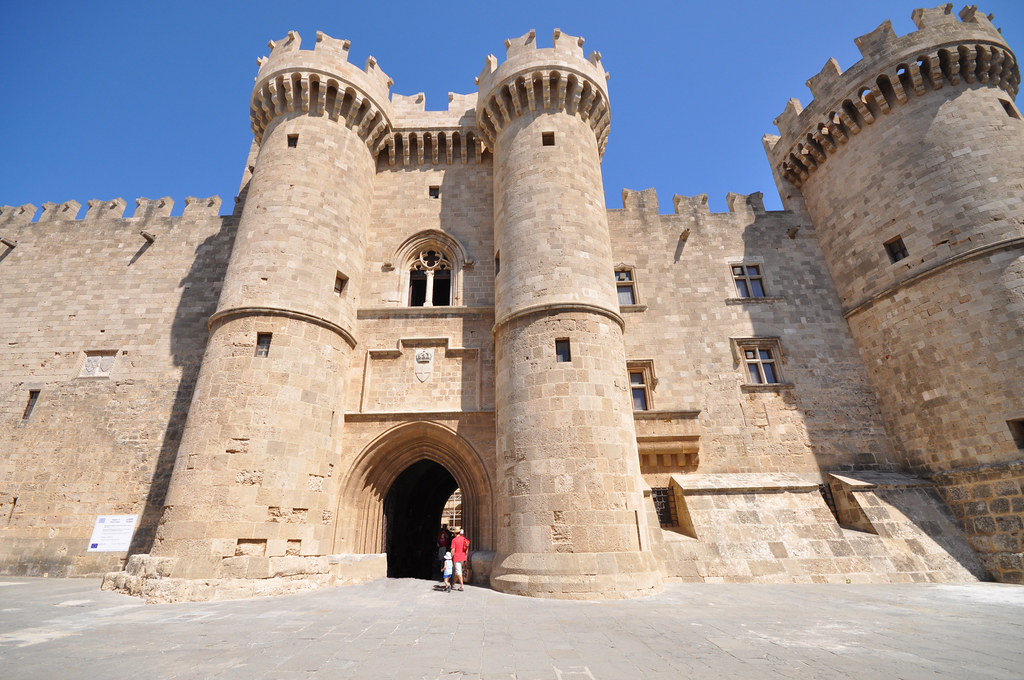 Rhodes, the largest island of the Dodecanese, boasts an impressive medieval city at the heart of its capital; it is one of the best-preserved medieval towns in Europe, and its cobbled streets take visitors to a journey through time. Its imposing architecture is testimony to a rich heritage and to the events that have marked its history. For its outstanding universal value, it has been part of the UNESCO World Heritage List since 1988.

The island of Rhodes has been inhabited since the Neolithic period; it became part of the Minoan and then the Mycenean Civilisation, and later occupied by the Dorians, who established three separate communities on the island. During the Classical Era, it formed part of the Delian League, but gradually distance itself from it; in 408 BC, the three communities (from the cities of Lindos, Ialyssos and Kameiros) united and founded the city of Rhodes. 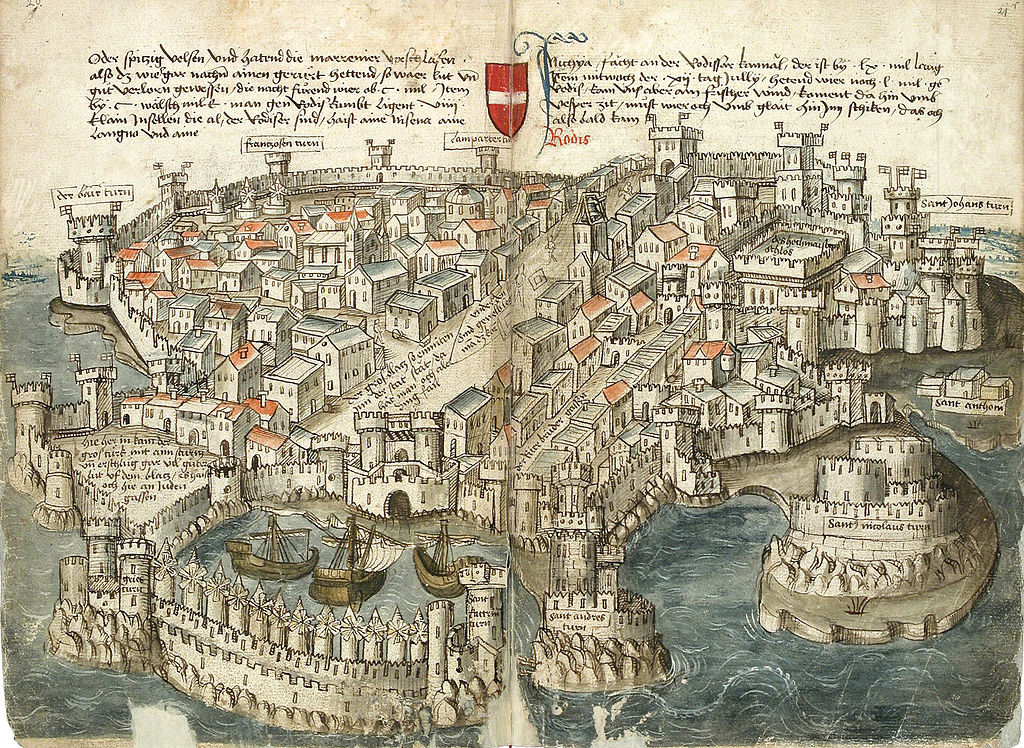 The city of Rhodes from a Conrad Grünenberg book illustration (1487)

The island became part of Alexander’s empire, but later gained its autonomy during the Hellenistic times. The city of Rhodes developed into a maritime, commercial and cultural centre, famous, among else, for a statue of sun-god Helios which stood there for 66 years – the legendary Colossus of Rhodes, one of the Seven Wonders of the Ancient World. During Roman times, the island eventually surrendered its independence and later became the capital of the Roman province of the Islands. Then, as part of the Eastern Roman Empire, it remained a shipping and commercial centre, but also suffered a series of attacks and was over time occupied by several different forces (Persians, Arabs, Turks and Genoese).

However, the forces that arguably left their mark on the island, especially the city of Rhodes, more than any other, were those of the Order of Knights of the Hospital of Saint John of Jerusalem, usually referred to as the Knights Hospitaller, and –especially in Greece– as "the Knights of Rhodes", who conquered the island in 1306–1310, after they were driven out of the Holy Land. The Knights turned the capital into a stronghold that could hold out against major sieges, like the one led by the Sultan of Egypt in 1444, and by Mehmed the Conqueror in 1480. The armies of Suleiman the Magnificent would finally conquer the island in 1522. 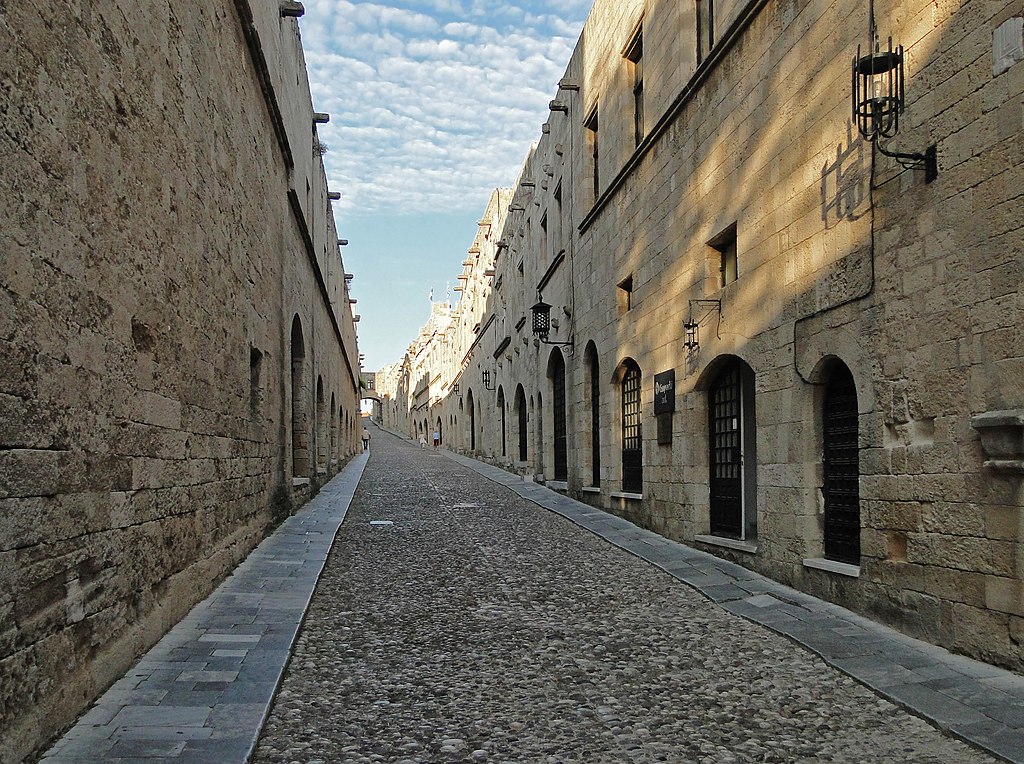 After nearly four centuries of Ottoman rule, Rhodes was captured by the Italians in 1912, during the Italo-Turkish War; since 1929, they conducted extensive conservation works on the fortifications and monuments. The islands of the Dodecanese, including Rhodes, were finally ceded to Greece by the peace treaty of 1947. In 1960 the old city of Rhodes was officially designated as a monument of cultural heritage by the Greek Ministry of Culture, and restoration works began under the auspices of the Ministry. In 1988, the medieval city was inscribed on the UNESCO World Heritage List. In addition, Rhodes has been a member of Organization of World Heritage Cities since it was founded in 1993. 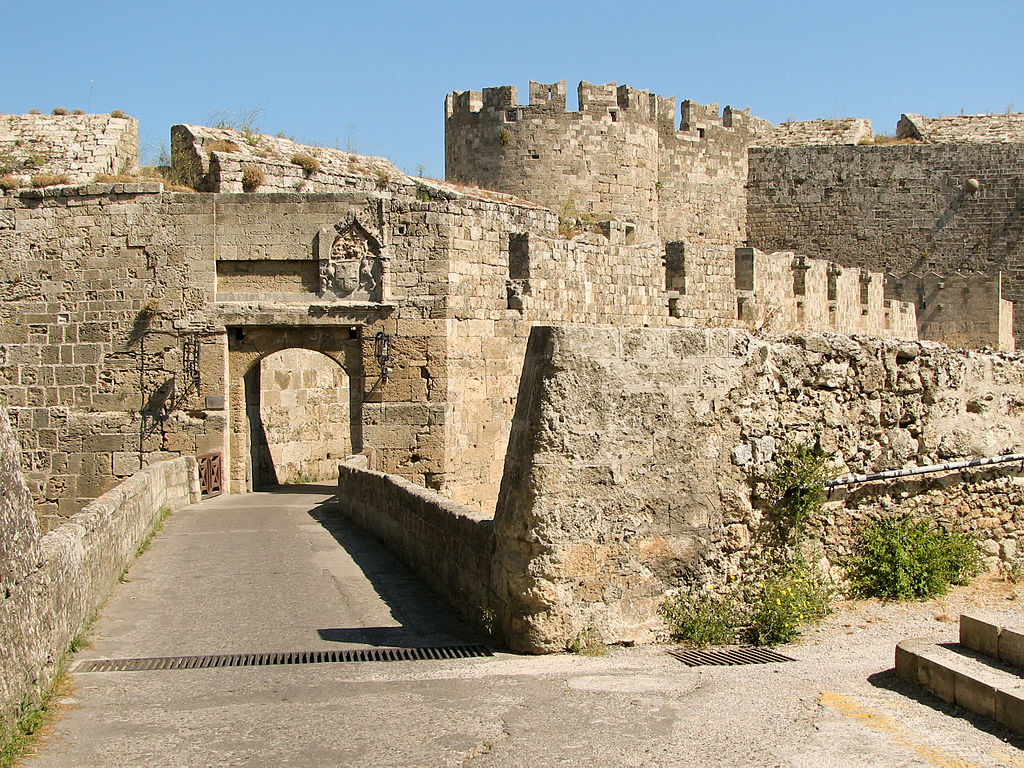 The medieval city is enclosed by a 4 km-long wall. It consists of two parts, the Upper Town in the north and the Lower Town in the southwest. The Upper Town, originally separated from the Lower Town by a fortified wall, was built entirely by the Knights. The Order was organised in seven langues ("languages"), that is, ethno-linguistic administrative divisions, each with its own headquarters or auberge. The auberges of the armies of Italy, France, Spain and Provence lined the main east-west axis, the famous Street of the Knights, one of the finest examples of Gothic town planning.

The most impressive building of the area is the majestic Palace of the Grand Master, on the highest point of the citadel, to the north. Unfortunately, the original palace was in great part ruined by an explosion in 1856; the surviving building dates largely to a reconstruction of 1937-1940 by Italian architect Vittorio Mesturino . Also on the northern side, near the original Hospice of the Knights, is the Auvergne auberge, whose façade bears the coat of arms of Guy de Blanchefort, Grand Master from 1512 to 1513. The first hospice was replaced in the 15th century by a hospital –now known as the Knights’ Hospital, and currently housing the Archaeological Museum of Rhodes– built between 1440 and 1489 on the south side of the Street of the Knights. 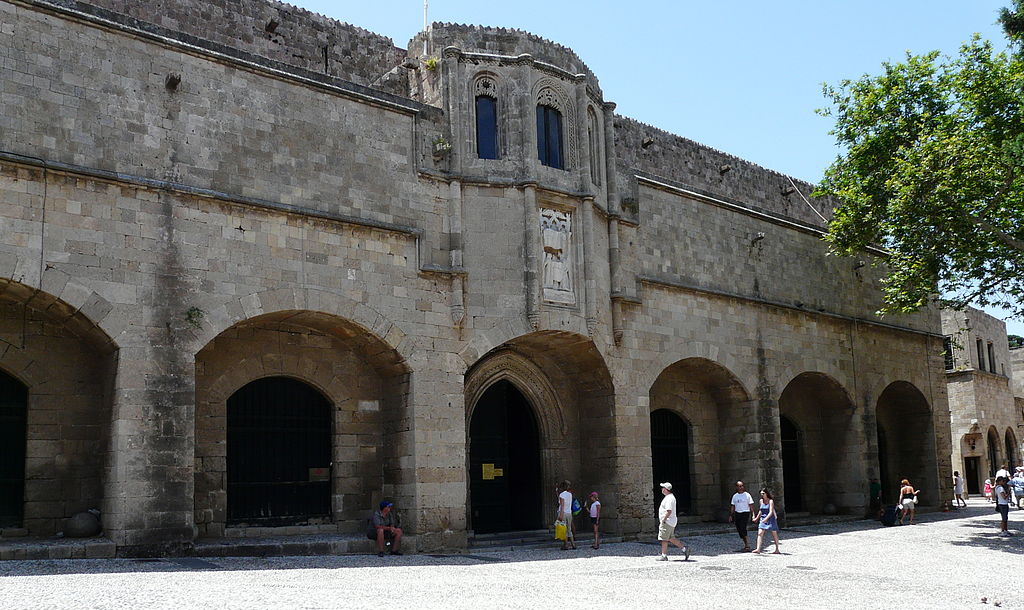 The Lower Town is equally filled with monuments; by 1522, when its population had reached 5,000, many churches had been constructed there, some of them in Byzantine style. Over the years, the number of mansions and charitable institutions in the south-east increased, including majestic buildings such as the Castellania (the Knights’ Commercial Court – now a municipal library), the Archbishop's Palace, the Hospice of St Catherine and many others were built.

Having also been part of the Ottoman Empire for a long time, Rhodes is also home to several important Islamic monuments such as mosques, baths and residences. After 1523, most churches were converted into Islamic mosques, such as the Mosque of Suleiman, Kavakli Mestchiti, Demirli Djami, Peial ed Din Djami, Abdul Djelil Djami and Dolapli Mestchiti. 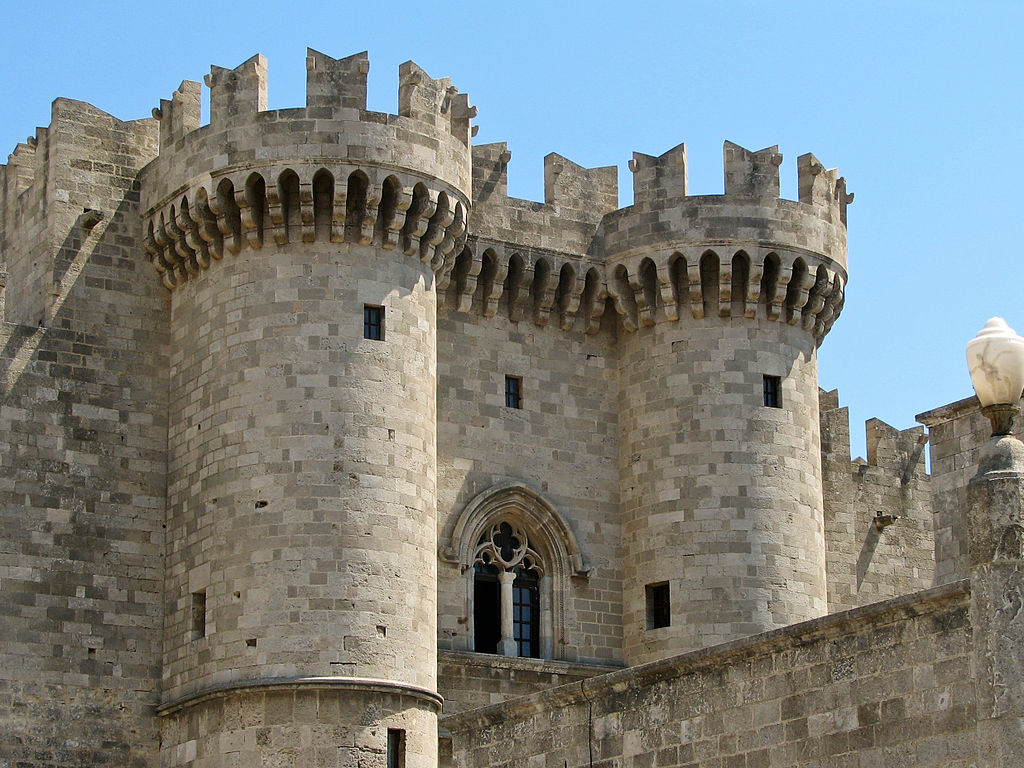 View of the Palace of the Grand Master (by Norbert Nagel, Mörfelden-Walldorf, Germany via Wikimedia Commons)

The medieval city’s walls, partly built on the foundations of the Byzantine fortifications, were continuously updated and reconstructed under the Grand Masters between the 14th and 16th centuries. Considered impregnable for a long time, they are among the most impressive medieval ramparts in Europe and, according to UNESCO, they "exerted an influence throughout the eastern Mediterranean basin at the end of the Middle Ages ".

Citing the reasons for the site’s inclusion in the World Heritage List, UNESCO points to its value as a landmark bearing evidence from the history of the military/hospital order founded during the Crusades, as well as its significance as "one of the most beautiful urban ensembles of the Gothic period" on a Greek island with a rich and glorious past. Another important criterion is the existence of both Frankish and Ottoman buildings in the old town, which makes it "an important ensemble of traditional human settlement, characterised by successive and complex phenomena of acculturation". 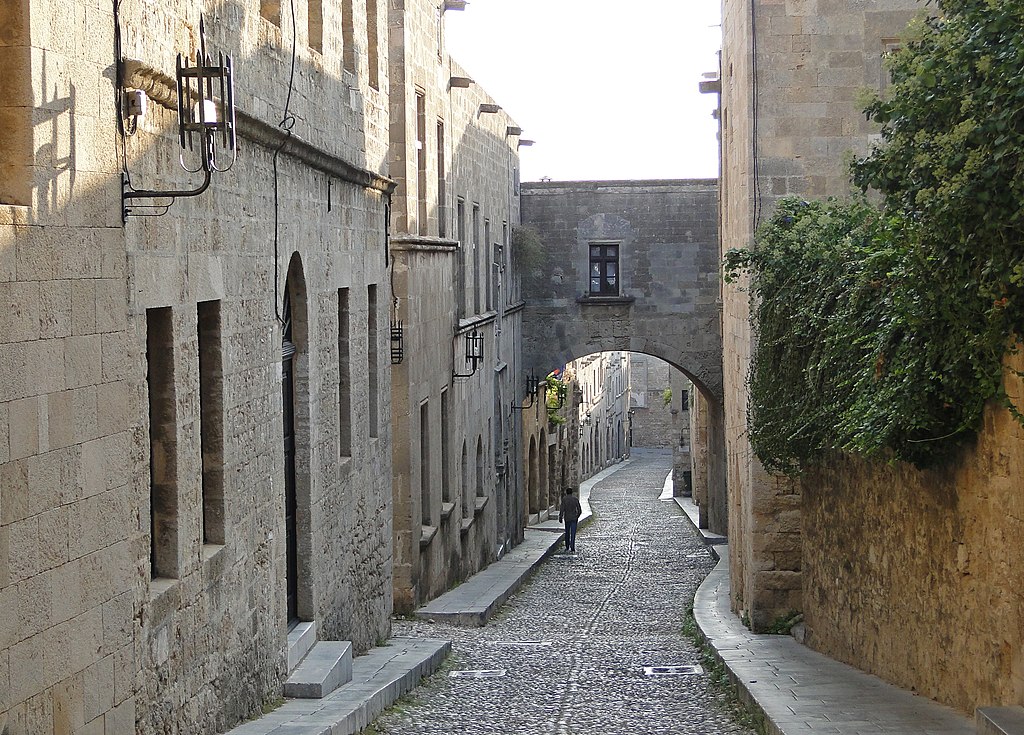 The Street of the Knights (by Bernard Gagnon via Wikimedia Commons)

The medieval city of Rhodes is a year-round destination, but it is also a great starting point to discover the rest of Rhodes, which does not only feature many beautiful beaches, picturesque villages and the unique nature reserve of the Valley of Butterflies, but is also home to other historical landmarks, such as the archaeological sites in the aforementioned towns of Lindos, Ialyssos and Kameiros, the first cities founded on the island.

Ν.Μ. (Based on an article originally published in Griechenland Aktuell. Intro image: An entrance to the Palace of the Grand Master [by Jorge Láscar via flickr])

Read also via Greek News Agenda: Kastellorizo: Greece's remotest island; The castles of Methoni and Koroni; The medieval ghost town of Mystras; Mountainous Arcadia: A ‘mythical’ destination in the Peloponnese