Ancient Olympia: Panhellenic Sanctuary and home of the Olympics 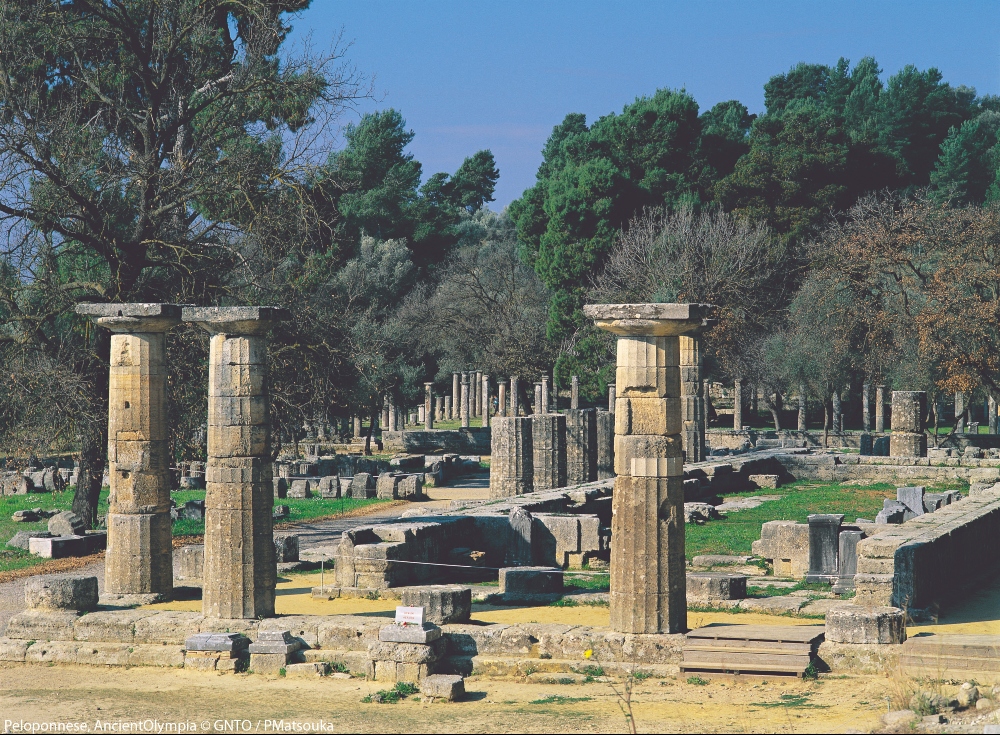 Ancient Olympia is one of Greece’s most important archaeological sites. Once a sanctuary of nationwide importance, it now has an international reputation as both the site of one of the Seven Wonders of the Ancient World and the birthplace of its namesake athletic festival, the Olympic Games. Olympia was inscribed on UNESCO’s World Heritage List in 1989.

The site of Olympia, situated in the plain of Ilia (a region that corresponds to the ancient district of Elis), lies in the valley of the Alfeios River in the western part of the Peloponnese. The first evidence of human presence dates to the prehistoric times and it is believed that the cult of Zeus developed there at some point between the 10th and 8th century BC. It remained a major Panhellenic sanctuary until the 4th century AD, and revered as the birthplace of the Olympic Games.

The quadrangular area called Altis (meaning "grove") encompasses the main religious buildings of the site, such as the Temples of Zeus and Hera and the Pelopion, the principal altars and the treasuries, built in the archaic or classical period, while outside of it we find structures including gymnasia, sports facilities, hostels and lodging places for priests and athletes, dating from the Classical to the Roman period.

The place would take its name after the cult it hosted, that of Zeus Olympios: Olympian Zeus, an epithet reflecting his status as king of the gods known as Olympians (as they were believed to dwell on Mount Olympus – Greece’s highest mountain, situated between Thessaly and Macedonia). 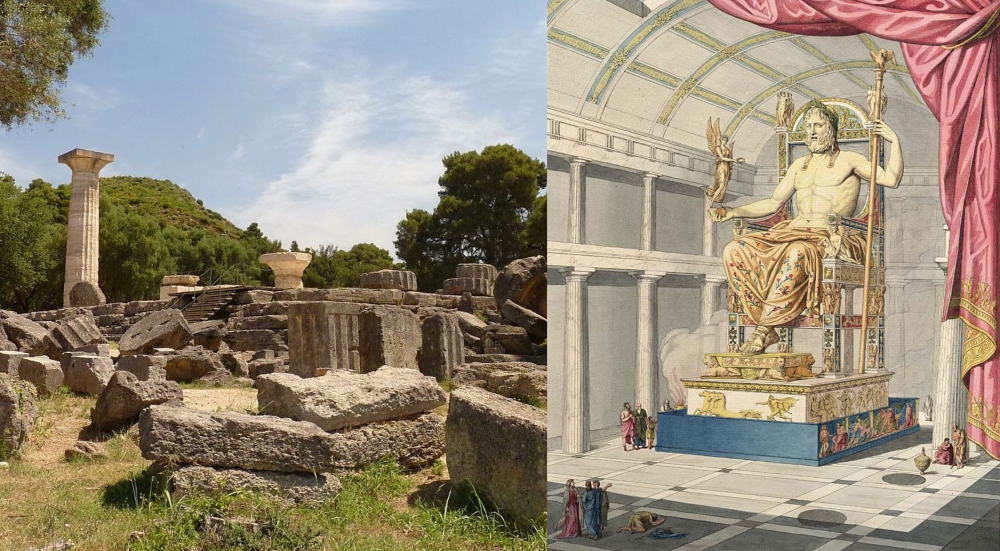 Left: The ruins of the Temple of Zeus in Olympia (by Ronny Siegel by flickr); Right: The chryselephantine Statue of Zeus at Olympia, as imagined by Quatremère de Quincy (1815)

Temple and staue of Zeus

The most important temples in the sanctuary are those dedicated to Zeus and Hera, respectively. The Temple of Zeus is the largest temple in the Peloponnese, built by the Eleans (the people of Elis) to celebrate their victory against the neighbouring tribes of Triphylia.

Constructed by the architect Libon of Elis (c. c. 470–456 BC), it is widely considered the archetypal Doric temple. It was a peripteral hexastyle with thirteen columns at the sides, and it comprised a pronaos, cella and opisthodomos; the cella was divided into three naves by two double rows of seven columns.

The temple featured opulent sculptural decoration and, most importantly, it housed the chryselephantine (made with gold and ivory) Statue of Zeus at Olympia. The colossal seated figure, created around 435 BC by renowned sculptor Phidias –who had previously designed the chryselephantine Athena Parthenos in the Parthenon–, was made of ivory plates and gold panels on a wooden framework and stood at over 12 metres (40 feet) tall.

Since the antiquity, it was already listed among the monuments that have come to be known as the Seven Wonders of the Ancient World. After the sanctuary fell into disuse (due to the suppression of paganism under Roman emperor Theodosius I and his successors), the statue was completely destroyed, under unknown circumstances, at some point in the 5th century AD. The temple itself is believed to have suffered serious damage due to a fire, possibly ordered by Theodosius II, and further destroyed by the earthquakes of 522 and 551 AD. The area was probably flooded and abandoned in the 6th century AD.

The Temple of Hera and other monuments

The Temple of Hera, also known as Heraion, is the oldest temple in the Altis. Scholars today believe it was built in the Archaic period –around 600 BC or perhaps a few decades earlier– probably by the inhabitants of Skillous, an ancient city of the area. It was a Doric peripteral hexastyle with a pronaos, cella and opisthodomos, with sixteen columns at the sides.

It was initially dedicated to both Zeus and his wife Hera, until a separate temple for Zeus was built. According to researchers, it had been restored on several occasions, and in Roman times it was used as a "display area" for the most treasured artifacts of the sanctuary, such as the famous Hermes of Praxiteles.

Other buildings that used to be in the Altis include the Pelopion, a sacrificial altar supposedly built on the tomb of Pelops, a hero who is the eponym of the Peloponnese; the Prytaneion, where the priests and magistrates lived (which also housed the Altar of Hestia where the original Olympic flame once burnt), and the Philippeion, an Ionic circular memorial which contained chryselephantine statues of Philip II of Macedon and his family, in celebration of his victory at Chaeronea (338 BC). 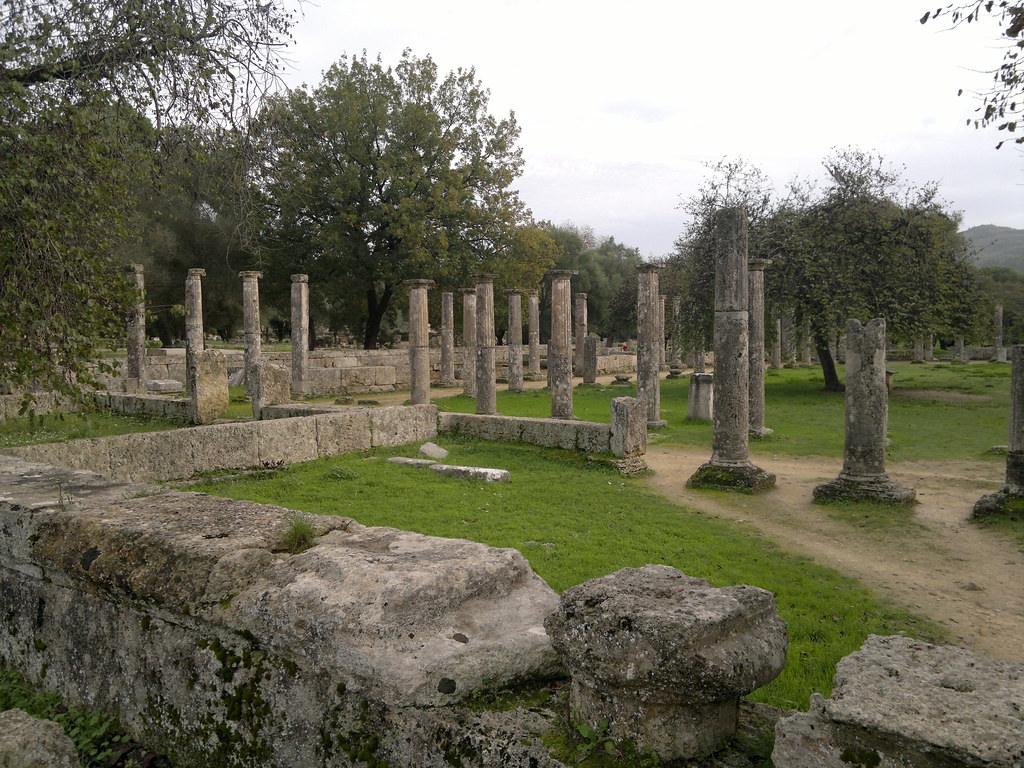 Remains of the palaestra in Olympia (by John Karakatsanis via flickr)

The site of Olympia also contains remains of all the sports facilities used for the ancient Olympic Games, the most important of the many festivals of the Ancient Greek world. Believed to date from 776 BC, these athletic competitions were held every four years. The games (the establishment of which had been attributed to various mythical heroes) were held in honour of Zeus, and attracted contests from all the corners of the Greek world.

All free male Greeks were allowed to participate in the competitions, provided they had not committed a crime against the gods, and the prizes for the victors were olive leaf wreaths. During the celebration of the games, an Olympic truce (Ekecheiria) was announced, which protected Olympia from invasion and forbade any individual or government to interfere with anyone traveling to and from the Olympics. 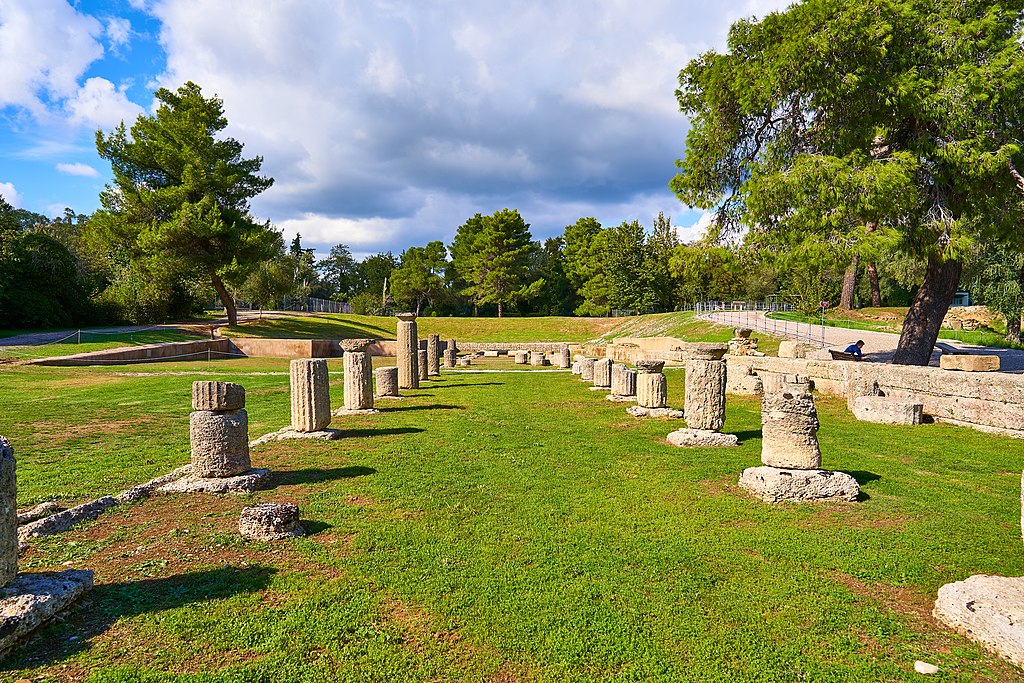 Remains of the Gymnasion of Ancient Olympia (by George E. Koronaios via Wikimedia Commons)

The games were so important that the "olympiad" (period of four years) became a unit of time in historical chronologies. The Olympics continued to be held after the Roman conquest of Greece and, although they initially declined in popularity, they underwent a revival under Emperor Augustus (Octavian).

Even after damages to the site due to natural destructions and invasions, the games were held until at least 393 AD, and probably completely discontinued under Roman emperor Theodosius II. Inspired by the ancient Olympics, French Baron Pierre de Coubertin established the modern Olympic Games in 1896, and they are the world’s most prestigious athletic event today. 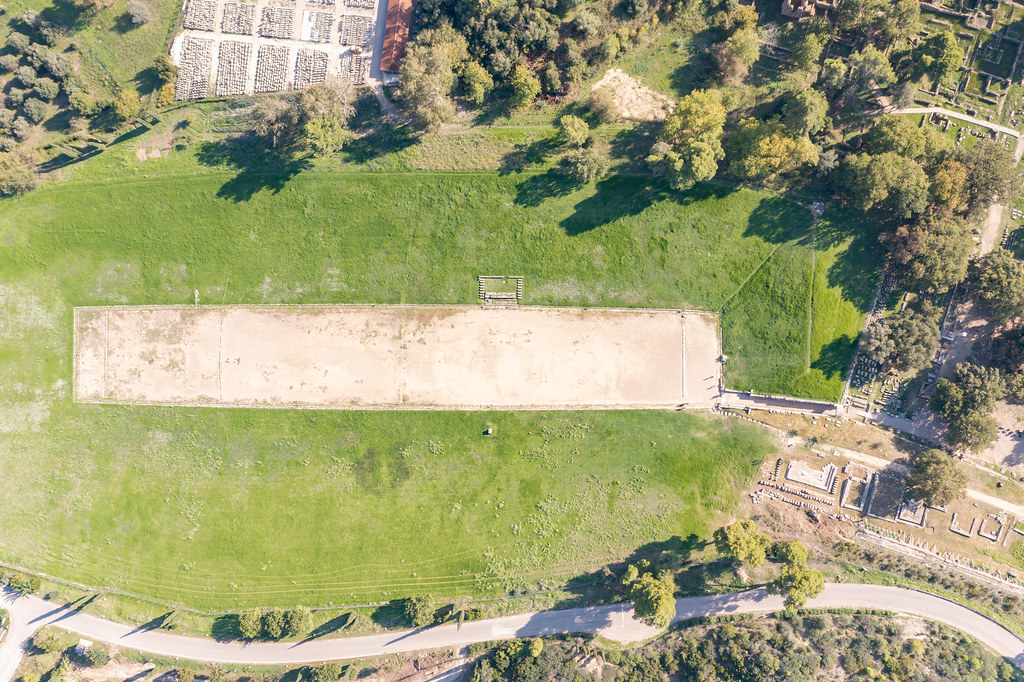 In the ruins of Ancient Olympia, one can still see the remains of many sites and buildings linked with the organization of the Olympic Games, such as the Stadium, the location of many events, especially running races, the gymnasion (training facility), the palaestra (wrestling ground), and also baths and hostels.

The modern Olympics are still closely linked with the site: every four years, months before each opening ceremony of the games, an Olympic flame lighting ceremony takes place in Ancient Olympia. Several young women, performing as "priestesses", act out a ritual at the altar of the Temple of Hera, and a "High Priestess" ignites the first torch of the Olympic Torch Relay, using a parabolic mirror that collects and concentrates the rays of the sun. She then presents the torch and an olive branch to the first relay bearer, who is always a Greek athlete. 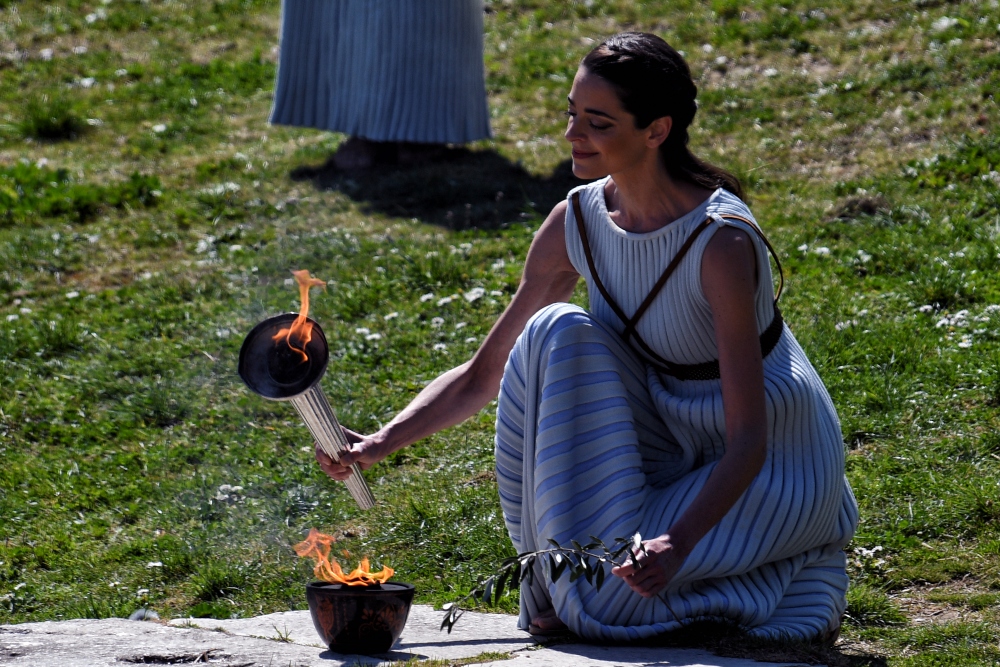 Besides the Olympic Games Olympia also hosted the Heraean Games or Heraea, women's athletic competitions in honour of the goddess Hera. Women in ancient Greece were excluded from participation in, but also from the audience of, athletic competitions, where athletes usually competed completely naked. However, the Heraea were an exclusively female sporting event, which was as least as old as the Olympics. One myth links their establishment with Hippodamia, the wife of hero Pelops.

The Heraean Games were also held every four years, two weeks after the end of the Olympics. According to Pausanias, the games only featured running races, and only unmarried girls and women were allowed to participate, running in categories according to age. The festival was presided over by a group of sixteen women, and the winners of the races were awarded olive wreaths. 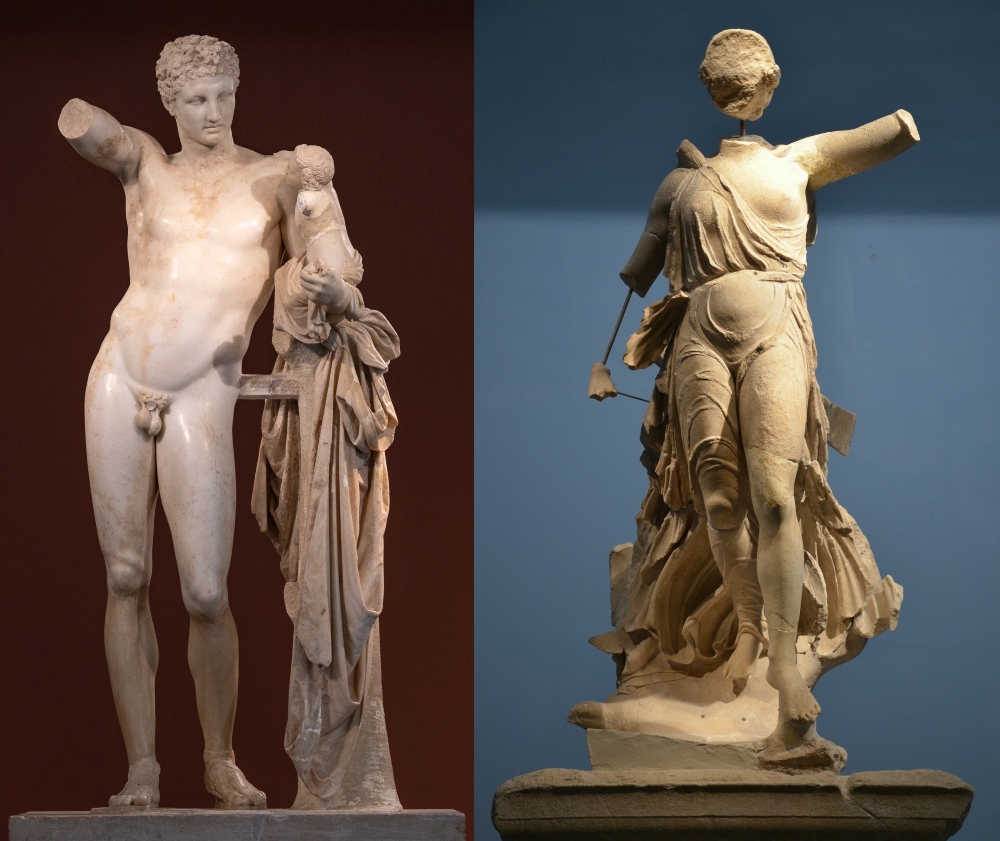 The Archaeological Museum of Olympia, founded in 1882, was the first museum in Greece built outside of Athens, and is still one of the most important of its kind in the country. It houses objects produced and used in the area from prehistory to its time under Roman rule. Among its most important exhibits are the impressive pediments of the Temple of Zeus, the statue of Hermes and the Infant Dionysus (4th century BC), attributed to renowned sculptor Praxiteles, the Nike of Paionios (around 420 BC), and the Late Archaic Greek terracotta statue group of Zeus and Ganymede.

Read also via Greek News Agenda: POEM OF THE MONTH: The Olympic Hymn by Kostis Palamas; Ekecheiria, the ancient Greek tradition for the Olympic Truce to be applied in Tokyo 2020; Ancient Athenian & Attic Festivals; The new Athens Olympic Museum; The archaeological sites of Mycenae and Tiryns

N.M. (Based on the original article from Grèce Hebdo; Intro image: The Temple of Hera in Olympia © GNTO / P. Matsouka)