The cultural and social study of the Greek world has been challenged especially in the last decade for a number of reasons related to the economic and refugee crisis, the sociopolitical changes and a remarkable artistic regeneration without neglecting a number of global challenges posed such as the pandemic, technology etc. Greek Studies Now, a network initiated through a partnership between the Modern Greek studies communities and programs at the University of Oxford and the University of Amsterdam (UvA) responds exactly to the “need for revising our analytical and theoretical tools to address the complexities of a radically shifting reality in present-day Greece” as it is aptly described on the website of the network.

Greek Studies Now was initiated in 2019 by professors Dimitris Papanikolaou, Associate Professor of Modern Greek at the University of Oxford and Maria Boletsi, Marilena Laskaridis Chair of Modern Greek Studies at the University of Amsterdam with the key contribution of Dr. Kristina Gedgaudaitė, who has worked at both universities and acted as a bridge between the two communities from the very start of the network.

The shifting place of Greece in Europe and the Mediterranean calls for an interdisciplinary, critical, wider field of Modern Greek studies engaging interdisciplinary methodologies and innovative participatory research to address complex issues regarding Greek culture and politics, and this is exactly the aim of the Network. Inviting scholars and researchers from various disciplines Greek Studies Now through partnerships and conversations aims to showcase the prospect of renewing, enriching, and indeed, redefining, Modern Greek studies as a field showcasing its relation to other fields. Through the analysis of cultural texts in the broader sense i.e. literary works, theatrical plays, songs or films Greek studies are connected with the rest of cultural studies inaugurating a fascinating debate.

As Papanikolaou and Boletsi note, although the field of Modern Greek studies includes comparative analysis involving multiple disciplines, surprisingly not all of these disciplines are intersecting in substantial and meaningful ways stressing that “not all scholars whose research focuses on aspects of Greek culture and society – be it in art history, anthropology, archaeology, architecture, or other domains – felt, or still feel today, connected to modern Greek studies as a field”.

The Network puts emphasis not only on the study of contemporary Greek culture as such but also on the way present cultural production generates a recasting of the (Greek) past. The dominant crisis-framework that has been used to understand the recent cultural production is no longer suitable as the political discourse in the country has shifted to the framework of recovery and rebuilding. Covid-19 crisis has further complicated the issue. There is thus a need to identify the new cultural narratives emerging and guiding a complex, dense and disorienting present, and future. Finding adequate theoretical vocabularies and grammars to capture and critically address these shifting realities in Greece and beyond is among the challenges that the Network is facing.

The approach of past and present regarding cultural analysis contributes to the understanding of the cultural objects not in terms of unilateral and linear influence but rather in a perpetual dynamic exchange that transcends both past and present making them porous. In future meetings, Greek Studies Now will focus on what constitutes Greek or national literature today; on non-eurocentric thinking about Greece; on the cultures of biopolitics (including the contemporary biopolitical uses of antiquity); on the often intersecting legacies of Greece’s orientalization, modernization and neoliberalization; on the rise of performance and Greekness as performance etc.

On the occasion of the bicentennial of the Greek Independence War, Greek Studies Now organized a webinar titled “Dream Nation; 200 years on” (22.03.2021) aiming to discuss the role of the Greek nation in today’s social and political landscape analyzing the aspirations that are expressed through the nation as both a symbolic structure and an ongoing sociopolitical project. A series of webinars concerning arts and its histories in contemporary Greece, the question of biopolitics in the era of Covid-19, the refugee crisis, the phenomenon of Golden Dawn in Greece has also been organized. 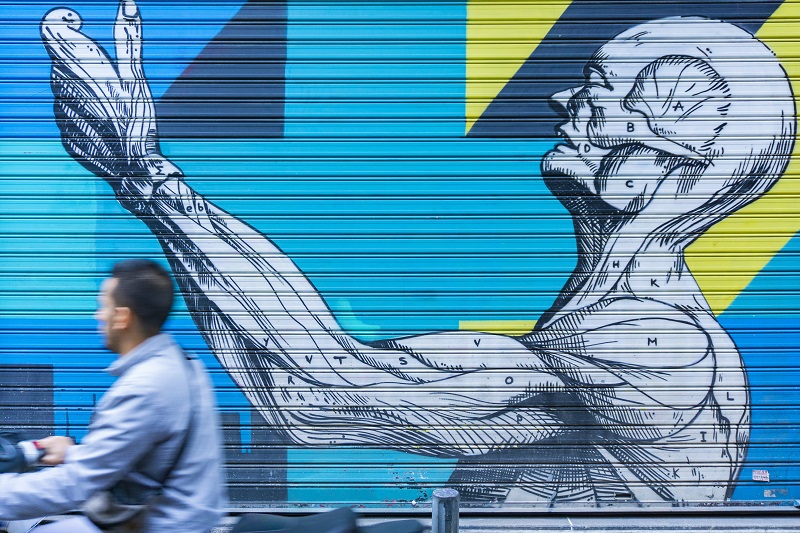 Graffiti in Psyri, Athens - Photo by Daria Nepriakhina on Unsplash

Greek Studies Now is initially funded by a TORCH (The Oxford Research Center in the Humanities) international partnerships scheme. It also receives financial support from the Aikaterini Laskaridis Foundation, the department of Modern Greek Studies at the University of Amsterdam, and the Sub-faculty of Byzantine and Modern Greek (Oxford). The network’s website was made possible thanks to an “Innovative Initiatives Grant” by the Modern Greek Studies Association (MGSA).