Study in Greece Masters of the Week: Professor Michael Tatarakis presents the Msc in Laser, Plasma & Applications at HMU

Study in Greece interviewed Professor Michael Tatarakis of the Department of Electronic Engineering at the Hellenic Mediterranean University (HMU), about the MSc in Laser, Plasma & Applications offered at the department, its features and what it has to offer to international students. 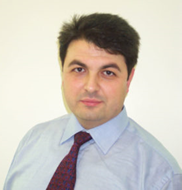 Michael Tatarakis is a Professor at the Department of Electronic Engineering of the Faculty of Engineering at the Hellenic Mediterranean University, with a specialisation in plasma physics, high power laser matter/plasma interactions and applications as well as in high current magnetically confined pulsed power plasma studies. He is the Director of the Institute of Plasma Physics & Lasers (IPPL), a statutory research institute of the Hellenic Mediterranean University research centre. He received his PhD in 1997 from the Physics Department of Imperial College London and since then he has occupied several research positions at Imperial College London, at the Technical University of Crete at the TEI of Crete and at the HMU. He also holds a honorary visiting professorship at the Department of Physics of Imperial College London.

Mr Tatarakis, please describe us briefly the content and the main objectives of this pioneering MSc programme in Laser, Plasma & Applications offered by the Hellenic Mediterranean University.

The MSc programme in Lasers, Plasma & Applications promotes scientific knowledge and research by providing a high level of specialised knowledge to its students to meet the research and development needs of the international academic and labour market environment. In particular, the purpose of the MSc programme is to offer its students a high level of postgraduate education on the subject of the science and applications of Lasers and Plasmas which in recent years has been rapidly and continuously advancing internationally. The training of young scientists in this extremely important field due to the vast variety of innovative applications will enable the students to participate actively in the international developments concerning such innovative technologies and cutting-edge knowledge.

Objectives of the MSc programme in Lasers, Plasma & Applications:

1. The education and preparation of its students for the acquisition of the necessary knowledge so that upon graduation they are ready to join a PhD programme of study in the field,

2. The staffing of the academic and research institutions with highly trained scientific personnel of specialised knowledge in laser generated plasmas,

3. To enable its students and graduates to broaden their horizons with acquiring new knowledge strengthening their competitiveness in the European and international labour market,

4. To strengthen the skills of its graduates aiming to establish, independently or in collaboration with other scientists, new innovative small and medium enterprises,

5. To prepare the graduates of the programme for an academic career in such a competitive environment or to staff the emerging private sector enterprises in Europe and abroad.

Duration of the course:

The MSc course is offered as a full-time or part-time option according to article 33 of law 4485/2017 as it applies. The minimum duration for the award of the Postgraduate MSc diploma is set at three (3) semesters of study, of which the third is available for the elaboration of the postgraduate diploma thesis.

The main target group of the LaPlA MSc are graduate students from the European but also non-European Universities graduated with a bachelor (or equivalent) degree in Physics, Mathematics, Electrical, Electronic, Chemical or Mechanical Engineering, Material Science as well as Computer Science & Engineering.

Language: The teaching language is English.

Tell us about the academic and scientific perspectives offered by this international programme.

The MSc course "Lasers, Plasma and Applications " is the update (based on law 4485/2017) of the MSc course "Plasma Physics and Applications - Plasma Physics and Applications" which is developed and evaluated under the Erasmus Life Long Programme (LLP) - Curriculum Development (Project Number: 510587-LLP- 1-2010-1-GR-ERASMUS- ECDSP - in collaboration with seven (7) European universities in the field of study (i.e., Imperial College London - United Kingdom, University of Bordeaux-France, Technical University of Prague - Czech Republic, University Milano Bicocca - Italy, Queen's University Belfast - United Kingdom, Technical University of Madrid - Spain, National Institute of Nuclear Science and Technology (INSTN) - France). The development of the course is the result of the synergy of leading scientists of the above European Universities. In the above context, mobility of students via Erasmus+ in top European Universities is encouraged during the MSc course studies. As a result, the LaPlA MSc programme of study offers to its students a unique and advanced environment of study in Greece via their involvement in the research performed at the Institute of Plasma Physics & Lasers (IPPL), but also via their mobility to top European Universities.

What career opportunities can this programme provide its students, as it touches on a very specialised field?

The programme touches on a wide as well as extremely timely and advancing area in physics and engineering, that of Laser Matter Interaction, Plasma Science & Technology. The last decade, advances in laser generated plasmas as well as in the related area of inertial fusion energy research are impressive, leading to the emerging of innovative private enterprises involved in innovative plasma technologies, among others in optoelectronics, material science and associated biomedical applications of the laser generated plasma secondary sources. There is currently a large demand in the emerging private enterprises for scientists with the specialisation offered by the MSc programme. This demand is being further enhanced following the recent advances in Inertial Fusion Energy at the National Ignition Facility in the US.

As a result, the graduates of the programme, having gained the advanced skills offered by the MSc programme of study are pioneering to enter such a competitive and demanding field of profession. In particular,

Given that, in recent years, Greek universities have been promoting extroversion with great success, by carrying out important collaborations and international initiatives, how do you think that the horizons could be further expanded within the scope of internationalisation?

The Hellenic Mediterranean University (HMU) is pioneering in extroversion with long standing tradition. It is important to note that the University was in 2013 awarded by EU Erasmus authorities, the second prize for the quality and the quantity of its Erasmus actions. Furthermore its staff members have gained 6 out of 9 prizes awarded from IKY (National Agency) to the coordinators of the Hellenic Erasmus Intensive Programmes. Furthermore, since 2020, the Hellenic Mediterranean University is a leading member university of the European University ATHENA boosting the high quality implementation of the extraversion actions of the University. MSc programme LaPlA further expands internationalisation priority policies by placing collaborating universities at the centre of the development of a Europe of knowledge. In particular, the LaPlA MSc programme fosters expansion internationalisation policies by: a) the transfer of good practices for the efficient promotion of effective reforms in higher education b) encouraging inclusive approaches involving public and private sector authorities relevant in the field of study stakeholders, c) building the capacities of the collaborating Universities in the partner countries to modernise the management of financial and human resources for the benefit of employment and d) by promoting partnerships in higher education & research within Europe and beyond.

How do you believe that both the University as well as the local community of Chania would benefit by attracting international students?

In line and extending the conclusions of the previous section 4, the local community of Chania, Rethimno (via the strong involvement of IPPL) and Crete overall, benefits through the impact of international academics and students on the larger community but also through the dissemination actions triggered by the MSc programme LaPlA such as open days for the public, participation in the action “Researchers Night” for the local community, and finally through the encouragement to the young scientists for the initialisation of high technology start-ups relevant to the technology theme of the MSc programme. Combined with such multilevel interactive interaction with the society, the MSc programme LaPlA becomes an important island for the transformation of knowledge and the achievement of creating a scientific culture in the society. Indeed, the international MSc, through the described actions of diffusive interaction and publicity of its achievements and innovations, is already having a wide response with social, scientific, educational and economic impact on society. The programme through its dissemination actions, further increases the interest and access of citizens to the scientific results and achievements of research conducted at HMU and collaborating partners, to create opportunities and ideas for cooperation with science bodies, craft or industrial production units or companies of high technology portfolio with significant results in the economic development of the local community but also the country, since the economic prosperity of a country and society is inextricably linked to the education of its citizens, high technology and the high level of services offered. All the above compose a model for a strong impact on the society, with social, scientific, educational and economic implications in the direction of the added value that education and research offers for the overall development of the local society and the country.

Please tell us a few things about the Hellenic Mediterranean University –its location, its facilities and its success plans for the future.

The Hellenic Mediterranean University (HMU) is a Public University. The University provides undergraduate and postgraduate studies offering 11 Bachelor degrees as well as postgraduate studies leading to Master of Science and Doctoral degrees. It focuses on research and innovation as well as lifelong learning and it offers scientific, technological and consultancy services of high quality. The HMU employs around 400 qualified academic and technical staff and serves more than 14.500 students. HMU has campuses in all major cities of Crete: Chania, Rethymno, Heraklion, Agios Nikolaos and Sitia. There are limitless opportunities for student exchanges with over 100 European universities and beyond, and for active student participation in research and development projects. The Hellenic Mediterranean University is a leading member university of the European University ATHENA boosting the high quality implementation of the extraversion actions of the University. For more details about the University one can consult its official site and its International Relations Office.