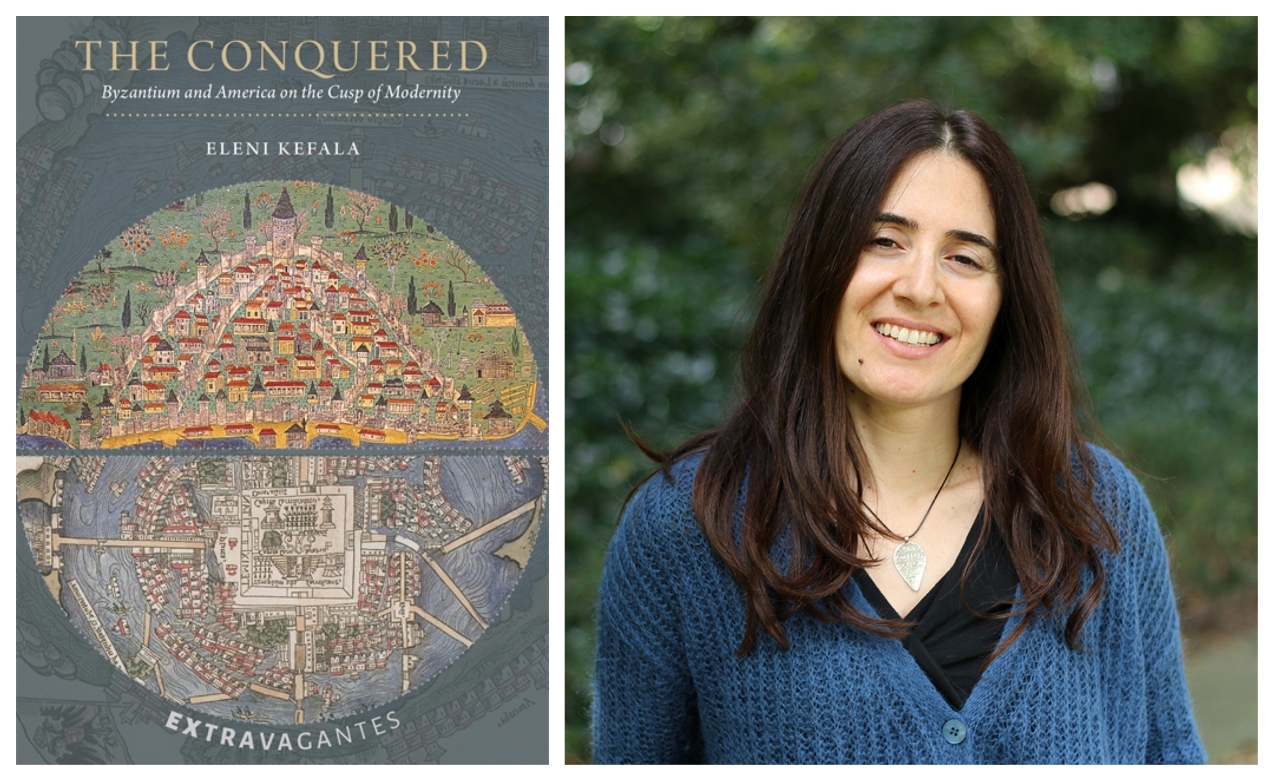 The 2022 Edmund Keeley Book Prize is awarded to Eleni Kefala’s ‘The Conquered: Byzantium and America on the Cusp of Modernity’ (Dumbarton Oaks, 2020). According to the award committee,  The Conquered “is a work of truly original scholarship, bold in the experiment it ventures – an extended comparison between Byzantine Greek and indigenous American culture and society – and deeply grounded in literary, linguistic, and historical research”.

The book departs from the two historical events that took a few decades –and many thousands of miles- apart, in the Byzantine and the Aztec Empires: in the middle of the fifteenth century, ominous portents like columns of fire and dense fog were seen above the skies of Constantinople as the Byzantine capital fell under siege by the Ottomans. Allegedly, similar signs appeared a seven decades later and seven thousand miles away, forecasting the fall of the Mexica capital of Tenochtitlan—Tlatelolco to the Spanish and their indigenous allies. After both cities had fallen, some Greeks as well as Mexica turned to poetry and song to express their anguish at the birth of what has come to be called the “modern” era.This study probes issues of collective memory and cultural trauma in three sorrowful poems, the “Lament for Constantinople,” the “Huexotzinca Piece,” and the “Tlaxcala Piece.” Composed by anonymous authors soon after the conquest of the two cities, these texts describe the fall of an empire as a fissure in the social fabric and an open wound on the body politic. They are the workings of creators who draw on tradition and historical particulars to articulate, in a familiar language, the trauma of the conquered. 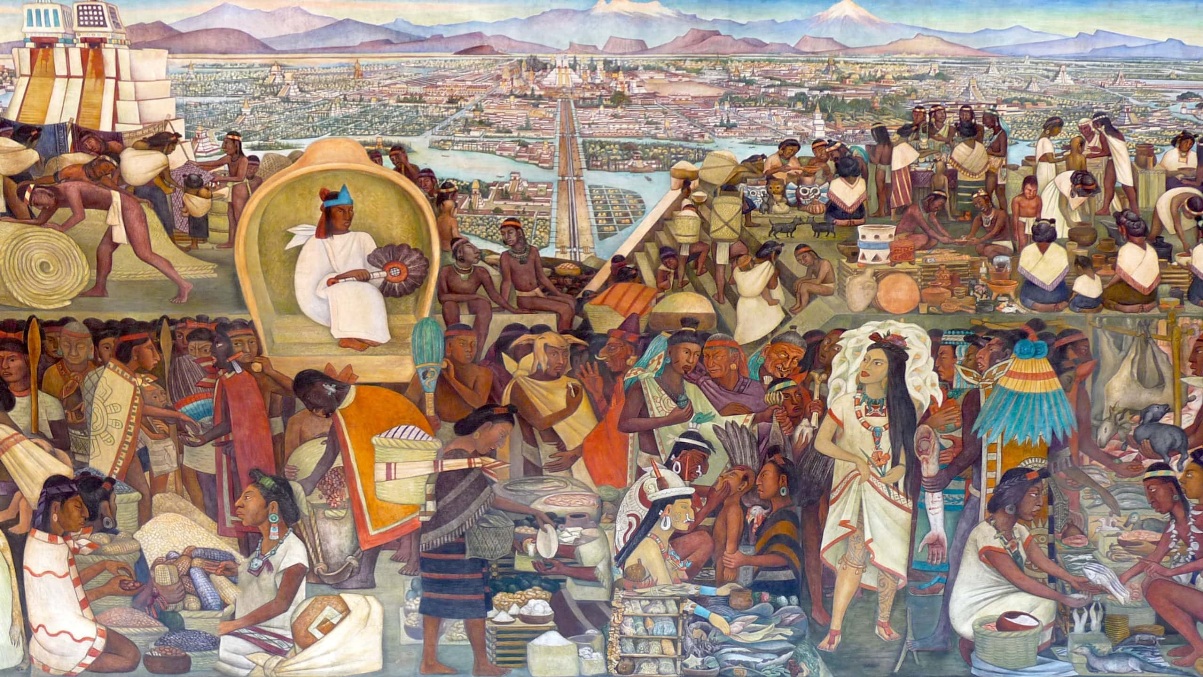 “The Great City of Tenochtitlan” (1945), a mural painted by Diego Rivera (1886-1957) and located in the Palacio Nacional (National Palace)of Mexico, located in El Zócalo in the center of Mexico City. PHOTO: COURTESY OF EL COMANDANTE AND THE PALACIO NACIONAL, LICENSED UNDER CC BY-SA 3.0.

As the Edmund Keeley Book Prize award committee points out: “this comparison between Byzantine Greek and indigenous American culture and society, proceeds by close readings of three key texts: poetic laments addressing the fall of Constantinople in 1453 and Tenochtitlan in 1521, which have found their way into the modern Greek canon but not – for reasons explored by Kefala – the Mexican. The book begins and ends in the present with a problem: the enigmatic inheritance of collective memory and cultural trauma that continues to shape Greek identity today as well as our study of Greek history and culture. Dwelling on the “cusp” of modernity, Kefala argues that we understand the aftermath of conquest as a foundationally modern experience, inaugurating the formation of identity in the radical transformation of social worlds, whether or not that rupture was experienced as traumatic.

Working from her own translations of Greek, Nahuatl, and Spanish texts, Kefala closely examines the literary devices and cultural mechanisms by which the memory of conquest was transmitted in these two contexts, including songs, paintings, folklore, funerary practices, and theologies of time. The conquest of the Mexica, developed here as a rich socio-political history in its own right, also offers a counterpoint to the conquest of Byzantium, showing a process of integration and recontextualization rather than (primarily) of reckoning with trauma. Through this comparison, Kefala shows how the “premodern” and the “nonmodern,” figured respectively as Byzantium and pre-Columbian America in Enlightenment and colonial representations, played a crucial role in the constitution of modernity itself. A richly illustrated, gorgeously written and gripping read, this book reimagines the field of Modern Greek Studies in a fresh and persuasive way”. 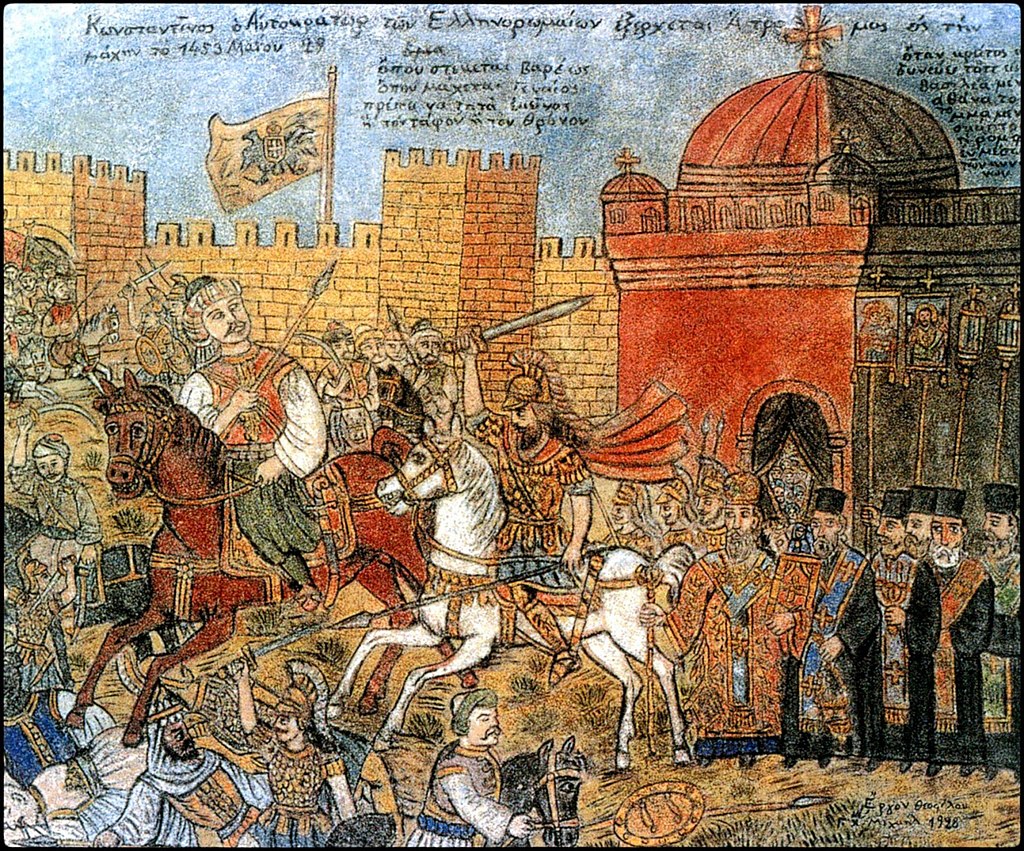 "Constantine the Emperor of the Greco-Romans exits fearless into the battle on 1453 May 29", 1928 mural by Theophilos Hatzimihail

The Edmund Keeley Book Prize is awarded by the Modern Greek Studies Association to an academic book dealing with modern Greece or a Hellenic theme published originally in the English language. Through this award, the Modern Greek Studies Association celebrates the contributions of Professor Edmund Keeley, who served as president of our association, authored or translated over 30 books, taught Hellenic Studies for 40 years, and was a mentor and a source of inspiration for generations of scholars. Regrettably, Professor Keeley passed away this year.

Professor Kefala will be presented with the Edmund Keeley Book Prize at theaward ceremony of the 27th MGSA Symposium on Thursday, October 13th, at York University, in Toronto, Canada. Eleni Kefala is a poet and academic, a senior lecturer in the School of Modern Languages at the University of St Andrews. She is the recipient of the State Prize for Poetry in her home country of Cyprus for the book Χρονορραφία [Time Stitches, forthcoming in English, translated by Peter Constantine, from Deep Vellum] and served on the jury of the 2022 Neustadt International Prize for Literature. Eleni Kefala has been Mellon Postdoctoral Fellow in the Humanities at the University of Pennsylvania, and Dumbarton Oaks Fellow at Harvard. 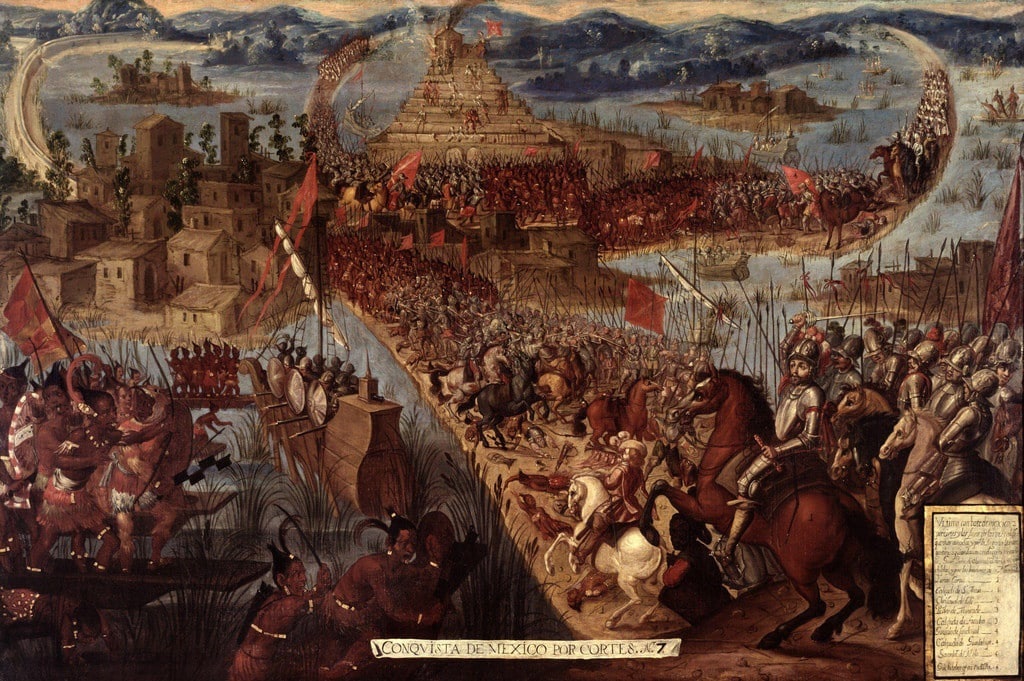 "Conquest of Mexico by (Hernán) Cortés" depicts the 1521 Fall of Tenochtitlan, in the Spanish conquest of the Aztec Empire, unkown artist, second half of 17th century

In an 2016 interview while she was Dumbarton Oaks Fellow, Kefala shared that “the idea of a comparative study of Byzantium and America came as I was writing two theoretical chapters on “modernity” and its “others” for the purposes of a monograph I’ve just finished, Five and One Theses on Modernity. So what I was aiming at, and basically what I’m interested in, is what the moderns, while trying to define their own “modernity,” had to say about Amerindians, on the one hand, and Byzantium on the other. [...] the book will be about how the west discursively constructed those “premoderns” from the Renaissance on, the first chapter will actually look at the point of view of the Byzantines and the Amerindians—that is, the point of view of the defeated, how they saw the conquest. For instance, the Aymara in what is today Bolivia and Peru referred to the so-called “discovery” of the Americas as Pachacuti, meaning “the world upside down.” So I want to look at the perspectives of the people who were conquered in both cases.”

Kefala’s research examines modernity across different periods, disciplines, and cultures, adopting novel interdisciplinary approaches by bringing together literature and a range of artistic media as well as by exploring new comparative avenues in transcultural projects on Nahuatl and post-Byzantine poetry, twentieth-century Argentine and Greek cultures, and Pre-Columbian and Byzantine civilizations. Currently, she is completing her fourth monograph, which sits at the intersection of critical and cultural theory, intellectual history, history of science, sociology, and ecology.