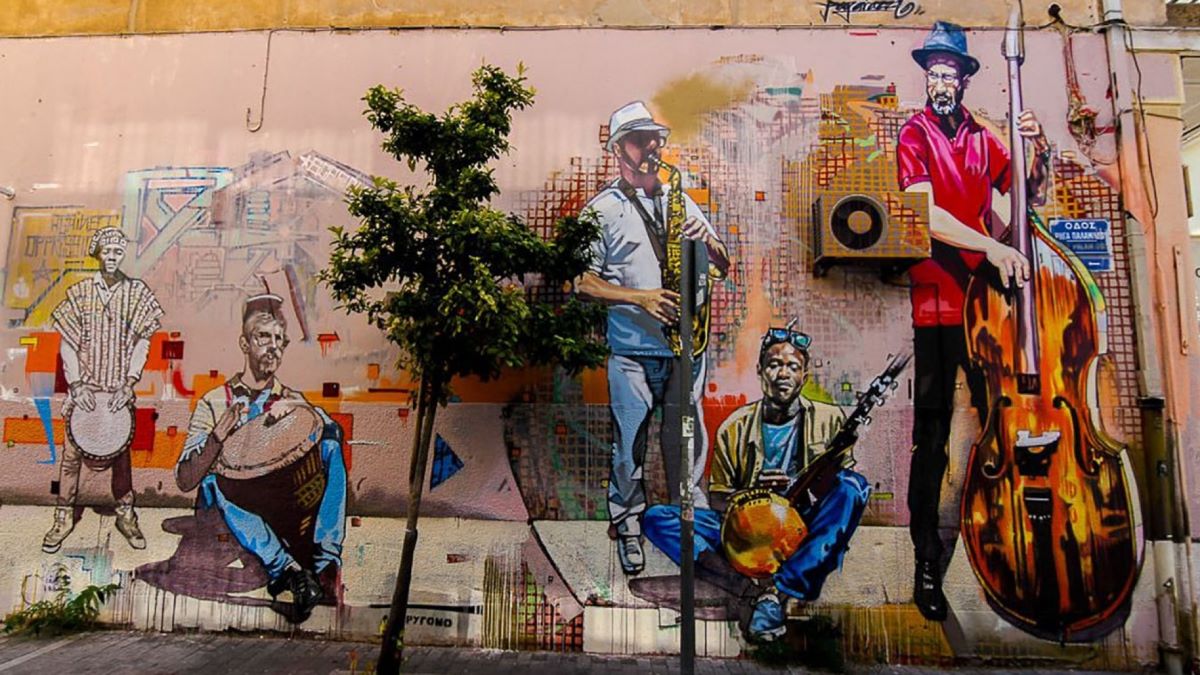 To celebrate the 200 years of Greek independence, public radio station Kosmos 93.6 asked ten foreign musicians who live and work in Greece to chose a favorite song and cover it in their native language -and music genre. The results were compelling, and the show was broadcasted on March 24 2021, with head of Kosmos Radio Leonidas Antonopoulos presenting the songs and the artists.

Almost one year later most of these covers have been released on YouTube, and you can have another chance at enjoying them. Below you can listen to beloved Greek songs by foreign musicians, hailing from such diverse countries -and continents- as Cuba, Peru, France, Congo, U.S.A., Mexico, Italy, Syria and Albania, who covered their favorite Greek song and "sung their own Greece"!

Musician Yoel Soto Gonzales was born in Cuba and grew up in the city of Cien Fuegos. After important collaborations and concerts in Latin America and Europe, the bassist, guitarist, songwriter and poet has been living in Greece for the last ten years. Here he presents a Greek-Spanish version of the traditional Macedonian song “Apano Stin Triantafyllia” as "A Orilla Del Río" connecting Afro-Cuban and Greek traditional instruments, such as batá, gaida and davul, in collaboration with the renowned Greek traditional singer and santourist, Areti Ketime.

American saxophonist and flutist David Lynch was Born in 1961 in Winnetka, Los Angeles, and is one of the most respected and accomplished musicians on the contemporary Greek music scene. Though obviously not of Greek descent, he has developed a unique musical language by submerging his own expressive idiom into that of the Greek musical experience. He chose to cover Orfeas Peridis’ song “Gia poy to evales kardia mou” translating the title as “A familiar voice”. Unfortunately, his cover is not avaible on YouTube, however in the following video you can see a live performance of the original song with Lynch on the flute and singer Eli Paspala on vocals.

Martha Moreleón is a singer and teacher of vocal expression. She was born in Mexico City to a family of artists but she has been living permanently in Greece for years, collaborating with big names of the Greek and of the Latin and jazz music scene. She has always been interested in the promotion of traditional music and the new song (canto nuevo) of Latin America, as well as the spread of Greek song in her homeland. Here she collaborates with Petros Dourdoumbakis for a cover of his own song “Tyfles Elpides” [Ciegas Esperanzas]

The French singer-songwriter Rémi Cavat was born in 1985 in Grenoble and has been living in Greece since 2008, where he moved for love. The first Greek music he came in contact with was rebetika and traditional music, however he chose to cover a quintessential pop song: thirty-six years after the release of Arleta´s song "Serenata", with lyrics by Lakis Papadopoulos and Marianina Kriezi, Cavat proposes his own, French version. In it, he tells the same story, but this time from the point of view of the man of the broken-up couple, "Panagiotis”: who left who with what, and most importantly, what happened to cat, the little "Serenata".

Pedro Fabián was born in Huancayo, a city at an altitude of 3,200 meters in the altiplanos, the Andean highlands of central Peru.He is of Quehcuan descent -one of the ingidenous ethnic groups of Peru- and decided to migrate to Greece in 1992 to escape the Fujimori regime. He has been active in the music scene ever since, with groups like Tierra Brava as well as collaborations with many Latin American, Spanish and Greek artists. His cover version unites Andeis, the highlands of Peru with Psiloritis, the the highlands of Crete, as he chose the rizitiko song "Se psilo Vouno", translated as "En las montañas» and sung with Basilis Dramountanis. Εnjoy the video for the song, shot at Korakopetra, Anogeia on the Psiloritis mountain.

Greek-congolese performer and songwriter Jerome Kaluta is an exception in this list, since he is not a foreigner but a native of Greece, born and raised in Athens. His African roots and a childhood raised on funk, soul, reggae and disco give him however a unique take on Greek music. He chose a traditional tsakonian song “Sou pa mana m´ pantrepse me” and covered it in Lingala, one of the four indigenous languages have the status of national language in Kongo, as «Balisa Nga».

Haig Yazdjian, one of the most celebrated foreign-born musicians living in Greece, was born in Aleppo, Syria in 1959 and is a songwriter, vocalist, Oud player, and producer. His parents are Armenians from Kayseri and Nevşehir in modern-day Turkey. For much of his life he has lived in Greece, which is where he began exploring his interest in traditional Eastern music. In the artist’s own words: “as foreigners who have been living in Greece for years, we had the proposal from the radio station Kosmos 93.6Fm to perform a Greek song in our language due to the 200th anniversary of the Greek Revolution. I chose the “Misirlou" song and performed it with Armenian lyrics. I feel honor and deep emotion for the Greek people who have embraced me for 40 years!!!”

Born and raised in Albania, accordionist and songwriter Dasho Kurti, found himself in Greece with the immigrant wave of his compatriots, who in the early ‘90s, after the socio-political changes that took place in their country, crossed the border in search of a better fortune. Like most of his compatriots, he went through hard times but, in the end, he managed to do what he loves and has studied in his country – music. He is a long-time collaborator of Giorgos Dalaras, and here he chooses to cover one of Dalaras' and Kougioumtzis' most famous songs, «Mi mou thymoneis matia mou» in Albanian as «Mos u trishto»

Italian singer and songwriter from Genova Cristina Fontana is living an working in Athens and has been a lead vocalist of dance-house trio Goldfish and soul-funk-acid jazz collective Dr.Vodkatini. She chose to cover “Tha s’ agapo” by Giorgos Chatzinassios.

French-Greek singer Ian Balzan Dorizas a Greek-French musician and producer born in Paris in 1979 and has released and album titled “Bye-bye Acropolis”. His choice was "To teleftaio potiraki" composed by Manolis Xiotis and Christos Kolokotronis, sung in French as “Le Dernier Soir”.