Animasyros International Animation Festival is the largest festival of its kind in Greece and one of the 20 most important globally. The 15th edition of Animasyros Festival takes place from 20 to 25 September, 2022 in Syros Island, Greece in co-organization with the Municipality of Syros, the South Aegean Region and with the support of electric power company PPC.

With a program richer than ever, this year’s edition of the festival, Animasyros 2022, presents more than 200 films from 43 countries, including 8 competition sections (International, Student, K.ID.S, AnimaPride, National Competition, TV & Commissioned Films, Feature Films & #ThisisEU European Values award), special tributes and events, training sessions, international collaborations as well as the Agora, the industry event which offers various networking opportunities which focus on the countries of the East Mediterranean region. The main theme of this year's edition is animation from the Baltic region (Estonia, Lithuania, Latvia) in a programme titled "The Baltic Animation Way". 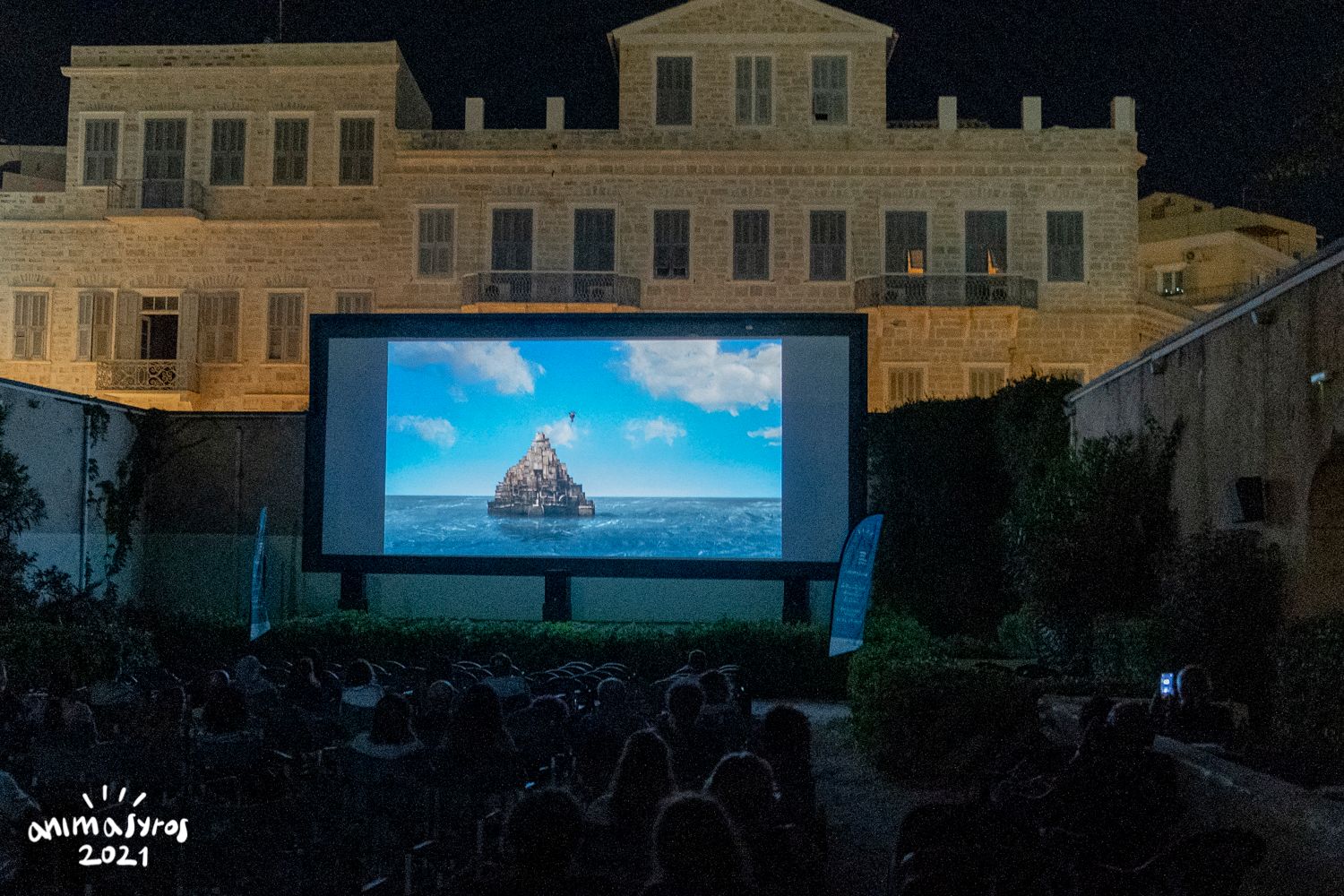 The Festival is organized into three main sections, the artistic programme, the educational programmes and the Agora section, while there are also parallel activities such as exhibitions, concerts and parties. This year marks the 8th year of "Agora" that is steadily evolving into an important international hub of creative professional networking, including pitching sessions, presentations and masterclasses by prominent representatives of the global animation industry.

The official opening of the Festival will take place on September 22, 2022 at the Apollo Theatre in the capital of Syros, Ermoupolis. Among the highlights of the opening will be the debut of a new tourism promo video produced by Animasyros for the Greek National Tourism Orgnaizitation, which presents Greece as an ever-evolving sustainable destination. Also debuting is a new animation film in collaboration with radio station Melodia 99.2 dedicated to the great poet and lyricist from Syros, Manos Eleftheriou.

In its 14 editions, Animasyros has screened over 3,000 animated films from all over the world, it has produced over 75 original animated films in the course of the educational workshops, over 30 projects have been presented at the Agora (Market) section and over 1200 guests have visited the festival. 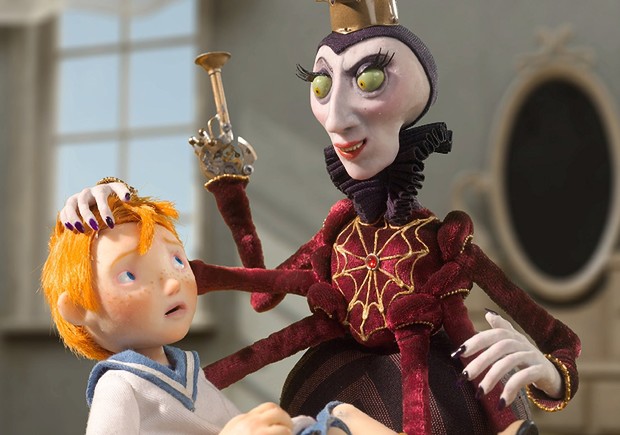 The main theme of the Festival, dedicated to the Baltic countries (Latvia, Lithuania, Estonia), implemented in collaboration with the Latvian Animation Association and the support of the Embassies of these countries in Greece, will present two feature films: "Captain Morten and the Spider Queen" and Gints Zilbalodis’ feature debut "AWAY", which he made entirely by himself and won the Best Feature Film Contrechamp Award in Annecy International Animation Festival (2019), selected in more than 85 festivals and sold in 18 territories. In addition, there will be two specially curated programs with a total of 10 short films from Estonia, Lithuania and Latvia co-curated by Anna Zaca, director of the Latvian Animation Association and Animasyros.

The tribute to Norwegian animation, curated by Anders Narverud Moen, director of the Fredrikstad Animation Festival and focusing on young creators, is being implemented in collaboration with the Embassy of Norway in Greece. 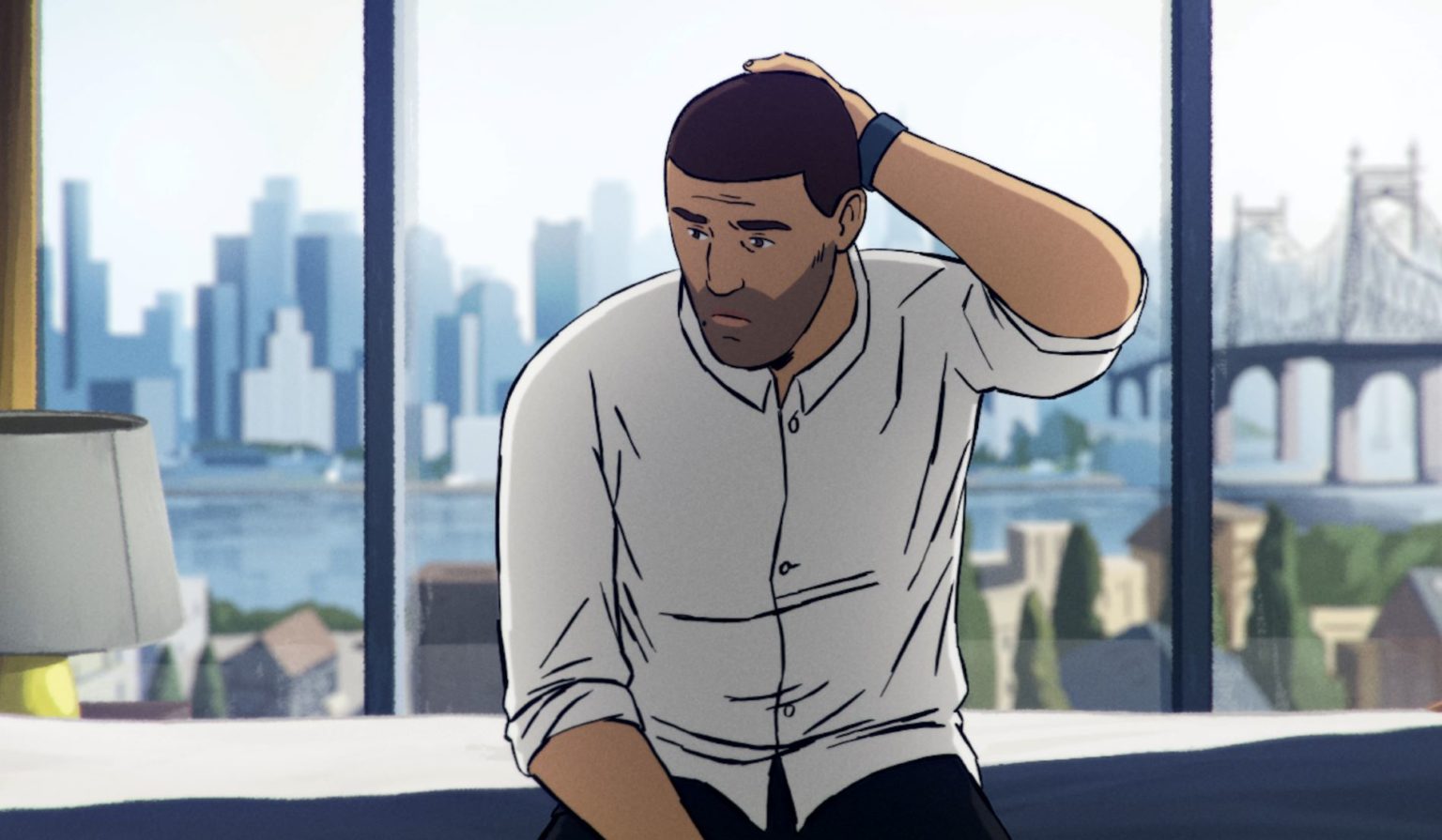 ANIMASYROS presents some of the best films of the last few years and the opening film is “FLEE” by Jonas Poher Rasmussen- which received three Oscar nominations, selected at Cannes and won the Grand Prize at Sundance. The film, which tells the extraordinary story of a man who opens up about his past as a child refugee from Afghanistan, will be introduced by the film's contributors Mikkel Sommer and Danae Katopodi. In addition, the art exhibition "The faces of FLEE" with works by Mikkel Sommer will be open throughout the Festival at Braziliana in Ano Syros.

The ever-current theme of the refugee crisis and the transition from childhood to adolescence will also be seen in the film "The Escape/La Traversée'' by Florence Miaihle from France, while the new film by Ari Folman (known from "Waltz with Bashir") "Where is Anne Frank?" delivers history lessons to kids and adults. "Icarus and the Minotaur' takes us on a trip to Greek mythology (director Carlo Vogele will be present at the screening) and the multi-award winning Spanish film "Buñuel in the Labyrinth of the Turtles" pays tribute to the father of surrealism (illustrator Fermin Solis will attend the screening). 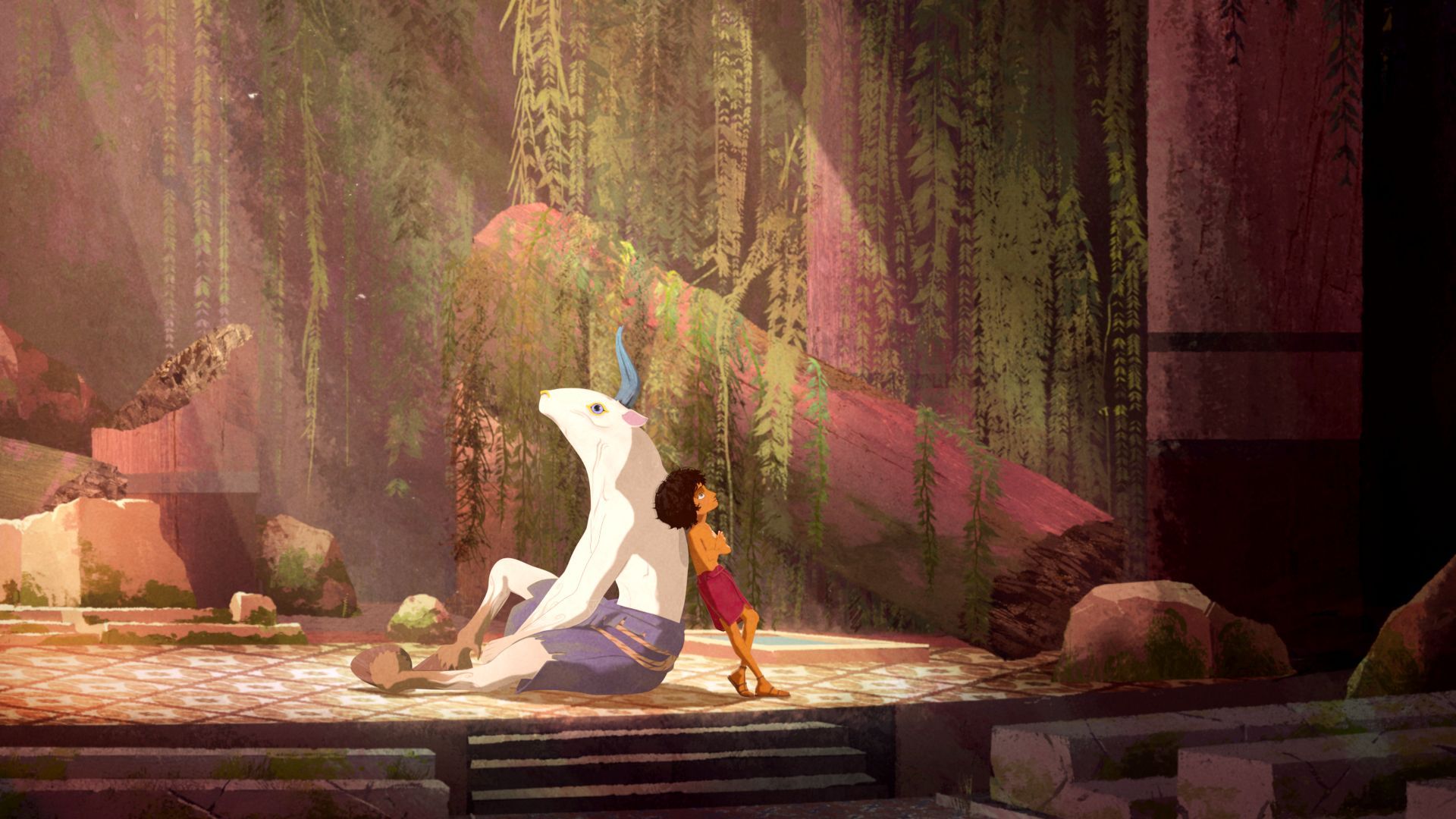 The journey into the magical world of animation continues with "The Ape Star", a film about unconventional love, in collaboration with the Athens International Children's Film Festival as well as the postmodern musical comedy “The Island” by Anca Damian (“Marona's Fantastic Tale”).

Original and ground-breaking works from around the world are included in the International Panorama through 27 films originating from America, Europe up to South Korea and Australia with themes ranging from documentaries and fiction to video art. 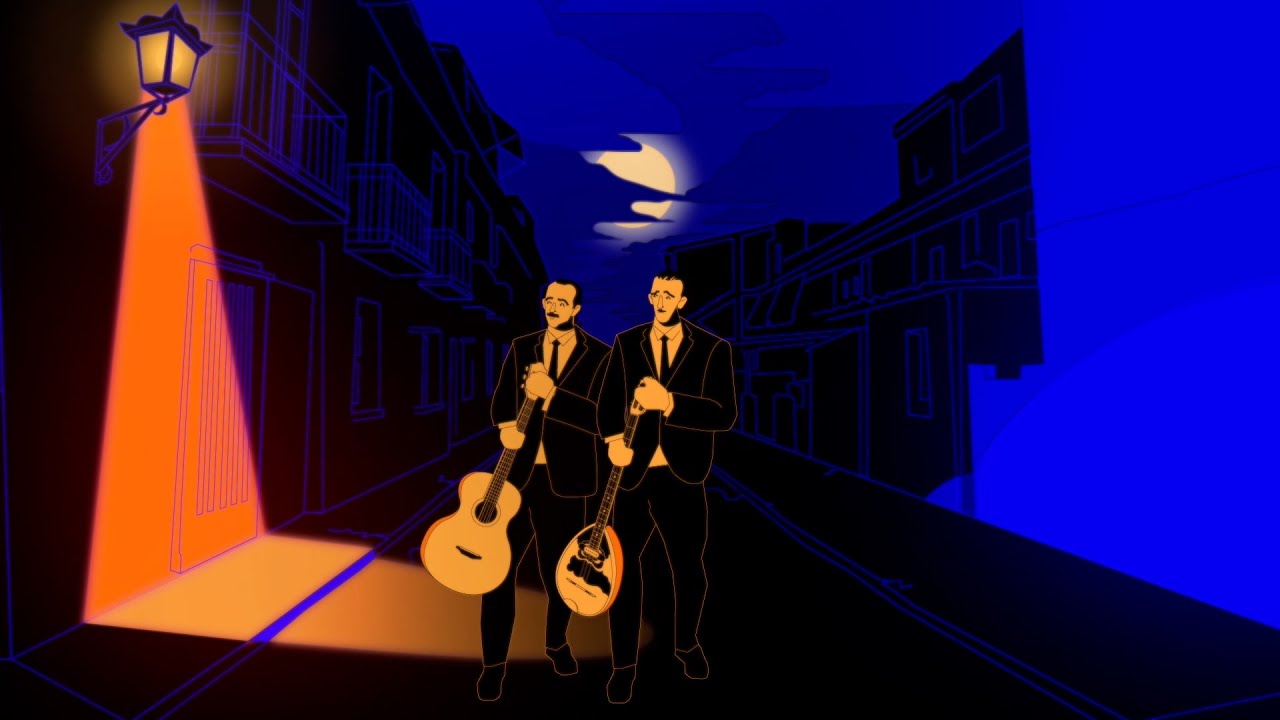 Over 100 films are included in the 8 competition sections of the Festival, such as the OSCAR-nominated "Bestia" (International Competition Section), the new video clip "Up and Away" (Sub Pop) by Greek musician and visual artist Σtella, the video clip "Bientôt la Lumière" with music by Mad Rey and art by Thami & Hedi Nabil (who also handled the new Red Hot Chilli Peppers video) in the TV & Commissioned Films as well as films from internationally renowned animation schools (Gobelins, FAMU, Bezalel) in the Student Competition Section.

The Greek Competition Section consists of 20 films. Renowned animators from Greece, as well as rising stars, present at Animasyros some of the year's best animation offerings from the Greek scene. 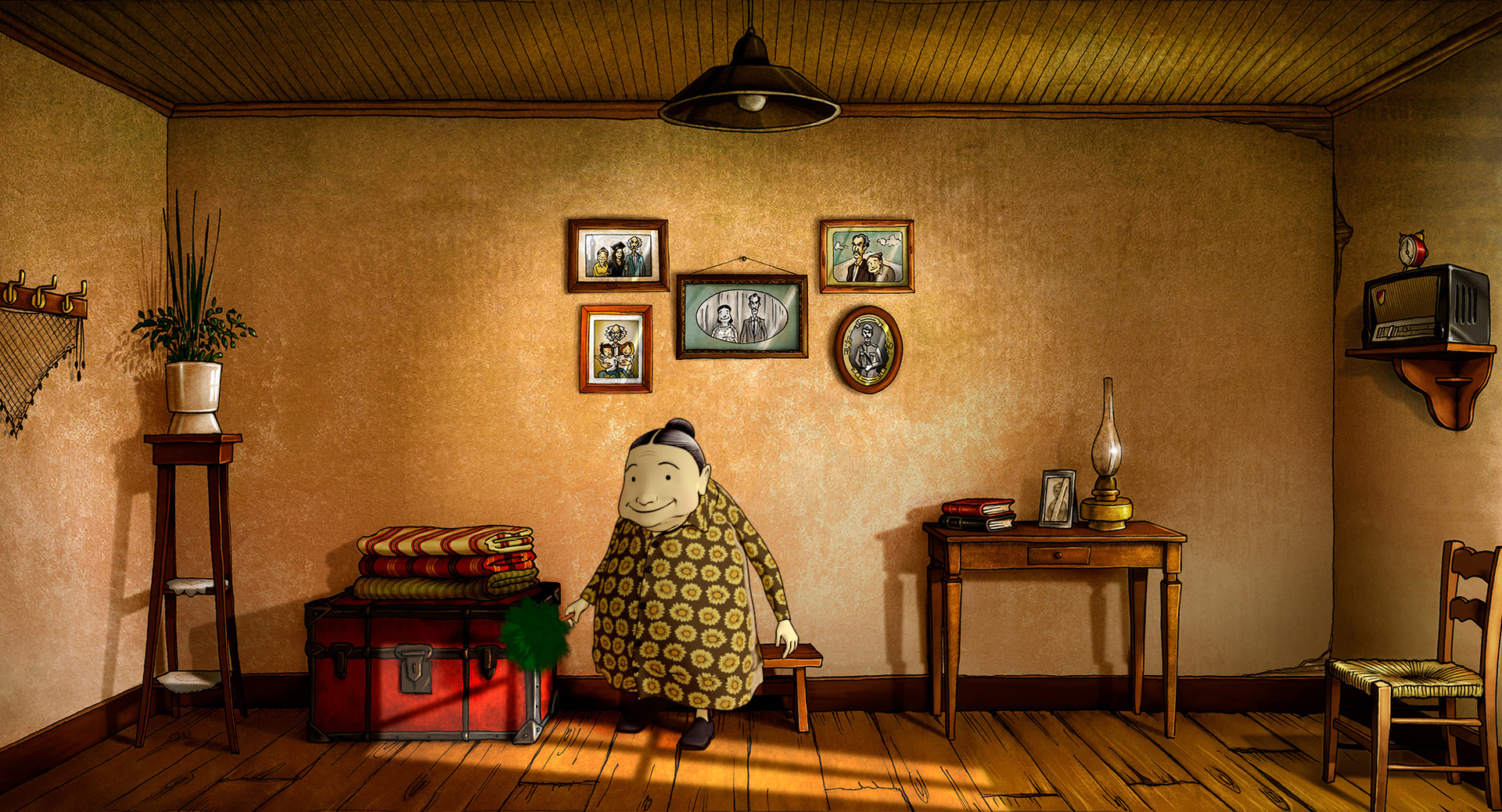 A Night at the Cemetery: Directed by Stelios Polychronakis

AnimaPride through 10 films, from Europe and USA to North Korea will present important aspects of the LGBTQ+ movement and topics such as homophobia, transgender rights, online dating, polygamy will be addressed. ​

Finally, within the #thisIsEU - European Values ​​section, six films will be screened, on the environment, immigration, gender equality, child poverty and violence against women.

Agora, the international meeting and trading event, is one of the most vibrant parts of ANIMASYROS as it connects the Greek animation community with international professionals offering opportunities through strategic collaborations. This year Agora launched a new strategic partnership with the renowned NEF Animation, a non-profit association dedicated to the research and creation of animated films.

ANIMASYROS is honored and pleased to host Peabody, Humanitas, NAACP and Emmy award-winning Chris Nee, the creator and executive producer of “Doc McStuffins” and developed and EP’d the hit series “Vampirina” as well as the recent series “We The People" for Netflix co-produced by Barack and Michelle Obama. Journalist, animator and music producer Nancy Denney Phelps interviews the award winning producer. The conversation with Chris Nee is held with the support of the US Embassy in Greece. 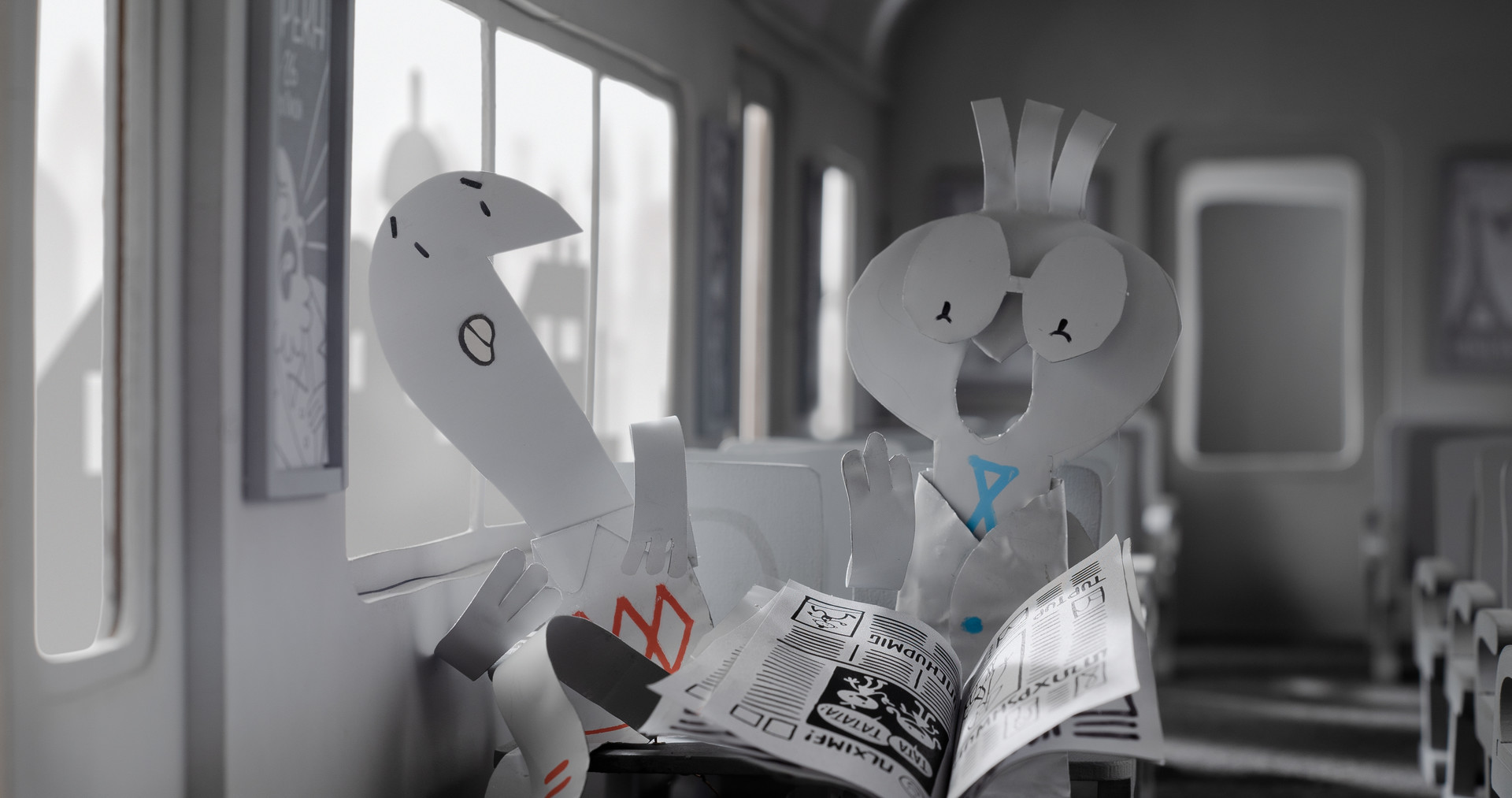 Moreover, internationally acclaimed animators and producers such as Joanna Quinn and Les Mills will present a masterclass based on their film The Affairs of the Art, nominated for this year's Oscars in the category of short animation, as well as the renowned French producer Olivier Catherin, who will introduce us to the production process of an animation film.

The winner of the Pitching Forum Agora Animasyros will be announced on 25 September at the Festival's closing ceremony and will be hosted for one month at the La Résidence Internationale de Fontevraud program to create a film with facilities provided by NEF. The pitch coaching workshop will be led by Xavier Kawa-Topor, Director of NEF Animation and Catherine Totems, Educational Director of the animation workshop, L’atelier des Sèvres.

All the Agora sessions will be broadcasted on the official channel of ANIMASYROS on Youtube. 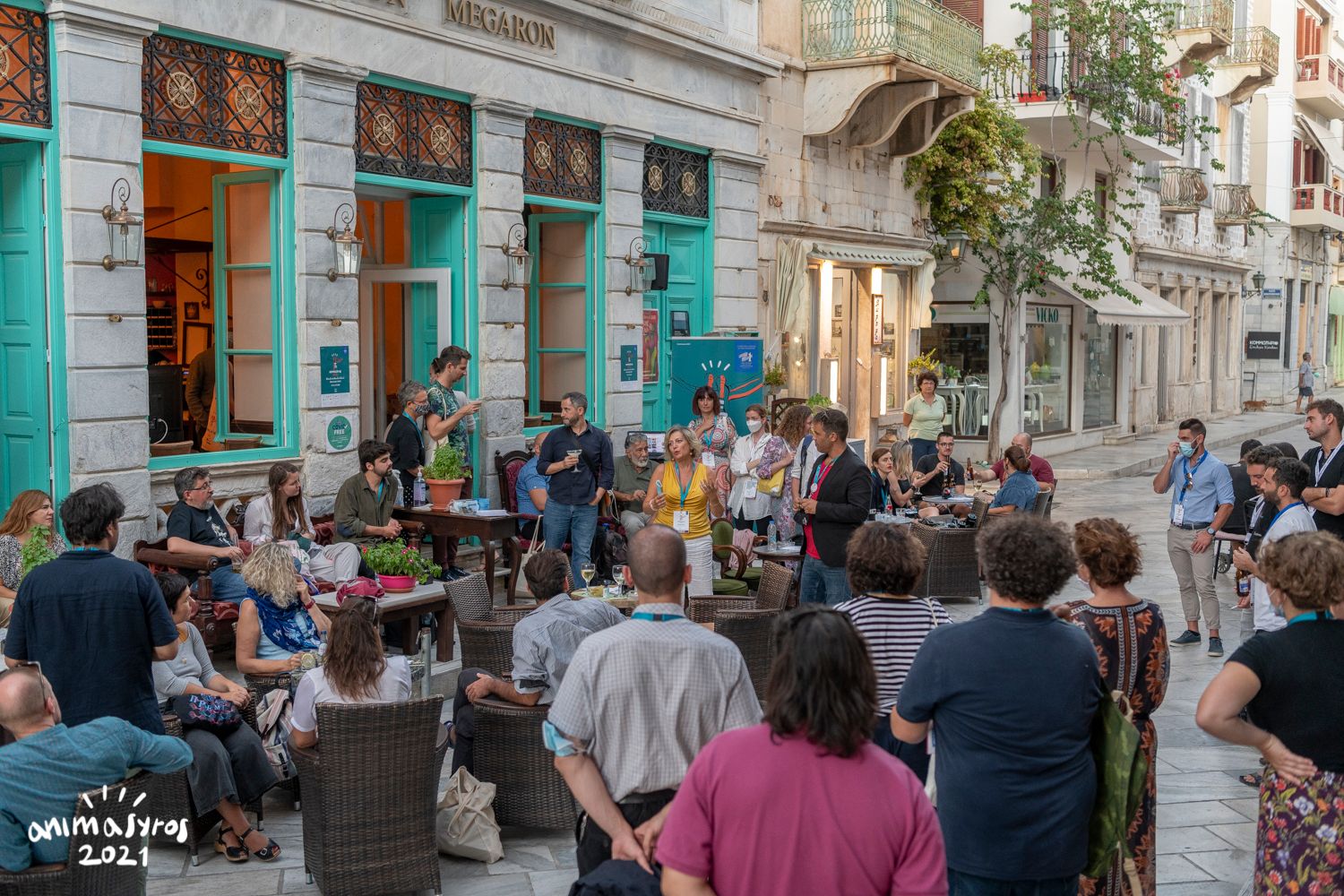 A key pillar of the Festival are the educational workshops aimed at children, teenagers, young professionals, the elderly and people with disabilities. This year, the theme of the workshops is based on the 100th anniversary of the Asia Minor Catastrophe and in this context, in collaboration with the Asia Minor Association of Hermoupolis, the participants are invited to be inspired by literature works, photographs, traditional music from Asia Minor, recorded and written testimonies in order to create animation films under the guidance of experienced instructors from Greece and abroad.

You can submit participation requests by sending an email to This email address is being protected from spambots. You need JavaScript enabled to view it. Workshops are free. 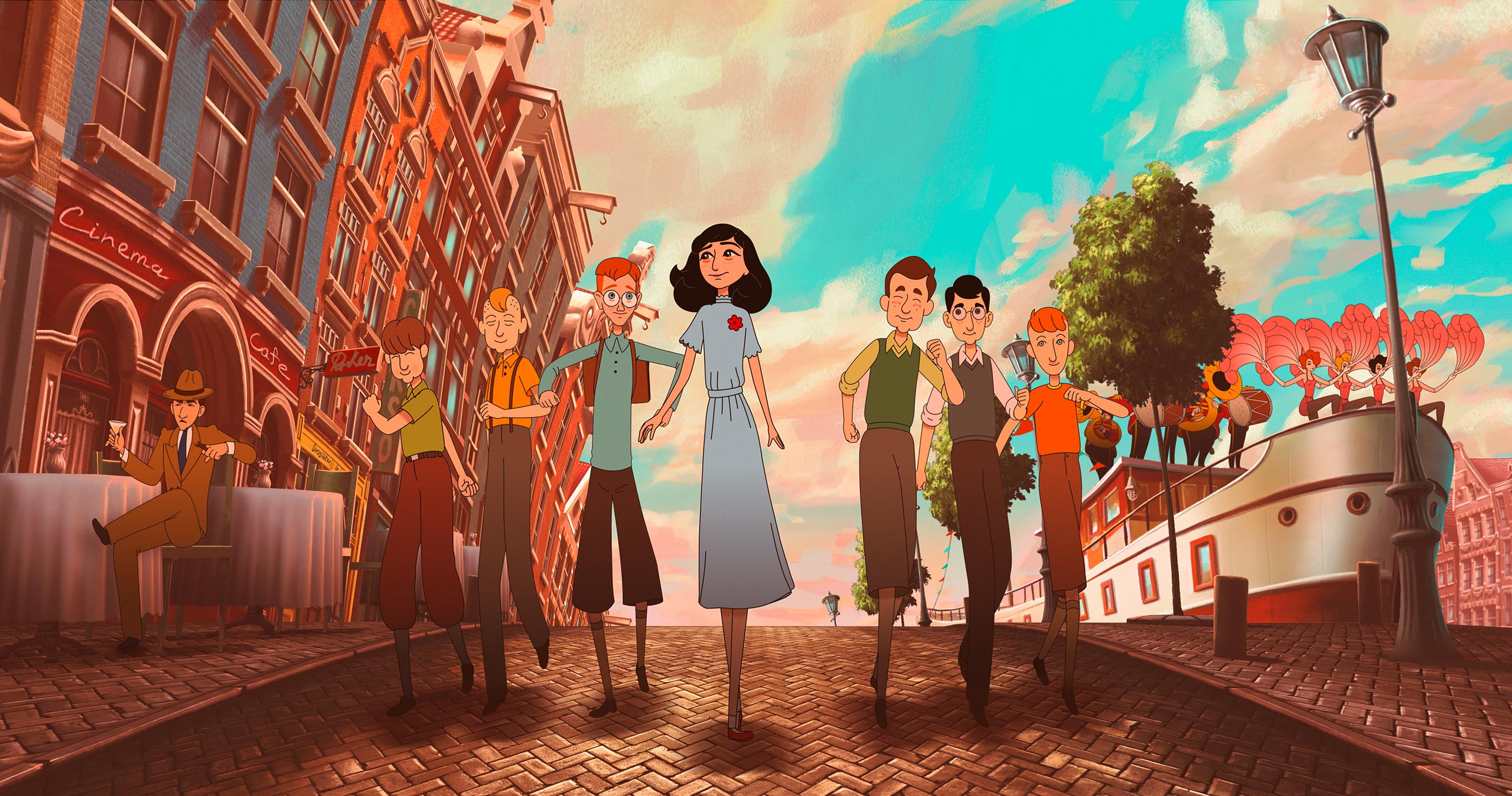 Where Is Anne Frank? Directed by Ari Folman

Εvents are free to the public and take place at the imposing Apollo Theatre, the Hermoupolis Cultural Centre, the University of the Aegean premises, the central Miaouli Square and various locations across the island of Syros.

Part of the screening program will also be available digitally on the website www.animasyros.gr, while the Agora sessions will be broadcasted on the official channel of ANIMASYROS on Youtube. The programme and the online screening schedule will be available online at https://live.animasyros.gr/ .You can download the entire festival programme here. 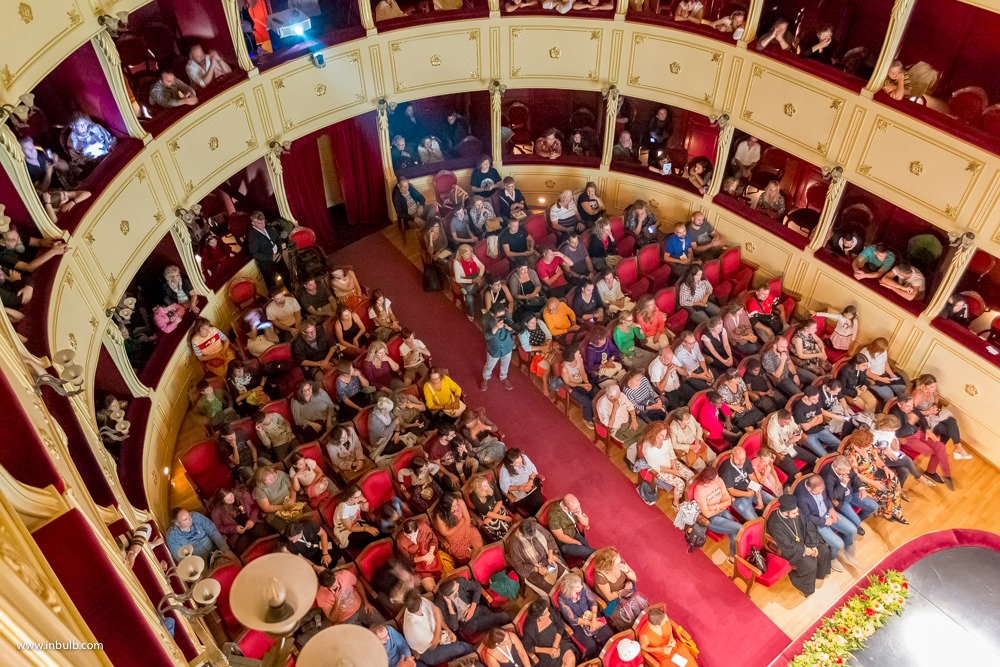