Analysis: How to Fix the Eurozone 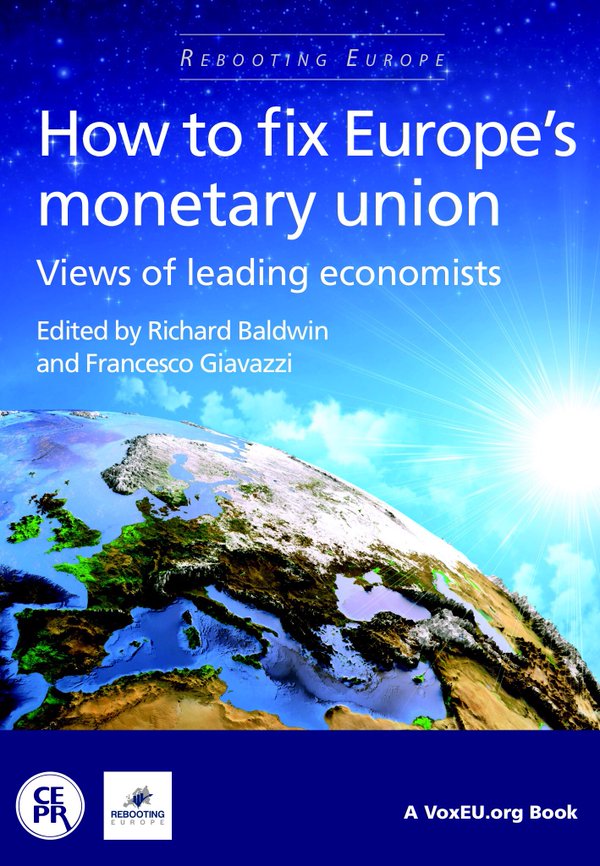 A new Centre for Economic Policy Research / VoxEU eBook How to fix Europe’s monetary union: Views of leading economists by Richard Baldwin & Francesco Giavazzi, argues that fixing the Eurozone is a job half done. The ECB’s resolve and the gradually improving macroeconomic performance are keeping the euro afloat for now. But this is accomplished by something akin to bailing the water out of the boat as fast as it leaks in. European leaders must very soon find permanent and coherent solutions to the Eurozone’s shortcomings.

The publication presents the views of leading economists hailing from a broad range of nations and schools of thought, in 18 chapters. The authors broadly agree on the list of things that needed to be fixed. These include: Completing the Banking Union; Breaking the ‘doom loop’ between banks and their sovereigns; Ensuring EZ-wide risk sharing for Europe-wide shocks; Cleaning up the legacy debt problem; Coordinating EZ-level fiscal policy while tightening national-level discipline; Advancing structural reforms for a better functioning monetary union.

The editors hope the publication will encourage solutions that could fix the Eurozone before the next crisis strikes Europe’s monetary union. They note that the Five Presidents’ Report was an important step in getting the debate going, but it seems to be unrealistically ambitious in the long run – essentially pushing all the way to something like a United States of Europe. At the same time, it is insufficiently ambitious in the short run – shying away from reforms that would require a Treaty change.

As one of the authors, Nobel Prize winner Chris Pissarides, notes: “There are certain conditions needed to make a common currency across diverse economies a success and the Eurozone is clearly not satisfying them.” Given the wide range of shocks arising from the current situation in Europe and beyond, now is not the time to relax. The job of fixing the Eurozone must be completed sooner rather than later.

A counterfactual history: How the euro zone crisis might have been handled

A different kind of read is offered by “How the Euro Crisis was successfully resolved”, by Barry Eichengreen and Charles Wyplosz, whose  counterintuitive title puzzles until one realises it is a work of counterfactual history on how the euro zone crisis might have been handled.

As Martin Sandbu puts it (To err is human, to restructure is divine, Financial Times, 17.2.2015) Eichengreen and Wyplosz spell out how things could have looked if all sides had realised Greece’s debt needed to be written down rather than bailed out in the spring of 2010:  “You’re not sure whether to cry or to laugh at Eichengreen and Wyplosz’s imagining of key policymakers making good choices rather than bad ones - but, in any case, you should be convinced that the restructuring route was both viable and would have left Europe in a much better place both economically and politically.”

As Eichengreen and Wyplosz put it: “In their historic 11 February 2010 statement, European heads of state and government acknowledged that the Greek government’s debt was unsustainable. Rather than ‘extend and pretend’, they faced reality. Lending Greece even more money would only render it even more heavily indebted and force it to undertake an even more draconian fiscal consolidation in order to maintain the fiction that it could pay back what it borrowed" […]

"Thus, by the end of 2012, following three years of turmoil, the Crisis was over. Growth in Europe had resumed. That growth enabled governments to begin narrowing their budget deficits, reassuring the markets of the sustainability of their debts. Aggressive easing enabled the ECB to hit its 2% inflation target. With prices rising by 4% in Germany, rebalancing within the Eurozone proceeded without forcing a disastrous deflation on countries like Greece" […]

"What is remarkable, in hindsight, is the combination of pragmatism and reasoning based on sound economic principles displayed by European leaders. Instead of finger pointing, they acknowledged that they were collectively responsible for the Crisis. Rather than allowing macroeconomic policies to be dictated by ideology and doctrine, they modified their policy stance in response to evidence. ”

Read more: Rebooting the Eurozone: Agreeing a Crisis narrative; Europe’s Orphan: The Future of the Euro and the Politics of Debt; Helmut Schmidt: Opposing the dominant narrative of the euro crisis

Reading Greece: Giorgos Markopoulos on Poetry as a Landscape of the Soul and the Poet as a Person Defeated by Nature