A policy paper titled “Greek Diaspora in an uncertain world” written by Othon Anastasakis and Antonis Kamaras, as part of the joint research project between South East European Studies at Oxford University (SEESOX) and the Hellenic Foundation for European & Foreign Policy (ELIAMEP) highlights research opportunities, involving research centers located both in Greece and abroad, that relate to the study of the Greek diaspora & homeland relationship.

According to the paper (published in April 2021) Greece’s fiscal crisis has energized its relationship with its diaspora in the last several years, after decades of decline, as well as reshaping the diaspora itself due to the massive crisis-driven migration. The fiscal crisis generated the third largest migration wave in Greece’s bicentennial history as an independent nation-state, of close to half a million, mostly highly educated individuals, who emigrated by and large to EU countries such as Germany and the UK. As a corollary, the crisis-driven migration wave put at the top of Greece’s political agenda the ways through which the diaspora can be induced to reengage with Greece via the institution of the expatriate vote.

Outside Greece, South East European Studies at the University of Oxford (SEESOX) has set up the Greek Diaspora Project in 2015, a research unit which sought to relate the wider diaspora and development literature to the Greek case.

We could add tther programs focusing of diaspora studies abroad, such as The Centre for Greek Diaspora Studies (CGDS), set up within the Hellenic Institute at the University of London, the Program in Hellenic Studies at Columbia University and the Modern Greek Program at the State University of Ohio.

Countries with significant Greek population and descendants [map via Wikipedia]

The paper proposes that collaborative projects jointly undertaken in Greece and abroad – such the one between SEESOX and ELIAMEP- can produce interesting multidisciplinary and comparative research on the diaspora and homeland relationship. Some examples of research subjects that can illuminate how such synergies can be very fruitful are:

All these research subjects relate to the host countries of Greece’s three leading diaspora communities worldwide and could to be complemented by additional research. Importantly, University departments and research centres located in Greece, such as the ones mentioned above, possess an irreplaceable expertise if we are to enlarge our comprehension of the diaspora & homeland relationship in the fiscal crisis and post crisis era. 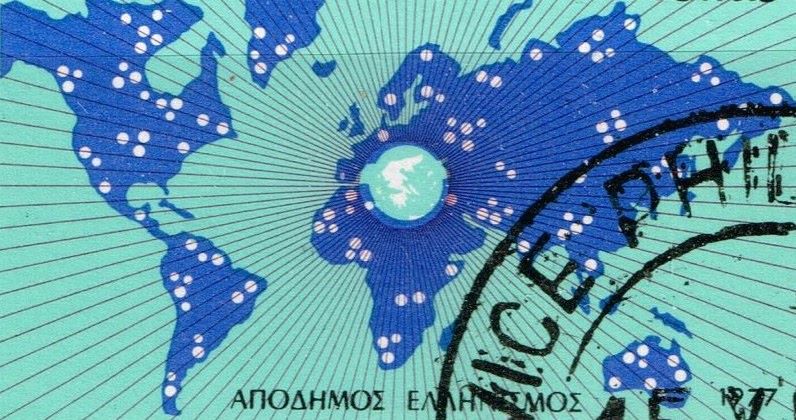 The papers goes on to add that as important as the comparative perspective is, it is imperative that Greek diaspora studies link up with leading research domains in Greece and indicatively, selects the five disciplinary domains where SEESOX and ELIAMEP, together with other research centres and university departments, located in Greece and abroad, can collaborate:

• In European Studies, the survey of the brain drain and gain phenomenon is inextricably connected with such issues as the EU’s freedom of movement and the debate on North-South transfers within the EU. The actual or potential impact of important diaspora communities in major EU member -countries and their relationship with Greece, such as the Greek community in Germany, also merits investigation from a European Studies perspective.

• In Security and Foreign Policy studies, the evolution of the Greek-American lobby is significant in terms of identifying sources of conduct of Greek foreign and national security policy while also being a factor that needs to be assessed in the interpretation of Turkish national security and foreign policy.

• In the study of Culture, and Religion, productive lines of inquiry can be pursued such as on Greek Orthodoxy in Greece and abroad, and how they influence each other; on values transmission from diaspora communities to Greece and vice versa; and on the state of governance of Greek language instruction abroad and its impact on the reproduction and evolution of Greek identity among diaspora communities.

• In Migration Studies, there are substantial opportunities in adding to the focus on in-migration the focus on out-migration particularly from a comparative South East European perspective, where we can build on the longstanding commitment, to Greece’s surrounding region, by Greek state university departments and research institutes.

• In Economics, well-developed research efforts on Greek export and Foreign Direct Investment-attraction underperformance can take on board the diaspora factor, in order to evaluate future trends in these two domains. Likewise, the thorough literature on Greek fiscal policy on taxes, social contributions and pensions is well-positioned to evaluate the feasibility and roadblocks on the way to a brain gain-friendly fiscal policy stance.

The opportunities for synergistic research between University centres and think tanks located in Greece and abroad, in satisfactorily addressing this crisis-driven transformation of the diaspora & homeland relationship, concludes the paper, are compelling and must be comparative and cross-disciplinary.