In Strasburg on January 13, Greek association Agkalia from the island of Lesvos received the Council of Europe’s 2016 Raoul Wallenberg Prize for outstanding achievements in providing frontline assistance to thousands of refugees irrespective of their origin and religion. 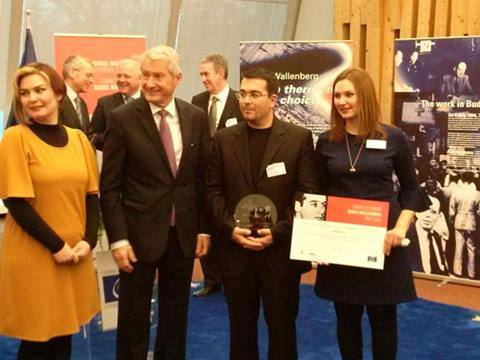 As Lesvos has become a European gateway for refugees, Agkalia has been providing temporary shelter, food, water and medical aid to people in need, assisting some 17,000 refugees and migrants since May 2015. Founded by Fr. Efstratios (“Papa-Stratis”), who passed away in September 2015, Agkalia has gained growing support as its devoted associates pursue the priest’s endeavour. Through its work to assist refugees, Agkalia has at the same time been promoting tolerance and human rights.

“As a small and flexible local organisation based on volunteers, Agkalia sets a leading example of effective action by European civil society on the burning global issue”, stated Secretary General Thorbjørn Jagland during the award ceremony. “Agkalia makes a real difference for the people who reach the island after a dangerous sea crossing. Its activities reflect the fundamental values of the Council of Europe and contribute to its work to promote and protect human rights in Europe and beyond.”

“Only humanism and tolerance can bring better days to Europe in this dark moment,” said the representative of the Agkalia Georgios Tyrikos-Ergas in his speech during the ceremony. “The European people, volunteers from so many nations who responded to our call for help set the example of how this can be achieved – through solidarity […] To all our kind compatriots that offer lessons of humanity, sharing their limited resources and courage with the refugees, to all the brave volunteers that stand their ground, to all Europeans that honour this union of people through their activism and humanism, to all in every part of the world that strive for peace and justice by choosing to love instead of hate, to all those that have helped us in every way, we dedicate this prize”.