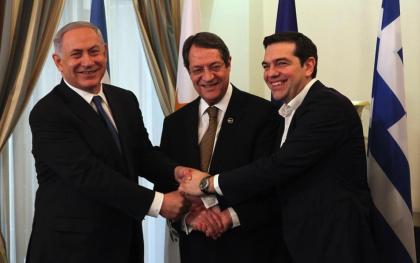 The leaders of Cyprus, Greece and Israel have signed a deal that aims to deepen their energy, security and tourism ties in the Eastern Mediterranean. The agreement, signed in  Nicosia last week by Cypriot President Nicos Anastasiades, Israeli Prime Minister Benjamin Netanyahu and  Greek premier Alexis Tsipras focuses on energy and the exploitation of the newfound natural gas deposits offshore Israel and Cyprus. The three leaders pledged to form a trilateral committee to study plans to build a pipeline between Israel and Cyprus and on to Greece for gas exports to Europe (EastMed gas pipeline) while they also discussed plans for an underwater cable to connect the electricity grids of the three countries (EuroAsia Interconnector).

The joint statement in Nicosia after the tripartite summit said the states’ cooperation would focus on seven areas -energy, tourism, research and technology, environment, water, migration and fighting terror. "Our states share the same values as well as the conviction that in order to effectively counter multiple challenges confronting us on a local, regional and international level, we must work collectively," Anastasiades said. This agreement comes on the heels of another tripartite agreement between Greece, Cyprus and Egypt, further upgrading Greece's role is as a factor of stability in the region.

Arye Mekel, Israel’s ambassador to Greece during 2010-2014, in his opinion piece for Haaretz, argues that this agreement marks the birth of a geopolitical bloc: the Israel-Greece-Cyprus axis. According to Mekel, Tsipras’ policy toward Israel is “surprising and impressive”: “Tsipras, whose left-wing SYRIZA party was very critical of Israel, is conducting a centrist policy both inside Greece and in foreign affairs, continuing to upgrade his country’s relations with Israel” and has even announced his desire to help solve the Israeli-Palestinian conflict. Mekel concludes that the Greek Prime Minster aims to establish that Greece has its own status in the east Mediterranean.