Greek Prime Minister Alexis Tsipras and his Turkish counterpart Ahmet Davutoglu met in Izmir on Tuesday (09.10) and signed a bilateral readmission agreement for migrants not eligible for international protection to be readmitted to Turkey after crossing into Greece.

“Neither Greece nor Turkey were the cause of the problems currently facing central Europe”, Greece's Prime Minister Alexis Tsipras said during joint statements with his Turkish counterpart Ahmet Davutoglu, in Izmir. Tsipras pointed out that “the Aegean must become a sea of peace, cooperation and stability," adding that Greece and Turkey are jointly pursuing a mechanism that will provide a legal entry into Europe, stop smugglers and people drowning in the Aegean. "We state together that what is happening in our sea is shameful for our culture. We must strengthen our relations, overcome mutual problems and build a better future for our people," he concluded. 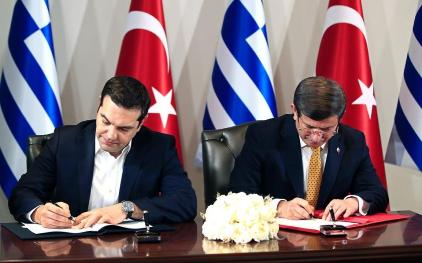 On his part, Davutoglu said that Greece and Turkey are sharing the burden of the refugee crisis, noting that Greece has been affected by the problem.  He noted the two sides are seeking solutions that will reduce migrant flows in the Aegean and end the dramatic situation at sea. "We will all have to share the burden of the refugee crisis” he said.

Tsipras was in Izmir for the 4th High-Level Cooperation Council (HLCC) meeting focusing on trade, transport and tourism, which ended with the signing of six bilateral agreements.  Among others, the Greek PM announced a new flight route that will link Athens and Ankara, a MOU of cooperation for the ports of Izmir and Thessaloniki, an agreement to build a high-speed railway line linking Igoumenitsa in western Greece to Istanbul, adding that he hopes Izmir and Thessaloniki will also be linked by ferry.  Separate agreements were signed on building flood defences at Evros and a bridge at the border crossing of Kipi. The General Secretary of Information and Communication, Lefteris Kretsos, also signed a cooperation agreement between Athens News Agency - Macedonian Press Agency (ANA-MPA) and Anadolu news agency. In parallel, a Greek-Turkish Business Forum took place, which brought together 36 Greek enterprises and institutions, mainly from the fields of tourism and real estate, food and beverages, construction and building materials, transport and logistics