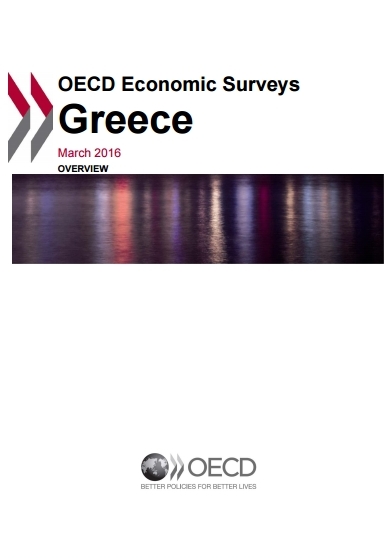 The Organization for Economic Co-operation and Development (OECD) has published its 2016 Economic Survey for Greece, which finds that the economy is gradually recovering from a deep recession and that significant structural reforms have been legislated. However, high social costs persist and this means stronger exports and investment are key to a sustained recovery.

More specifically, according to the remarks of the OECD Secretary-General, Angel Gurria, “The Greek economy is gradually recovering from the deepest recession in its modern history. The outlook is still very complex, but the policies and reforms promoted by Prime Minister Tsipras’ government are starting to bear fruit. It’s now time to refocus the reform effort to promote inclusion, social well-being and competitiveness. To achieve this, it is essential to improve policy implementation and increase the Greek ownership of reforms, but also, and most importantly, to achieve an agreement with Greece’s creditors to alleviate the burden of its massive and unsustainable public debt. This will require enlightened leadership, political courage, improved administrative capacities and effective multilateral cooperation.”

“The tide is turning for Greece,” stressed Gurria in his remarks. “In reality, the Greek economy shows significant signs of resilience, as a 2015 recession was smaller than anticipated. The real GDP contracted by 0.3 percent with the help of another record season for tourism, with tourists arriving in Greece reaching 24 million. Second, despite the fact that we expect a zero growth rate in 2016 (-0.1 percent), a carry-over from last year, growth is expected to gain dynamism in 2017 with a growth rate of around 2.0 percent. Third, the labor market shows signs of gradual improvement, with unemployment rates falling from 2013 highs. Greece still has the highest unemployment rate in the EU (24.6 percent), but it is now lower from May 2012. Fourth, a successful recapitalization of banks, a gradual lifting of capital controls and reforms to deal with a high rate of non-performing loans, have also helped to stabilize the banking system and will strengthen the restoring of confidence and credit. Completion of the first review of the ESM [European Stability Mechanism] program will further enhance confidence; ignite investments and exports that will support economic recovery."

The report underscores that, in order to help Greece recover from the profound social costs of the economic crisis, boosting economic growth and investment to create jobs, improving the stability of public finances and providing an effective social safety net are crucial. Tackling poverty and inequality must be urgent policy priorities, it adds. Among the recommendations are also public assistance programmes that would cost around 1.5 per cent of the country‘s GDP in order "to alleviate the social crisis." 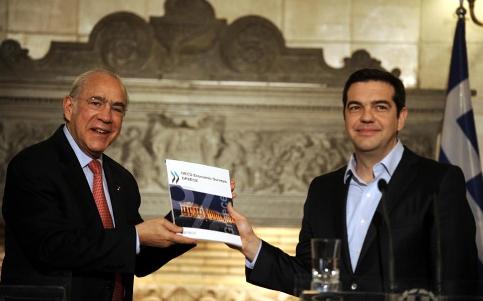 Gurria in Athens: Greece needs substantial support to deal with the refugee crisis

On Thursday (09/03) Angel Gurria visited Athens to present Greek Prime Minister Alexis Tsipras with the findings of the survey.  Gurria called the time of his visit to Greece crucial, adding that the OECD is glad to support Athens’ reforms program, while stressing that much work remains. He praised the government on dealing with these issues very effectively, but stressed that there is no margin for complacency. Gurría also commented that “the refugee crisis creates significant problems for the Greek economy and growth,"adding that Greece needs to receive substantial support to deal with this, as “no single country can address this challenge on its own."

“It is very important that throughout the year we had a very good cooperation” PM Tsipras said to Gurria, noting that after all those years of recession it is important that we are seeing signs of recovery.Tripras said that “we are very close to the completion of the first review that will give the signal for the start of serious discussions on debt relief”, further commenting on Twitter that “The OECD's report highlights the need, among others, to adopt policies that further social cohesion.”

Read more: One page summary of Survey (links to pdf)