The era preceding the Greek War of Independence (1821–1829) was a period of universal upheaval. The War of American Independence (1776-83), the French Revolution in 1789, Napoleon's invasion of Italy and the situation in Spain and Austo-Hungary troubled the status quo, so sacredly defended by the Holy Alliance.

But the Greeks were seeking not only their independence from Ottoman rule and oppression, but also a chance to clearly define their national identity and chose an orientation for the soon to be founded Greek independent state. This new nation-state, which resulted from the victories of a popular movement of mass mobilization, the first truly “national” war of Independence in the Balkans and the Near East (Lekas, 2005) was seeking a modern identity and a way outfrom past practices and rule. As described in the book “The origins of the modern state building in Greece, 1821-1828” by Nikiforos Diamantouros, the conceptualization of the modern state from the Greek side as a model based on liberal institutions and the experiences of the French Revolution and the American Struggle for Independence, although fitting true to the logic of such ventures (in the US, in France and Spain, Italy and Portugal from 1810 to 1820), it also differed from them, as it involved a rupture not only in the status level but also at a state level, since it would have to be built from scratch. Thus in Greece it meant the rupture with the model statecraft that was based in the absolute identification of power with the person that exercised it. 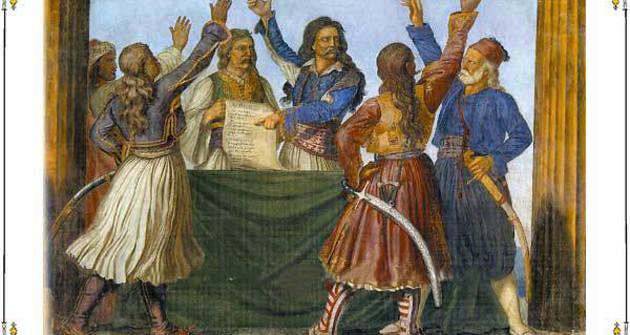 In fact, one of the first requests by the Greek revolutionaries was the integration with Europe: “Wanting to be equated with our European colleagues”, states the preamble of the historic “Declaration of the Independence of Greece”, a text infused with the democratic and liberal ideas of the Enlightenment and the American and French Revolutions. This text was written mainly by a team of liberal modernists, intellectuals and politicians who had knowledge of the content of the American Declaration of Independence and saw the necessity to institute to the consciousness of Greek society the principle of constitutionalism as the fundamental and necessary prerequisite of political stability.

The adoption of the first Greek Constitution took place in Epidaurus, at the 1st National Assembly, in January 1822. The Constitution comprised of 110 short paragraphs divided in “titles” and “sections”, and provided for the principles of representation and the division of powers. The “Administration” consisted of the “parliamentary” and the “executive” branch, both serving in annual terms and counterbalancing one another in the legislative process. The "Judicial" consisted of eleven members and was independent of the two aforesaid branches, although it was elected by them. 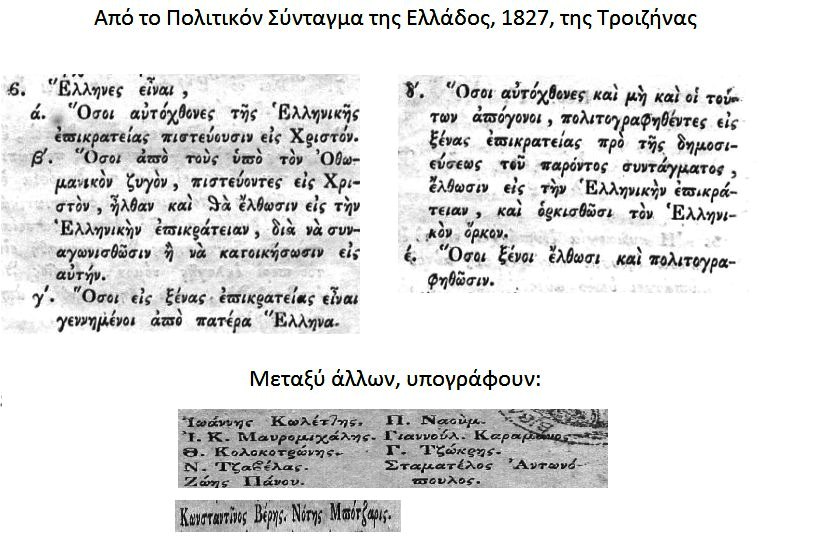 A year later, in April 1823, another assembly, the Second National Assembly, convened in the town of Astros, in Kynouria, Peloponnese, to revise the Provisional Constitution of Epidaurus. The Assembly named the Constitution the “Law of Epidaurus” in order to emphasize its continuity with the preceding Constitution. The new Constitution was more concise and technically to the point. The Assembly abolished the three local Constitutions and gave a slight advantage to the Legislative branch over the Executive given that the latter's veto power was reduced from absolute to suspensory. It made explicit provision for the formal precedence the Constitution should take over ordinary legislation and reinforced the protection of fundamental rights (Spyropoulos -Fortsakis, 2009) by improving the provisions on the protection of individual rights and democratized the electoral law. 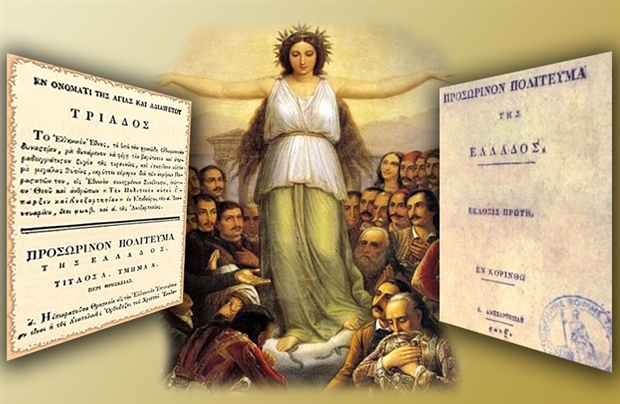 But the most liberal and democratic constitution of its time is the “Political Constitution of Greece” or else known as the Troizena Constitution, which allowed for the building of the new institutions, the formation of political groups and the imposition of mechanisms and strategies that gave answers to the pressing needs for constructing a modern, nation-state. It was the work of liberals, intellectuals and great minds that participated at the Third National Assembly that Convened in Troizena in 1827.  In fact, the new Constitution, declared the principle of national sovereignty and established an explicit separation of powers in order to overcome the problems of too many separate centres of power, without compromising the democratic and liberal character of the system of government (Spyropoulos -Fortsakis, 2009). In this respect, the Parliament, elected for a three-year term, was given the exclusive competence to exercise legislative function, while executive power was vested in the Governor alone, who also appointed the Ministers. The courts were independent and many provisions of the Constitution were devoted to the protection of fundamental rights and freedoms. The Third National Assembly unanimously elected Ioannis Capodistrias Governor of Greece for a seven-year term, aspiring to provide the country with a stable government, modeled on democratic and liberal ideas. For this reason it referred to the principle of popular sovereignty for the first time: "Sovereignty lies with the people; all powers derive from the people and exist for the people and the Nation". This fundamental declaration was kept intact in all Greek Constitutions following 1864.