Greece at the end of a difficult road? 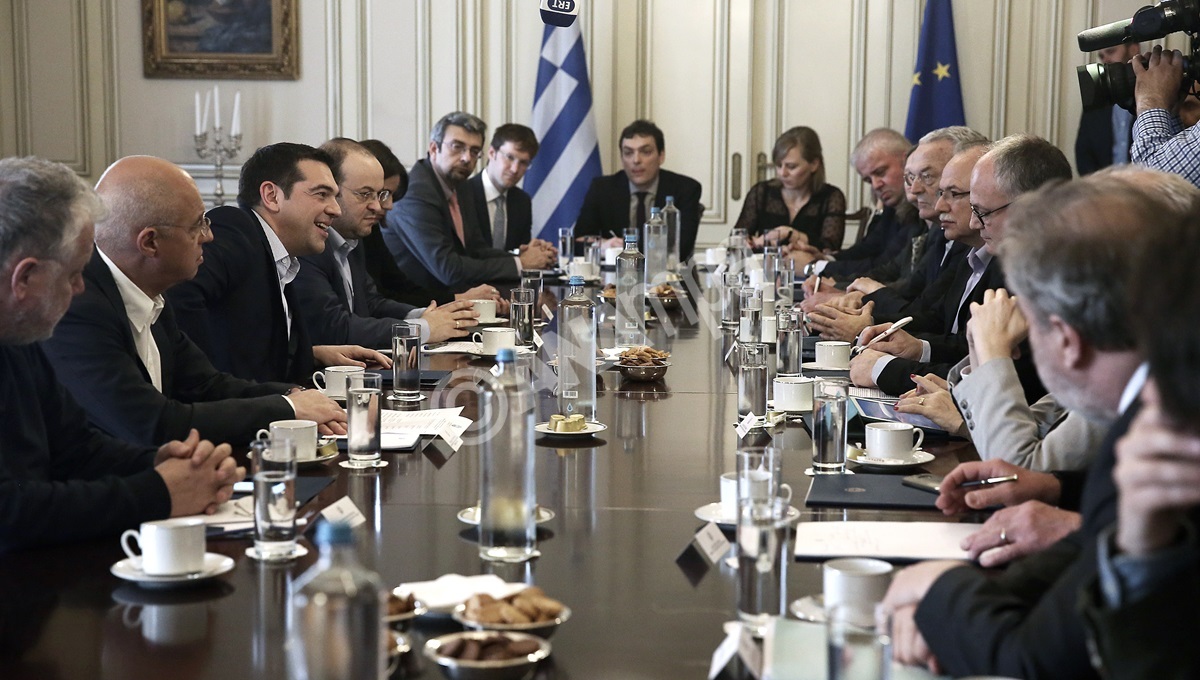 Greece is at the end of a difficult road and economic recovery is well in sight, Prime Minister Alexis Tsipras said during a meeting (30.3) with a delegation of the European Parliament’s Economic and Monetary Affairs Committee (ECON), headed by the Committee’s Chair, Roberto Gualtieri, who paid a two-day visit in Athens this week.

According to the PM’s office, the European Parliament’s involvement in the Greek program review will contribute to the protection of the European acquis and social cohesion in Greece, and increase the transparency of the process. Commenting on the policies followed in the last few years, Alexis Tsipras said these focused on the fiscal aspect of the crisis and not on the reconstruction of the country’s production model or the promotion of a sustainable economic model.

Achieving a timely agreement with Greece’s lenders on the country’s debt will open the way for attracting new investments, Finance Minister Euclid Tsakalotos told the delegation. According to Tsakalotos reforms in the pension system will serve the government’s short-term and long-term goals, while restructuring public costs in the next few years is also a main target, adding that it’s important for the country’s creditors to give a political signal that the government is implementing what has been agreed.

During a meeting with the same delegation Economy Minister Giorgos Stathakis expressed his confidence that Greek economy will return to growth in the second half of 2016. “A necessary prerequisite for the economy to enter a stable growth path is to complete the first program review as soon as possible, on the basis of a viable agreement that will ensure social cohesion and promote social justice”, the minister told the delegation. The meeting focused on the government’s plans concerning non-performing loans, on strategies to support health and education, on legislation to tackle corruption and simplify the public procurement system, the utilization of the “Juncker plan” and the gradual removal of capital controls.

Bank of Greece governor Yannis Stournaras received the delegation on Thursday briefing them on the state of the Greek economy and its prospects, as well as of the country's banking system and the mass of non-performing loans in Greek bank portfolios. Central bank staff highlighted the importance of a positive review of Greece's programme, and pointed to the opportunities that will arise once Greece is able to participate in the European Central Bank's quantitative easing programme, which will boost liquidity in the Greek market and strengthen growth.

State Minister: Conclusion of program review will show we can protect lower incomes

The government will agree with the institutions in the coming days on the final points on taxation reform in a way that will not hurt lower incomes or the possibilities of growth, State Minister Nikos Pappas said in an interview with private radio station Real FM on Thursday:  “The conclusion of the [program] review will prove that there’s a way to stay in Europe and protect the lower incomes and stop the destruction”, the minister was quoted as saying. Concerning the role of the International Monetary Fund (IMF), Pappas said that anyone who wants to change the agreement will have to, firstly, say it openly and convince European parliaments to change it.

In an interview to German Handelsblatt (29.3), the IMF chief economist Maurice Obstfeld, re-opened the possibility of a relaxation of the austere economic measures in Greece due to the refugee crisis. Obstfeld noted that although reforms  and the measures of fiscal austerity are necessary in the  "short term, there can certainly be some flexibility in the goals of the national budget” and that a haircut of the Greek debt by Greece's european creditors may also be necessary.

Finance Minister Euclid Tsakalotos has argued in an interview with Ta Nea daily (25.3) that IMF Must Adopt a More Moderate Stance on Labor Rights in Greece. Tsakalotos stressed that IMF should respect a country’s acquired social benefits and entitlements and it should look at the question of labor rights from a more socially sensitive perspective.  Tsakalotos also said that in the April 22nd Eurogroup the discussion about Greece will involve both the review of the new bailout program as well as the restructuring of debt.

“The Success of Greek Structural Reforms”

In an opinion piece in Project Syndicate last week Syriza MEP Dimitris Papadimoulis stressed that “Now that the Greek government has delivered on its part of the bailout deal, it is time that its European and international counterparts conclude the first review of the program. This will allow the government to proceed to the second stage: coping with skyrocketing unemployment and putting the economy back on the path to growth. Greece has several sectors that could provide it a comparative advantage within the eurozone, most notably the maritime sector, energy, tourism, agriculture, and social entrepreneurship.

The Greek economy may still be struggling; GDP fell by 0.6% in the last quarter of 2015, according to Eurostat. But predictions that the economy would shrink by as much as 4% last year proved to be unfounded. And because of the government’s reforms and the country’s highly skilled workforce, the European Commission predicts a gradual return to growth by the second half of 2016. It is time that investors acknowledge the progress being made; the wise ones will begin to return to Greece.”