Today, September 9th, Prime Minister Alexis Tsipras will be welcoming European leaders to Athens for the Mediterranean EU Countries' Summit.  "Our goal is to develop a new European vision that can address the common economic, migration and security challenges facing both individual member states and the EU, as a whole”, wrote Alexis Tsipras in his Facebook page (Alexis Tsipras Intl).

In addition to the Greek prime minister, the meeting will be attended by Cyprus President Nicos Anastasiades, French President Francois Hollande, Italian Prime Minister Matteo Renzi, Maltese Prime Minister Joseph Muscat and Portuguese Prime Minister Antonio Costa, while Spain's acting PM Mariano Rajoy will be represented by the country's State Secretary for the European Union Fernando Eguidazu. Introducing a Mediterranean perspective into the European Union's agenda and developing a new European vision for dealing with joint challenges relating to migration, security and the economy are the two main goals of the Summit which is taking place  ahead of the informal European Council in Bratislava on September 16.

“It is now common knowledge that Europe is at a critical crossroads. Economic stagnation, social cohesion problems, the rise of Euroscepticism and isolationism, the strengthening of far-right populist phenomena, are issues that we cannot bypass in a serious debate on the future development of European integration. In such a debate, Europe’s Mediterranean countries can and must raise their voice. The way to have a bigger say is to seek a common approach and common positions. Having that in mind, we turned to the leaders of France, Italy, Spain, Portugal, Cyprus and Malta, for a first meeting in Athens. I believe that regardless of the political origin of each of us, there is ground for joint action.

There is a need to give new impetus to growth and productive reconstruction, to address critical problems of social and regional inequalities, promote peace and stability solutions in our region, to have a single, humane and effective management of the refugee crisis. You realize that these are not only problems of the countries that will meet in Athens. These are problems related to Europe as a whole. Therefore, apart from ways to strengthen our cooperation, we explore the possibility to enrich our common positions on the European agenda. I have every reason to be optimistic that the Euro-Mediterranean meeting in Athens will be productive and will lead to positive results not only for us but for the future of the EU.”

In another interview with French newspaper Le Monde (8.9.2016), PM Alexis Tsipras said he expected the Greek economy to return to growth in 2016 and expand by 2.7 percent next year but that the lack of debt relief acted as a brake on the recovery. "The recovery is slow, in particular because we don't see the necessary generosity from our partners on the issue of debt relief," he told Le Monde. Tsipras said it was time for Europe to give a signal on the issue and that it could not wait until after Germany's federal elections due in September 2017.

PM Tsipras underlined that “We’d better have a European Germany, strong and democratic than a German Europe or a Germany that acts as a savings bank with excessive budget surpluses..It is time for Europe to signal the exit of the crisis for the Greek people, but also to restore confidence in the financial markets. It is not at all about a confrontation with Germany…”

PM stressed that “it is true that we have been the black sheep of Europe for quite a while. But, I think, our partners have understood that the Greek experiment should not be made elsewhere in Europe. Our partners also understood that the crisis is not exclusively Greek, but European, and that Greece is a pillar of stability in a very unstable region. There are problems in Turkey, the crisis in Syria, Libya ... We are a guarantor of European security in our region…”

Towards a closer cooperation in Southern Europe

Italian Foreign Minister Paolos Gentiloni told the Athens-Macedonian News Agency on Thursday, in an exclusive statement on the sidelines of the Conference on Security and Stability in Rhodes (8-9.8.2016). Gentiloni also noted that every European country had to share in the commitment for the reception of refugees and "not raise a small wall at its borders." Countries such as Greece and Italy, that were now first reception countries, should not see the rest of Europe stand apart, as though the issue concerned only one or two countries, he added.

According to some observers what brings the countries of of European South together is the aim to strategically change the course of events in Europe and stimulate sustainable growth. Already on the sidelines of the last EU summit (28-29 June), Tsipras and his Italian counterpart Matteo Renzi discussed the possibility of setting up an “Alliance of Europe’s South” to push for a pro-growth agenda, while in April, Tsipras and his Portuguese counterpart Antonio Costa, both elected on anti-austerity platforms, signed a joint declaration claiming that EU austerity-driven policies are “wrong”. Greece and Italy are also disappointed with the stance of their partners in North Europe on the migration crisis. 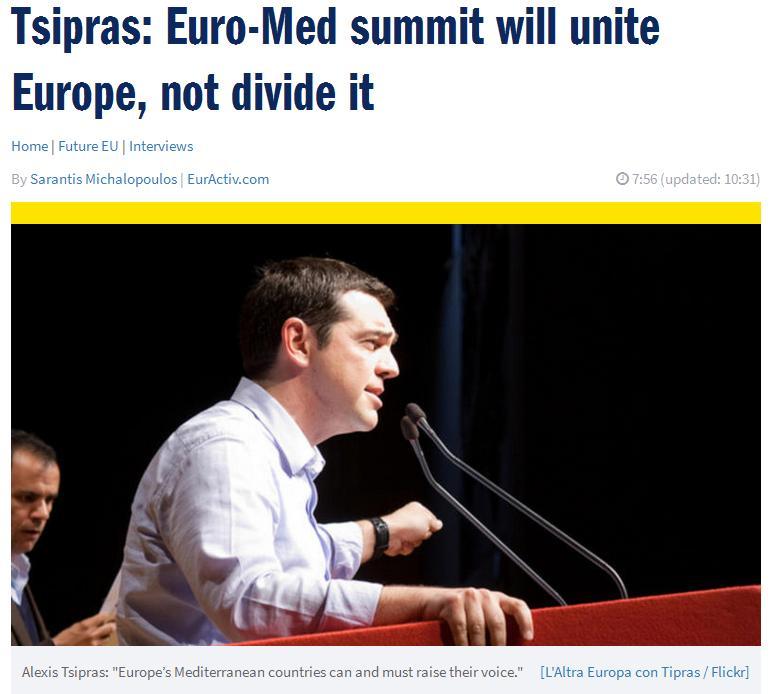