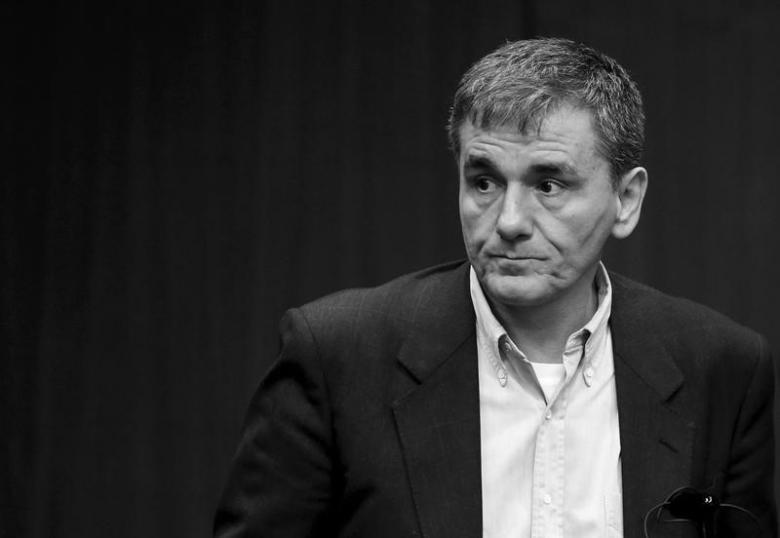 Europe needs a new model of economic development that will be “fairer, more social and more participatory”, Finance Minister Euclid Tsakalotos said during a keynote speech at an event organized by the European Investment Bank (EIB) in Luxembourg on Wednesday. “The Greek government’s aim is for Greece to return to growth but to a sustainable growth,” Tsakalotos said, adding that to achieve this, there must be a fairer distribution of profits to employees and to the periphery, but also a more democratic control of political decisions.

Tsakalotos started his speech by criticizing the eurozone’s mode of operation, saying that even with the European Central Bank’s (ECB) loose monetary policy it is mostly the northern European countries that benefit and not the southern that needed it most. In the same way, he said, to achieve a balanced recovery a country needs investments which will support mainly small and medium-sized businesses which are currently having a difficult time accessing funding from commercial banks. “EIB’s role in this is paramount,” he noted and hailed the recent decision by European Commission President Jean-Claude Juncker to boost the funds available through the Juncker package.

He also clarified that for Greece to attract investments, it needs a deal of its debt as soon as possible. “Investors are waiting for political decisions. If these come in five years, they will invest in five years,” he said.

After a meeting with the head of the European Stability Mechanism (ESM), Klaus Regling, and the European Investment Bank (EIB) president, Werner Hoyer, in Luxembourg, Tsakalotos told journalists that he discussed with Regling the issue of debt relief on which the head of ESM will brief the next EuroWorking Group (EWG). He said officials are now discussing short-term measures which will have to be implemented during the duration of the bailout program. Tsakalotos also said the implementation of all the prior actions demanded by Greece’s creditors is expected to be completed before the next Eurogroup on October 10 and that the remaining three measures will be completed within the next few days.

In an interview with CNBC, Economy Minister Giorgos Stathakis talked about the next steps for Greece and the possibility of accessing the ECB's quantitative easing program and expressed his optimism for the timely completion of the second evaluation. Stathakis stressed that “everybody expects that with the second review QE might be in the picture particularly if we get the debt deal until Christmas. So, those are the facts… the second review is directly related with the debt – that's what the schedule is all about that we have by Christmas to have completed both. So the optimism lies on both issues having a deal rather than getting some deal on the debt at a later that stage.”

Greek parliament approved with 152 votes on Tuesday 29.9 a bill on the prior actions that are demanded by the country’s lenders to unlock 2.8 billion euros of its loan aid. SYRIZA and ANEL voted in favour while all the other parties voted against with 141 votes. During the debate preceding the vote, Prime Minister Alexis Tsipras said (that) he expected a positive outcome to discussions on debt relief for the country this year.

European Commissioner for Economic and Financial Affairs Pierre Moscovici said in Politico’s Morning Exchange Live (27.9) he was hoping for deal on Greece that would include its debt and the participation of the IMF in the Greek programme by the end of the year.

An International Monetary Fund annual review published on Friday 23.9 (Greece: Staff Concluding Statement of the 2016 Article IV Mission) said  that Greece needs substantial relief to render its debt load sustainable and help set its economy on a recovery path. Debt relief must be calibrated on credible fiscal and growth targets, and noted that current primary budget goals beyond 2018, which exclude debt servicing costs, are unlikely to be reached. Greece is at a crossroads, and bolder efforts are needed to address its remaining key challenges:

“Greece requires substantial debt relief calibrated on credible fiscal and growth targets . Despite very generous debt relief from private and official creditors, debt has continued to rise, reaching unsustainable levels. This reflects significant shortfalls between economic outcomes and Greece’s ambitious targets under its past adjustment programs. The authorities’ current targets remain unrealistic, in that they still assume that Greece will attain and sustain primary surpluses of 3½ percent of GDP for many decades—despite double-digit unemployment rates until the middle of the century—and at the same time achieve high growth rates. In this context, it cannot be assumed that Greece can simply grow out of its debt problem. Further debt relief will be required to restore sustainability, going well beyond what is currently under consideration, and it should be calibrated on realistic assumptions about Greece's ability to generate sustained surpluses and long-term growth.”