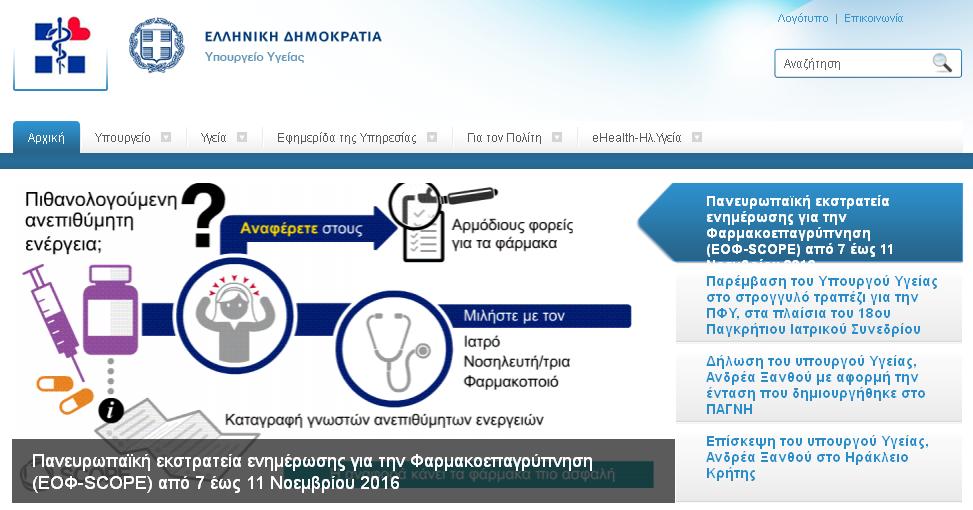 Fundamental vision of the reform efforts made by the Greek Ministry of Health, is the universal health coverage of the population, the provision of qualitative health services according to the needs, through community based  primary health care,  holistic, people-centered approach and  emphasis on health promotion of the community and  vulnerable groups, such as the disabled, refugees, Roma, etc. Cornerstone of the strategic management  of current challenges, is the reorganization of the healthcare services around a modern primary care model.

Ministry of Health has put forward a 100 actions plan for universal coverage to enhance timely reform of the health sector in order to:

The philosophy and structure of this newly introduced system is in direct connection with the international best practices, the WHO guidelines - with whom the Ministry of Health has worked closely in the preparation of the reform plan - and the overall direction of the European Union to target national Health Policies in community-based health care services.

Greece, with support from the WHO Regional Office for Europe, has embarked on a two-year initiative as part of the country’s ongoing large-scale health sector reform. The second phase of the “Strengthening capacity for universal coverage” (SCUC2) project supports Greece’s move towards universal health coverage and will focus specifically on providing universal access to health services; establishing transparent, inclusive and modernized health governance; and ensuring fair and sustainable health financing. The SCUC2 initiative was officially launched at the Ministry of Health in Athens on 21 September 2016 and follows an earlier six-month first-phase project, also supported by WHO/Europe, to develop a framework for rolling out the primary health care network in the country.

The main priorities for the SCUC2 project are developing the primary health care network and addressing public health issues. The initiative will also assist in evaluating emergency health care services, optimizing the use of technologies, reducing out-of-pocket payments and improving central procurement mechanisms. It will continue to facilitate health policy dialogues with stakeholders. 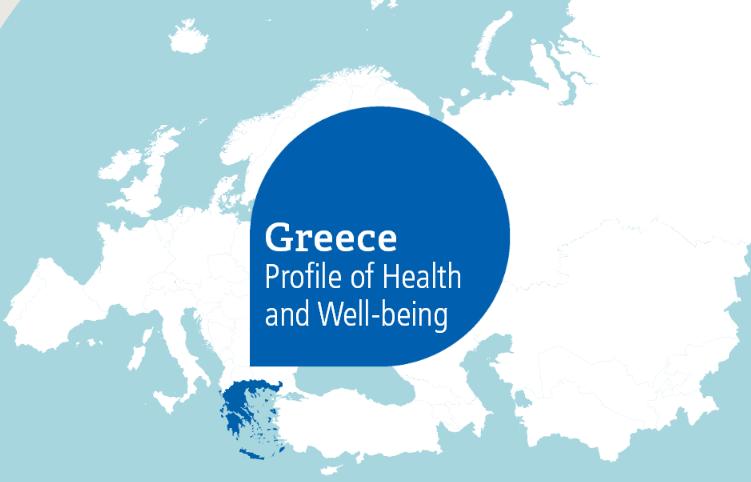 Greece - Profile of Health and Wellbeing

Greece’s progress towards achieving the overarching targets of Health 2020, the new European health policy framework, is described in a recently published WHO report (Greece. Profile of health and well-being (2016).

The strict income policy and the drastic cuts on public expenditures employed over the last five years have, as expected, negatively influenced GDP growth. GDP shrank by 8,4% in 2011, 7,6% in 2012, 5,5% in 2013, 1,5% in 2014 and 1,3 in 2015. During 2011, unemployment levels reached 17,7% and continued to increase rapidly, as a result of the generalized crisis of the Greek economy and of the fiscal consolidation measures taken. This increase continued or remained high at 25,3% for 2012, 27,9% for 2013, 26,4% for 2014 and 24,8 for 2015. According to the latest figures (2nd quarter 2016) unemployment in Greece is around 23,2%, with the number of unemployed and inactive population exceeding 4m people and Greece ranking first in unemployment in the Eurozone. Thus, as a result of both unemployment and the general economic situation, a significant part of Greek society is at risk of poverty and social exclusion.

The Greek health system (National Health System, established on 1983 and aiming to achieve full and integrated coverage and access to health services) is curative-oriented. No referral system has been established and the network of public health services is underdeveloped. It is also characterized by a high density of physicians, low density of nurses and high hospitalization rates. Total health expenditure is in line with the EU15 average, but the share of out-of-pocket expenditure is very high. Since 2009, the Greek economic crisis has negatively affected the health status of the population. Notably, the numbers of infant and maternal deaths have increased, as have suicides and homicides. As a result of the ongoing economic crisis progress towards and achievement of Health 2020 goals might be jeopardized unless decisive proactive measures are taken soon.

The socio-economic challenges Greece faces are compounded by rapid ageing. The proportion of people over 65 is growing rapidly and currently amongst the higher in the EU, while fertility is considerably lower than in other European countries and crisis-related emigration constitutes an added stress. The Greek health system is ill-prepared for these demographic changes. During the last three decades Greeks, particularly adults and the elderly, have not benefited to the same degree as other European countries from improvements in living conditions and health care. Life expectancy at birth in Greece is still in line with that in the rest of Europe. Up to the end of the 1990s, however, Greek men could expect to live longer than their EU15 counterparts: they have since lost this lead. Greek women had the same life expectancy at birth as in the EU15, but started lagging behind as of the mid-1990s. Death rates are reducing, but at a slower rate than in the 15, and in many cases, at a slower pace of reduction than in the whole of WHO’s European region. For cancer, mortality rates in Greece are higher now than in 1970, in contrast to the falling rates elsewhere in Europe and despite some recent improvements. The divergent trends are particularly evident for circulatory diseases. 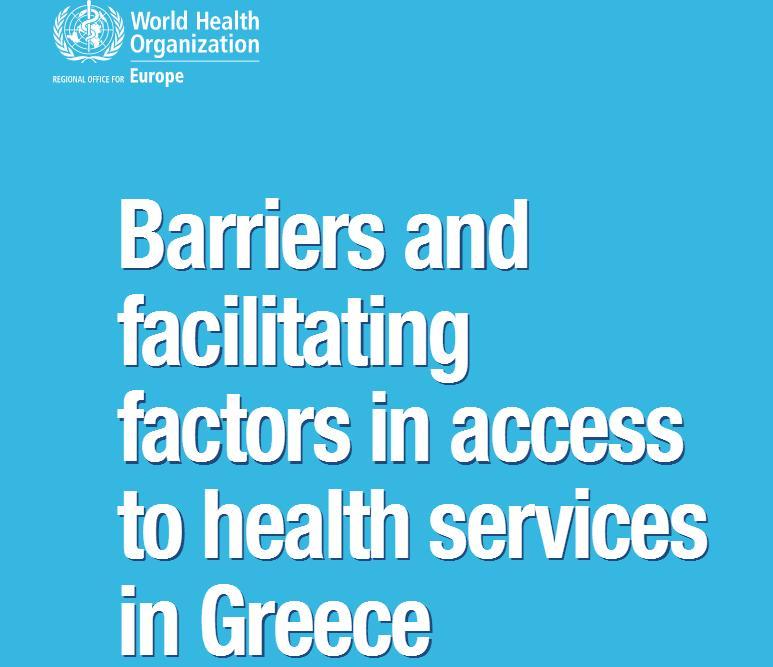 Before the crisis the level of health expenditure in Greece could mask the distortions in health care delivery. Since the economic crisis hit the country this is no longer possible and the structural problems of the sector have become visible to all. Greece spends 9.1% of the country’s GDP on health, a proportion comparable to other OECD countries. In absolute terms, however, health spending has fallen; it is now considerably lower than the European average; moreover, the share of expenditure paid out-of-pocket at point of delivery is exceptionally high, while formal out-of-pocket payments – fees, co-payments, diagnostics, medicines – are compounded by a high prevalence of “informal payments”. This has acted as a deterrent for timely uptake of care, particularly for the 2.2 million uninsured Greeks. Private spending in Greece constitutes a particularly high proportion of total health expenditure: about 36% compared to an EU average of 24-25%. This is particularly worrisome because much of that expenditure is constituted by unregulated out-of-pocket payments. The resulting supply-induced overconsumption and overcharging contribute to the overall inefficiency of the Greek health system, and to hampering access for those in need.

Health care services have been fragmented and are essentially supply-driven with considerable perverse financial incentives towards irrational overconsumption, from use of pharmaceuticals, to excessive caesarean sections (currently around 70%) or high prescription of CT-scans. Generalist Primary Care has all but disappeared in the last decades – health care delivery relies exclusively on hospital and specialised care, with a very large and unregulated private sector. The misalignment of payment incentives it has pushed the system towards overinvestment in heavy equipment, which in turn has led to comparatively high uptake. The case of MRI units and CT scanners is exemplary: Greece has respectively the second highest and the highest population ratio in the OECD. As expected this leads to the fifth and second highest number of examinations per population.The unregulated and profitable market for specialist care has fuelled the production of an oversupply of medical specialists. The predictable effects of this combination of distortion and oversupply are: supply-induced demand, with patients shopping for specialised care and induced irrational consumption; and competition for clients, with specialists competing in a primary care market that is largely dominated by an unregulated private sector. For example, Greece has the highest consumption of antibiotics, with the fourth highest proportion of expensive antibiotics in Europe. The overconsumption and oversupply of specialists contrasts with poor performance. Despite among record population ratios for RX equipment, radiologists, gynaecologists and surgeons, screening for breast cancer and colorectal cancer lags behind many other European countries. 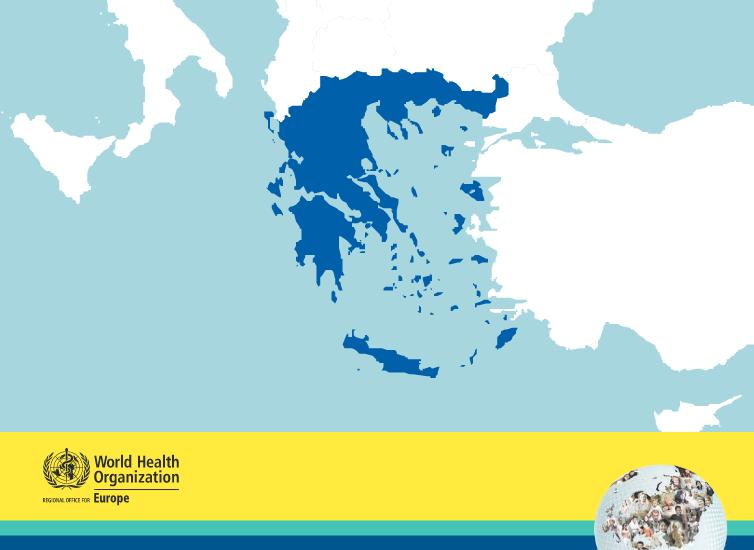 The Government’s strategy* to tackle the above mentioned issues of the Greek health system is defined by the below three axes:

Universal health coverage will be of a preventive, curative and rehabilitative character - reorganised around a modern primary health care system of local primary care networks of family medicine teams. These are to be responsible and accountable for a comprehensive range of people-centered care and coordinated with a backup of both hospitals and specialist ambulatory care (clinical specialities, referral mental, occupational and public health). At the centre of this is the roll out a country-wide network of high quality primary care units, that will constitute the entry point for patient management and care coordination around which the whole health system with specialised and hospital care is re-organized.

In February 2016, Law 4368/2016 provided a framework for moving towards Universal Health Coverage while the joint Ministerial Decision 25132/2016 (“Regulations to ensure access of the uninsured to the Public Health System”) has guaranteed provision of health care services to uninsured people and vulnerable social groups, defined the eligibility criteria, the process of accessing care and the benefit package. The same Law secured a steady inflow of funds from National Organization for Healthcare Provision (EOPYY) towards Health Regions exclusively for Primary Health Care services.

The Government intends to progressively eliminate the out-of-pocket payments at point of delivery, particularly of the crippling under-the-table payments. The Government will establish the institutional mechanisms and capacities for modernised, sustainable, and inclusive sector governance by Ministry of Health, Regional health authorities and the major systemic stakeholders.

Key areas in which progress has to be made include: making the organisation of care more responsive to needs and expectations by giving more voice to users and health workers, and by empowering regional structures in licensing and management of service delivery; underpinning this with a pharmaceutical policy that gets better value for money and improves quality and access; a reform of health workforce policies and workforce education to prepare the workforce for the future; revising the information architecture using the possibilities of systematic use of IT to make information available in real time, transparent and accessible to authorities, academia, civil society and to all citizens.

The government will establish the institutional mechanisms and capacities for fair and sustainable financing of universal social health protection steered by a strong Ministry of Health that uses real time strategic intelligence and information for managing the whole sector, public and private. It will eliminate “catastrophic” and impoverishing out-of-pocket expenditures and undue financial obstacles to uptake of care, whilst correcting system inefficiencies and containing costs. Financing of health care will pool both insurance-based and tax-based funds, replacing Out-of-Pocket payments with pooled funding whilst containing total health expenditure in GDP terms. 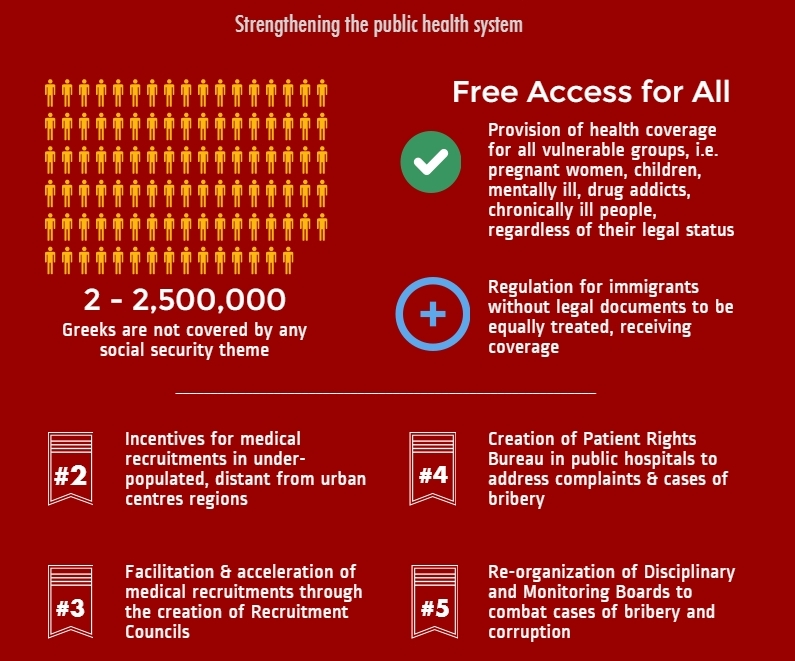 The necessity of Primary Health Care

The Government’s strategy aims at the reorganisation of health care delivery around a modern primary health care system:

It is the intention to replace a doctor-centered system with one that is people-centered, to move from a specialist & hospital-centered architecture of care to one built around primary care. People-centered primary care has the best potential for improving effectiveness and efficiency while responding to the expectations of the population. It has a major role to play in mitigating the consequences of inequalities and social exclusion.

The alternatives to primary care are clearly not sustainable and primary care is associated with lower total costs of health services, possibly partly because of better preventive care and lower hospitalization rates. The main motor is a better match between the needs and expectations of the client population and the supply of services. Investment in Primary Health Care based policies is associated with adequate access to care, better quality of practice and better levels of health.