Foreign Minister Nikos Kotzias: We want a solution to the Cyprus issue 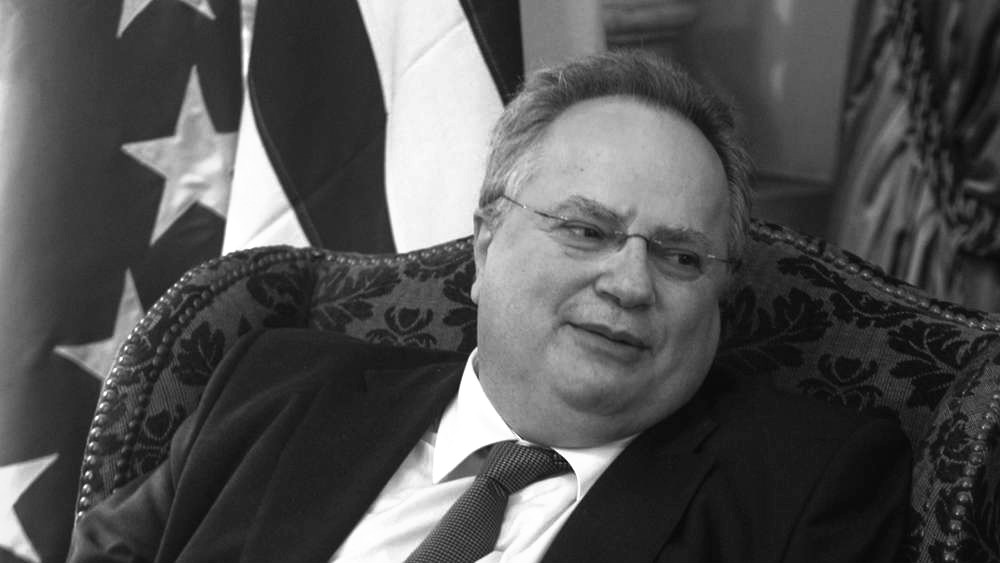 Foreign Minister Nikos Kotzias in an interview with the German news agency DPA (Deutsche Presse-Agentur) on Saturday (21.1.2017) pointed out Turkey's responsibility in solving the Cyprus issue stressing that "If we want to solve the Cyprus problem, we must address its causes: The problem is the illegal occupation of the northern part of Cyprus":

DPA: In recent months, intensive talks have been held between the involved sides. What is Athens pursuing?

FM Kotzias: We want a solution to the Cyprus issue. But what's the problem? The problem is the occupation of the northern portion of the island by the Turkish army. We need a solution that ensures maximum security for the Turkish Cypriots, but also provides the maximum possible security for the Greek Cypriots. Cyprus must be a sovereign state, a member of the EU and the UN. So the Turkish army will have to leave. Turkey will not be allowed to have any right of intervention. And the system of guarantor powers will have to be eliminated.

DPA: How can this happen? How can anyone guarantee the rights of both communities?

DPA: How much flexibility can you show? How far can you move from your initial position? Because the other side, Turkey, says it will never withdraw from Cyprus.

FM Kotzias: If we want to resolve the problem, we have to do away with its causes. Otherwise, what are we talking about? The problem is the illegal occupation of the northern section of Cyprus. I hope Turkey will understand that it is also in its interest for the Cyprus problem to be resolved. Because so far Turkey is combining its desire to protect the Turkish Cypriots with its geopolitical aspirations in the region. But we want to resolve the Cyprus issue and not deal with Turkey's geopolitical strategy, which isn't the subject of the negotiations.

DPA: And the Turkish Cypriots? How can they feel secure?

FM Kotzias: The Turkish Cypriots will have full political equality. They will have a right to a veto on all of the important issues. And the High Court will be made up of four judges from each ethnic group. This is much greater equality than is usual in federal states.

DPA: We have already heard accusations regarding who is responsible for the lack of progress in the talks. In fact, your name has been mentioned.

FM Kotzias: We want to achieve a definitive solution of the Cyprus problem, and not create another problem. The problem is the occupation of Cyprus. We don't want there to be guarantor powers, and we don't want to be a guarantor power. The right to intervene in a third country violates international law and the UN resolutions. That is why I made a proposal: the concluding of a Peace, Cooperation and Security agreement. The three countries -- Turkey, Cyprus and Greece -- will be able to jointly confront threats like terrorism and organized crime.

DPA: And if Turkey insists on its rights as a guarantor power?

FM Kotzias: If we allow the system of guarantor powers, we will have committed a folly. In such a case, Russia could come and say, for example: "I want the right of intervention in the Baltic states to protect the Russian-speaking population." This will open Pandora's box. Moreover, what we need is a sovereign Cyprus. Otherwise, Turkey would be able -- through the system of guarantees -- to also have a say in European Union affairs.