Four months after the 1st Mediterranean EU Countries' Summit,  a Greek government initiative held in Athens last September with the aim of enhancing cooperation between Southern European Countries, the leaders of seven EU southern countries will meet again this Saturday 28.01 in Lisbon to coordinate their actions in anticipation of upcoming EU summits. On the table will  the issues of security and defense, economic and social development, migration and refugee flows, Brexit, the arrival of Donald Trump at the White House, as well as be the rise of populism in Europe in view of the critical elections in the Netherlands, France and Germany.

A major focus of 1st Mediterranean EU Countries Summit was the Southern EU countries' call for fostering growth and investment. Besides that, the declaration adopted proposed the following measures: ensuring the internal and external security of Europe, reinforcing cooperation in the Mediterranean and with African countries, promoting programmes for youth mobility and employment and effectively addressing the challenge of migration.

The participating countries stress that they do not want to create an alternative front within the EU. "It is not a separate club, but a contribution to the whole European Union that wants to identify its priorities to relaunch the European project before Brexit," said a Portuguese government source to Portuguese news agency Lusa.

The seven countries intend to "make a concrete contribution" ahead of the informal Malta summit (3 February), the Spring European Council (9-10 March in Brussels), and in preparation of the Rome Declaration, which will mark the 60th anniversary of the signing of the Treaty of Rome on 25 March.

For Greece, the Lisbon summit "will contribute to the European dialogue", irrespective of the "ideologies or political orientations of the participating countries," said a spokesman for the Greek government to French news agency AFP.

Faced with the rise of "nationalism, protectionism, populism and xenophobia", the EU needs "a new cycle of growth and convergence," the meeting's host, Socialist Prime Minister Antonio Costa, said on Tuesday.

Outlining the issues in view of the Lisbon EU-MED Summit, the Portuguese PM, also spoke of the creation of a European Monetary Fund and the extension of the Juncker plan to support investment as well as "positive discrimination” in favor of countries that are hardest hit by the crisis, such as Portugal and Greece.

The meeting next Saturday "will also be an opportunity to reaffirm the confidence of these countries in the European project and the conviction that building a stronger and more cohesive European Union" -of 27 members- is "a priority that responds to the national interest of each member-state".

The Portuguese prime minister stressed that an "incomplete" monetary union, "aggravates difficulties and accentuates asymmetries," and will present to the Summmit a new policy mix that combines the monetary policy of the European Central Bank with the coordination of the budgetary policies of the Member States and the completion of the banking union through the completion of the European Deposit Guarantee Scheme and the creation of an eurozone budget.

The participating countries will also uphold the importance of moving forward with the European Fund for Strategic Investments. "We need European rules, defined within the framework of the Stability Pact, which will help to promote development, instead of block braking public investment", explained to AFP Margarida Marques, Portuguese Secretary of State for European Affairs.

As for security and defense, the leaders of the seven countries will discuss strengthening the EU's external borders through the operation of the European Coast Guard and Frontiers  and promoting security within the EU, in particular against the terrorist threat, but without prejudice to the free movement of enshrined in the Schengen Agreement.

In the field of migration, countries will reaffirm their solidarity with states "particularly affected by the migratory crisis" - Greece and Italy - and reflect on the need to avoid diverting Eastern Mediterranean migration routes to the Central and Western Mediterranean, which implies a "fight against the root causes of migration and cooperation with the countries of origin"  and supporting investment and economic growth in Africa. 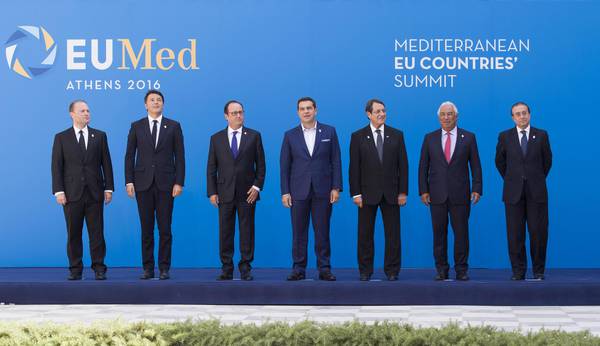