The Greek government is working hard to conclude the second economic adjustment programme review as soon as possible so it can join the European Central Bank's quantitative easing programme in the first quarter of 2017, State Minister and government spokesman Dimitris Tzanakopoulos stressed in response to questions (7.2.2017). Earlier, the spokesman underlined that the government was seeking "a socially sustainable agreement without retreating before the International Monetary Fund's (IMF) absurd demands."

Tzanakopoulos relayed the government's confidence that all the interested parties would soon be undertaking initiatives to conclude an agreement on both a technical and political level, with the Greek government in a central role. "Ahead of the Eurogroup of February 20, it has become apparent that there is a readiness on the part of all involved to undertake initiatives. Our position is that there must be a comprehensive agreement on all issues, so that there is no 'shadow' and we can join the quantitative easing programme," he said.

Tzanakopoulos insisted that the IMF's demand that Greece legislate for an additional 4.5-billion-euros in "precautionary measures" after the end of the programme was unreasonable. "As became apparent from Monday's meeting at the IMF, disagreements exist not just between the IMF and the European institutions but also within the IMF itself," he added. He called on all sides involved but especially the IMF to stop "stonewalling" and noted that the IMF's internal procedures could not lead to further delays in completing the second review. "On our side, there is absolutely no chance that we will agree to the IMF's absurd demands, which are not compatible with the true facts about the Greek economy," Tzanakopoulos said. He also pointed out the contradiction within the IMF's position, which recommended less austerity and lower primary surpluses for Greece, on the one hand, while demanding a new round of pension cuts and a lower tax-free allowance, on the other hand.

The spokesman underlined that “The Greek government can discuss and agree on anything that is socially sustainable and can lead to inclusion in the quantitative easing programme."

The Article IV consultation report on Greece published by the International Monetary Fund on Tuesday evening included letters by Finance Minister Euclid Tsakalotos and Bank of Greece governor Yannis Stournaras, which both outlined their disagreement on certain assumptions and comments in IMF’s debt sustainability analysis (DSA) and ex-post evaluation report. The IMF's economic forecasts on Greece do not reflect the actual picture of the country’s economy, Finance Minister Euclid Tsakalotos stressed:

"The Greek economy is currently moving from a state of prolonged economic crisis to a state of solid economic recovery. Following years of protracted recession, the first signs of robust growth, declining unemployment rate and increasing confidence in the economy have begun to appear and clear signs of changing winds are within reach. With the ESM economic adjustment programme in mid-way, the Greek Government has made significant progress to implement an ambitious and comprehensive reform programme, which will form the basis for a competitive economy in years to come. On top of this, recently agreed short-term debt relief measures will contribute significantly in reducing gross-financing needs and in making debt sustainable. It is, thus, certain, given the recent growth projections and fiscal overperformance being significantly better than expected, that economic stability and enhanced reform efforts are paying off. Against this background, the Staff Report for the 2016 Article IV consultation is welcomed; however, despite evidence and the analysis presented, we observe that the report fails to do justice in several areas, while many of the conclusions made are not consistent with recent and well-documented empirical evidence..."

“Firstly, the report presents an overall picture of (Greece’s) reform effort which is not representative of the actual effort made by the Greek government during the ESM program. The implementation of structural reforms accelerated significantly, particularly of deep reforms, such as the consolidation of pension funds into a single fund, the overall pension reform, the creation of an independent tax authority, many product market reforms (including significant progress in the introduction of OECD recommendations) and a wide-ranging reform program,” Tsakalotos writes.

Concerning budgetary developments, Tsakalotos said initial indications show that the budget surplus for 2016 will be around 2 percent of GDP. “Despite important budgetary over-performance, the IMF analysis does not proceed in a major revision of budget surpluses for 2018 and beyond, remaining at the forecast for 1.5 pct, despite the overwhelming evidence to the contrary,” he streesed. Aside from the need for budget revisions, the significant budget surplus in 2016 questions three important arguments in the report, Tsakalotos continues. “The most important argument, that Greece cannot maintain high budget surpluses above 1.5 pct of GDP, contradicts recent developments.”

The president of the S&D Group in the European Parliament Gianni Pittella met with the Greek Alternate Minister of Foreign Affairs, George Katrougalos, with whom he discussed in detail the current situation in Greece (7.2.2017). Following this meeting, Gianni Pittella said: “We recognize Greece’s enormous efforts and sacrifices in the last years. We underline the need to conclude in the coming days the second program review in respect of the European standards and acquis. “Greece’s creditors and EU Institutions must accept an agreement that will help the country and gives stability and perspectives... The requests put forward by the International Monetary Fund (IMF) for additional measures that the Greek government should take in advance of the 2019 budget are unacceptable and could negatively impact Greece's political stability and damage its economic prospects.”

The Greek programme review will soon be concluded as there are not many open issues, Economy and Development Minister Dimitris Papadimitriou said on Wednesday, 8.2.2017 in an interview with Naftemporiki newspaper. Asked on the dangers of the delay, he said "I have founded reasons to believe that the programme review will be concluded without repercussions on the country."

Commenting on the ongoing negotiations the Financial Times stress that "Athens would in all likelihood need to accept to pre-legislate some policy measures, the IMF would need to accept that the scale of these measures will not be as much as it originally hoped, and Berlin would need to, at the very least, moderate its demands for how long Greece must sustain the 3.5 per cent primary surplus target after 2018. Germany would also have to provide more clarity now on future debt relief..", while Mark Gilbert argues in BloombergView that "Wrangling between the International Monetary Fund and the European Union threatens to prevent a bailout deal by the time euro-region finance ministers gather in Brussels on Feb. 20. Both sides should acknowledge the efforts Greece has made to boost tax revenue, sell off state assets and return the economy to growth. The EU should sign off on the next aid payment, paving the way for Greek bonds to be considered for the European Central Bank's bond-buying program..." 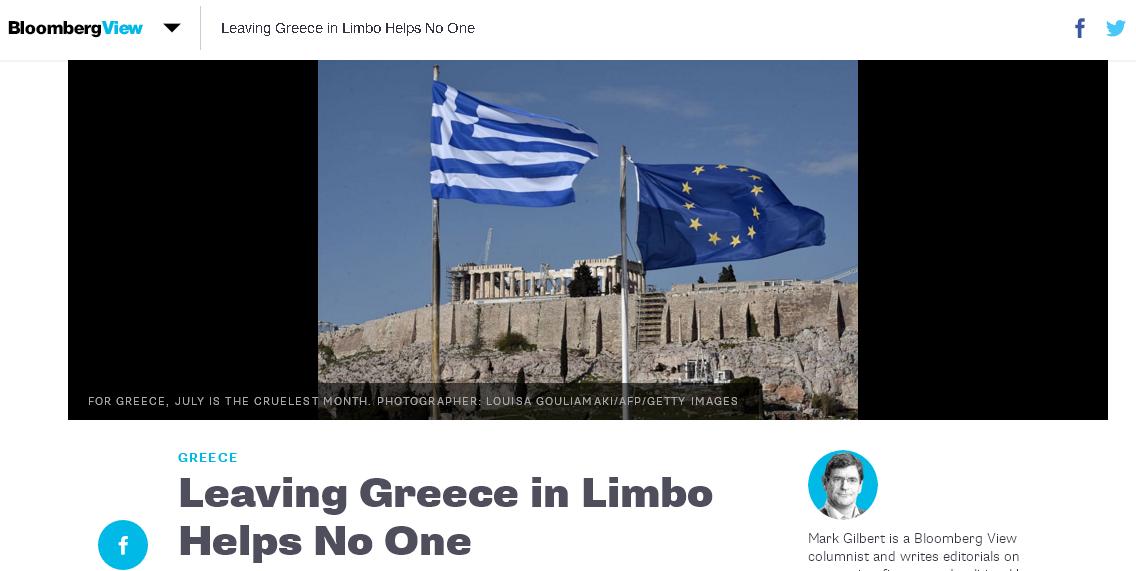