Alexis Tsipras: Europe cannot improve if it is not progressive, democratic and social 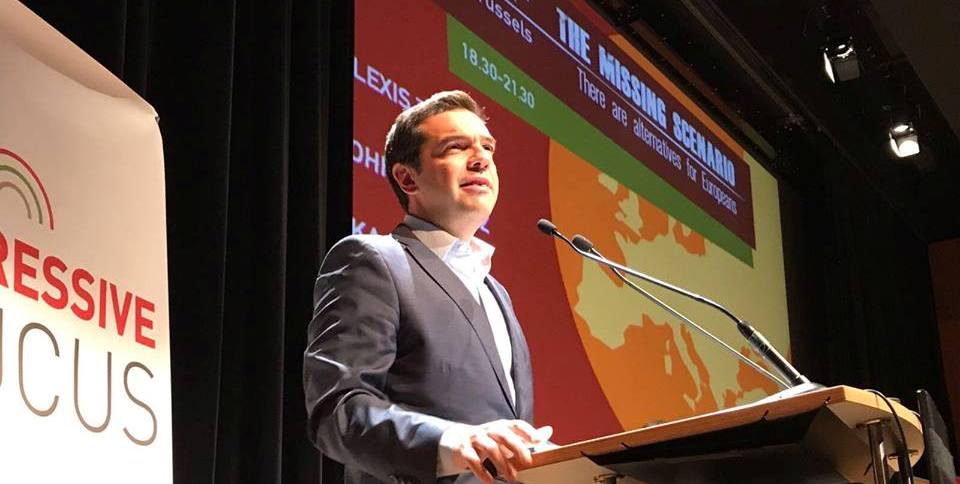 Europe cannot improve if it is not progressive, if it doesn't become democratic and social, Alexis Tsipras said on Wednesday 21.6.2017, addressing an event titled "The Missing Scenario - An Alternative for Europeans," organised in Brussels by the Progressive Caucus, a space of dialogue, established by progressive MEPs of different political groups (Progressive Alliance of Socialists and Democrats, the European Left and the Greens) in the European Parliament.

Commenting on Greece's path, Alexis Tsipras said: "Greece has reached the point of return to normality and growth - the point where the exit from the memorandum of austerity is visible. Since January 2015, we defended the sacrifices of the Greek people and particularly, of the poor, the low-income and the unemployed." He said the government's choice from the beginning was not to risk crushing Greece, not to discredit left-wing ideology in Europe. "We do not embrace austerity policies. We have never stopped implementing a parallel program that protects the most vulnerable."

The social democrats must face their historic responsibilities and limit the neoliberal consensus. "Europe’s heritage is calling for vigilance. Britain's rejection [of the EU] in the framework of euro-skepticism and the rise of the extreme-right are signs of a loss of confidence," he argued, noting it is worth giving this fight together. He stressed that for Europe to become more democratic, the countries should at least abandon ideas that are beyond the treaties such as the failed idea of the core Europe because a divided Europe will be a weaker Europe and we should proceed with a social deepening". 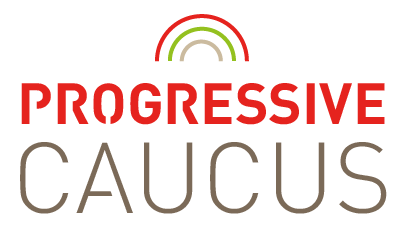 Other speakers of the event included Paul Magnette (Minister-President of Wallonia), Ska Keller (Co-chair of the Greens/EFA group) and Benoît Hamon (Candidate to the French Presidential Election 2017). The three Presidents of the Greens, European left (GUE/NGL) and S&D groups also intervened shortly at the beginning of this discussion.

Among friends that we have been sailing a common course for so many years. A few times in very difficult circumstances, but always struggling with hope for a better Europe.

And we have gathered today, old and new friends, bound by the duty of history. To open a sincere discussion and try to find a common space for the progressive Europe of today and tomorrow.

And all of us, irrespective of our ideological foundations and differentiation,forces from the radical Left, socialists, social democrats and ecologists, we have a common political interest and a shared goal: to change Europe. To have a democratic, social and ecological Europe in the place of today’s Europe of social insecurity and fear. This is why the Progressive Caucus is a reference point for all of us. And this is why it has a political role that far exceeds the simple arithmetic behind the political forces that participate in it. And your acts of solidarity to Greece, during the long and difficult process of negotiations with the neoliberal establishment in Europe, is a sign that we are not in a forum of bystanders.

Greece has reached, at last, the point of return to normality and growth. The point where the exit from the Memoranda of austerity is visible, clear and irreversible. After the last week Eurogroup agreement, this point has specific date - and this is next summer. The summer of 2018.

But the return to normality has not been a normal process itself. Because, since January 2015 when the Left came into office, we have been governing the country under conditions of constant financial blackmail by the creditors.

But our political choice has been clear, consistent and firm throughout those years: not to risk blowing Greece to pieces. Not to risk discrediting the Left in Europe.

This is why, at no point did we agree to assume the ownership of the austerity policies. This is why we never stop fighting to implement, at the same time, a parallel program that protects the most vulnerable people. This is why we never compromise with the idea that a democratically elected government has no right to legislate on its own, of course in the framework of common agreements, but with its own choices.

So we strongly defended the sacrifices of the Greek people - and particularly, of the poor, the low-income and the unemployed. And we never even think to escape for the political responsibility that Greek people entrusted upon us.

We never even think to surrender them to those in Greece who represent the interests of the most corrupt of the oligarchy and promise a future of endless austerity, social insecurity and unemployment. And let me say that now after so long time from the difficult July 2015, it is the first time that we are felling vindicated for our choice to stay and fight.

By creating alliances in the European framework, by negotiating tough, by trying to open windows of hope in the darkness of the European establishment.

At a time that neoliberalism has captured Europe, none spares in the struggle to change Europe.

We need the participation of all the democratic and progressive forces which want to be part of that struggle, without excluding anyone, the Left, the ecologists, the social democrats. And the social democrats need to measure up to their own historical responsibility and put an end to the neoliberal consensus.

We need popular awakening and action to put an end to the Europe of mass unemployment, explosion of poverty and inequalities, social dumping and low public investment. The economic and social legacy of the European crisis points in the direction of action.

The status quo in Europe, which has been rejected in the British referendum, remains the main source of Euroscepticism and of the rise of the extreme right.

The EU, as it is today, does not inspire and does not attract.

And inaction means, sooner or later, implosion. We need to organize the end of an era for Europe. By putting forward a realistic political plan for a Europe «ever closer» to its citizens. By reconnecting European integration to its own founding principles of democracy, equality and solidarity.

The democratic, social and ecological re-foundation of Europe is the only way out. And this is a struggle worth fighting for and worth asking for the collective endeavour of all progressive forces.

A few days ago, after a failure Summit of G7 in Bari, Angela Merkel stated that Europe «must take its fate into its own hands». But for that to happen, the fate of Europe's peoples should be common. And that fate cannot be common when a «wall of money» divides Europe's South from Europe's North. When the economic and social distance among the European Union member-states, widens and inequalities within European societies grow. When the fate of a generation is determined by German-inspired austerity and by a state of exception in the European social and labor acquis. Or it is determined by geography, when it comes to the management of the refugee crisis.

Europe will take its fate into its own hands only when its peoples take Europe into their own hands. When Europe becomes a matter of its own citizens - not of a few technocrats. When Europe becomes a matter of democracy for all. And when it can manage its own parallel crises - the economic, the refugee, and the security crisis - collectively and effectively. And for that to happen, we should, at least, abandon ideas which are beyond the Treaties, such as the failed idea of the «core» Europe.

Because a more divided Europe will be a weak Europe. And we should proceed with economic and social deepening. That is, with the democratization of the Eurozone and a strong and legally-binding European Pillar of Social Rights. So that political decision-making shifts from non-institutional, inter-governmental bodies, such as the Eurogroup, to European institutions with democratic legitimacy. This is why, for us, democratizing the Eurozone does not mean maintaining the status quo with a fig leaf of legitimacy. In the contrary it means reforming the status quo. With a new structure of governance subject to democratic legitimacy and accountability. With economic and fiscal policy coordination geared towards growth. With fiscal risk-sharing, including the issuance of Eurobonds, and prevention of fiscal and social dumping.

For us, democratization of the Eurozone means a new beginning for Europe. And this new beginning it is now more necessary than ever. It is necessary, it is urgent but also it is possible if we join forces. If we work together. It is down to us to create it.